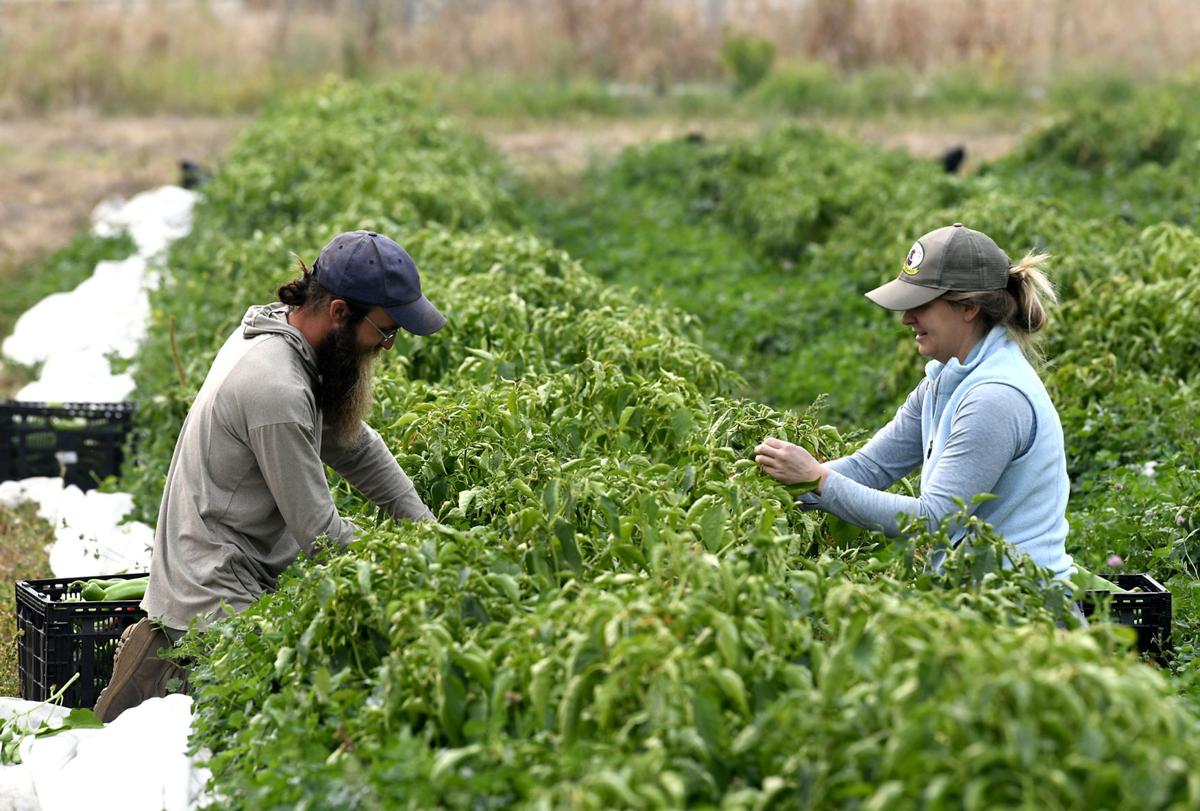 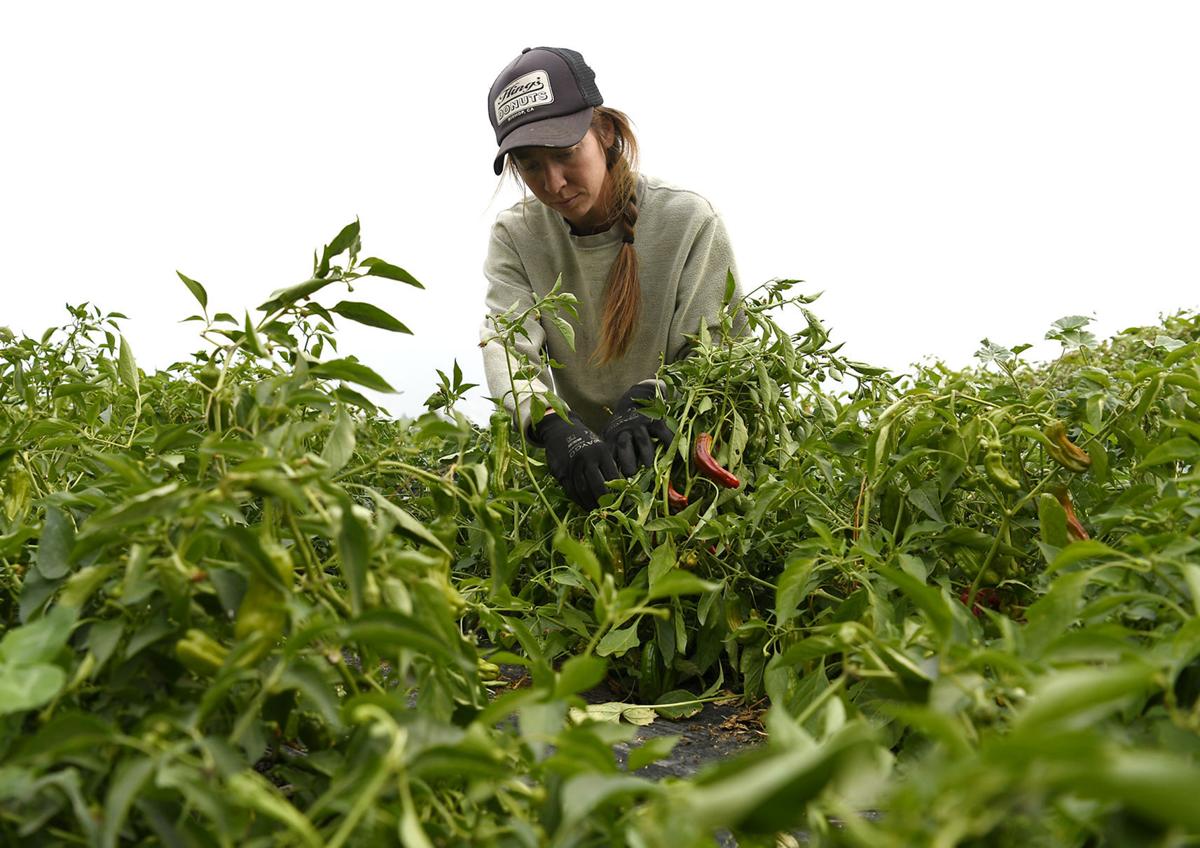 ARLEE — The smoky air hasn’t stopped the farm workers at Harlequin Organic Produce from harvesting vegetables that will end up on kitchen tables all over western Montana.

On Monday, the crew was busy picking peppers and melons for their Community Supported Agriculture (CSA) share program, which has exploded in popularity during the pandemic.

“Our CSA program started at 250 customers this year and ended at 450,” explained Kaly Hess, who co-owns the operation with Brian Wirak. “I think with a year like this, people are obviously cooking a lot more at home and not going out to restaurants. Local agriculture sees a lot less hands from harvest to sale. They probably see that.”

Harlequin’s CSA program delivers customizable crates of vegetables and fruit to locations all over Missoula, and people can pick and choose what they want each week or put deliveries on hold. Hess and Wirak employ eight people and said their workers are able to live on the farm. The smoke doesn’t stop the harvest, however.

“We can adjust the timing of a lot of things, but not the CSA deliveries,” Hess explained. “Today is kind of our first day of it being pretty bad with the smoke. I’ll check in with everybody. Our work is pretty slow-paced, so we’re not really ever breathing heavily.”

Like people in the construction and restaurant industries, along with tens of thousands of other workers in Montana, the smoky air doesn’t mean work stops. Climate change caused by the burning of fossil fuels has helped fuel a season of huge fires in the western United States, and the smoke from those fires is moving like a massive blanket over western and south-central Montana.

There’s no relief in sight until possibly the end of the week, explained Missoula County air quality specialist Sarah Coefield.

“The smoke is coming in all in a continuous stream from Oregon and California fires, and we’re going to continue to see smoke for the next several days,” she said. “There’ll be no significant pattern shift until the end of the week. We won’t see much clean air during this week.”

She said there is a possibility that the upper level winds, which are driving the smoke from the southwest and west, could shift to blowing in from the northwest on Friday night and Saturday. However, there’s no guarantee that will happen. There’s also rain forecast for Saturday, but Coefield said that by itself won’t really help clean the air here unless it rains on the fires in California and Oregon.

“When that low pressure system swings through, it may deliver cleaner air, but that’s not going to come until maybe Friday and Saturday from what I’m seeing,” she said. “Rain here doesn’t really impact the air quality.”

She also said that even a bit of weather won’t stop the fires long-term.

“We could be right back to getting Oregon smoke by Sunday night,” she said.

In her air quality email update Monday, she noted the Bitterroot Valley will be lined up with the plumes from Idaho wildfires this week too, so people there will get the triple whammy of smoke from Idaho, Oregon and California.

In the meantime, Coefield recommends that people stay indoors as much as possible. Smoke from wildfires contains very fine particles that infiltrate the lungs and even the blood stream, causing inflammation and exacerbating pre-existing health conditions like asthma and chronic obstructive pulmonary disease (COPD). Coefield said smoke increases the risk of heart attacks and hospitalizations from things like pneumonia. Children, the elderly, pregnant women and anyone with diabetes, high blood pressure or other health conditions should be especially wary of spending too much time outdoors.

“Right now air quality is ‘Unhealthy', and that means it’s bad for everyone,” Coefield explained. There are only two levels of worse air: Very Unhealthy and Hazardous, according to the Montana Department of Environmental Quality.

She said indoor HEPA filters, or even modern box fans attached to high-efficiency furnace filters, can clean indoor air. She cautioned that many people believe that air-conditioned air is cleaner because it’s cool, but only air filters will clean air indoors. She said it’s especially important to have air filters in one’s bedroom because that’s where people actually spend most of their time at home.

A wide-ranging plan — incorporating everything from the adoption of energy efficiency standards for utilities, replacing aging mobile homes with newer ones, and creating regional "innovation clusters" — to help Montana deal with climate change was released Wednesday by Gov. Steve Bullock.

Six months into the COVID-19 pandemic, with no end in sight, Mayor John Engen proclaimed it’s time to shop small.