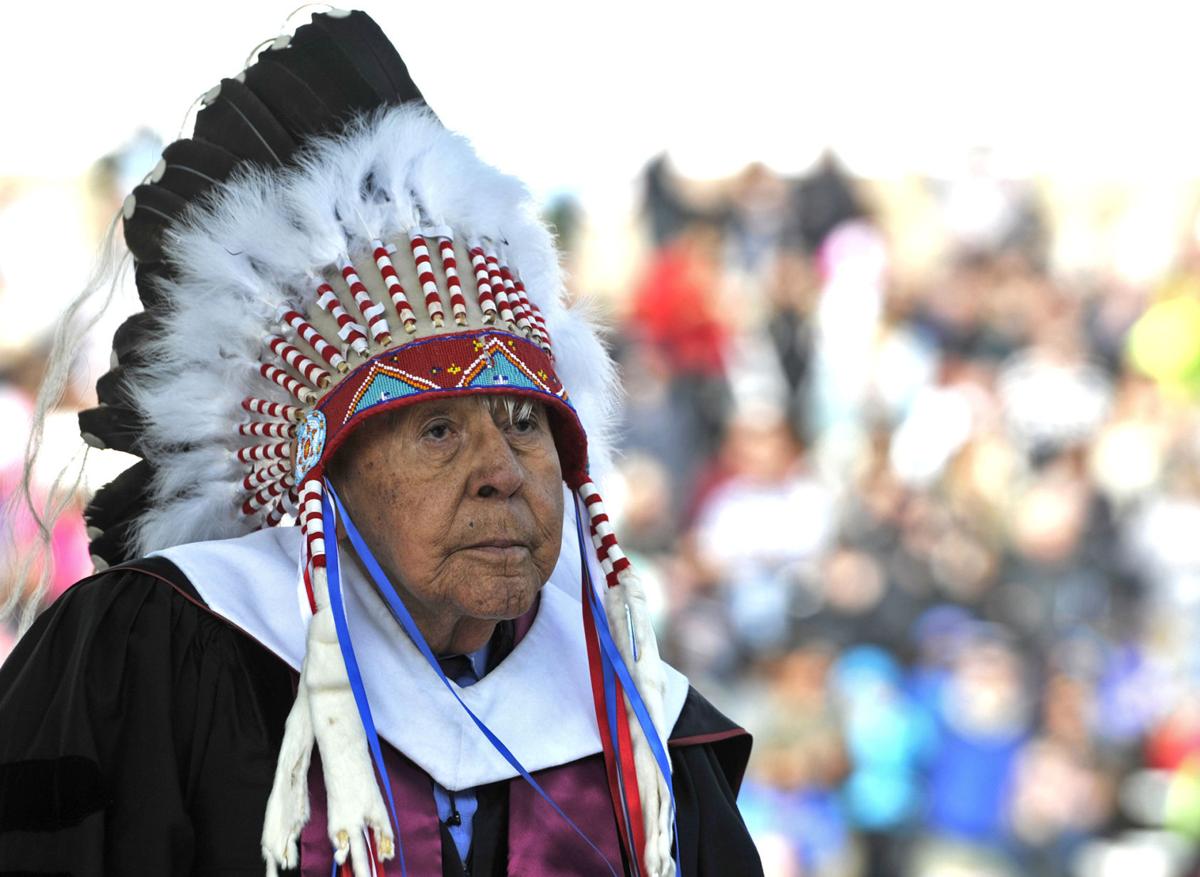 Earl Old Person attends the University of Montana commencement in 2016. 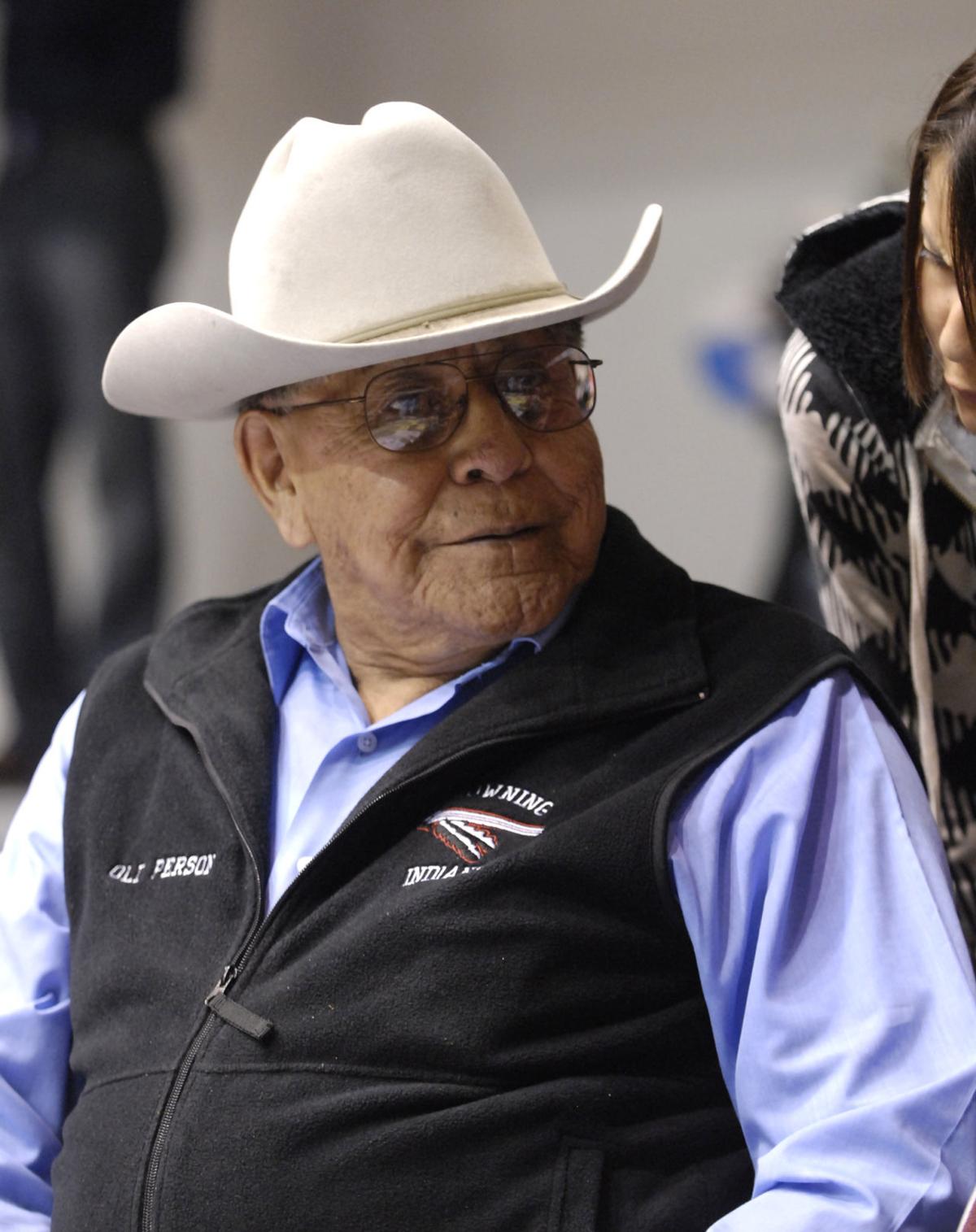 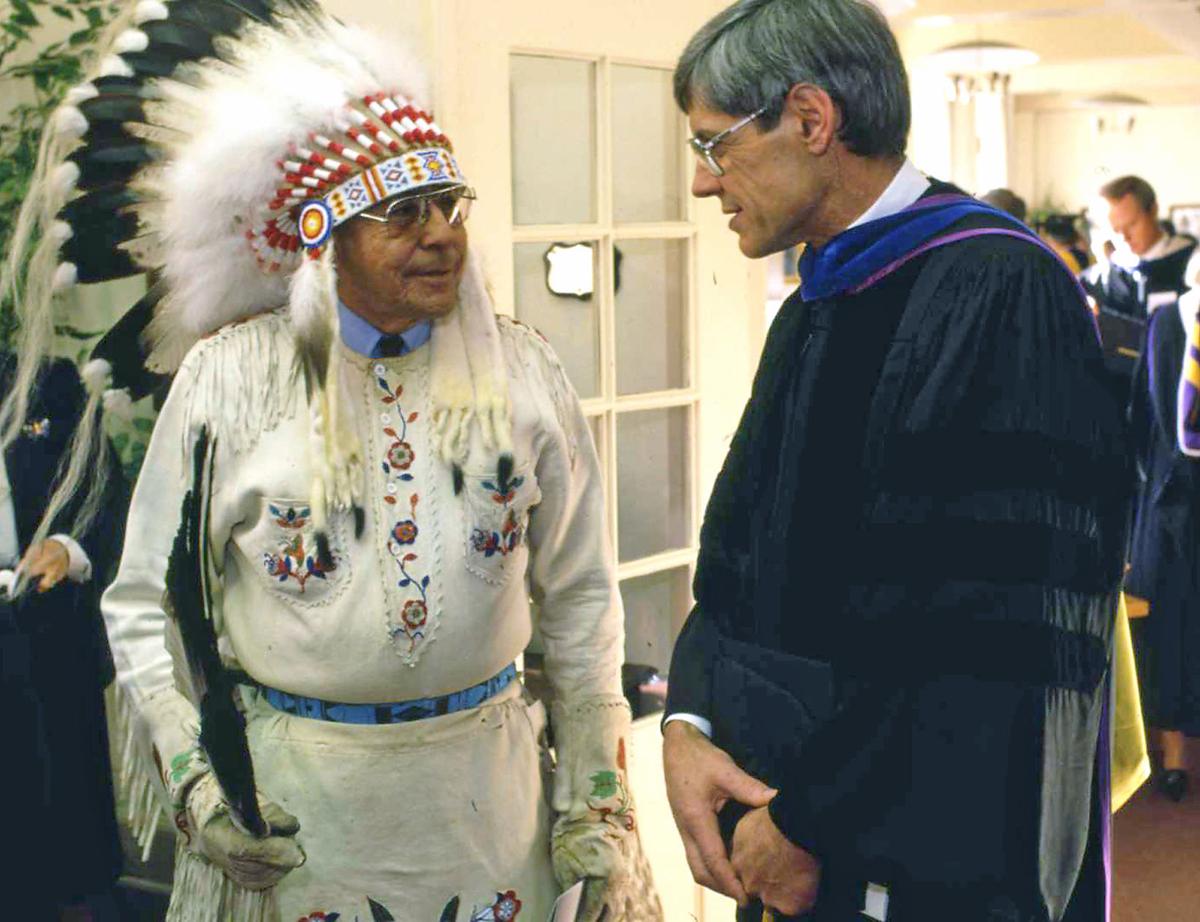 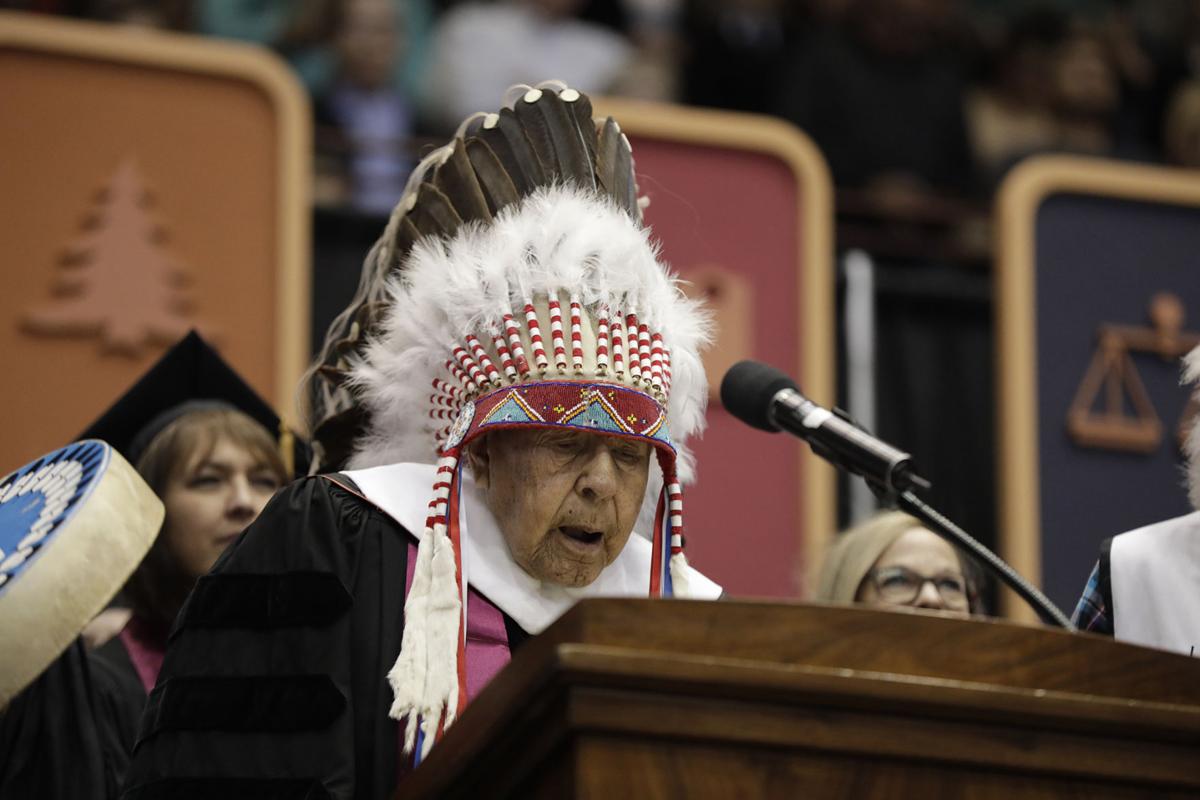 Earl Old Person speaks at the University of Montana commencement in 2019. 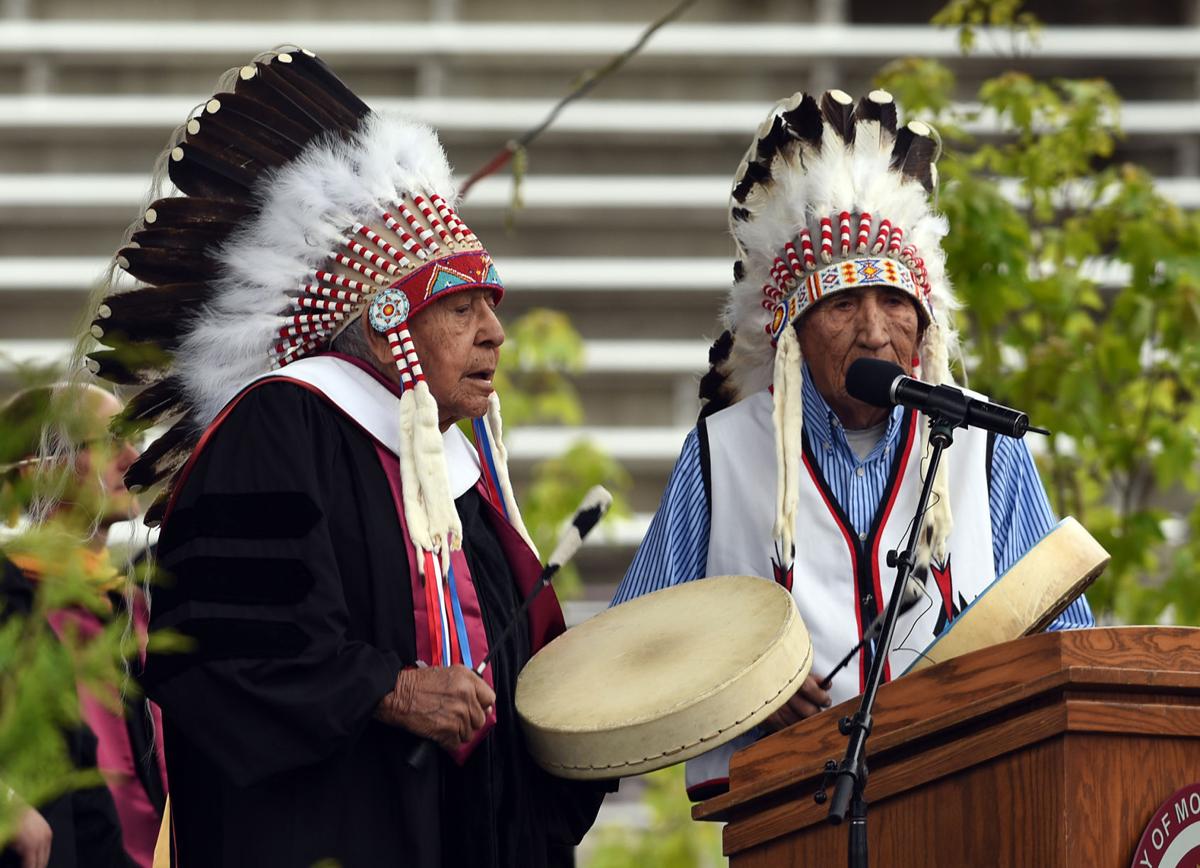 Earl Old Person, left, sings with the Rawhide Singers of the Blackfoot Nation at the University of Montana commencement in 2015. 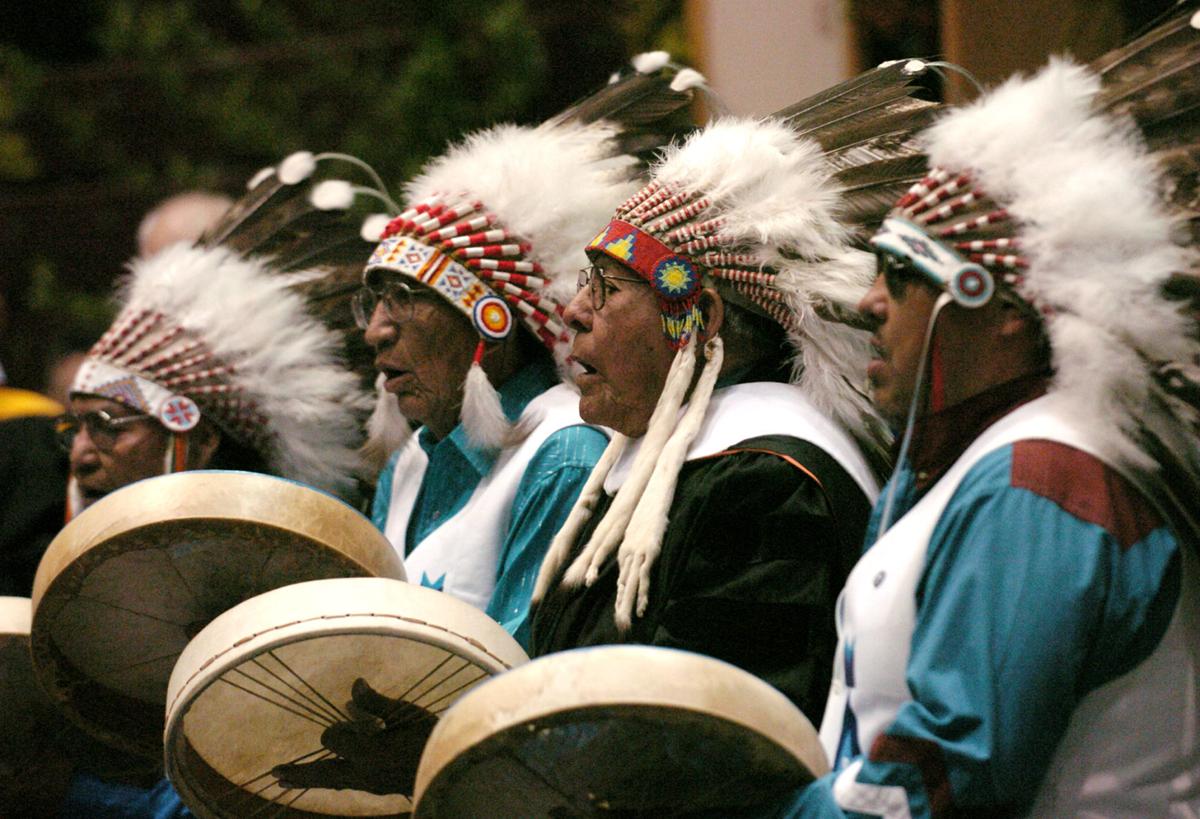 Earl Old Person sings with the Rawhide Singers in 2005. 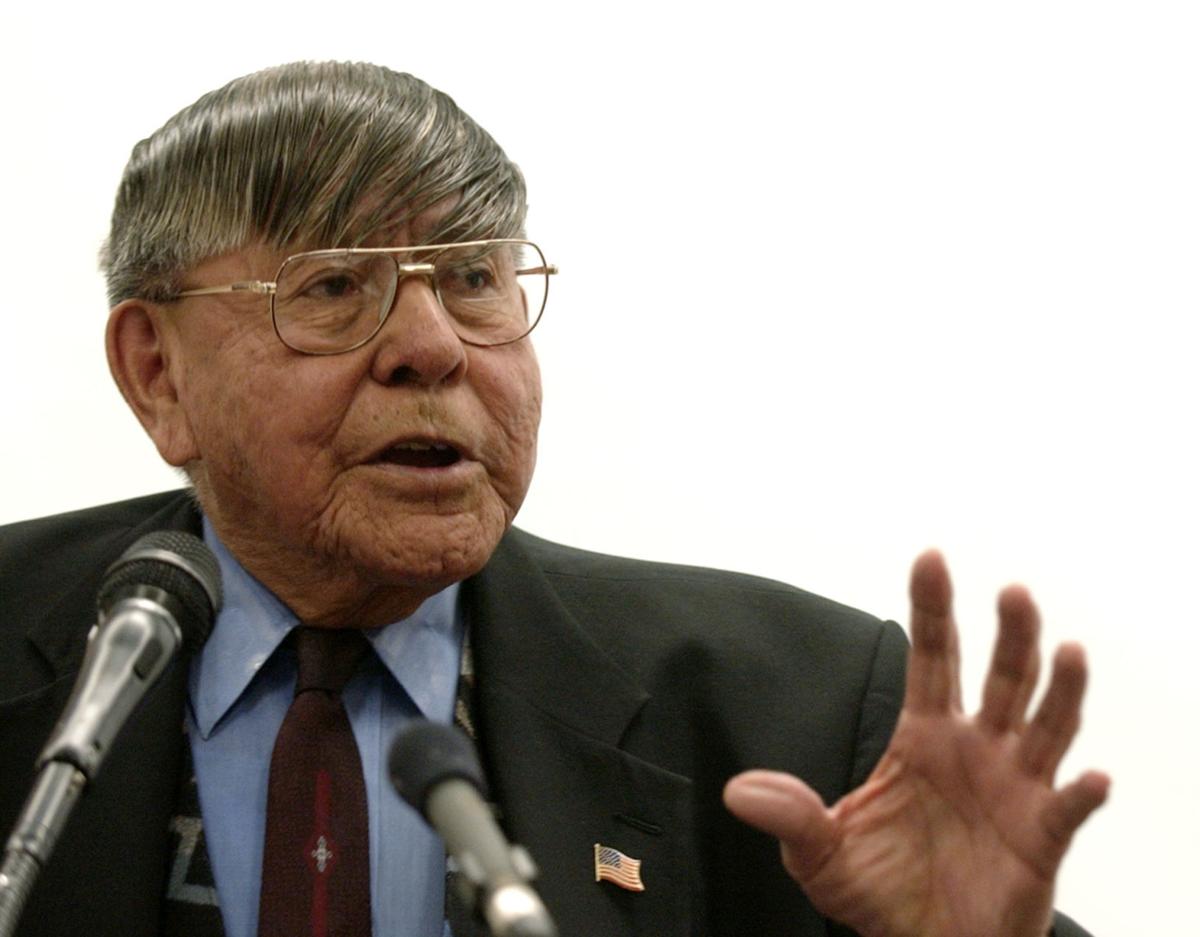 Earl Old Person, traditional and political leader of the Blackfeet Indian Tribe who served longer than any head of state except Great Britain’s Queen Elizabeth, died on Wednesday. He was 92.

“He met every president since Harry Truman up through Barack Obama. He didn’t get a chance to meet Donald Trump because he was starting to become ill. But he had an association with Joe Biden when he was a senator.”

Old Person’s cause of death was cancer.

Old Person was first elected to the Blackfeet Tribal Council in 1954, and served as its chairman from 1964 through much of the next half-century. He was also traditional chief of the Blackfeet Tribe, filling a role with more cultural and social duties.

“As head of the Blackfeet Nation, he’s had a very influential relationship with every family on the reservation through the years,” Murray said. “They called upon him for different personal family issues, traditional issues, he was able to fulfill that role. Whenever there was an event, he was the first person to call — well let’s get Earl, and he would always be there.”

For example, Old Person sang an honor song last May for the University of Montana graduates of 2021 — twice due to pandemic-imposed crowd size limitations — marking his 26th consecutive commencement appearance. Over those years, he celebrated the educational accomplishments of about 40,000 students.

“He was 91 and had driven down by himself,” UM spokesman Dave Kuntz said. “He did both the morning and afternoon ceremony, and was here for a full eight hours. He’s always been a champion for the university and for Blackfeet students. There’s a definite correlation between the number of students and the strong pipeline that’s been built by him.”

UM awarded Old Person an honorary doctorate in 1995 and endowed a $5,000 annual scholarship in his name.

“The entire University of Montana community feels deep sadness at the loss of Chief Earl Old Person," UM President Seth Bodnar said on Thursday. "He not only led the Blackfeet Nation with wisdom and grace but also had a tremendously profound impact on the Griz family. The weight of this loss will last. We are all better for having been influenced by him.”

The American Civil Liberties Union gave Old Person its Jeannette Rankin Civil Liberties Award in 1998. State ACLU Director Scott Crichton called him “a man of integrity, intelligence and wisdom … Few others have fought so consistently for tribal sovereignty and the protection of Indian rights than has Chief Old Person.”

Born in 1929 near Starr School, Old Person became a public face for the Blackfeet Tribe as a young man. A 1947 Missoulian story noted he represented Glacier Park Boy Scouts on a trip to France for a world jamboree. Several stories in the 1950s recorded his participation in efforts to improve conditions on reservations and challenge federal policies. In particular, he pushed a national effort trying to get Indians working for the Bureau of Indian Affairs and served as head of the National Congress of American Indians from 1969 to 1970.

The Blackfeet Indian Reservation underwent major changes during his tenure. It opened the Blackfeet Community College in 1974, which now has 2,240 students and a staff of 60. He supported the Museum of the Plains Indian in Browning, as well as the new Iinnii Buffalo Spirit Center that highlights the Tribe's expanding wild bison herds.

Old Person was also a living archive of Blackfeet traditional songs and practices.

“He had heard those songs when he was a kid, and he could remember those songs,” Murray said. “When we went through the cultural losses in the 1950s and ‘60s and early ‘70s, Earl was able to retain all that. He stayed real close to the culture. People went to him all the time for advice and historical perspective. He had so much knowledge as a principal keeper of the Blackfeet way.”

He was also extensively involved in state and national politics, starting with a close friendship with Montana Sen. and Senate Majority Leader Mike Mansfield and then Sen. Max Baucus. He met numerous foreign dignitaries, including one memorable encounter with the Shah of Iran, who broke a 2,500-year-old protocol by standing up when Old Person asked him to during a ceremony in Tehran.

Back home, Old Person was an active rancher and backer of athletics. The Montana Athletic Indian Hall of Fame inducted him in 2007, and he was honored by the Montana Cowboy Hall of Fame in 2014. He was father to six children and stepchildren, as well as a father figure to numerous other children, according to nephew Terry Tatsey.

Political leaders throughout Montana paid tribute to Old Person shortly after news of his death broke on Wednesday evening.

“I was saddened to hear the news of Chief Earl Old Person passing away,” Sen. Steve Daines wrote on Wednesday. “He was a great Montanan and a great American. My prayers are with his family, friends and the entire Blackfeet Nation. It was an honor to know him.”

“Today, Sharla and I mourn the loss of a great man and a dear friend, Chief Earl Old Person,” Sen. Jon Tester wrote on Wednesday. “Chief Old Person was a fierce advocate for the Blackfeet Nation and all of Indian Country for his entire life, and the world is a better place because he was in it. He will never be replaced, and we are holding his loved ones and the Blackfeet people in our hearts.”

Gov. Greg Gianforte followed on Thursday morning, noting that Old Person “put others before himself to serve a greater good.”

“Chief Old Person dedicated his life as a tireless advocate, educator, storyteller, and song singer not only for the Blackfeet people, but also for our state and nation,” Gianforte wrote. “His legacy will live on for many generations. Our prayers are with Chief Old Person’s family, friends, and the Blackfeet Nation.”

Plans for commemorating Old Person’s passing were still in development Thursday, according to Tribal spokesman James McNeely. The Blackfeet Tribal Business Council has ordered flags to half-staff from Thursday until his internment, which has not been set. In Browning, residents were raising tepees in All Chiefs Park in memorial to Old Person.

“He can’t sing for us anymore,” Murray said. “It’s just a great loss.”

While the impact and loss from the coronavirus pandemic across the country cannot be understated, its toll on Indian Country represented more — a direct threat to the preservation of Indigenous ways of life.

COVID, courts and cold: Montana's Indian Country faces challenges to get out the vote

The memorial service for Old Person commences on Friday morning at the high school, followed by interment near Starr School outside Browning. For coverage of Friday's services, see Saturday's Missoulian or visit Missoulian.com.

Earl Old Person attends the University of Montana commencement in 2016.

Earl Old Person speaks at the University of Montana commencement in 2019.

Earl Old Person, left, sings with the Rawhide Singers of the Blackfoot Nation at the University of Montana commencement in 2015.

Earl Old Person sings with the Rawhide Singers in 2005.