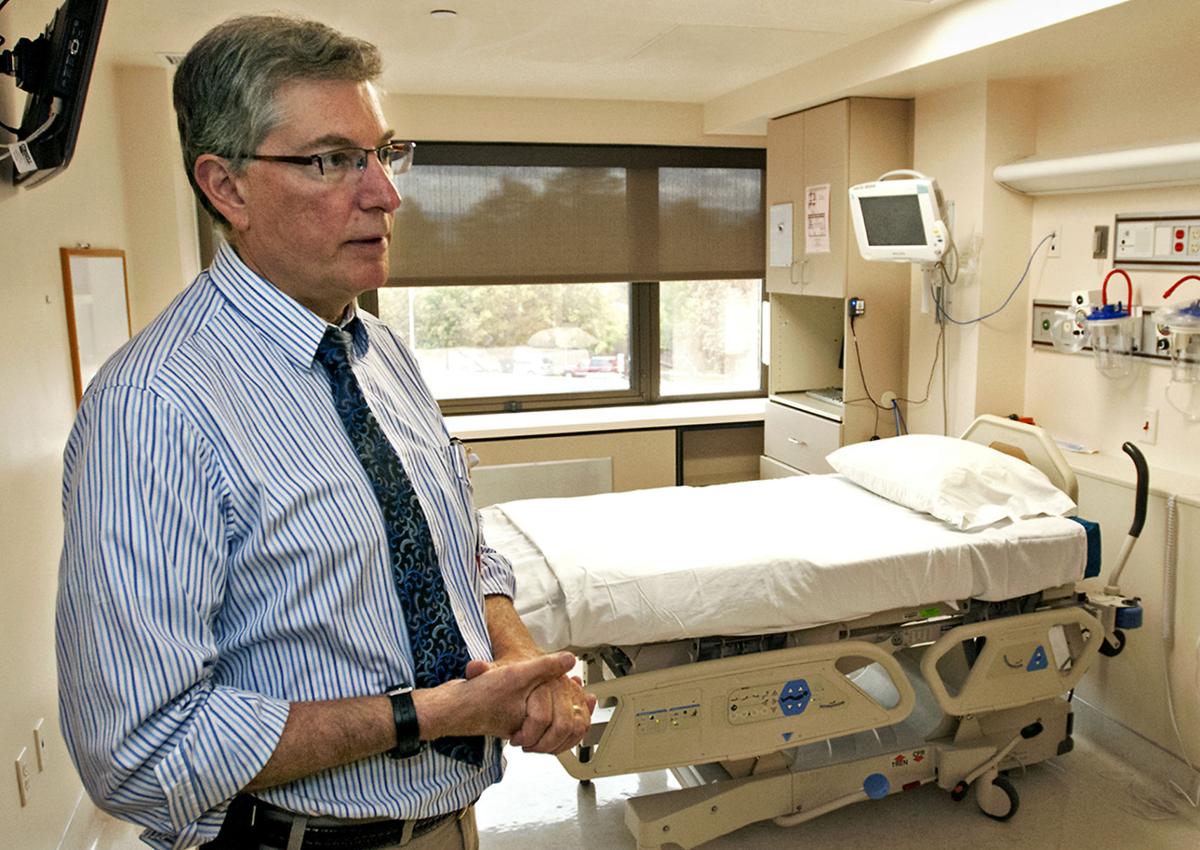 Dr. George Risi, an infectious disease specialist, shows one of St. Patrick Hospital’s three rooms that are equiped to handle infectious diseases like Ebola on Monday. St. Patrick has had the isolation wing of its intensive care unit since 2007, and is one of four facilities in the United States set up to care for patients with Ebola. 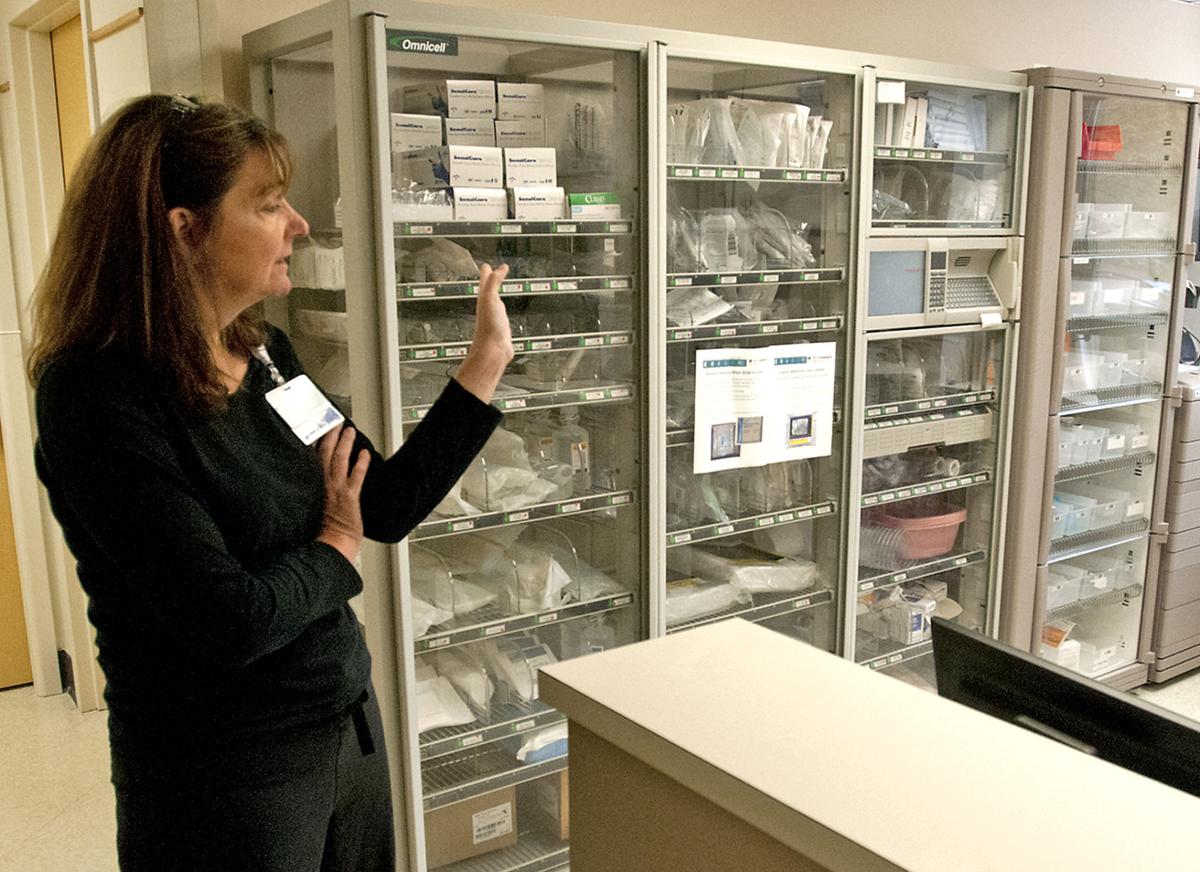 Kate Hurley, St. Patrick’s intensive care nursing director, describes how the isolation unit’s nursing station is self-contained with supplies and drugs that might be needed. Hurley and Dr. George Risi recently helped a clinic in Sierra Leone that cares for Ebola patients.

There are four places in the United States set up to handle a patient sickened by the Ebola virus, and Missoula is one of those.

St. Patrick Hospital administrators have no notice about when or if they will be asked to care for someone stricken with the disease that’s killed more than 3,000 people in Africa in 2014. But the hospital has a special wing of its intensive care unit with three rooms modified to safely handle infectious diseases like Ebola.

“We may never get a patient, but we may someday,” said Carol Bensen, St. Patrick’s senior director for critical care. “We want to help alleviate the rumor mill by making people aware of what we offer. We deal with tuberculosis patients fairly often and nobody expects a press release. We care for lots of different diseases here.”

And any hospital equipped to care for a tuberculosis patient can care for an Ebola patient, according to Dr. George Risi, an infectious disease specialist who recently returned from spending 20 days in a Sierra Leone Ebola ward. Accompanied by St. Patrick’s intensive care nursing director Kate Hurley, Risi helped local clinic staff care for up to 95 patients at a time. While untreated Ebola kills more than 70 percent of its victims, more than half of those who made it to the clinic recovered.

“It’s a disease to be respected, but not feared,” Risi said. “It’s similar to the HIV-AIDS time, when there was this fatal disease and we didn’t know how it was transmitted and people were afraid to touch a patient. We know how to treat Ebola. And this is a cutting-edge center of excellence for a lot of things – for cancer treatment, for cardiac surgery and for infectious diseases as well.”

The “care and isolation unit” of the hospital occupies one hallway of its intensive care unit. It has a set of hallway doors that can close to keep out other hospital traffic. Each room has an anteroom – a double-doored chamber where medical staff can put on or take off their personal protective gear before tending to the patient. The double doors also preserve negative air pressure inside the patient’s space, so air is always being sucked into the room instead of floating out.

Inside the room, more complicated air circulation and filtration systems blow air from the ceiling across the patient and staff and into filters that remove any infectious organisms before release to the general atmosphere on the hospital roof. Otherwise, it has the usual equipment needed for critical care: ports for administering breathing oxygen and medicines, draining fluids and related treatments. Outside, a separate nursing station has all the regular ICU medicines, equipment and supplies.

The three rooms are qualified to handle Level 4 safety concerns. Level 1 has protection against things generally not dangerous to healthy people, like brewer’s yeast. Level 2 is the safety margin of the standard hospital microbiology lab, where clinicians test for routine diseases like chicken pox or staph infections.

Level 3 spaces can handle infectious diseases spread by air, like influenza, bubonic plague or yellow fever – that have known cures. Level 4 units are for exotic agents that may or may not have cures available, or appear in highly concentrated or modified forms from a research institution.

And that’s why St. Patrick has a care and isolation unit. The federal Rocky Mountain Laboratories in Hamilton deals with those kinds of substances on a daily basis, and has done so for years. Some of its researchers are on the forefront of developing a vaccine for Ebola, and have worked with many other unusual disease organisms.

The other U.S. sites cleared for Ebola treatment are in Bethesda, Maryland; Atlanta; and Omaha, Nebraska. The U.S. Centers for Disease Control have deployed teams of health workers to numerous sites in West Africa to slow the epidemic’s progress. U.S. military personnel have also been sent there to build hospital clinics, although Risi said those people would not be performing any care or have contact with Ebola patients.

The CDC reports no confirmed Ebola cases in the United States as of Sept. 29. Affected countries include Guinea, Liberia, Sierra Leone, Nigeria and Senegal. A separate Ebola outbreak has been reported in the Democratic Republic of Congo.

Hurley said in addition to the physical facilities, St. Patrick staff have workshops on Level 4 safety practices every six months along with regular drills. She and Risi just returned Friday from a trip to Cuba, where they trained about 200 nurses and doctors in safe clinical procedures for working in an Ebola ward. Those Cuban medical personnel are due to leave for Africa, where they will put the training to work.

“When we started putting them through the PPE (personal protective equipment) exercise, everyone was excited, trying to be first in line to try on the gear,” Hurley said. “But then they’d get it on and start moving around for 30 or 40 minutes and realize – this is kind of tough.”

Ebola clinic staff must wear full-body protective suits including complete face shields. Hurley said the hardest thing for her to get used to was the condensation that would fog over the mask, limiting her vision to the places where sweat had trickled down.

“You can’t touch your face,” Hurley said. “You can’t move your hands above your shoulders. You can’t sit down. And you stay in this for three or four hours at a time. It got to be all about the hydration.”

Hurley said clinicians used a buddy system to check that gear was worn properly, procedures were done carefully and no one was getting too tired to work competently.

“We got really good putting it on and taking it off,” she said of the clothing. Protective suits are disposed of after each use.

While no vaccine for human use has been approved for Ebola treatment, Rocky Mountain Labs researchers have moved very close to a possible formula, Risi said. The goal is to have a medicine that gives health workers advance protection against the virus or, equally important, that could take effect within a few hours or days after exposure.

There are also other treatments that degrade the virus’ ability to multiply or attack the body, some of which have been successfully used on patients brought back to the United States. And some Ebola victims can survive if they’re given fluids and other treatments long enough for their bodies to develop their own antibodies. Such treatments have been available since the 1960s, when they were used to stop a similar disease outbreak in a research lab in Marburg, Germany.

“We know that even with the regular support any Western hospital can provide, we can treat Ebola,” Risi said. “Just with IV fluids and electrolytes and clotting control, we can reduce the mortality rate from 70 or 80 percent down to 30 or 40 percent. We don’t need to talk about exotic treatments.”

The St. Patrick care and isolation unit can be used as a regular part of the ICU when it’s not needed for an infectious disease patient.

Official: Missoula will be notified if hospital gets Ebola patient

The Missoula public should be notified if their local hospital will receive a patient with Ebola, state and local health officials said Wednesday. “That would indeed be considered newsworthy,” Montana Department of Public Health and Human Services communicable diseases bureau chief Jim Murphy said from Helena. “It would be like the first flu cases arriving in the state, where we use the opportunity to remind people to get vaccinated and take precautions.”

5 things to know in Montana for Friday, October 3

Your daily look at news, upcoming events and the stories that will be talked about today.

Karen Ruth Adams stood before a Model United Nations class at the University of Montana on Tuesday, preparing students for careers in public p…

Fear a bigger problem than Ebola for Montana health professionals

In the struggle to stop an Ebola epidemic that’s killed thousands of West Africans and one person in the United States, Hamilton’s Rocky Mount…

If a cure for Ebola makes it to market soon, it probably won’t say “Made in Montana.” But it will have Montana fingerprints all over it. Researchers and clinical staff from Hamilton’s Rocky Mountain Laboratories have been in Ebola-affected West African countries for months, helping Doctors Without Borders clinics perform laboratory tests on Ebola medical samples.

Dr. George Risi had to pass a dozen armed checkpoints to leave Sierra Leone – four of which ordered him out of the car so a guard could take h…

As the death toll from an Ebola virus outbreak in West Africa exceeds 700 people, help may come from western Montana.

Dr. George Risi, an infectious disease specialist, shows one of St. Patrick Hospital’s three rooms that are equiped to handle infectious diseases like Ebola on Monday. St. Patrick has had the isolation wing of its intensive care unit since 2007, and is one of four facilities in the United States set up to care for patients with Ebola.

Kate Hurley, St. Patrick’s intensive care nursing director, describes how the isolation unit’s nursing station is self-contained with supplies and drugs that might be needed. Hurley and Dr. George Risi recently helped a clinic in Sierra Leone that cares for Ebola patients.