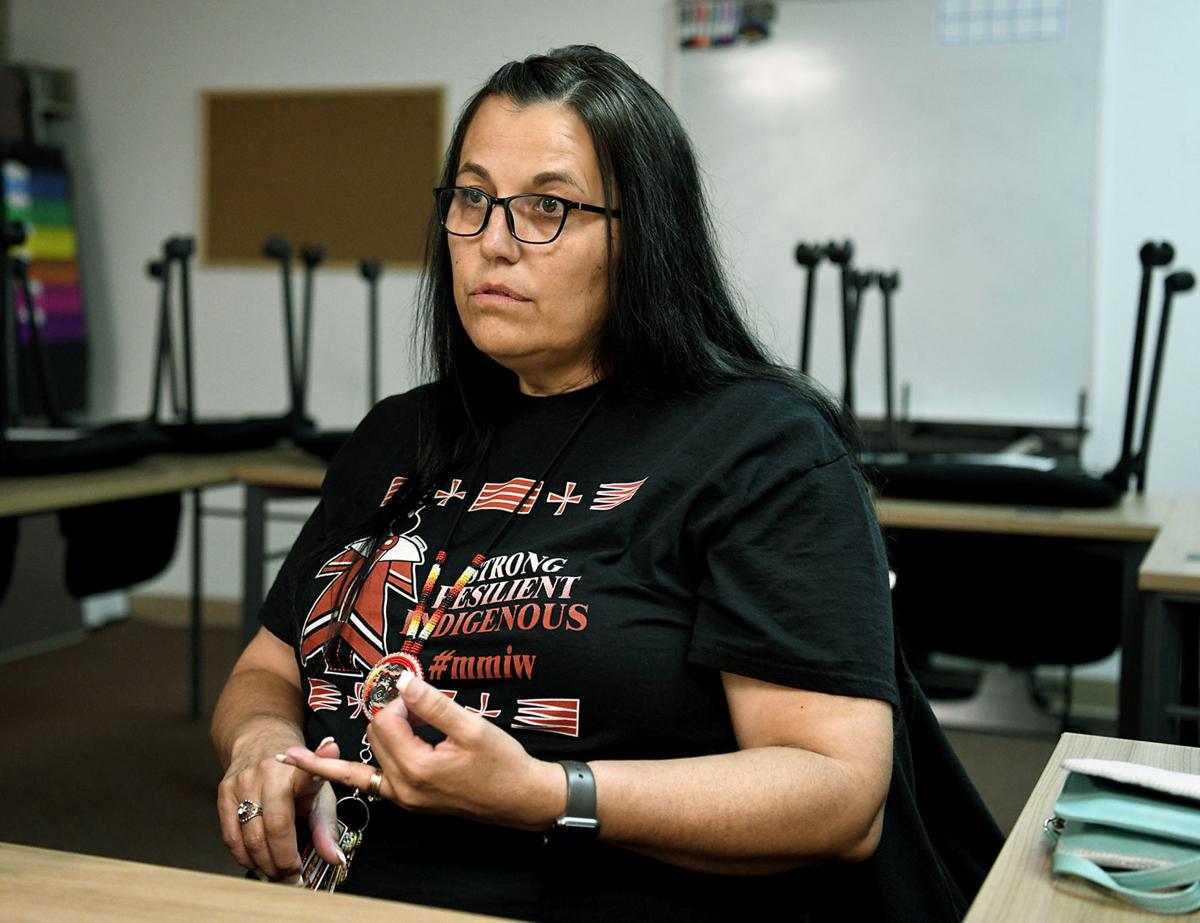 Toni Tatsey, principal at KW Bergan Elementary in Browning, said the school added classrooms for 4-year-olds to bridge the gap between Head Start and kindergarten, but funding is uncertain. Although data shows that preschool is an important indicator for later academic success, Montana lawmakers didn't approve funding to continue a pilot preschool program. 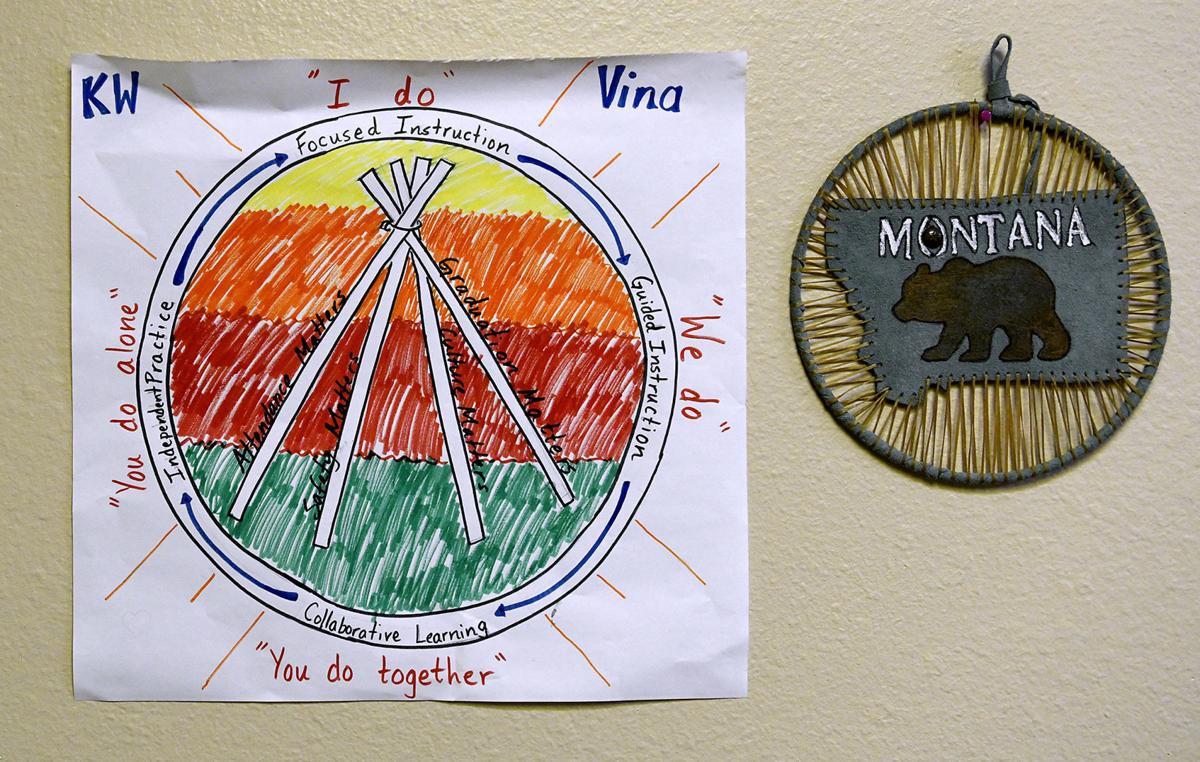 A drawing in Tatsey's office at KW Bergan Elementary in Browning that illustrates the school's educational philosophy is based on the four lodgepole pines that the Blackfeet use when creating a traditional lodge. The four lodgepoles represent graduation, attendance, culture and safety at the school. 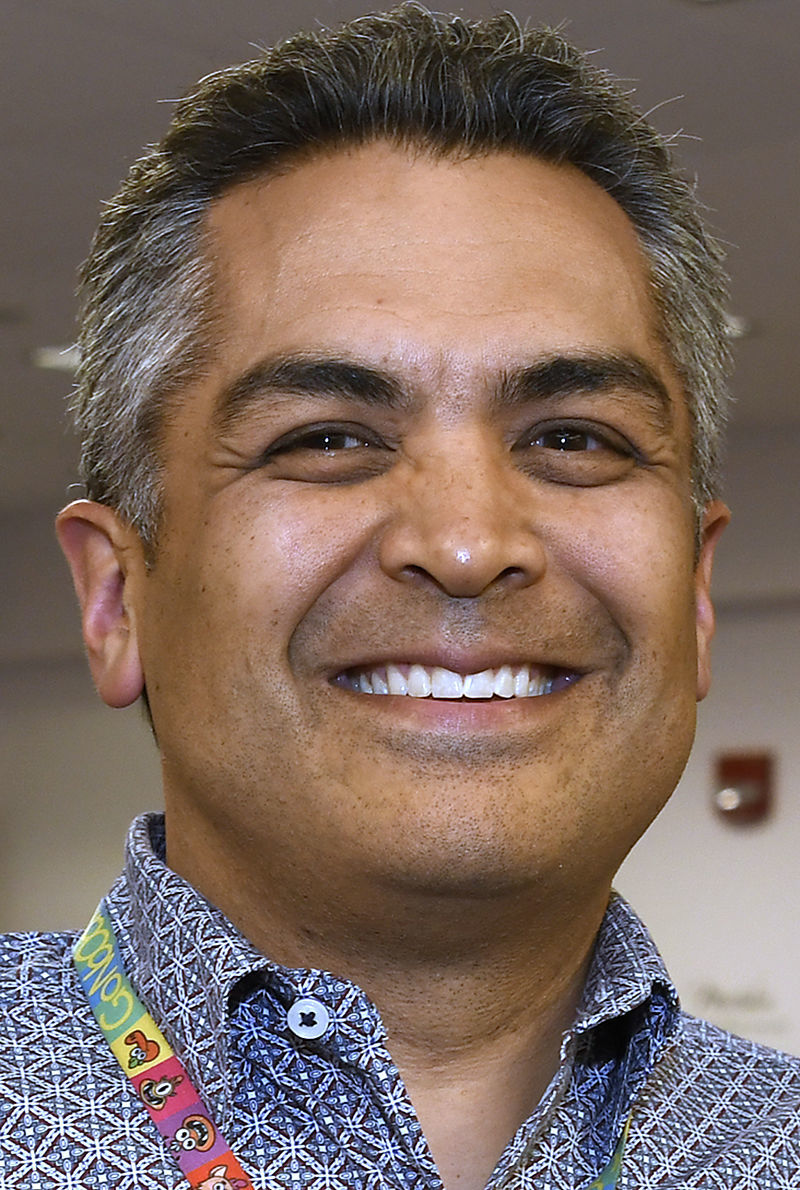 Toni Tatsey, principal at KW Bergan Elementary in Browning, said the school added classrooms for 4-year-olds to bridge the gap between Head Start and kindergarten, but funding is uncertain. Although data shows that preschool is an important indicator for later academic success, Montana lawmakers didn't approve funding to continue a pilot preschool program.

A drawing in Tatsey's office at KW Bergan Elementary in Browning that illustrates the school's educational philosophy is based on the four lodgepole pines that the Blackfeet use when creating a traditional lodge. The four lodgepoles represent graduation, attendance, culture and safety at the school.

Students entering the Montana University System are already behind, with only 33% achieving the required minimum ACT score of 22, according to state data from the 2017–2018 school year.

But the achievement gap for students starts at an early age in Montana — one of fewer than 10 states without a permanent publicly funded preschool program — despite data that show preschool is an important indicator for later academic success, as well as social and emotional development.

In 2017, Montana looked one step closer to having public preschool. But despite a concerted push from Gov. Steve Bullock, results from a pilot program that showed gaps closing, and testimony from educators, lawmakers backed away from funding the program in the 2019 legislative session.

The state's top public schools official also did not support a bill that would have authorized public preschool. Montana Superintendent Elsie Arntzen maintains that K-12 schools should be fully funded before adding preschool, according to Office of Public Instruction spokesman Dylan Klapmeier.

"We have a lot of schools across the state to fund," Klapmeier said last week. "A lot of them are spending on infrastructure, so a new cohort of preschoolers could add another burden on our already burdened infrastructure."

At a legislative hearing this spring for the pre-kindergarten bill, other elementary school leaders offered impassioned support.

In elementary and middle school, an increasing number of students are failing to meet proficiency benchmarks in reading and math, according to state data. In high school, students who are already behind academically struggle to meet college readiness standards, according to state ACT scores.

When they get to college, students who succeeded in high school may still wrestle with rigorous course standards. Many say math is one of the main obstacles.

Standardized tests are only one measure of student performance, but the benchmark ages for proficiency — third grade for reading and eighth grade for math — serve as predictors of future academic success.

Students who don't read proficiently by third grade are four times more likely to drop out of high school than proficient readers, according to a study published by the Annie E. Casey Foundation, which compiled additional research in a report called "Why Reading by the End of Third Grade Matters."

“Kids go from building all these skills to learn how to read, and then they use those reading skills to actually learn,” said Rob Watson, the new superintendent of Missoula County Public Schools.

Watson previously served as the superintendent of Bozeman Public Schools, where he and a committee restructured the district’s goals and curriculum based on data from student assessments.

By looking at student's test scores for reading and math at benchmark ages, the Bozeman district works to identify the students who are falling through the cracks and come up with a plan to get them up to speed.

Watson said the district started with an initiative to have all eighth graders take algebra so they would be ready to take algebra II in high school, which serves as a predictor for college success. But the district quickly realized that not all students were ready for algebra, so it took a closer look at students' reading skills in third grade and even kindergarten.

“You start losing credits, you start falling behind, and then you drop out,” Watson said.

To gather baseline information, the district began giving a pre-reading assessment to students in their first three weeks of kindergarten. Results showed 40% of incoming kindergartners didn't have the pre-reading skills they needed.

"That was a big wake-up call for us because we really only had kindergarten, first and second grade to get them turned around and get them on the right path," Watson said.

Bozeman is far from the only district in Montana that receives kindergartners with different levels of academic, social and emotional readiness.

A mountain of research shows that pre-K is critical in closing achievement gaps. In a 2018 report by the Center for American Progress, researchers from the National Institute for Early Education Research found that providing high-quality preschool to all children nationally would dramatically reduce inequality in academic preparedness in kindergarten.

In 2017, Montana legislators authorized $6 million in grants to fund a two-year pilot program for publicly funded preschool known as STARS, which enrolled 306 children in classrooms across the state.

A state report found that the pilot program increased school readiness by about 21% and helped prepare more students for kindergarten, especially disadvantaged students. In total, 93% of students who attended STARS programs were considered ready to start kindergarten.

Toni Tatsey, the principal of KW Bergan Elementary School in Browning, said preschool is particularly critical for students on the Blackfeet reservation who have experienced childhood trauma. While teachers focus on reading and math scores, they often need to spend more time on early interventions to ensure that children have their basic needs met and gain a sense of identity.

"Once they feel safe and know we’re here for them, then that learning will take place," Tatsey said.

Last October, Bullock, a Democrat, took a bipartisan group of lawmakers to visit preschool programs in Alabama, a GOP-led state increasing its investments in pre-K. The trip swayed some legislators, but Montana lawmakers failed to approve funding to continue STARS or to create a permanent publicly funded preschool program in 2019.

As state funding for Montana's pilot program expires, so too does a federal four-year $40 million preschool development grant.

With funding for public preschool nearing expiration, Tatsey said K.W. Bergan is looking at other options to continue its program. In the meantime, families across the state will be largely left on their own to pay for private preschools and find ways to ensure their kids are ready for kindergarten — and poised for later academic success.

On the heels of another school year, the Missoulian examines this week the role education plays in upward mobility. Across the United States, economists have tracked a steep drop in economic mobility across all 50 states in the last half century.

This series looks at challenges Montana students and educators face and models that have proven to make a difference. Stories were produced with support from the Education Writers Association Reporting Fellowship program.