The Montana health department is proposing major changes to rules governing private residential programs for troubled teens to make the programs safer for children attending them.

The Montana Department of Public Health and Human Services, which gained oversight of the programs in July as a result of a new law passed by the 2019 Legislature, released a draft of the proposed rules on Friday.

Three weeks after the new law went into effect, DPHHS removed all 27 children from the Ranch for Kids in Rexford on July 23 following allegations of abuse and neglect.

The proposal includes licensing requirements for programs, protocols for reporting abuse and neglect, and procedures for denying, suspending and revoking licenses.

Once approved, the rules will replace those created by a board that has been referred to as the "fox guarding the henhouse" because the majority of its members were administrators from the very programs the board regulated.

There are currently 15 licensed programs in Montana, although additional programs may operate unlicensed if they claim religious exemption — a loophole that the legislature has repeatedly tried but failed to close with each session.

Under the new rules, DPHHS must conduct an on-site survey (which may be done unannounced) before issuing a program license. The previous rules required the former oversight board to give programs advance notice before any inspection.

The new rules also state that DPHHS may suspend, modify or revoke a program's license if it finds a program is not in compliance with the licensing requirements, including if the program fails to meet staffing requirements or if the program has made negligent or intentional misrepresentations "regarding any aspect of its operations or facility" to DPHHS.

The state could also suspend a program's license if a law enforcement or DPHHS investigation determines that staff or anyone associated with a program may pose "any risk or threat to the safety or welfare of program participants," or if an individual associated with the program has been named as the perpetrator in a substantiated report of abuse or neglect. 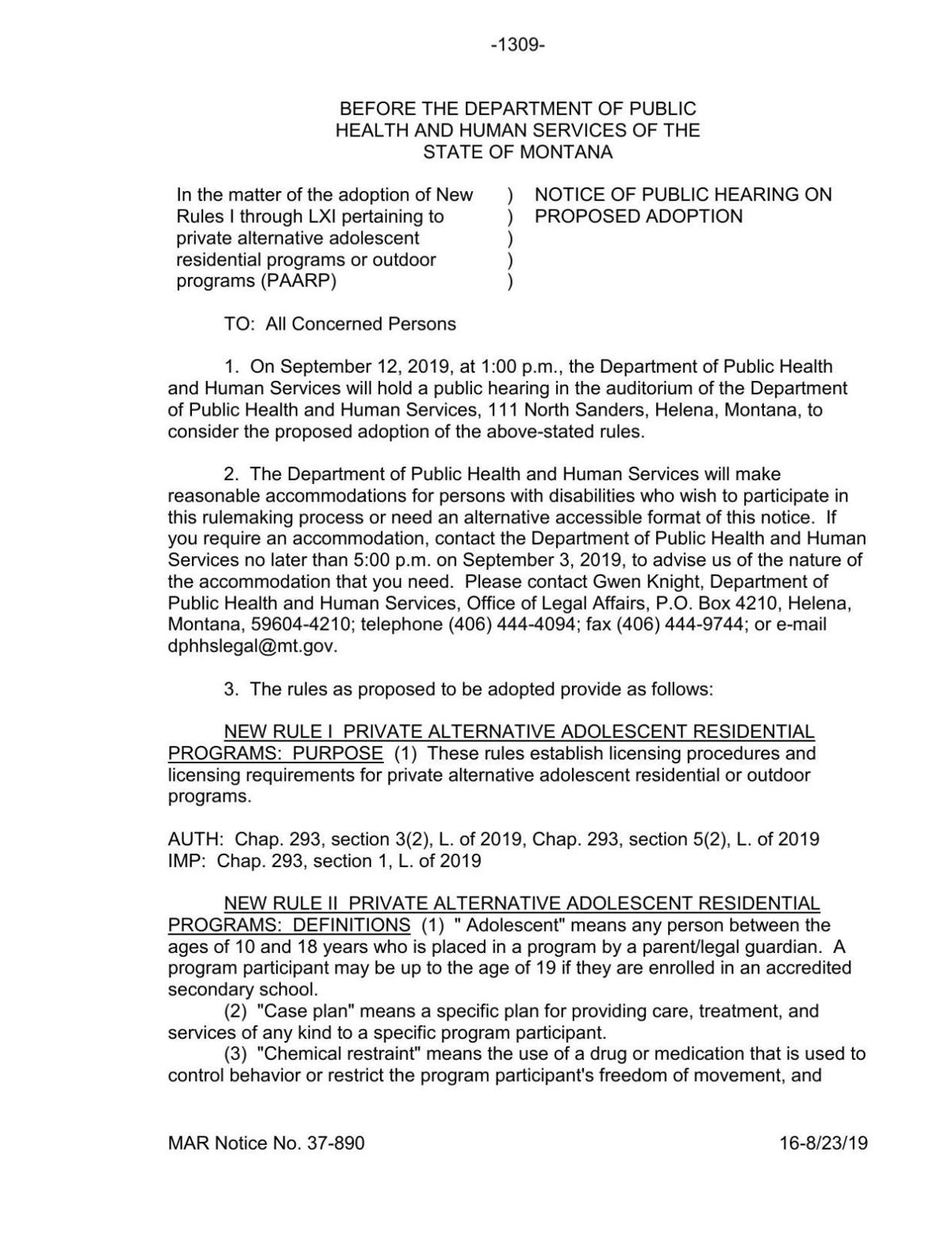 The rules also define terms such as "time-outs" and "seclusion" that were previously left open for interpretation by programs because they weren't written into statute. Seclusion, defined as "locked isolation in which the resident is physically prevented from leaving" is prohibited, while "time-outs" where the resident is not physically prevented from leaving, are not.

Overall, the rules impose stricter requirements and mandate higher standards of care to ensure the safety of program participants who are often dealing with social, emotional and behavioral issues. Those may include drug and alcohol dependency, eating disorders, or psychological disorders such as depression, bipolar disorder and post-traumatic stress disorder.

One proposed rule would require programs to develop admission policies that clearly define the types of adolescents they serve because participants have "a wide variety of needs and behaviors and one program may not be able to appropriately serve the adolescent," according to the proposed rules, which also state that the inappropriate placement of a child in an ill-suited program could be "harmful" to the adolescent or others in the program.

Once approved, the rules will help align private alternative adolescent residential or outdoor programs more closely with other similar facilities regulated by DPHHS.

Comments will be taken at a public hearing at 1 p.m. on Thursday, Sept. 12 in the DPHHS auditorium in Helena.

Jon Ebelt, DPHHS spokesperson, said the agency will be available to answer questions from the media closer to public hearing.

Anyone wishing to comment may submit statements orally or in writing at the hearing, or send them to DPHHS no later than 5 p.m. on Friday, Sept. 20. Comments can be mailed to Gwen Knight, Department of Public Health and Human Services, Office of Legal Affairs, P.O. Box 4210, Helena, Montana, 59604-4210; faxed to 406-444-9744; or emailed to dphhslegal@mt.gov.