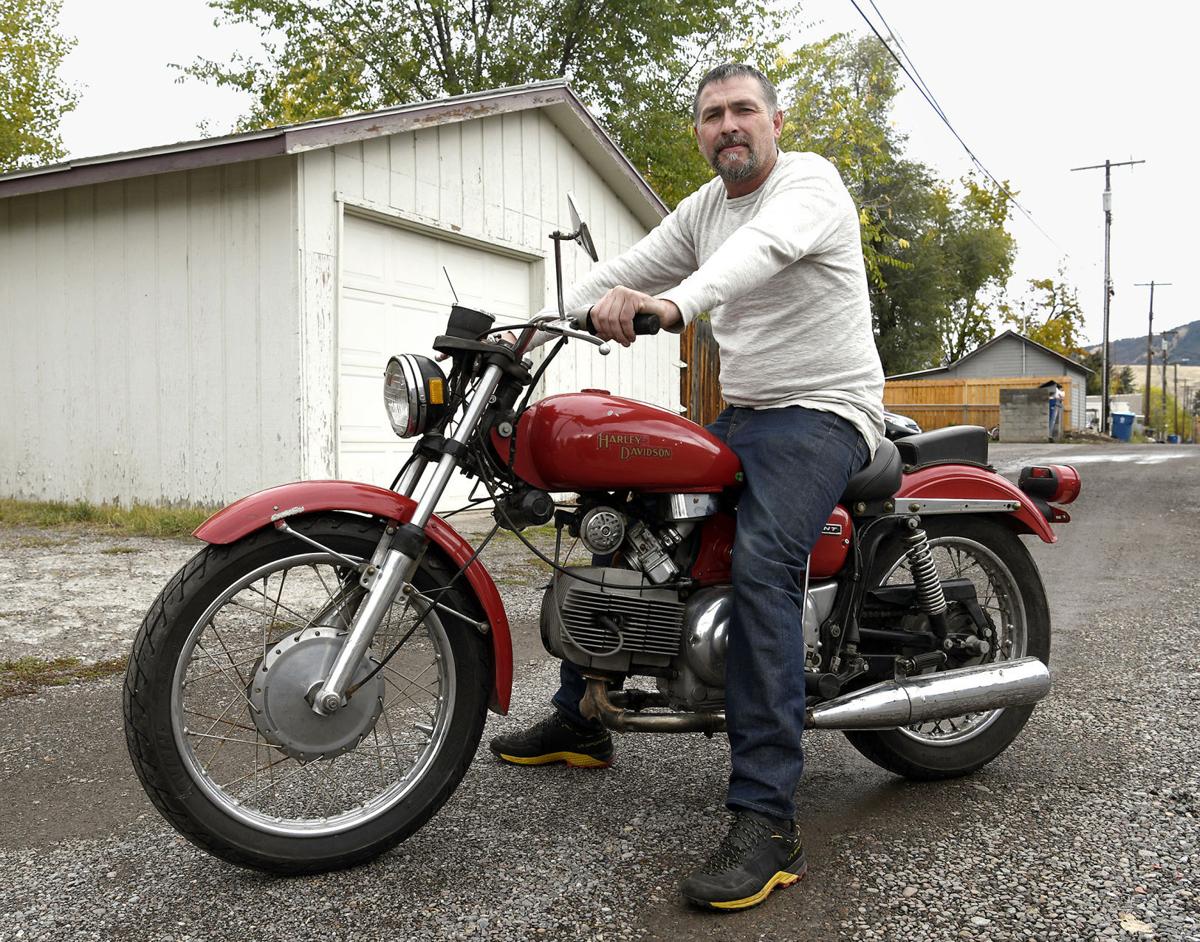 Miles McCarvel sits on his 1972 Aermacchi Harley-Davidson 350 Sprint, which was stolen from his garage four years ago and returned to him last week. McCarvel said he doesn't know who took the motorcycle, where it was the last four years, or who returned it and why, but the bike was in exactly the same condition as when it was stolen. 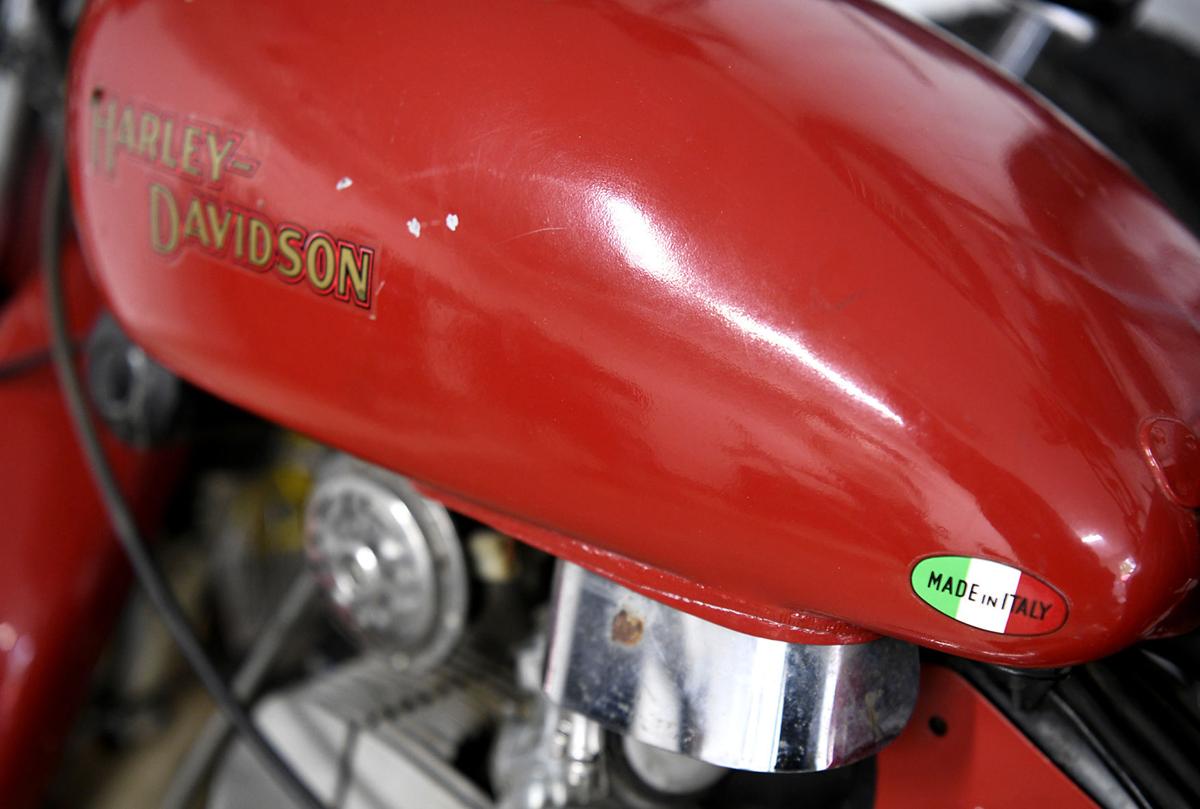 The Aermacchi Harley-Davidson 350 Sprint that was stolen and then returned to Miles McCarvel has a unique history. Harley-Davidson bought a 50% share in Italian motorcycle manufacturer Aermacchi in the 1960s in order to compete with small Japanese bikes entering the U.S. market.

Miles McCarvel didn't think he was ever going to get his 1972 Harley-Davidson motorcycle back after it was stolen four years ago.

Last week, though, he came home to find the bike leaning up against his garage.

The bike looked exactly the same as the last time McCarvel saw it: it was still missing a battery, the tires were flat and it didn't have any new miles on it.

McCarvel hopped out of his car, took a picture of the red Aermacchi Harley-Davidson 350 Sprint and made a post on Facebook that read: "I built this bike when I was 20 years old! Glad to have it back. I guess there’s good things happening in the world too."

The post received over 350 reactions and over a hundred comments, including one comment from a person who said their cousin also had a stolen truck returned a couple weeks later with a $20 bill on the console.

Missoula Police Department public information officer Travis Welsh said it isn't very often that people return items they've stolen without police intervention, and said that once a theft has already occurred, any weight given to the gesture of returning the item at a later time would be determined by a prosecutor.

McCarvel, a union representative for the Association of Bridge, Structural, Ornamental and Reinforcing Iron Workers, said the bike went missing four years ago when his garage was broken into while he was away from home teaching welding classes on the Yakima Indian Reservation.

While he was gone, a neighbor found one of McCarvel's guns in the alley behind his home and McCarvel thought he must have left the garage door unlocked and someone found their way in. He came home briefly before making another trip to the reservation, and when he returned home for the second time, his garage door was wide open and more things were missing, including his motorcycle.

McCarvel filed police reports and didn't hear anything until a couple of years ago, when police found one of his guns in California during a gang sweep. They did a check and found that somebody else had pawned another one of McCarvel's guns in Missoula, which he got back, but the motorcycle was still missing.

The thefts did have one upside, which was that they changed McCarvel's outlook on life in a way.

"It affects you to lose stuff like that that you have a hard time getting rid of," McCarvel said. "It's like 'Well, maybe I just didn't need that stuff and I wasn't using it. Like I had these guns that I'd never shot and a motorcycle that I didn't ride. It was something that I just kept because it had sentimental value."

McCarvel said he doesn't know who broke in or stole the bike, and thousands of dollars of other items he's still missing, but he said he thinks it was likely someone living close by or someone who felt guilty.

"I think that they just took it, put it somewhere and had to look at it every day," he said of the bike.

Coincidentally, it wasn't the first time McCarvel had stolen items returned to him. At age 20 and living in Southern California, he was mugged on his way to a payphone. He didn't have much on him, so the person who mugged him took his shoes.

"They drove up two blocks and stopped and turned around and came back and I'm like 'Oh great, they're going to kill me' and the guy runs up to me and he's holding his gun and he hands me my shoes back. Maybe it's just weird stuff like that happens to me."

The revisions allow existing ADUs to expand along existing building lines, raise the maximum height of an ADU to 25 feet, remove the requirement for owner occupancy, and remove required parking.

"We followed the federal law and our hands were tied," said a spokesperson for the Office of Public Instruction.

Missoula health officials said they expect the number of Covid-19 cases, hospitalizations and deaths in the county to continue to increase. Additional restrictions are possible.

Politics Pop: City attorney Jim Nugent said "there is some legal vulnerability for the City of Missoula if it attempts to ban flavored tobacco products."

Miles McCarvel sits on his 1972 Aermacchi Harley-Davidson 350 Sprint, which was stolen from his garage four years ago and returned to him last week. McCarvel said he doesn't know who took the motorcycle, where it was the last four years, or who returned it and why, but the bike was in exactly the same condition as when it was stolen.

The Aermacchi Harley-Davidson 350 Sprint that was stolen and then returned to Miles McCarvel has a unique history. Harley-Davidson bought a 50% share in Italian motorcycle manufacturer Aermacchi in the 1960s in order to compete with small Japanese bikes entering the U.S. market.