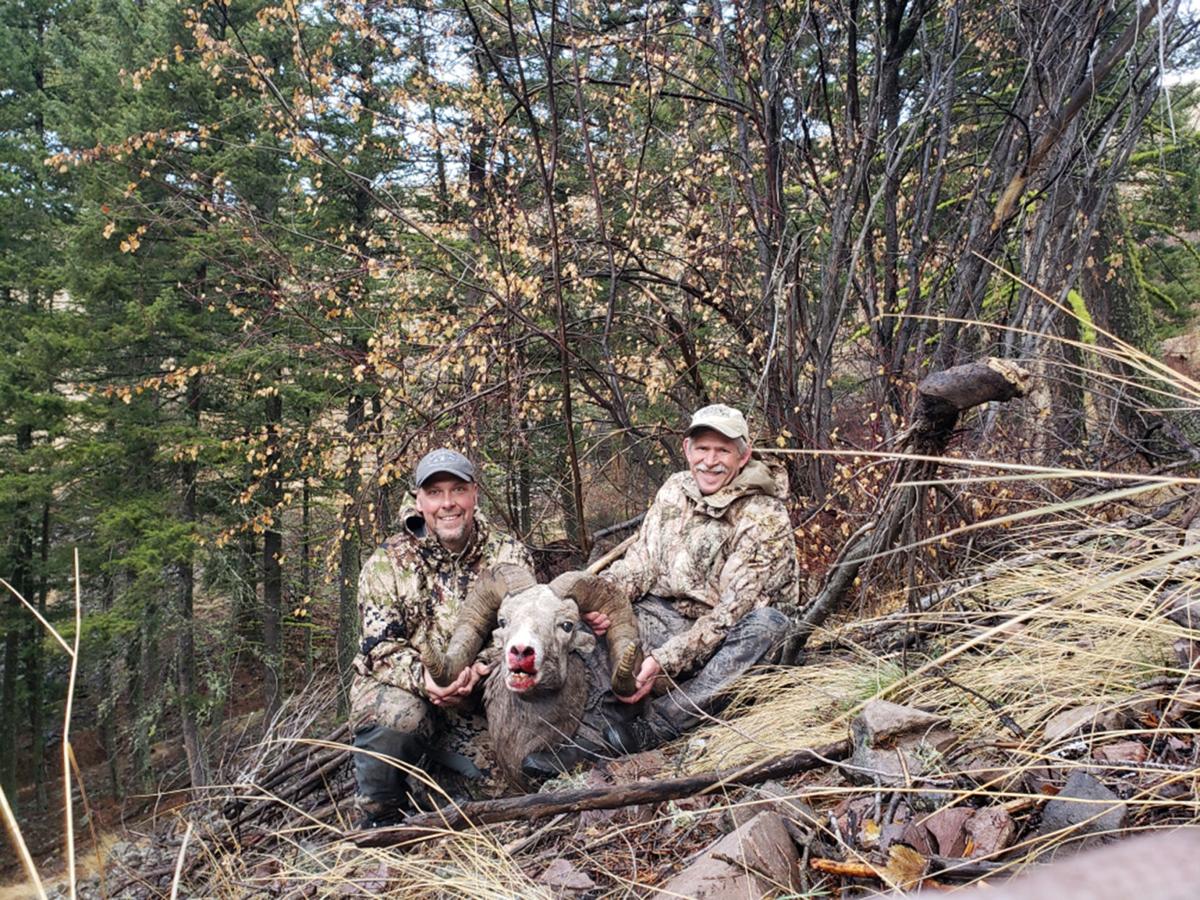 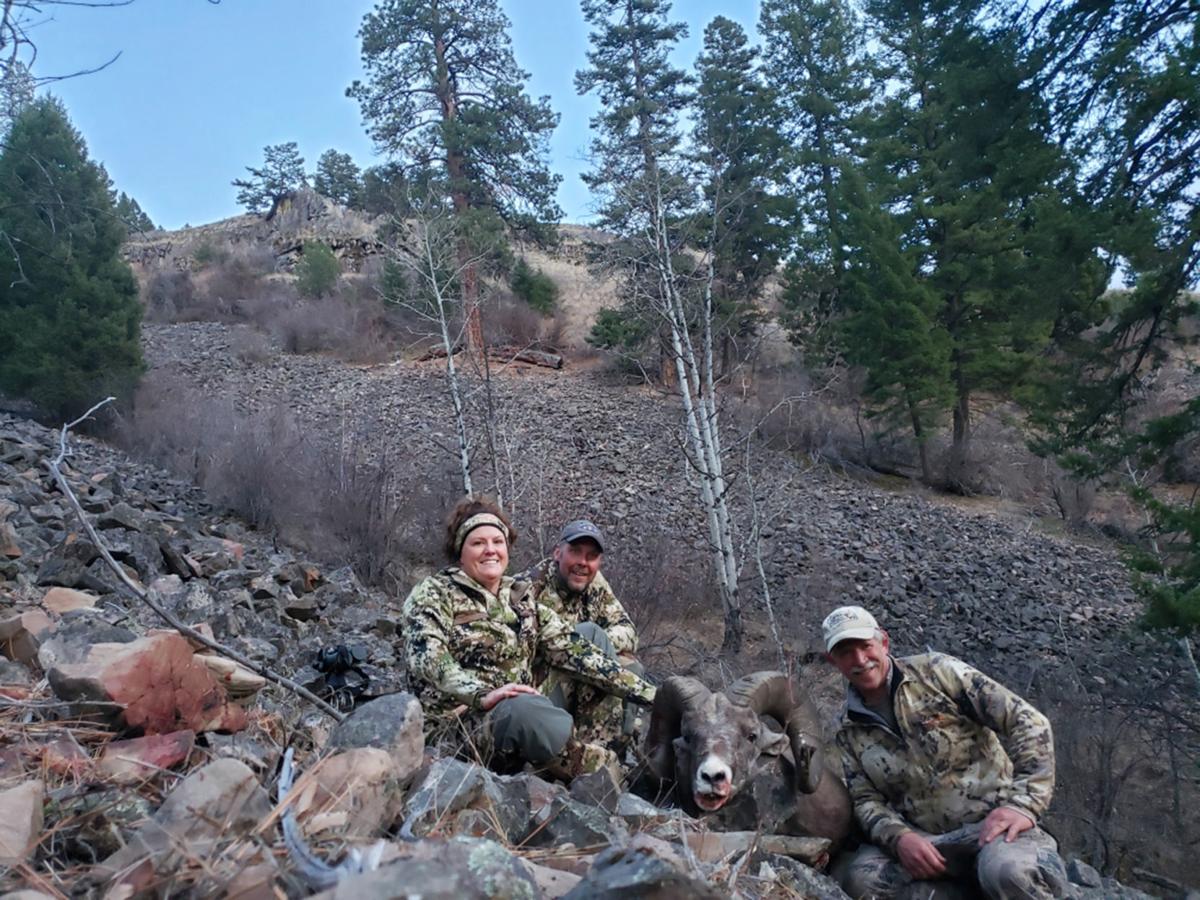 Bobbie and Mick Waletzko worked with Rich Lamb (right) to harvest two bighorn rams in the Rock Creek drainage this fall. The two families didn’t know one another, but after Bobbie Waletzko and Lamb obtained the only two licenses available in the hunting district, they shared resources to make the most out of their opportunity.

Bobbie and Mick Waletzko worked with Rich Lamb (right) to harvest two bighorn rams in the Rock Creek drainage this fall. The two families didn’t know one another, but after Bobbie Waletzko and Lamb obtained the only two licenses available in the hunting district, they shared resources to make the most out of their opportunity.

While most hunters only laugh when asked for the secret location where they bagged their big game, the lucky two who obtained the only bighorn ram licenses in lower Rock Creek employed a different tactic.

The two strangers worked together.

“Normally I hunt by myself, but we weren’t competing, wondering whether the other person was going to shoot the ram before I did,” said Rich Lamb of Lolo. “Now, I had someone to go with and analyze the shape of the rams — it’s hard to just get the size sometimes, especially when you don’t hunt them enough.”

And that hunt was every bit as important as the harvest was in Hunting District 210, where the chance of getting one of the two coveted bighorn sheep licenses is less than 1%. In 2018, 303 people applied for that district alone.

“Why be competitive? Why not help each other? It’s a different opportunity then,” said Bobbie Waletzko of Bonner, who applied for the bighorn sheep permit for 24 years before receiving one this year. “This is a once-in-a-lifetime opportunity. He was a little guarded at first, but then we started working together.”

Their unusual hunting camaraderie was initiated by Waletzko, who called Montana Fish, Wildlife and Parks to learn the identity of the other lucky hunter. When she found out it was Lamb, she realized she already had his telephone number — she and her husband had purchased a vehicle from Lamb a few years earlier.

The bighorn sheep license was for either sex, but both Waletzko and Lamb wanted a ram. They scoped the mountainsides for hours from along the road, comparing notes among themselves and others helping them spy on the sheep. They hiked the mountainsides regularly, watching for the bighorns' migration patterns and bedding areas.

The general season began on Sept. 15, but it wasn’t until Nov. 3 that Waletzko bagged her ram.

“We had seen this ram three times, and several times we decided to go get it, but then we’d hear there were two other rams. It was a long process with up and down emotions: Are we doing the right thing? Is that the one we want?” Waletzko recalled. “It got down to this was the prettiest one I had seen; he was super, super dark, which is one thing I really liked about it.”

She put the sneak on him, hiking up cliffs to get around a chunk of private property. She made her shot fairly late in the day, and her husband Mick Waletzko, Lamb, and another friend helped pack it out.

“She got hers before I got mine,” Lamb said. “But even after she got hers, she and her husband would come up and hunt with me. Mick helped me get mine out, too.”

Lamb’s chance at the jackpot came on Nov. 19, when he harvested what Mike Thompson, a Montana Fish, Wildlife and Parks wildlife manager, said that at 13½-years-old, is one of the oldest rams taken since 2007.

“FWP’s 2,181 records dating back to 2007 show that this ram is tied with eight other rams as the second-oldest recorded in Montana during that time period,” Thompson wrote in the FWP Region 2 newsletter. “The oldest ram is listed at 15 years old, and was taken this year in Hunting District 340” in the Madison River drainage.

Thompson said it was an important ram near the end of its natural lifespan. The ram survived a pneumonia die-off the winter of 2009-2010, apparently carrying a resistance to the pathogen. Thompson said it’s quite possible the ram passed that disease resistance to dozens of lambs born in recent years, contributing to the long-term recovery and resilience of the Lower Rock Creek herd.

“When I saw him I hadn’t seen a ram that big, and I’ve seen some nice ones. But not that big down on the bottoms at that time of year,” Thompson told the Missoulian. “He’s one of the tough ones and it’s good that he lived as long as he did. Maybe he passed on some resistance to pneumonia.”

Thompson added that the wear and loss to the ram’s incisors made it more difficult for him to feed.

When asked who got the better ram, both Waletzko and Lamb complimented the other hunter.

“His is older, but it depends on what you’re looking for,” Waletzko said. “It’s such a personal thing, so you can’t say one is better than the other. There’s a difference in what each person wants.”

Even better than bagging their ram was the friendship that ensued between the two families. That bond was further strengthened this week when the Waletzkos invited the Lambs over for Christmas cocktails.

“His wife knew half of our family, which we didn’t know, so that added another aspect to this,” Waltezko said.

And to both hunters, that bond will be what they carry out from their hunting experiences together.

“It takes a village,” Lamb said. “We hunted together the whole season, and had a really great season. That was the neatest part of the hunt — I made a lot of new friends.”