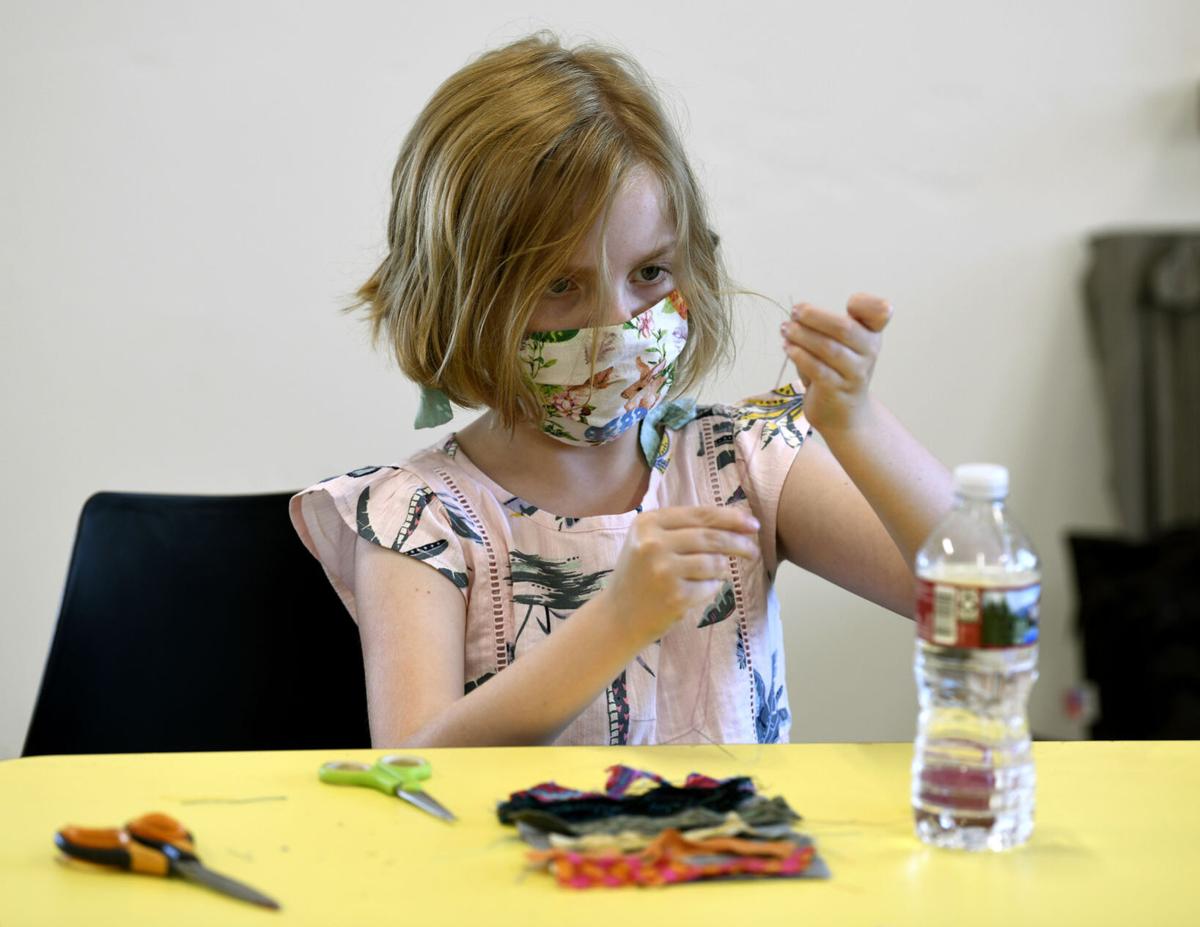 Piper Hughes works on a project during a sewing camp at Zootown Arts Community Center on Monday. Enrollment in kids' summer camps in Missoula has gone up and down this summer as COVID-19 case numbers fluctuate. 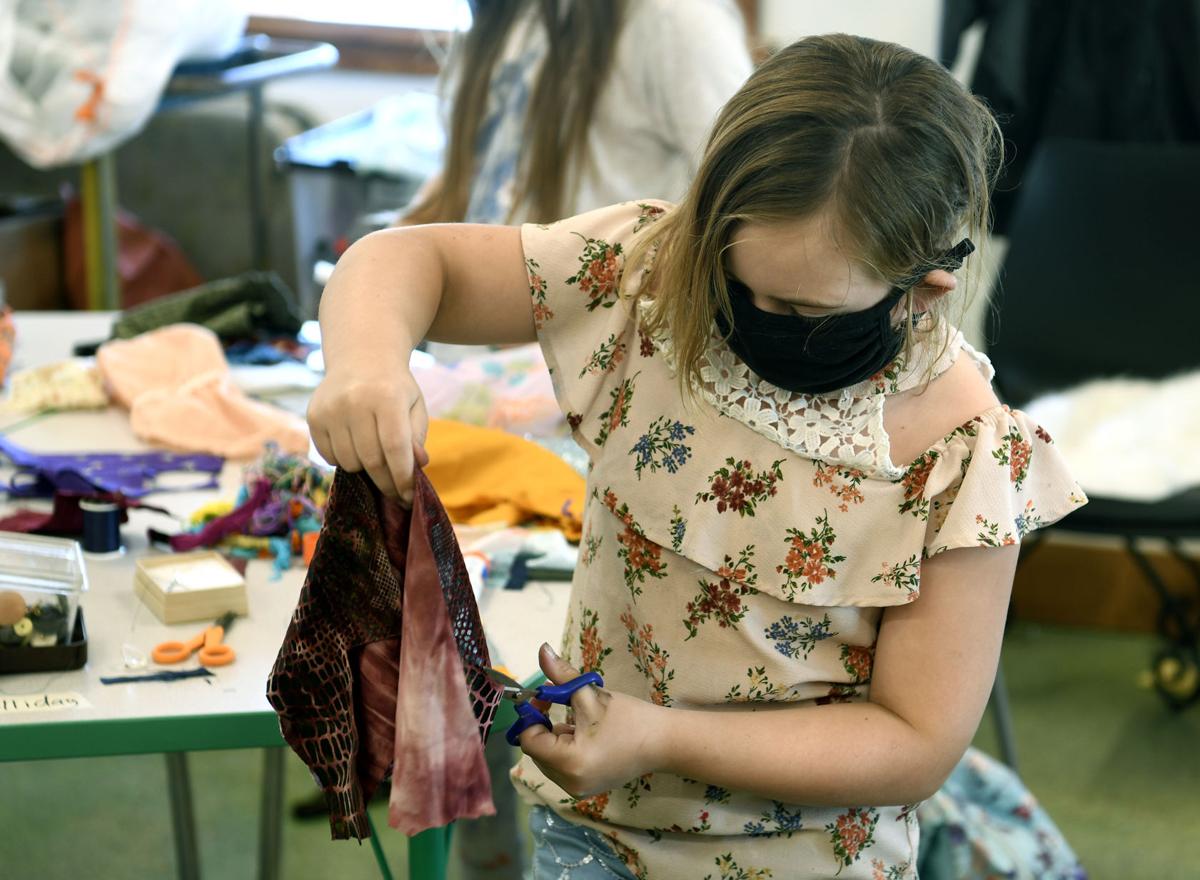 Third-grader Ada Bangingson cuts fabric for a project at the ZACC's sewing camp on Monday. The camp teaches kids new skills while providing a fun outlet for them.

Donning a black mask that her mom made for her, Ada Bangingson tried her own hand at sewing on Monday at a Zootown Arts Community Center summer camp.

Bangingson was one of about 10 kids working on a hand stitching project during a sewing camp at the ZACC, which hosts a number of week-long camps to keep kids busy while school is out.

"It's a good opportunity to express yourself and work on being in the moment," said Bangingson, a soon-to-be third grader.

Bangingson said she had a little background sewing but she is hoping to make something this week that she never knew she could do.

Lizzi Juda, a fiber artist who is teaching the sewing camp, said she hopes kids have fun and pick up some new skills during the week.

Joe Kirk, education and volunteer coordinator for the ZACC, and other camp organizers in Missoula said enrollment has gone up and down this summer as COVID-19 case numbers fluctuate.

Kirk said the ZACC reduced its enrollment capacity to allow for more social distancing, noting it keeps different camps on different levels of the building in downtown Missoula.

Katie Moore, Boys & Girls Club of Missoula CEO, said its summer camps have had "the most new enrollments and also the most exiting the program."

"We've had a handful of families pull out as COVID numbers become higher, and then we've had more families enrolling as they have been eager to get their children back with their peers and participating in different programs," Moore said. "So we've been seeing both sides of it."

Summer camps serve as an escape from summer boredom for kids and as a way for parents to get kids out of the house for a little while, both of which are especially needed this summer.

"A lot of the kids are super excited to start making friends again. A lot of them have been pretty cooped up," said Tyler Taylor, associate director of the Missoula YMCA's school age programs.

"The parents as well have said that they've seen dramatic changes in their kids feeling less stressed and being able to have a place to get all that energy out, and to kind of get back into the school routine."

Moore said the biggest change over the summer is that staff and kids ages 5 and older are now required to wear face coverings.

Taylor said their camps have been busier so far in August than they were in June or July, which is usually the other way around as families fit in vacations before school is back in session.

Taylor said the Y is partnering with Missoula County Public Schools to help with a school ramp-up program in the next two weeks where kids spend a half day in their schools. He said the Y has also finalized scheduling for after school programs at Hellgate Elementary.

Moore said the Boys & Girls Club of Missoula is also working with school districts in the area to figure out plans for back to school programming. She said the organization is looking to provide an increased number of club hours to fill the gap of fewer school hours. Depending on what each school district decides to do, that might mean holding a full-day program or longer hours at after school clubs.

Moore said pre-registration is open for those programs and encouraged interested families to sign up so the organization can make plans to fit the level of need in the community.

The Missoula City Council will hear the Police Department's requests for a budget increase for the 2021 fiscal year on Wednesday amid continued calls for defunding.

"At the end of the day, we're just all humans and the more we can do in these community kind of events to learn about each other, the more we can realize we have a lot in common."

The fire is on Fish, Wildlife, and Parks land and is estimated at 2 acres. The fire is under investigation.

The Montana Supreme Court on Tuesday ruled Mountain Water will not get to seek a property tax refund for the years it paid while condemnation proceedings were underway.

Proceeds from the project will go toward helping the Poverello Center provide as many people in Missoula with shelter as possible.

Missoula County Public Schools will pursue a hybrid learning model with a mix of in-person and remote learning when school starts on Aug. 26.

Piper Hughes works on a project during a sewing camp at Zootown Arts Community Center on Monday. Enrollment in kids' summer camps in Missoula has gone up and down this summer as COVID-19 case numbers fluctuate.

Third-grader Ada Bangingson cuts fabric for a project at the ZACC's sewing camp on Monday. The camp teaches kids new skills while providing a fun outlet for them.