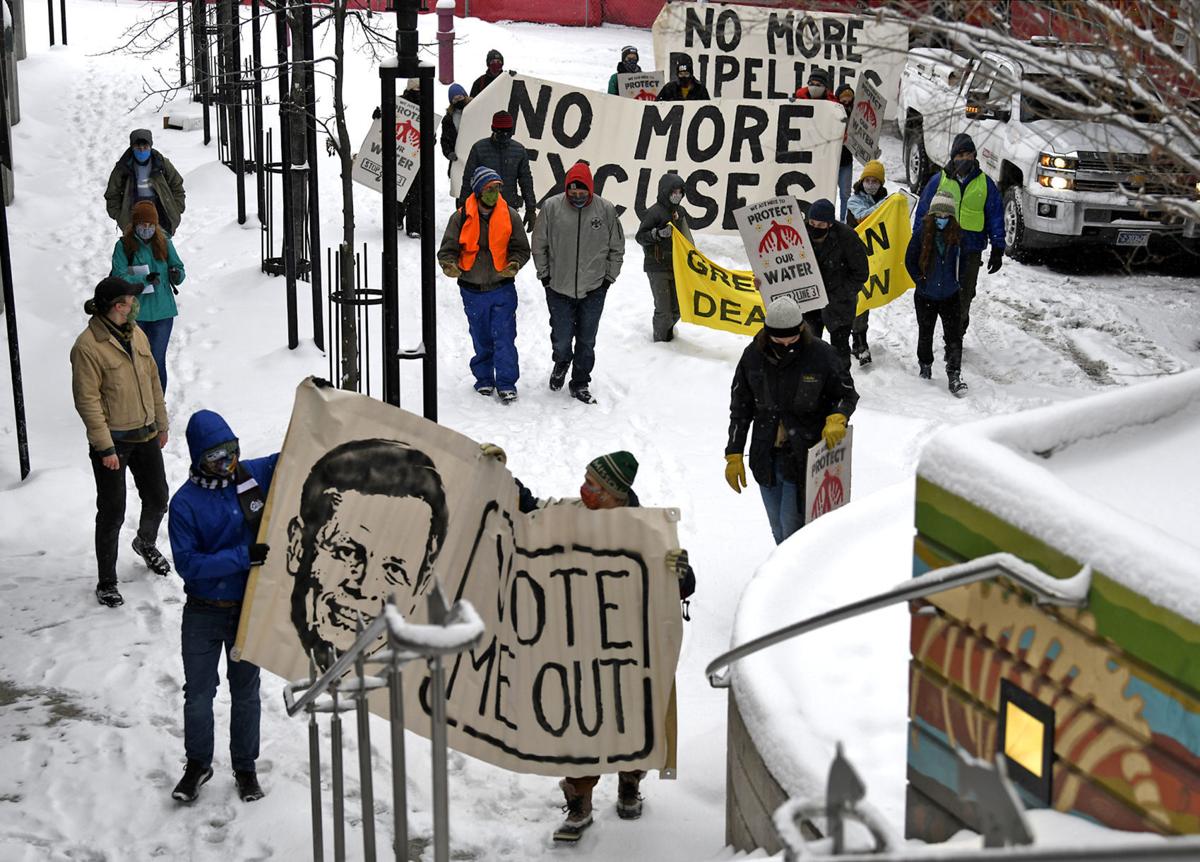 A group of people attending a rally organized by Sunrise Movement Missoula carry signs through downtown Missoula on Monday. The rally supported climate change initiatives like the New Green Deal and criticized Montana's two senators for their support of the Keystone XL pipeline. 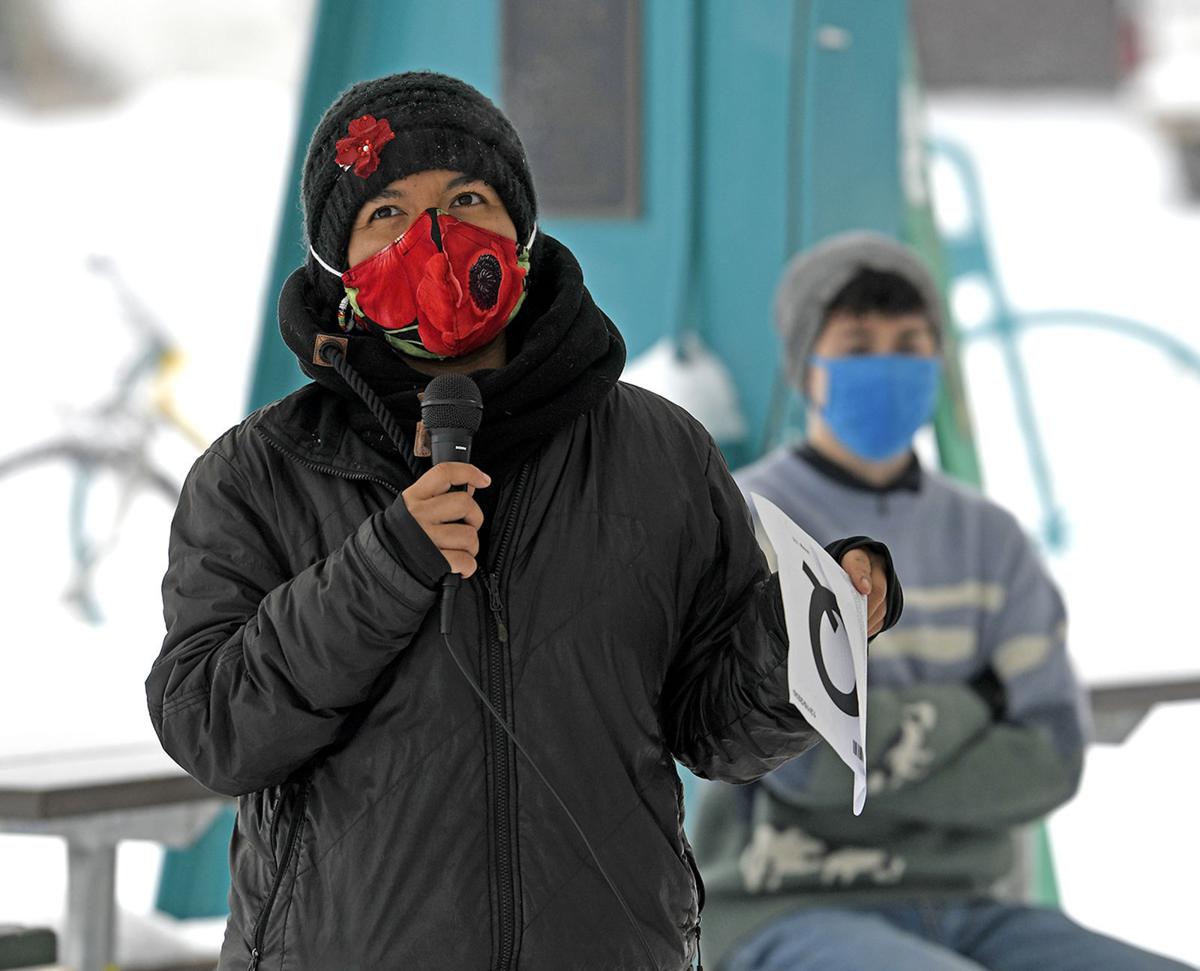 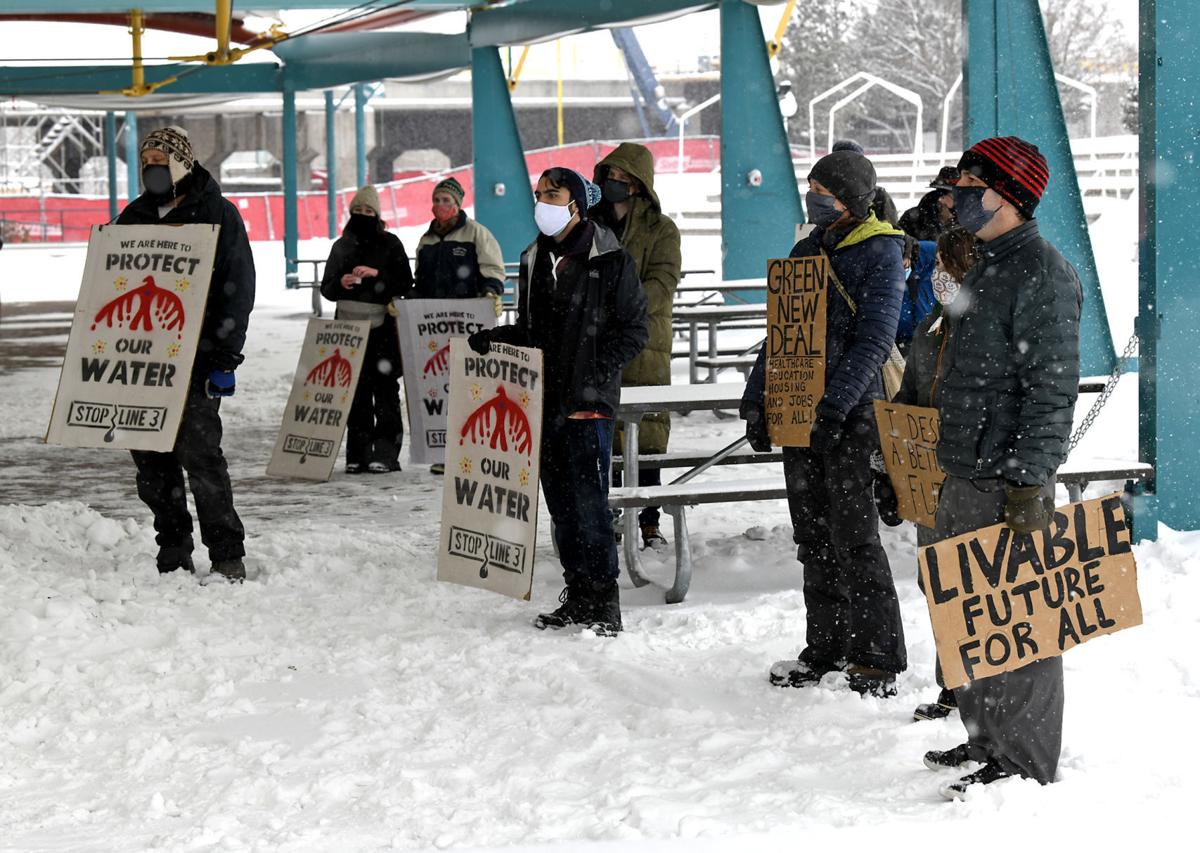 People listen to speakers at the Sunrise Movement Missoula rally at Caras Park on Monday.

On the holiday celebrating U.S. presidents, Mark Anderlik started a climate-change rally with a lengthy reading from the Declaration of Independence.

“If we don’t have government that has consent of the governed, we have government by oligarchy,” the longtime Missoula union organizer told a gathering of about 25 activists under the Caras Park Pavilion on Monday afternoon. “Such leaders who refuse to grant us our inalienable rights must change or step aside.”

Those rights to life, liberty and the pursuit of happiness face threats from pollution, environmental degradation and fossil fuel development, declared a succession of speakers organized by Sunrise Movement Missoula. They aimed special ire at both Democratic Sen. Jon Tester and Republican Sen. Steve Daines for their support of the Keystone XL pipeline construction project, which President Joe Biden canceled on his first day in office. The group marched with signs and flags to both senators’ downtown offices and chanted their opposition.

Speaker Leticia Romero particularly called out Tester for backing legislation for investigations into missing and murdered Indigenous women while also supporting the pipeline project, which she said depended on “man camps that bring indignities and crime to Indian nations.”

“We are showered every day with gifts of the earth, gifts we have neither earned nor paid for,” Romero said, quoting naturalist author Robin Wall Kimmerer. “What are we willing to do for the earth? I’m thinking of the chickadees shaking this fluffy snow off their feathers. Is there something that makes you brave enough to go forward and protect Mother Earth?”

The Sunrise Movement is a nationwide organization of youth groups loosely focused on climate change initiatives such as the Green New Deal as well as more local activities like oil pipeline construction, renewable energy development and economic justice. In addition to climate and environmental causes, the Missoula chapter members raised calls for public assistance for those afflicted by COVID-19 job losses and evictions, opposition to white supremacy and police brutality, and local financial support for the Missoula Affordable Housing Trust Fund.

The poll found a steady increase in concern about climate change throughout the eight-state region it has studied for the past 11 years.

Tree map: Program catalogs every grove in the U.S. forest

Look at a wooded hillside.

What mother doesn’t love a bath after a hot day with the kids?

A group of people attending a rally organized by Sunrise Movement Missoula carry signs through downtown Missoula on Monday. The rally supported climate change initiatives like the New Green Deal and criticized Montana's two senators for their support of the Keystone XL pipeline.

People listen to speakers at the Sunrise Movement Missoula rally at Caras Park on Monday.