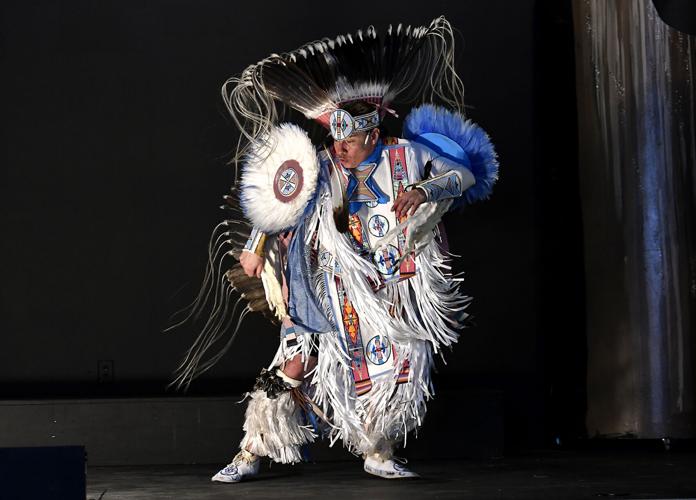 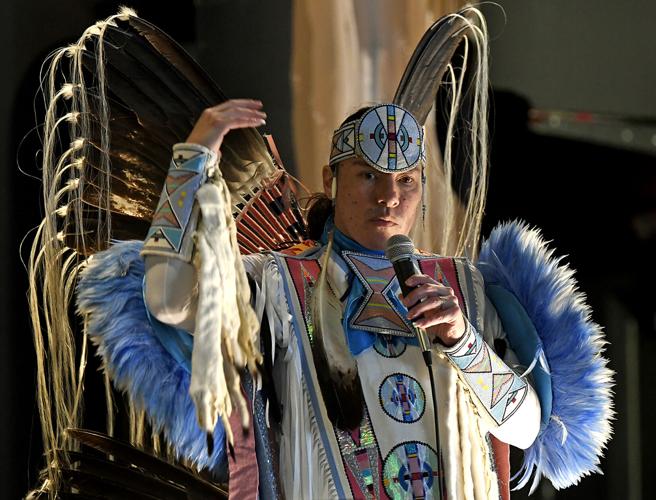 Christian Parrish Takes the Gun, who performs as Supaman, talks with students at Sussex School during his performance on Thursday.

Supaman, a world-renowned Apsáalooke hip-hop artist and fancy dancer, visited students and staff at Sussex School on Thursday for a performance focusing on lessons of inclusion and humanity.

Students filled the gym floor but spent very little time sitting. Most were on their feet, dancing and interacting with Supaman’s performance.

“When you get out of your comfort zone and you allow good things to happen, you show that respect, you show that honor, you show that kindness and that love to your fellow friends and your family,” said Supaman, who is also known as Christian Parrish Takes the Gun.

Throughout his performance, Supaman included lessons pertaining to Native American culture and history. He explained to students that the United States was founded on the attempted genocide of Indigenous peoples already residing on the land.

“But as you can see, Native Americans are still here, moving forward in a good way,” Supaman said, and then asked if any students in attendance were Native.

“Look around, because there are some Natives here. Every breath they take is in defiance of a system that didn’t want them here,” he continued. “You’re resilient, you are strong, you’re connected to this land here.”

Sussex School invited Supaman to perform after discussing how they could better explore issues of diversity, inclusion and equity with students, said Joellen Shannon, the head of the school.

At first, she planned to have the experience be geared toward the middle school students, but Supaman suggested the whole school be involved.

Sussex is an independent school in Missoula with educational opportunities for children from kindergarten through eighth grade. The school focuses on developing critical thinking, creativity, courage and citizenship through arts, outdoors and unique curriculum.

Supaman also performed a fancy dance for the students in his ornate regalia composed of colorful glass beads, eagle feathers, furs and fringe.

Throughout his time on campus, he encouraged those in the audience to turn to their neighbors and offer compliments and hugs.

“We live in a crazy world, you know. We got war going on, we got politics, you got pandemics and things like that,” Supaman said to the students. “It’s important that we love one another and that we enjoy life to the fullest right now, because we don’t have yesterday, we don’t have tomorrow, but this is what we have, right now, in the present moment.”

Later, he asked the students what genres of music they enjoy listening to. After hearing what they preferred, he asked who liked listening to all kinds of different music, because they are his kind of people.

Supaman performed a live beat in the gym on his loop station by beat-boxing and creating different sounds with his voice. When the beat was ready, he started rapping over it.

After performing, he shared his story as an artist. Eventually, he was connected with Taboo from the Black Eyed Peas to collaborate in a music video “Stand Up / Stand N Rock #NoDAPL” in support of the protests on the Standing Rock reservation against the Dakota Access Pipeline.

The music video won an MTV Video Music Award for Best Video with a Social Message in 2017.

Before wrapping up at Sussex, he invited seven students from the audience to join him on stage to produce a beat on his loop station. After that, he called for all the teachers on stage to showcase their dance moves in front of the students.

Myles Livingston, a sixth grader at Sussex, received a CD from Supaman during his visit to the school. Livingston was a fan of Supaman before he visited, and was very excited about the performance that day.

“It’s pretty cool because there’s not many Native Americans at my school, it was really awesome to hear him,” Livingston said.

Livingston is from the Kalispel Tribe and has been performing the grass dance at powwows since he was in kindergarten, he said.

“I’m so pleased with how it all went. It was really applicable for all kids, which is kind of fascinating that he’s able to do that — to capture the interest of such young kids as well as older students,” Shannon said.

Supaman is about to release a music video for a song called “Alright.” It was created through a partnership with the Montana Film Office and is a “Back to the Future”-themed video, he said.

He also has a new album out called “Medicine Bundle,” and is on tour. He has a clothing business called Good Medicine Clothing.

University of Montana drops mask requirement to a recommendation

Masks will still be required in classrooms and teaching labs for another week. The new mask recommendation policy will be in effect in those spaces on Thursday, March 3.

“Bring Them Home” premiers on Thursday at the Zootown Arts Community Center at 5:30 p.m. during the Big Sky Documentary Film Festival. The film will be available online for streaming through March 3.

The initiative seeks to establish training opportunities for up to 5,000 Montanans in sectors such as construction, health care, manufacturing and infrastructure.

The idea of learning how to ski and snowboard in adulthood can be intimidating for many.

The county’s incident rate — the seven-day average of new COVID cases per 100,000 people — has also been falling throughout the month and now sits at 68.

Several projects have already been completed, others have recently broken ground, while some still remain on the horizon.

MCPS Superintendent Rob Watson announced last week he will leave his position at the end of June.

Christian Parrish Takes the Gun, who performs as Supaman, talks with students at Sussex School during his performance on Thursday.