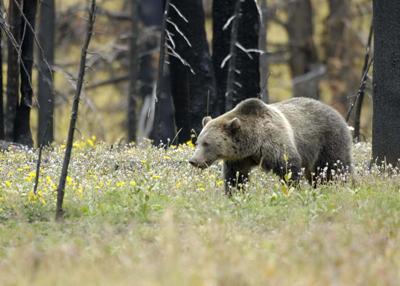 Montanans seem of two minds regarding grizzly bears in their midst.

A University of Montana survey completed this year found nine of 10 Montanans believe grizzly bears belong in the state, while just 3 percent thought grizzlies should not be anywhere in Montana.

Yet the same survey also found 83% of Montanans supported some level of grizzly bear hunting season.

“We were extremely surprised at the strong, overwhelming public support for grizzly bears,” said UM researcher Alex Metcalf, who co-authored the survey paid for by Montana Department of Fish, Wildlife & Parks. “To get 90% agreement on anything is rare. But 92% of Montanans say bears have a right to exist in Montana.”

The strong support for a hunting season was equally surprising, Metcalf said. Only 16.7% felt grizzlies should never be hunted.

However, responses fragmented when asked more specific hunt-related questions. Just over a third of Montanans agreed that hunting would make grizzlies more wary of humans, while another third disputed that claim and 29% were undecided. About 61% said people should be allowed to hunt grizzlies as long as the bear population can withstand the pressure. But only 46% supported using grizzly hunting to reduce human-bear conflict, while 36% opposed the idea and 18% had no opinion.

“This sort of makes sense in the context of other wild animal management we have in Montana,” Metcalf said. “We like to have wild animal populations and we manage them by hunting them. And the survey sees lots of agreement that hunting is a viable tool. If we’re going to do something other than that, we need to have that conversation.”

For many, the lines are clear: Grizzlies should be available to hunt like any other charismatic western big game animal. In an interview with the Billings Gazette shortly before the 2017 delisting effort failed in court, now-Gov. Greg Gianforte said he was all for allowing a trophy hunt.

"I’d be the first one putting in for a tag," Gianforte said in 2016. “I did a grizzly hunt once up in Alaska. I didn’t connect, but … I look forward to the day when we have a grizzly hunt in Montana.”

Asked at the time if he though a grizzly hunting season would eventually arrive in Montana, Gianforte bet it would.

“Again, this is part of bringing science back to the process," he said. "We need to conserve and preserve our wildlife. I think one of the best ways to do that is through scientifically set hunting quotas to keep them at sustainable levels. I think, when Montana issues a grizzly tag, there’s going to be a lot of people applying, and I will be one of them."

That presents a biological challenge.

Studies in Alaska have shown that places with lots of grizzlies can sustain a lot of hunting for mature male bears, if the females and cubs are protected. But the evidence is inconclusive that hunting is effective at targeting problem bears or reducing conflicts.

At a December gathering of the International Union for Conservation of Nature Bear Specialist Group, bear biologists and game wardens from all over North America compared notes on the effectiveness of grizzly hunting. Chris Servheen, who led the U.S. Fish and Wildlife Service grizzly program for 35 years, supervised the session.

"Hunting bears teaches bears nothing, as death is not a learning experience," Servheen said. While some Montanans claim that grizzlies were more leery of humans before the end of legal grizzly hunting in 1993, that's more likely because there were actually very few grizzlies left to get into conflicts, he said. And the practice of sport hunting has little relationship with conflict-management, as it's extremely difficult for a private hunter to find and kill the specific bear that raided a chicken coop or other depredation. Furthermore, hunting tends to be extremely restricted for safety reasons in residential areas where food-attracted bears get into trouble.

In Alaskan places where grizzlies were hunted, Miller said they showed extra wariness when humans were nearby. But historically, most successful grizzly hunting grounds were near national parks or other refuges, where bears got habituated to human presence and then fell to hunters just over the border.

“You can hunt wildlife populations in a sustainable way,” Miller said. “But it’s more problematic for small or isolated populations like grizzlies. There’s less resilience in those small systems.”

Hunting grizzlies also risks a public backlash that could have unintended consequences. A 2021 study published in Conservation Biology by Chris Darimont at the University of Victoria in British Columbia, warned that opposition to grizzly trophy hunts could hurt big-game hunting overall.

“The killing of large carnivores for trophy and not food, conducted by few hunters, has potential to threaten the social license to hunt afforded to the larger group who hunt for food,” Darimont’s study found. Social license means the general public acceptance of an activity.

Only 2 percent of U.S. hunters pursue black bears. In places with more opportunity, such as the Rocky Mountain West, wolf and bear hunters made up about 18 percent of Montana’s hunting community.

In 2018 court filings favoring delisting, Safari Club International argued hunting grizzlies should be allowed to reduce the threat big-game hunters seeking other species faced when in grizzly habitat. The second reason was that grizzlies were considered a high-value trophy for those who enjoyed hunting. If the population was large enough to endure some hunting take, it should be allowed, the SCI lawyers claimed.

“Those are just code words playing to a narrow political base, looking for a way to rationalize killing a big predator,” countered Kevin Van Tighem, a retired Canadian national parks superintendent and grizzly bear biologist. “The number of bears is irrelevant. The question is: Can we achieve something useful for society by hunting?”

"Far more people killed every year by mishandling of firearms, and I know how you (Americans) think about firearms," Van Tighem said. "Your problem isn’t the bear. It s the fear."

This July’s grizzly mauling death of a bicycle camper in Ovando happened a few months after the Montana Legislature passed a collection of measures directing the state Department of Fish, Wildlife & Parks to take a much more aggressive approach to predator control than it had in the past. Public policy in Wyoming and Idaho have also taken a harder stance toward grizzlies. Yet in Washington, D.C. the winds have shifted in the opposite direction.

The U.S. Fish and Wildlife Service lost its latest bid to delist the grizzly bears of the Greater Yellowstone Ecosystem (GYE) two years ago, and to date hasn’t announced how it plans to go forward. A five-year status report on grizzly recovery released last March found that while the NCDE and GYE grizzly populations were biologically recovered, grizzly populations in four other recovery areas remained precarious or non-existent. As when they were first listed, human-caused mortality and habitat loss remain the top threats to grizzly survival. In sum, it recommended keeping grizzlies under the Endangered Species Act.

The two biggest recovery areas, the NCDE and GYE, both anchor around popular national parks. Millions of tourists come each year, supporting thousands of local businesses and employees. Many dream of seeing a bear, and they post their success on social media with videos that professional biologists used to spend entire careers hoping to see. In August, amateur videographers caught two grizzlies fighting over a bison carcass in the Yellowstone River and a sow grizzly digging a marmot out of its burrow in Glacier Park while its cubs watched. Grizzly 399 in Grand Teton National Park has her own series of bumper stickers, among other fan memorabilia.

More livestock-related tactics such as changing ranching practices or using carcass-removal programs drew more opposition, but still had at least two-thirds of Montanans in favor.

Wildlife managers and wildlife biologists have widely differing attitudes about the effectiveness of grizzly hunting to achieve desired goals. While big-game species such as deer and elk number in the tens of thousands across Montana, the state holds about 1,000 grizzlies. Grizzlies are the slowest-reproducing mammal in North America.

“There’s overwhelming agreement that grizzly bears are a positive contribution to the economy of Montana,” Metcalf said of the survey results. “There’s also a great deal of support for encouraging conflict-reduction. We’re trying to balance the costs of bears and the value of bears.”

A Lee Enterprises series on how the Lower 48 lives with grizzly bears - one of the West's most iconic wild animals - and how they live with us.