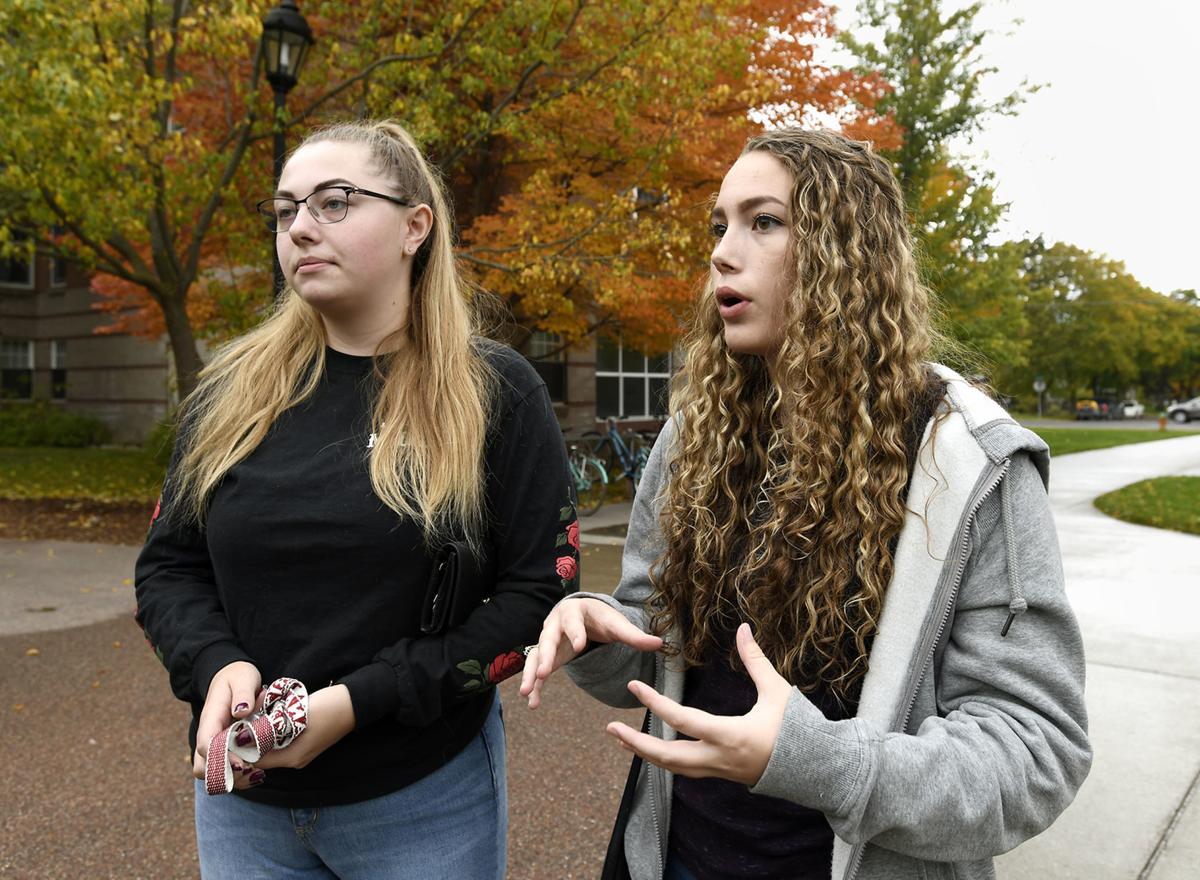 University of Montana freshmen Madison Bledsoe, left, and Alibi August talk Tuesday about how safe they feel on campus. The students said they feel supported by their peers and UM as far as their safety, and also have taken self-defense training and carry pepper spray. 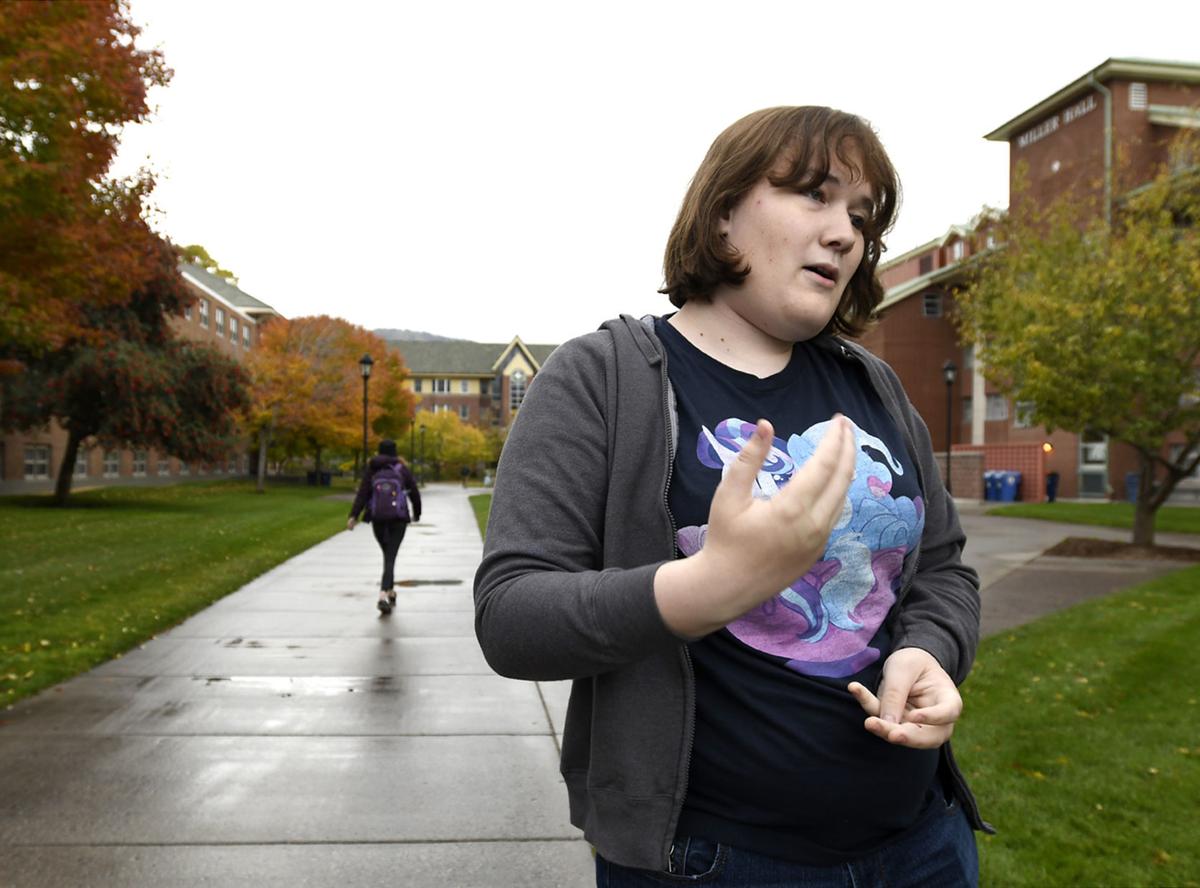 April Friedman, a UM student and dorm resident, talks about personal safety Tuesday on campus. Friedman said dorm residents generally look out for one another.

University of Montana freshmen Madison Bledsoe, left, and Alibi August talk Tuesday about how safe they feel on campus. The students said they feel supported by their peers and UM as far as their safety, and also have taken self-defense training and carry pepper spray.

April Friedman, a UM student and dorm resident, talks about personal safety Tuesday on campus. Friedman said dorm residents generally look out for one another.

The other night, April Friedman took part in a training at the student radio station all the way across the University of Montana campus from Miller Hall.

At the end of the session, Friedman, a junior, walked alone from the KBGA studio to the dorm.

"I walked back from there at 2 a.m., and I honestly felt fine," said Friedman, who also reported feeling safe in the dorm.

Alibi August feels safe on campus as well, given the training she's received from UM and her own precautions. For instance, she said the resident assistants instruct students to not open hall doors for "tailgaters," and she arms herself on her campus walks.

They aren't alone in feeling secure on campus. At UM, safety is a priority, and while UM just got hit with a nearly $1 million fine for misrepresenting crime data from four and more years ago, many students feel secure on campus.

However, at night, that number drops to 31.9 percent overall — and only 19.5 percent for women.

UM will appeal the finding and seeks a reduction in the fine, which appears to be the second-largest penalty issued for campus security after the nearly $2.4 million levied against Pennsylvania State University in 2016. This week, communications director Paula Short said the campus does not dispute the findings since it made the data corrections that led to the fine.

Campuses that receive federal funds must comply with the Jeanne Clery Act and report annual crime statistics so the public can assess campus safety. The fine is from the Department of Education's review of UM reports from 2011 to 2015.

This month, UM's 2018 report was due, and the annual assessment of crime statistics is posted online.

Claudia Denker-Eccles, who has been coordinating Clery activities at UM, said she did not see anything new or too unusual in the current data, which covers the 2017 calendar year along with 2015 and 2016.

"There's nothing that really stuck out to me as being out of bounds," Denker-Eccles said.

UM Police Chief Marty Ludemann could not be reached via voicemail Tuesday about those numbers.

Tuesday, Denker-Eccles noted increases in crimes such as stalking and rape may be positive signals that more people are feeling comfortable reporting those violations. She said higher numbers reflect greater awareness.

"It's not always bad when we get an increase in those types of crimes being reported," Denker-Eccles said.

UM communications and enrollment vice president Cathy Cole agreed the school is working to raise awareness. Earlier this week, she said UM aims to be the safest campus in Montana, and as such, it's proactively teaching students to report crimes.

"Because of that, we have a huge awareness campaign, and we want students to come forward and report," Cole said.

Campus safety has been a concern at UM since federal agencies investigated it for mishandling rape reports, and the campus entered into an agreement in 2013 with the U.S. Departments of Justice and Education to address failings — and UM leaders pledged to go the distance for students.

Across the country, mishandled rapes have been a problem on and off campus, and investigative journalist Jon Krakauer wrote a book about the nationwide problem. He based it in Missoula, and it came out in 2015.

Tuesday, UM student Elizabeth Otte said her parents were aware of the book, but they believe enough time has gone by that the campus has implemented more measures to help students stay safe. At the same time, she and her friends carry pepper spray on their walks.

"As a girl, I do find myself checking my back a lot," Otte said.

However, she also said she regularly calls GrizWalk. GrizWalk is a free program whose team members walk with students anytime between dusk and dawn or shuttle them in a golf cart so they don't have to go anywhere by themselves around campus.

"I use it almost every night," Otte said.

Last year, she didn't feel like she received timely information from administrators during one emergency. However, she said inside the dorm, she feels mostly secure, in part because of the tone the resident assistants set.

"I feel pretty safe in the dorm. Our RAs don't take a lot of crap," Otte said.

In the letter about fines for misreported crimes, the Department of Education chastised the university for misinforming those who "rely on this data to make decisions about their personal safety."

"UM provided its current students and employees with inaccurate and misleading crime statistics for calendar years 2012 through 2015 as part of its … (annual security reports)," said the letter from the department.

At night, the "very safe" feeling drops to about 63.2 percent for men. Off campus in the surrounding community, students feel less safe, although it wasn't immediately clear if information about students who felt "safe" or "unsafe" as opposed to "very safe" was available.

Madison Bledsoe, a freshman, said she feels pretty safe on campus and in the dorms. At the same time, she uses GrizWalk or tries to walk in a large group at night, and she makes sure she has a friend she can call if she runs into trouble.

She agreed the staff put students through a lot of beneficial safety training, although she wasn't convinced she always heard the straight scoop from administrators about crime on campus.

"Part of it is they don't really want to ruin their reputation," Bledsoe said.

The University of Montana is facing a $966,614 penalty for reporting "inaccurate and misleading" crime statistics — on everything from liquor …