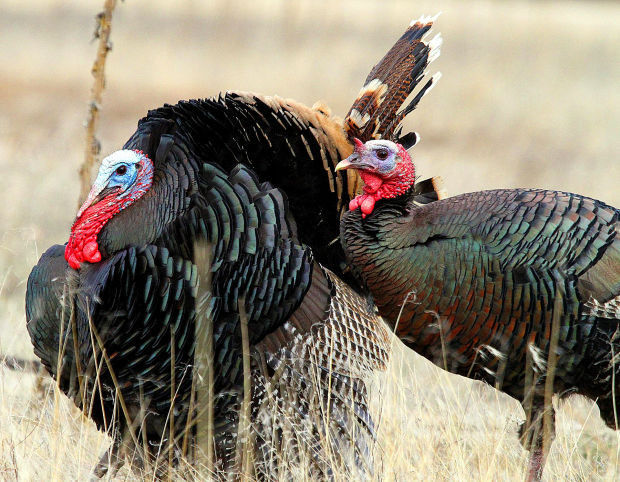 Montana is home mainly to the Merriam species of turkey, shown here, although the Flathead region contains some Eastern turkeys. All turkeys in Montana are transplants. 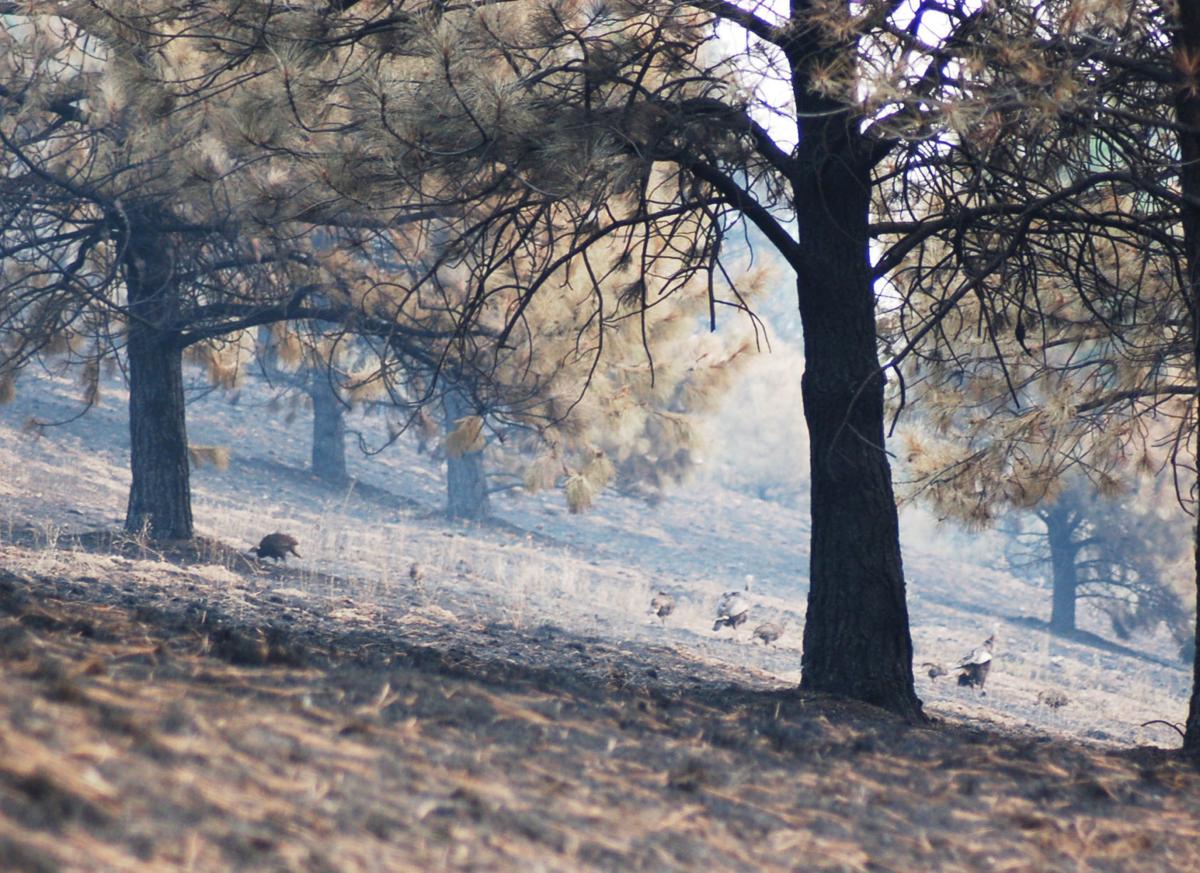 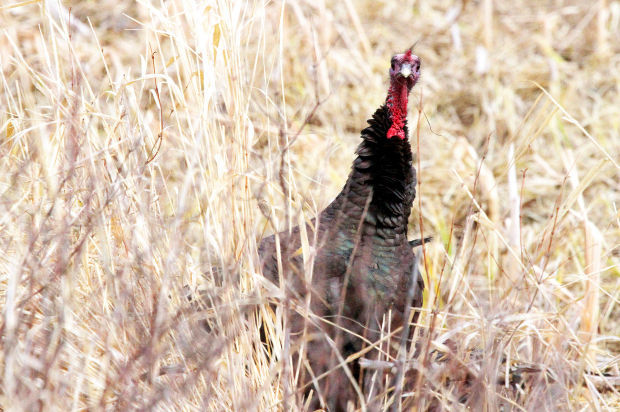 While it's not uncommon to see wild turkeys strutting around all corners of the Bitterroot Valley, it wasn't always that way. Volunteers from the Bitterroot Chapter of the National Wild Turkey Federation spent years bringing the birds into the valley and then moving them from place to place to ensure they would thrive. The chapter is now looking for the next generation to step forward and continue those efforts.

Pause for a moment to ponder, on this Thanksgiving Day, the guest of honor in the middle of the dinner table.

For most people, their turkey was raised on a farm, purchased from a local grocery store, and sports a little red pop-up timer inserted in its oversize breast.

But if it was one of the thousands of wild turkeys that roam in Montana, it took a lot more work to get it on your plate. And if it was shot during the short spring season, there could have been a whole lot of love involved, too.

“The springtime is the mating season, and that’s when people go out and set up decoys and do some calling,” said John Vore, the game bureau chief for Montana Fish, Wildlife and Parks. “If people go out now, that will not work or it will work minimally.”

Only male turkeys — toms if they’re mature and jakes if they’re not — can be taken during the spring season, which this year was April 13 to May 19. Tips on springtime turkey hunting are posted on the FWP website, and are downright amorous.

It notes that breeding toms “begin sounding off with lusty gobbles audible half a mile away on a still morning.”

And if the weather is cold, it “dampens the amorous attitudes of gobblers, making calling almost useless.” Instead, hunters are advised to stay home and work on their calls.

Hen yelps are “soft and plaintive” and should be done “pleadingly with medium-pitched sounds and with each perk ending on a rising inflection.”

“He’s trying to be vocal and build a harem of hens,” said Dave Nikonow, a wildlife biologist with the Montana branch of the National Wild Turkey Federation. “Just like elk go into their rut in the fall and are much more vocal, with bulls bugling and trying to build up a harem of cows.”

Nikonow said that turkeys are tough to bag at any time of year. The fall season started Sept. 1 and runs through Jan. 1.

“They’re elusive and have several different senses that make them difficult to hunt,” Nikonow said. “Their eyesight is very adept and you need to be very still; they pick up on movement.”

Their instincts also makes toms difficult to call in, since they’re usually the ones in the spring who are calling for the hens to come into a harem. And in the fall, toms are less likely to be called in by a hunter because it’s not breeding season.

“It’s challenging to be extra persuasive,” Nikonow said. “Males are not typically gobbling in the fall very often. I like that Montana offers the opportunity to hunt hens in the fall, but for most of the fall hunters who harvest them, it’s more opportunistic — they’re hunting for other things, then find a turkey.”

Calling them in isn’t the only challenge. Rifles aren’t legal in the spring season, so most turkey hunters use a 12-gauge shotgun. But turkeys’ vital organs are tucked under heavy, metallic-colored feathers, and toms have a “breast sponge” that actually works like a flak jacket, according to the FWP website.

“It’s a large mass of fatty tissue that helps them remain in prime physical condition during the breeding season,” FWP notes. “Wild turkeys also have blinding speed afoot and even a broken wing seldom results in a turkey in the oven. Because a turkey’s body is nothing less than a miniature armored tank, preferred areas to shoot at are a head and neck.”

By the way, the head and neck of a wild turkey, which are the largest North American game birds, are about 2 inches wide.

Despite their small heads, Vore said wild turkeys are smart.

“But if they haven’t been hunted, they are naïve,” Vore added. “That’s when people start to think they’re stupid. They’re not afraid of you, but they learn if they get hunted.”

Turkeys aren’t native to Montana but the Merriam breed was introduced by FWP in the mid 1950s.

“People wanted the opportunity to hunt them,” Vore said, adding that an unknown group also brought in wild Eastern turkeys in the Flathead area.

Today, wild turkeys can be found in the Rattlesnake, the Bitterroot, and just about every corner of the state. Nikonow said they like a diverse array of habitat, from Ponderosa pine forests to riparian areas.

Vore adds that they also like to roost in trees or on peoples’ decks — something that might seem cute initially.

“People like to have four or five turkeys in their yard and think it’s pretty cool, so they start to feed them. Then they get 30 or 40 turkeys in their yards and it’s not so cool because they raise heck with your yard with their scratching,” Vore said. “They like to roost on the balcony or roof and poop all over. They can be a real problem if they decide to move in.”

Although their population size is managed more by the survival of the young, nesting and hatching instead of by hunting, Vore said the state offers a lot of opportunities, with the potential of up to 12 tags to fill.

Nikonow adds that his organization strongly believes in recruiting new hunters “to make sure there’s a next generation of hunters to continue appreciation for wildlife” and to provide funding for conservation of critical habitat.

“Not just young hunters, but late-onset hunters or people who are coming back to hunting,” Nikonow said. “We see a big part of that with the ‘locavore’ movement. A lot of young adults want to know where their food comes from.

“We have pretty good opportunities throughout western Montana for turkeys. In the Bitterroot most of them on private land, but they’re also on public lands in the foothills of the Bitterroots and Sapphires. Even north of town — Ninemile, Huson, Superior — there’s quite a few opportunities. They’re a fascinating bird and you have even greater appreciation for them when you see them out in their habitat.”

The Ninemile Ranger District, as part of their seasonal prescribed burning to reduce fuels, promote vegetation regeneration, and enhance the h…

Sperry rebuild 'brings out the best in people'

GLACIER NATIONAL PARK – As “Sweet Home Alabama” blares outside from a nearby boom box, Kameron Kidrick affixes a metal base plate to a quarrie…

'Tell Us Something' teaches middle schoolers empathy through storytelling

Montana is home mainly to the Merriam species of turkey, shown here, although the Flathead region contains some Eastern turkeys. All turkeys in Montana are transplants.

While it's not uncommon to see wild turkeys strutting around all corners of the Bitterroot Valley, it wasn't always that way. Volunteers from the Bitterroot Chapter of the National Wild Turkey Federation spent years bringing the birds into the valley and then moving them from place to place to ensure they would thrive. The chapter is now looking for the next generation to step forward and continue those efforts.