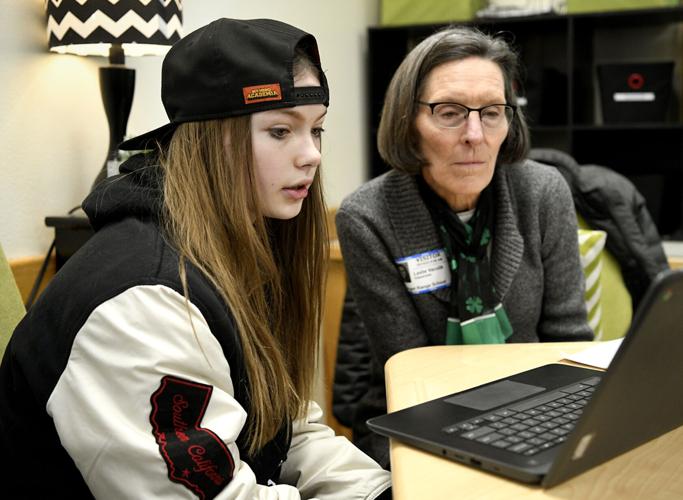 Leslie Vaculik, a volunteer with Writing Coaches of Montana, works with Target Range eighth-grader Colynn Kottas on her research paper on Tuesday at the school. 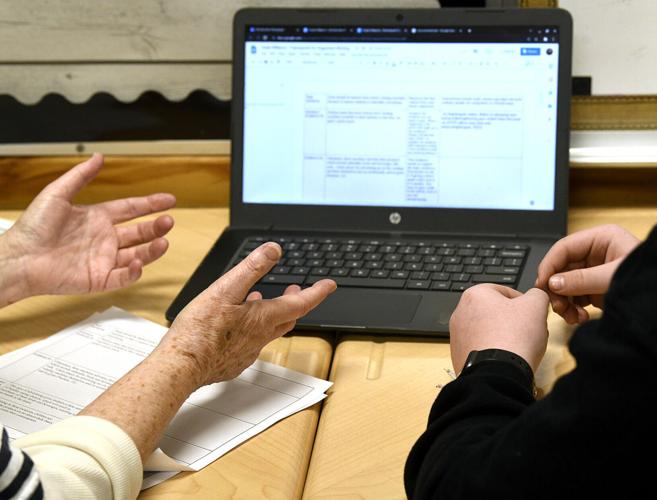 Volunteers with Writing Coaches of Montana help students with the mechanics of their writing and with making their meaning clear to the reader.

For the last two years, middle school students at Target Range have gotten extra help on their papers from volunteers with the Writing Coaches of Montana.

Jennie Belcourt’s eighth graders recently met with coaches to help them write argument research papers, where topics range from the Russian invasion of Ukraine to why shot clocks should be used in high school basketball.

“As a teacher with 20 kids in a classroom, you can’t conference with every kid, every day, and so kids slip through the cracks and you miss it,” Belcourt said.

“So to be able to collaborate where the kids get one-on-one with a coach who’s looking at it from a different point of view, different eyes than their teacher … is phenomenal for these kids,” she continued.

On Tuesday, nearly 60 students cycled between 17 coaches for 20-minute individual sessions to get tips on grammar, structure, audience and everything in between.

Avery Omlid met with his coach in the morning to work on his paper that argued for the use of shot clocks in high school basketball in Montana. It was the second time he’d met with a writing coach for his English class.

“Today we covered a lot, she helped me with my whole paper and got it so I have it all planned out,” Omlid said.

At first, he was nervous to share his writing with a stranger, but that anxiousness washed away with the kindness and care of his coach.

“They taught me that I need to focus on making sure the reader understands what’s happening,” Omlid said. “They brought a lot more into detail with me so it helped a lot.”

Students in Belcourt’s class didn’t shy away from taking on contentious topics.

Klara Beyer’s paper argued for access to safe abortions and Jemiah Belitz argued that smoking should be banned.

“I guess for me I just felt like a controversial topic could be cool to see both sides before I picked one to argue for,” Beyer said.

“I was going to write about plastic and how it should be banned, but I looked up what was the most common debris found in oceans and it ended up being cigarette butts,” Belitz said.

Both students spent most of their time with coaches focusing on introductory paragraphs as well as crafting topic sentences and transitions, they said.

“I usually have run-on sentences or sometimes get off topic. Like today, my writing coach could identify that from her perspective and helped me get a clearer transition to my next paragraph,” Belitz said.

For the last 27 years, Writing Coaches of Montana has collaborated with schools and teachers across the western half of the state. During the pandemic, the group shifted to a fully virtual approach, so now volunteers have the opportunity to work with students either in person or online.

The coaches range in professional expertise — some are writers but others have backgrounds in engineering or truck driving, Sheets said.

“The only thing that we really look for are great attitudes, great listeners, supporters of public education and students, but other than that, we try to have as many diverse backgrounds as possible,” Sheets said. “We want our students to see themselves reflected in coaches that they understand.”

Leslie Vaculik, a retired engineer, has been volunteering with Writing Coaches of Montana for about eight years. She first joined after some of her colleagues recommended she give it a try.

“But what has kept me in it is I think it is so fine to have these young people be willing to talk to us and let us work with them on whatever their paper’s about and what their concerns are,” Vaculik said.

There are roughly 150 writing coaches that volunteer with the program. Writing Coaches of Montana are planning to expand statewide and are always looking for new volunteers.

The next training for coaches is April 13 and those interested can email admin@writingcoachesofmontana.org for more information.

The latest surge caused by the highly contagious omicron variant peaked in Missoula County on Feb. 6, when there were 3,647 active reports.

Students in Frenchtown are able to earn college credit before they graduate from high school through a new program through Missoula College.

This is the first time a Hellgate Elementary robotics team has qualified for Worlds under their head coach Jordan Capp, a fifth-grade teacher.

No new deaths due to COVID-related illness have been reported since late February.

13 candidates file for MCPS school board election, levies to be considered

The school election will be conducted through mail-in ballots that must be received by the Missoula County Election Office on election day, Tuesday, May 3.

Elementary trustees present at the meeting unanimously approved running a $294,791 levy, which would have an approximate annual tax increase of $2.78 on properties with an assessed value of $100,000.

One in every four water faucets in Missoula County Public Schools buildings has been turned off after test results indicated the water they produced contained high levels of lead.

New 'invisible fiber' will change the way we eat food

New 'invisible fiber' will change the way we eat food

Leslie Vaculik, a volunteer with Writing Coaches of Montana, works with Target Range eighth-grader Colynn Kottas on her research paper on Tuesday at the school.

Volunteers with Writing Coaches of Montana help students with the mechanics of their writing and with making their meaning clear to the reader.