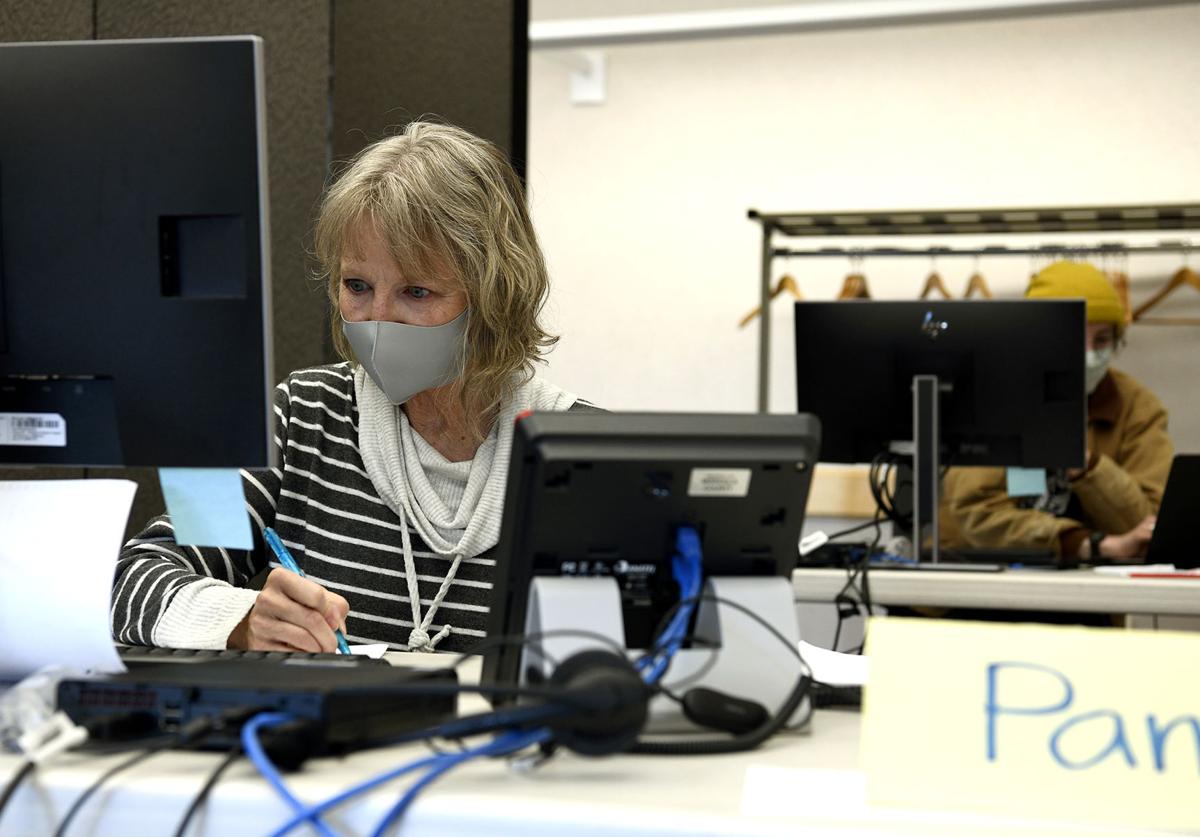 Pam Protheroe helps members of the public set up COVID-19 vaccinations at Missoula County's call center recently. Call center staff said they've had people cry when they get their first appointment, and they sometimes help appointment seekers who seem lonely and want reassurance. 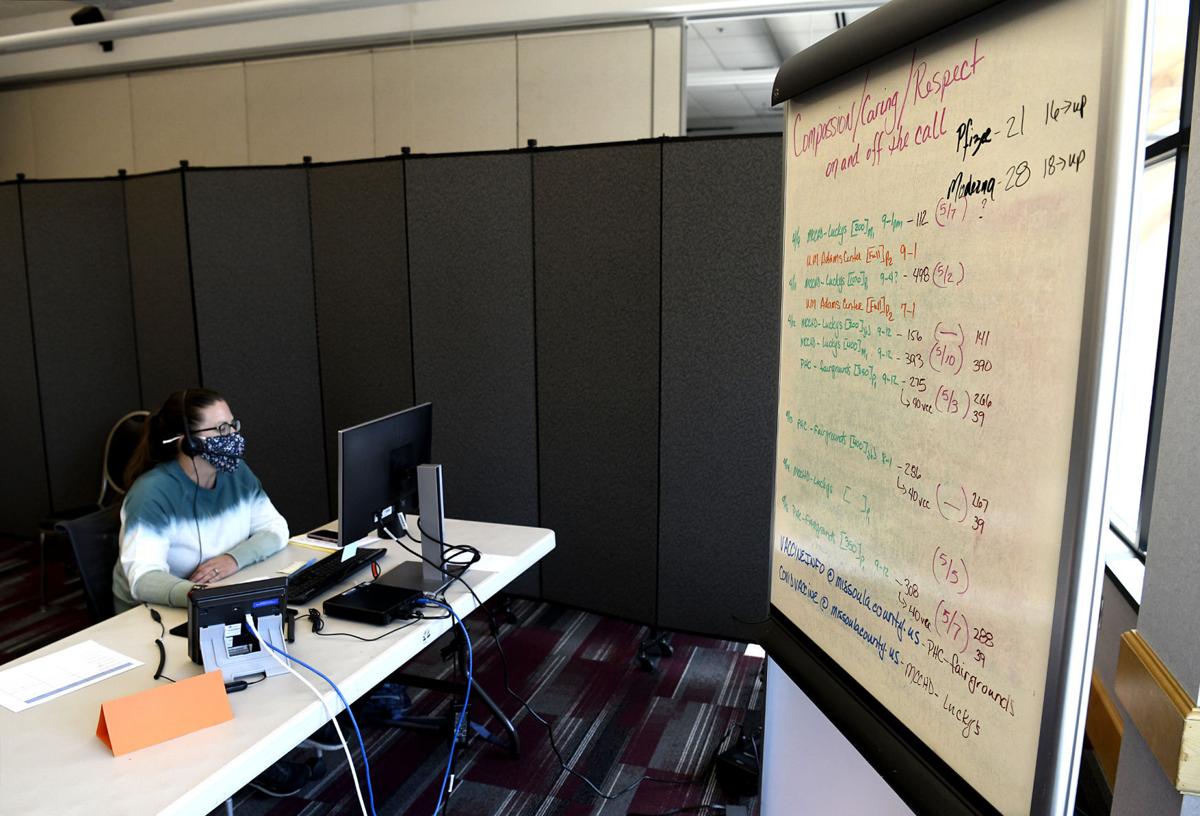 Katrina Arnold takes vaccination appointment calls in front of a white board detailing how many doses are available at all locations inside Missoula County's call center recently.

Their challenge was to get as many shots in arms as quickly as possible.

The group's 25 members came to be known as the Missoula County vaccine coordination team. They are based in Missoula, normally deal with wildfires or other natural disasters, and rarely deploy longer than two weeks. They were dispatched in 2018 to help with Hurricane Mitchell in Florida.

But now the mission was in their own backyard.

"(The vaccine rollout saw) a very decentralized approach from the federal government down to the state down to the local, with lots of different players, all having their own objectives and their own different measurements of success," said Adriane Beck, Missoula County’s emergency management director.

"And so our goal was to bring all of that into one, centralized location so that we could communicate with the public so they could find it easier to get connected to a vaccine when it was their turn."

After 94 days, the vaccination coordination team is turning over many duties to the Missoula City-County Health Department, now that the COVID-19 vaccine is widely available for everyone in the county.

As of Thursday, 32,807 people in the county were fully vaccinated and an additional 20,148 had received their first COVID-19 shot. Around 53% of the eligible population in the county is at least partially protected from the virus. In comparison, around 38% of the eligible U.S. population has received at least one dose of the vaccine, according to a New York Times tracker.

Beck and other members of the team stressed the work is not over.

"I think what we were tasked to do and what we feel like we've done is established the infrastructure in a scalable fashion so that it is widely available," Beck said. "But just because it's available, doesn't mean that we're done. We still need to make sure that we get a sufficient number of our residents vaccinated."

The COVID-19 vaccine started to become available in Montana in December of 2020.

It began as a trickle, as the state received around 10,000 doses in the middle of the month to start. But as that number grew, it became clear an organized response was going to be needed to set up vaccination clinics.

Getting the 27 vaccine providers in Missoula County organized was the first task. A weekly conference on Tuesdays was set up and information was funneled back to the team.

This allowed vaccine to be distributed in an efficient way. In one instance, All Nations Health Center did not have enough vaccinators but did have supply and the information on file of those who were eligible at the time for the shot.

The health department was able to work with All Nations to speed up the rate of vaccinations. The University of Montana's Skaggs School of Pharmacy became an important partner as well.

Students were brought on as temporary employees. The Missoula Fire Department provided support for clinics too.

The team often solved logistical problems, including how to balance first-dose vaccination clinics with those seeking their second shot.

This constant communication also became critically important once Partnership Health Center began receiving direct federal vaccine supply. At one point, Partnership Health was getting almost as much weekly vaccine as the health department was from the state.

"When you talk about how we got here so quick, that federal vaccine supply coming in and PHC being in a position to be part of that program and then us to support them to increase their capacity, I think is really a testament to how we got to where we are in the amount of time we did," Beck said.

Changes to the phased approach of vaccinations happened quickly and occasionally without much warning.

In early January, when Gov. Greg Gianforte changed phase 1B to include individuals age 16-69 with certain preexisting conditions in addition to the 70+ age group that was already eligible, phone lines at the health department immediately lit up.

A call center was set up early in the vaccine team's mission, which relieved the health department of many calls. A website, covid19.missoula.co, has been used to help disseminate the flood of information to the public. It has become a landing page for those interested in vaccination.

Liaison officers worked to build relationships with local health care providers, and that information ended up on the coordination team's website.

Traffic to the website and calls to the center increased dramatically whenever the state went through a phase change. When Phase 1B+ was added by the state in mid-March, for example, the team did not know it was coming.

Communicating correct information to the public was difficult. Outside of issues associated with phase change, vaccine supply was also hard to predict.

"We didn't know how much vaccine we were getting more than a few days ahead of time," said Nick Holloway, a public information officer with the vaccine coordination team. "So we weren't planning out two weeks at a time and so we were just trying to keep up with what was going on with vaccine coming in and clinics coming up. That worked for a little while.

"But then we just had to start doing some more generalized messaging because it was sort of all over the place. One of the challenges early on was having people understand where they fit in the phase system."

Those in public information roles with the team, like Holloway and Missoula communications director Ginny Merriam, worked closely with those in communications at the University of Montana, local health care providers and other government entities.

"We had to be super nimble every day," Merriam said. "Every person is highly trained in the job he or she does. It's almost like joining the army for 94 days."

One of the biggest questions Missoula faces in the coming months and years is what it will look like once the pandemic has passed.

Missoula County urges public to get a COVID vaccine

A new Missoula health department campaign seeks to push back against COVID-19 vaccine misinformation and help educate the public on how to get a shot.

The Missoula City-County Health Department announced on Monday that it's implementing a shorter quarantine for close contacts to COVID-19 cases.

UPDATED: D'Shane Barnett to be next Missoula County health officer

The city of Missoula will receive around $14 million in federal funding from the American Rescue Plan Act of 2021, while Missoula County likely will get around $23 million.

'We just felt that it was a good time'; Health department expands on vaccine decision

For the Missoula City-County Health Department and the county's Vaccination Coordination Team, the time was right to push Missoula County into opening up COVID-19 vaccinations for all.

After officially filing for mayoral candidacy on Thursday, Jacob Elder expands on his decision to run for office.

Missoula is in the first stage of planning changes to the stretch of Higgins Avenue between Broadway Street and Brooks Street.

On Wednesday, the Missoula City-County Health Department is partnering with Imagine Nation Brewing Company to hold a "Vaccine Fiesta" from 5 to 8 p.m.

Montana passed another milestone Wednesday in the push to vaccinate the state's population, as the 10,000th veteran in the state received a sh…

More than half of eligible Missoulians vaccinated

At a morning press conference, the county reported 52.3% of individuals age 12 or older are fully vaccinated and 61.1% have had at least one dose of the vaccine.

Pam Protheroe helps members of the public set up COVID-19 vaccinations at Missoula County's call center recently. Call center staff said they've had people cry when they get their first appointment, and they sometimes help appointment seekers who seem lonely and want reassurance.

Katrina Arnold takes vaccination appointment calls in front of a white board detailing how many doses are available at all locations inside Missoula County's call center recently.