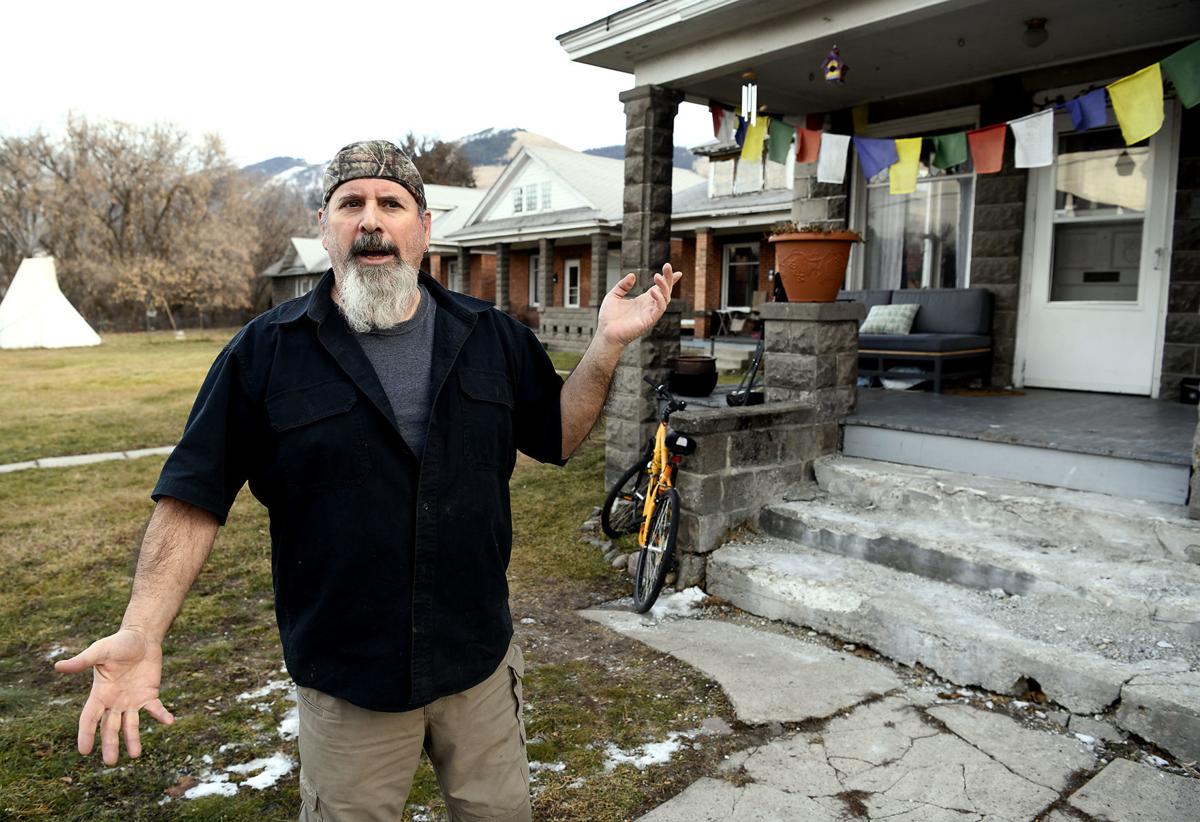 Jeff Gardner talks Wednesday about the apartment he's lived in for the last 20 years on South Fourth Street East and the proposed condominium project that would replace the building and five other historic homes. The owner is requesting the City Council rezone the properties to build a four story, 48-unit condo project with underground parking. 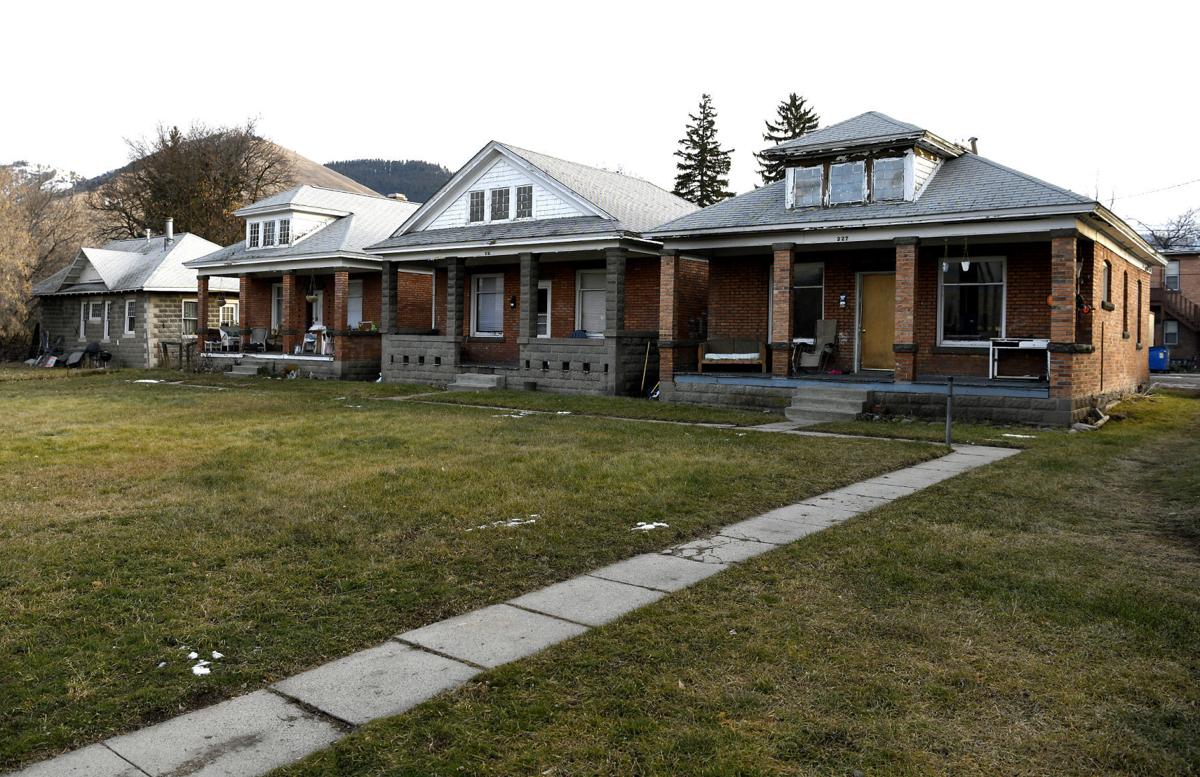 The buildings being proposed to be moved or torn down on South Fourth Street East include homes built for Milwaukee Railroad workers in 1908.

Jeff Gardner moved into his one-bedroom apartment 20 years ago. He can remember looking across the river from his front porch on South Fourth Street East, a view that then featured more of the Rattlesnake Mountains, and less of the glassy high rises now prominent on the downtown skyline.

“This was kind of a backwater spot,” Gardner, 61, recalled. “There were hobo camps down in the ditch by the river, the old railroad. It was kind of a scary place and people didn’t want to come down this way, but that made it affordable.”

The river trail system cleaned up the area, he said, and he helped plant the steep edge of the property with native plants and grasses, which he salvaged from the subdivisions popping up in Grant Creek, uprooting the plants before the backhoes got there. Now, he said it's a trendy place to live.

The brick apartment building, built in 1908 for Milwaukee Railroad workers, has seen better days, he admits. The stone steps are chipped into a jagged bevel from a century of footsteps and snow shovels, and the three matching rental houses next door are badly in need of a paint job on their wooden dormers.

But he says that was probably by design.

“They didn’t keep them up,” he said standing outside the place he’s called home since 1999. “They just sat on them until it was time to sell and bail. That gives the developer the excuse. He can say it costs too much to restore and it’s easier to just tear it all down.”

The current property owner, luxury Realtor and former star quarterback for the Griz, Cole Bergquist, is asking the City Council to rezone the properties and give up some pieces of adjoining city property so he can build a four-story, 48-unit, upscale condo project with an underground parking garage that will fit more than 70 cars.

On Wednesday, Missoula City Council members heard a list of concessions with which Bergquist may be willing to bargain to secure approval of his plans.

Facing public backlash at the prospect of losing six historic buildings and some of the most centrally located housing affordable to the average Missoulian, the developer appeared willing to prioritize four of the rental condo units for federal housing voucher holders, as well as to dedicate funding to help move the historic buildings off the property intact, and let the city dig up the native prairie Gardner planted years ago and use it for restoration projects elsewhere.

Despite the concessions, some locals who spoke at the Public Works Committee meeting didn’t think the conditions were adequate, noting that if no one is willing to move the houses, they’ll be torn down and have the materials incorporated into the condos.

They also pointed out that the affordable housing promise, giving voucher holders priority for 30 days, wouldn’t stop the landlord from including other insurmountable criteria for approval until they can open it up to a wider audience at market rate.

Nick Kaufman, a senior planner at WGM Group shepherding the project through the public process, said the development team is working to incorporate as much community input as possible in the design phase.

"We've been working diligently in conversations to address concerns that have been raised through our meeting with the University Neighborhood Council, as well as a meeting we held at the senior center a few weeks back," Kaufman told council members Wednesday.

He said the condos were aimed at providing housing downtown for a "diverse population," though people who have spoke Wednesday and at previous meetings pushed back on that idea, pointing out that at the average Missoula salary, just north of $40,000, the condos speculated to be priced in the high six figures would be accessible to very few Missoulians, and would be more likely bought up by wealthy out-of-staters.

The condos would certainly be out of reach for the current residents of the property. Gardner said that when he began renting his one-bedroom apartment in 1999, he paid $395 in rent each month. Twenty years later, as a janitor he can still afford the rent, though it has risen to more than $600.

Last week, Kaufman told the city-county planning board that current tenants were offered financial assistance to help move when the time came. But at that meeting, one resident said he never got such an offer. Gardner said he had not, either.

"We got a phone call from the owner saying it was going to be developed, and we could get on an inside track for one of the condos," Gardner said. "That's definitely not going to happen unless I get some kind of serious financial assistance."

And while Gardner lamented being forced to leave the home he loves, where he said he can walk down to the river and take a swim, walk to work and enjoy one of the best views in the city, he said that's not his biggest concern.

"I’m sure there's a segment of the population that thinks these places are an eyesore, some rundown slum, and they’d be happy to see them gone," he said. "But some of us didn't come here for the amenities, we don’t need a brewery on every block, but now it needs to be so fancy folk can live here. It’s losing the old Missoula character. That’s what upsets me the most."

Wednesday's meetings were informational, so any conditions the City Council chooses to impose on the project are still in flux. But the council is scheduled to take action on the proposed project Monday, Dec. 16, at its 7 p.m. meeting, where it will hold a full public hearing before voting on the rezone and right-of-way vacation.

The 48 high-end condos in Missoula would see the iconic century-old brick homes on the property demolished or moved off site.

The 57.5 acre hayfield is set to become a neighborhood of townhouses, single-family homes, and apartments with parks and neighborhood businesses.

The project would include a 75-spot underground parking garage, with 25% of units slated for rentals.

A 70-year-old Marion man died Wednesday after a head-on collision with a logging truck, according to Montana Highway Patrol.

Prison guards at Crossroads Correctional Center near Shelby found pro-ISIS notes in the cell of a 21-year-old man awaiting sentencing for lying to the FBI, according to court documents.

Campbell "Camp" Howard was hired in January 2017. He died suddenly over the weekend, University of Montana's Vice Provost for Student Success Sarah Swager said in an email to staff this week.

The Higgins Avenue Bridge renovation project may be on hold after the only bid came in about $21 million higher than expected — more than double the state’s estimate.

One of the oldest churches in Missoula is closing a sale on its downtown building after 129 years of worship at the corner of Woody and Pine.

Zoning to allow for higher-density housing on the 4.7-acre property that's home to Blessed Trinity church and a community garden was approved Monday by Missoula City Council.

The Missoula City Council voted unanimously Wednesday to approve rezoning the area now occupied by brick homes on South Fourth Street East, along with vacation of the rights of way, to make way for a four-story, 48-unit upscale condo building.

Jeff Gardner talks Wednesday about the apartment he's lived in for the last 20 years on South Fourth Street East and the proposed condominium project that would replace the building and five other historic homes. The owner is requesting the City Council rezone the properties to build a four story, 48-unit condo project with underground parking.

The buildings being proposed to be moved or torn down on South Fourth Street East include homes built for Milwaukee Railroad workers in 1908.