Become a Member
Read Today's E-edition
Share This
The value of a neighborhood school: Celebrating 100 years of Paxson Elementary
0 Comments
Share this
1 of 2 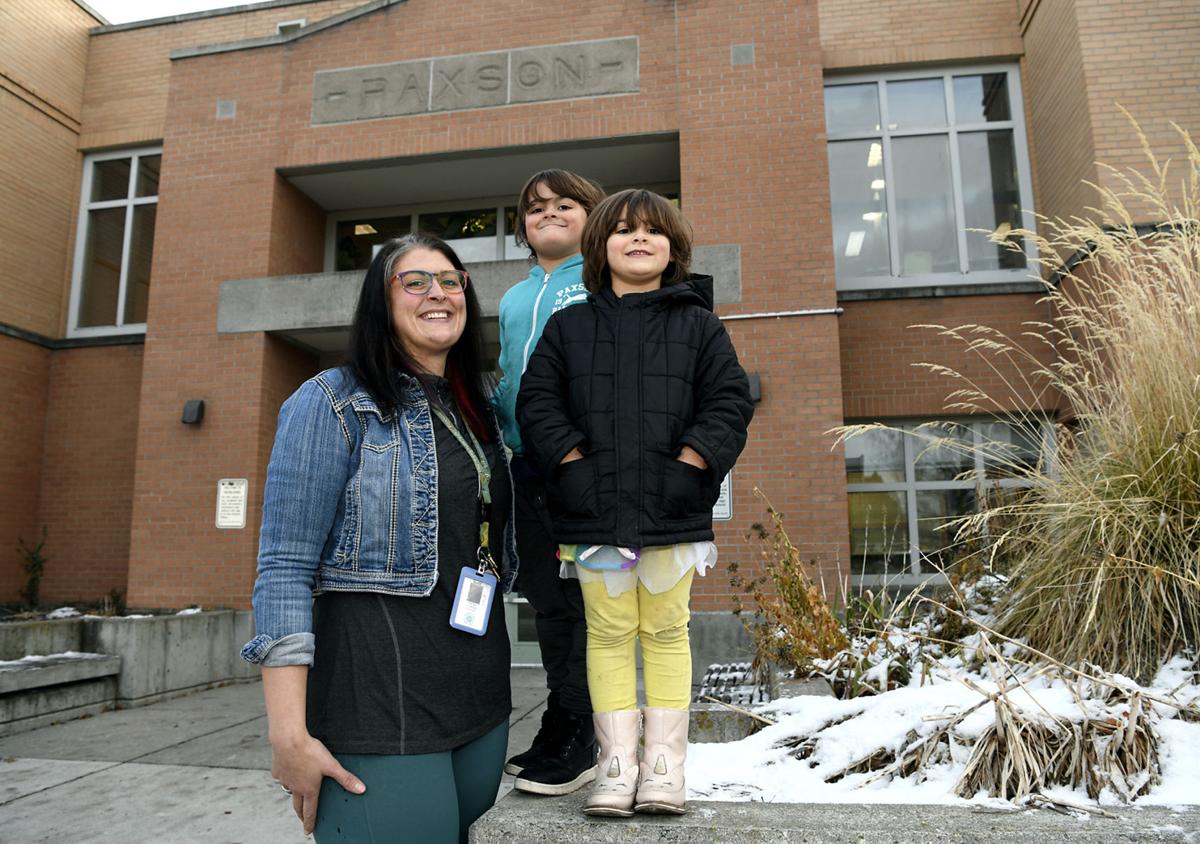 Petey Torma, a fourth-grade teacher at Paxson Elementary School and former student at the school, stands with her children Tallis Parkey, a first grader, and daughter Luna. 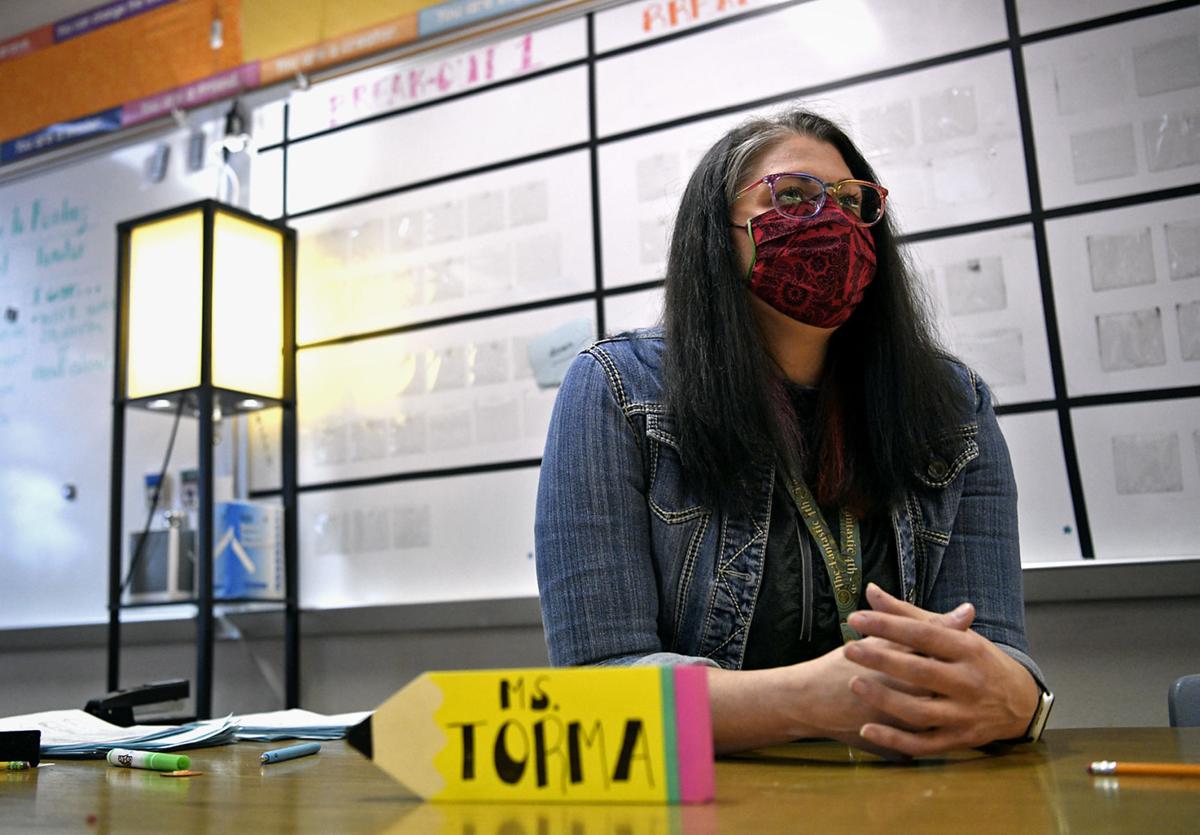 Over the last century the building has obviously changed, as have the staff and students that fill the classrooms and hallways each passing year.

“But what has remained the same is that feeling of community and that closeness that we have together,” said Petey Torma, a fourth-grade teacher at Paxson.

Torma has a pretty good read on the school and its position in the community — in fact the school has been in her orbit for over 30 years now.

“I just remember it always felt so great to be going to this school because it was like everyone in the school were friends you saw out and about at the parks and who you’d been friends with before school started,” Torma recalled.

She first stepped foot into the school in 1988 as a kindergartner. Now, she’s at the school as a teacher and mother, whose current classroom is the site where she herself attended fifth grade. Her oldest child, Tallis Parkey, attends first grade at the school and her daughter Luna will begin kindergarten next year.

In the late 1980s, the “Paxson Problem” was coming to a head. The building was no longer up to code and the student population was bursting at the seams. As a student, Torma experienced that tumultuous time first hand.

By 1991, the old Paxson building was torn down and rebuilt at the same site. Students at the school were scattered across the community during construction. Torma’s family temporarily relocated to New Mexico when her mother pursued a master’s degree.

When they returned to Missoula, the construction was complete and Torma was ready to start her fourth-grade year in a brand new school.

“I just remember everyone feeling so excited for fourth grade because we were all coming back together," Torma said. "We’d been in different places and we were so excited to see each other and we got to be the very first ones to use the new building.”

She remembers all of her teachers at Paxson, but her first-grade teacher Mrs. Virginia Jensen left a lasting impact on her and her classmates growing up. Jensen retired from teaching after 35 years; she died in May 2021 at the age of 92.

Following her death, Torma and her former classmates swapped their favorite memories of Jensen.

“Resounding comments from everybody that I went to school with was that, ‘She just made me feel so special, she made me feel like everything I did was important,’” Torma said. “We found out that she was there for everybody.”

They recalled Jensen attending their eighth-grade promotions, high school graduations and even a few college graduations.

Torma remembers Jensen’s classroom in the annex, due to the swelling population. During fire drills Jensen would lift students up one-by-one to climb out the window.

“Can you believe that we did that?” Torma said through a laugh.

Ultimately, Jensen is one of the reasons why Torma became a teacher, she said.

As a student, Torma would have never even thought she would later return to the same school to teach. Her dream job growing up was to work with the Missoula Children’s Theatre as a tour actor and director to teach kids across the country, and globe, about live theater, which she ultimately did after college.

“I got to see all 50 states and I got to go overseas to Japan, Korea and Guam with the whole goal of working with teachers, working with administrators, seeing schools and communities and living in them and I wanted to find where I wanted to settle down.

“Nowhere was better than here. We just have ... this golden town, this beautiful little place, that when I was done touring it was like, I just want to be back in Missoula, working in that town,” Torma continued. “It’s got everything that I wanted.”

The neighborhood-driven effort to rebuild Paxson at the same site in the 1990s is indicative of that value, which is still alive and well today, according to Missoula County Public Schools Superintendent Rob Watson.

“Like any school, staff members will change over the years, however, the positive culture of the school remains intact,” Watson said. “I believe this speaks to the incredible foundation that was built at Paxson so many years ago. It continued to provide an excellent education for the children of the neighborhood — something that I’m sure was started 100 years ago.”

Julie Robitaille, Paxson’s principal, agrees that the school’s location is key to its identity. Although she’s only in her second year at Paxson, she’s noticed that neighborhood pride. Each day, she greets students as they arrive in the morning to start their day on a positive note.

“My favorite aspects of being the principal at Paxson include building on the great work our staff and my predecessors have accomplished to make Paxson the amazing school it is today,” Robitaille said.

The school’s Parent-Teacher Association is also an indicator of Paxson’s impact on the community, Torma said. The PTA recently completed two phases of playground equipment upgrades and is currently raising money for the final phase to incorporate a nature-based play area.

That sense of pride for Paxson, and Missoula as a whole, has also been picked up by the students, Torma said. Students in fifth grade started a fundraiser called Trees for Missoula. The partnership with the City of Missoula shares tips on proper pruning and care, and helps plant replacement saplings for boulevard trees around town.

Given Torma’s long-standing relationship with Paxson as a student, mother and teacher, it's no surprise that she feels a deeper sense of connection with her students.

“It’s a huge responsibility to hold and you really have to walk with it very lightly," Torma said. "It’s exciting though to know that you have the potential to reach out and do good for all those students that walk into your door.”

“I think it’s always fun as a teacher to walk in (to your classroom each year) and you get a unique class of individuals,” Torma said later. “But you also get these glimmers of every other student you’ve had in the past through them, too, and how they remind you of the kids that you used to teach or the kids you went to school with.”

School kitchens across the state are looking for new ways to incorporate healthy, locally sourced ingredients in their daily recipes, including the staff at Target Range School District.

A Milltown resident announced that they are withdrawing their candidacy to serve as a Missoula County School Board trustee just six days after filing following allegations of rape and violence.

'I could do big things': Polson High senior receives full ride to Northwestern

After nearly three years and three rounds of cancer treatment, 14-year-old Jack Berry is cancer-free and ready for his life to return to normal.

About 250 of the degree candidates walked across the stage to receive their diplomas, while a majority opted for virtual participation.

The district posted 128 new cases of COVID among students and staff between Jan. 3 and Jan. 7. As of Monday afternoon, MCPS reported 96 active cases.

Seeley-Swan High School and the Lifelong Learning Center are the only two campuses not impacted by the closure.

Missoula County Public Schools trustees met for fewer than four minutes at their regularly scheduled meeting on Tuesday night because trustee Mike Gehl refused to wear a mask in the boardroom.

New COVID cases at MCPS this week are already outpacing what was reported last week, and on both Friday and Monday the district had a record number of staff absent.

The OPI’s licensure office has recently come under fire with concerns highlighted by two letters written by groups of school superintendents from around the state.

Petey Torma, a fourth-grade teacher at Paxson Elementary School and former student at the school, stands with her children Tallis Parkey, a first grader, and daughter Luna.