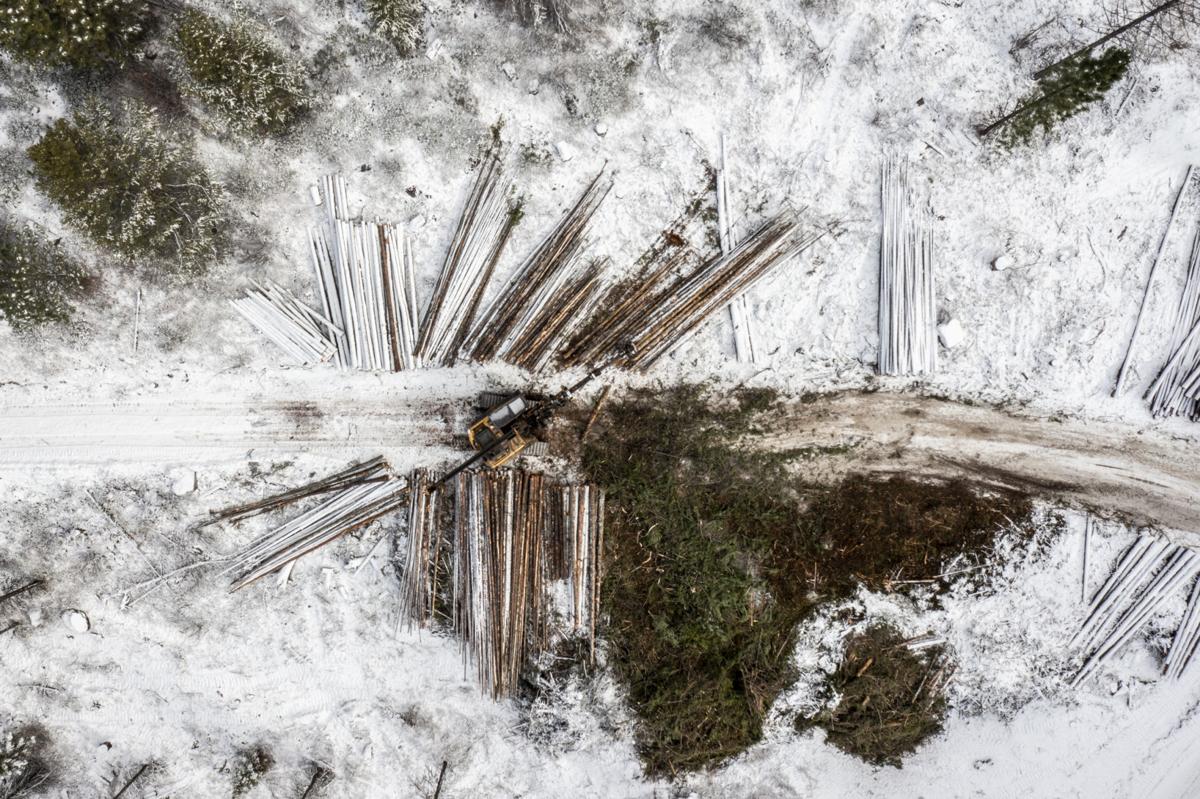 Logs for tipi poles, firewood, fences and lumber sit next to logging equipment at the site of the Cow Saddle Terrace Stewardship project in the Gold Creek drainage on Wednesday morning. 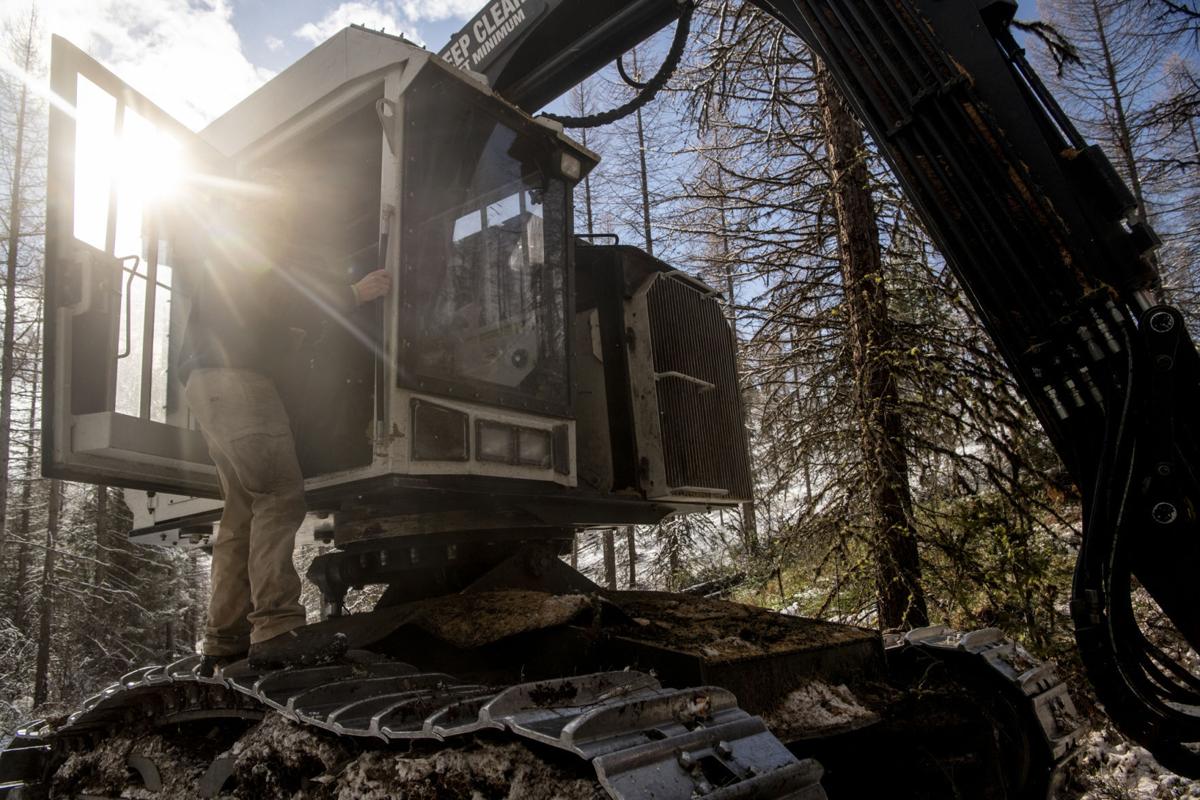 Mike Stoker prepares his feller-buncher to cut trees on a BLM forest thinning project in the Gold Creek basin northeast of Missoula. 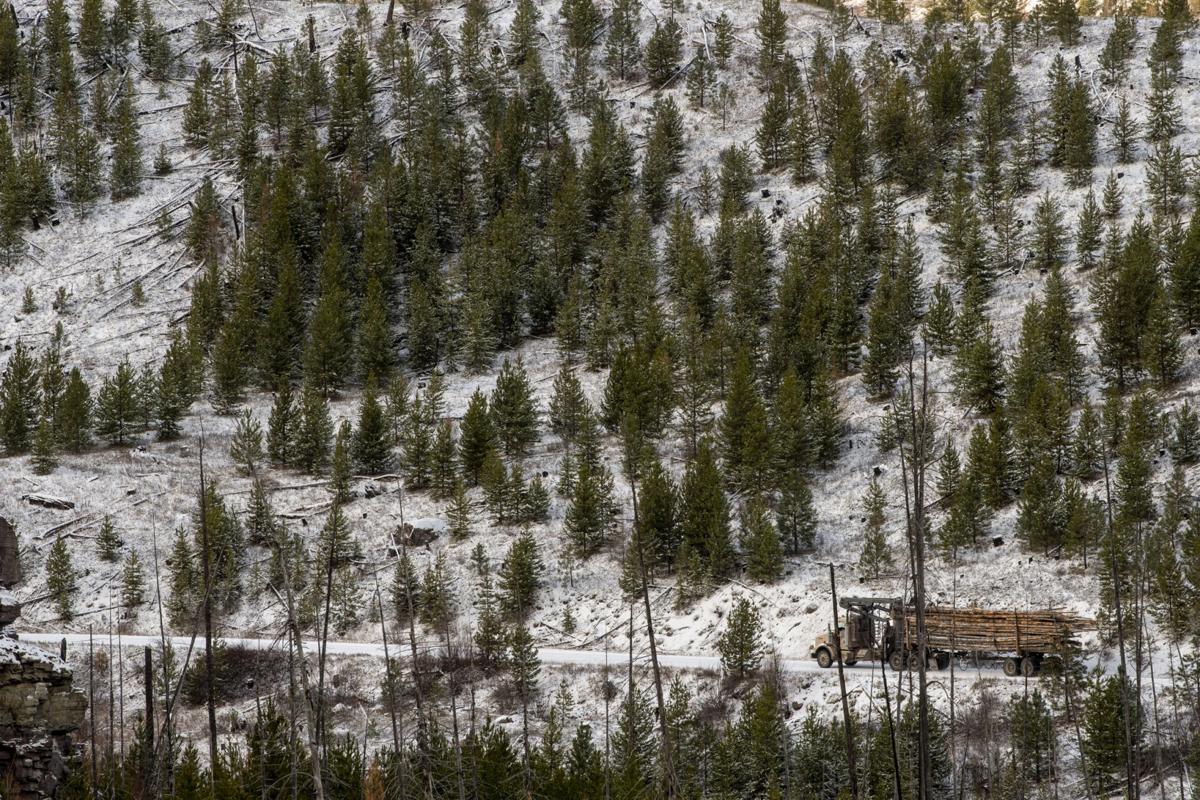 A truck loaded with timber drives down the Gold Creek Road, headed for Stevensville.

“That’s the nickels, that’s the dimes, that’s the quarters,” he said, pointing at stacks of de-limbed trees destined to become tipi poles, fence posts, firewood and lumber. “The pennies go to Bonner.”

Those “pennies” — trunks too spindly to make a single 2x4 — used to remain on the hillsides above Gold Creek when Plum Creek Timber Co. and its predecessors were cutting massive pine trees for the plywood mills in Bonner. Today, the mill yard is covered in pennies, and Stoker and his brother Mike make a living cutting, sorting and selling the logs they once left behind.

Instead, what they leave behind are slopes with mature western larch, Ponderosa pine and Douglas fir trees spaced 30 to 50 feet apart at random intervals. The spacing mimics the stumps of the old-growth trees cut in the industrial logging days.

“This is not a timber sale,” BLM Forester Kyle Johnson said. “It’s a stewardship project. It’s based on the relationship we have built with the Stokers, and the relationships they have with small mills.”

Without those relationships, BLM would need to spend between $700 and $1,500 an acre to thin the forest. Finding markets for the little trees, and loggers to cut them, brings the taxpayer cost down to $60 an acre, Johnson said.

The Stoker brothers’ worksite covers 735 acres in the rolling hills above Primm Meadow. Gold Creek visitors flock to Primm for its legacy grove of Ponderosa pines, some 5 feet in diameter, that recall how the basin used to look before Montana’s railroads, mines and sawmills put its forest to other uses.

“This used to be a clear-cut in the ‘80s,” James Stoker said of the dense stands of trees covering the slopes. “Back then, 90% of this would be in the brush pile.”

Back then, the Gold Creek landscape was dominated by private timber company ownership. In the early 2000s, a series of congressionally funded land exchanges transferred much of the basin to the Nature Conservancy. Since then, TNC has been returning the land to public ownership. The Bureau of Land Management acquired about 20,000 acres through the federal Land and Water Conservation Fund.

“Restoration is the right way to look at this,” BLM Field Manager Erin Carey said. “We’re looking at benefits for wildlife, for recreational opportunities, especially with this being Missoula’s back door, and sustained yield of forest products. It’s forest restoration with a multiple-use objective.”

It could have significant impact on the ecology of the basin as well. The scar of the 2017 Liberty fire can be seen from the worksite, with no live trees for thousands of acres. Johnson said thinning as much as 95% of the post-logging-era growth should give the remaining mature trees a chance to survive such a fire, by restoring conditions closer to what the Salish and Kootenai Indians maintained by traditional burning. BLM consults with the Confederated Salish and Kootenai Tribes on the management goals of the project.

This kind of restoration works at very small scale, with lots of automation. Mike Stoker cuts the trees while sitting in a feller-buncher, which looks like a tracked excavator with a circular saw where its shovel would be. James Stoker’s son, Riley, picks them up by the dozen in a swing grapple skidder — an articulated claw on four huge wheels that can snake up and down hillsides. James runs the de-limber, which picks up trees, strips off their branches, cuts them to length and places them in each of the sorting piles.

Independent truckers come to the landing and load what their individual mills want. One load might reduce to 14 cords of firewood in Stevensville. Another heads for a fence post mill in Drummond. A different driver will haul 28-foot-long, 4-inch-diameter poles to a tipi maker in Deer Lodge. And a few will go to Pyramid Lumber Co. in Seeley Lake to become boards.

“I’ve been logging for 30 years,” Mike Stoker said. “This is my favorite job right now. If this was my property, this is exactly what I’d do.”

Eureka superintendent retiring due to division over COVID-19

Since the onset of the pandemic, school board meetings across the country have become ground zero for the country's culture wars, with COVID-19 restrictions such as mask mandates emerging as the most prominent point of contention.

Missoulians may be forgiven for wondering if their cross-town neighbors lost touch with reality during Monday night’s weather event.

Both public access and timber work will remain on 27,289 acres of forest near Libby through a new conservation easement with the Trust for Public Lands.

The wind from Washington, D.C., blows through Montana’s forests, and it smells like money.

Logs for tipi poles, firewood, fences and lumber sit next to logging equipment at the site of the Cow Saddle Terrace Stewardship project in the Gold Creek drainage on Wednesday morning.

Mike Stoker prepares his feller-buncher to cut trees on a BLM forest thinning project in the Gold Creek basin northeast of Missoula.

A truck loaded with timber drives down the Gold Creek Road, headed for Stevensville.