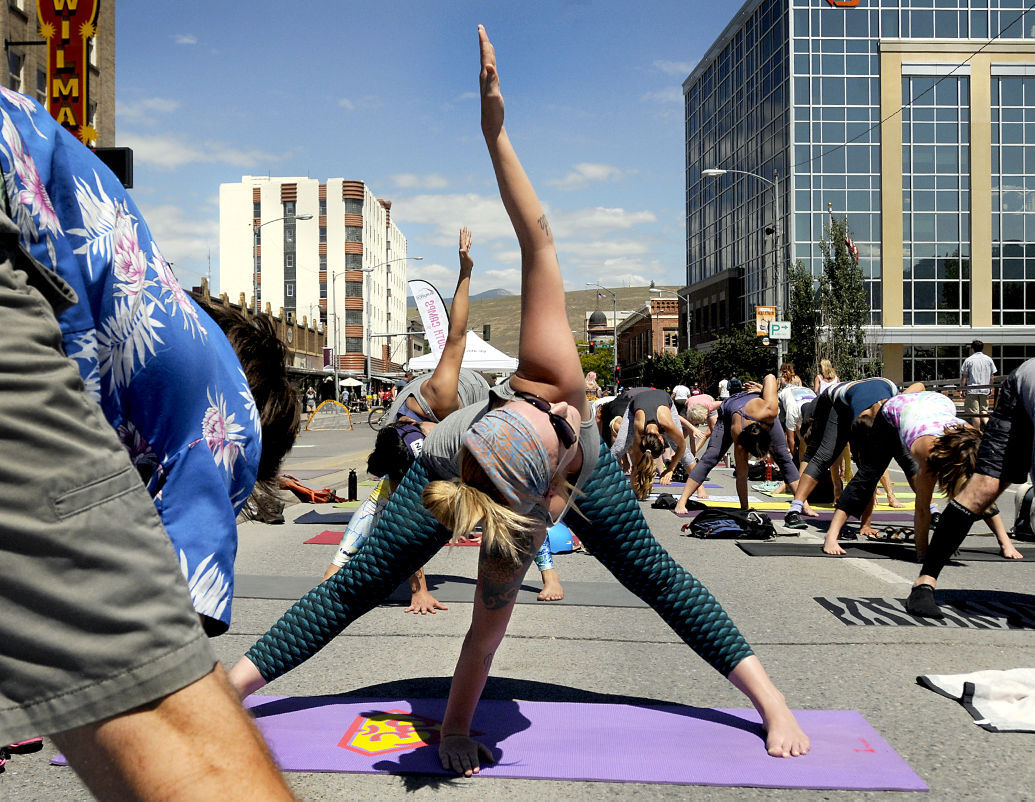 Samantha Rivers joins several dozen others in 2015 for Yoga on the Bridge as part of Sunday Streets. The annual event is coming to the Franklin to the Fort neighborhood on Aug. 8 from noon to 3 p.m. and will activate one mile of neighborhood streets starting and ending in Franklin Park. 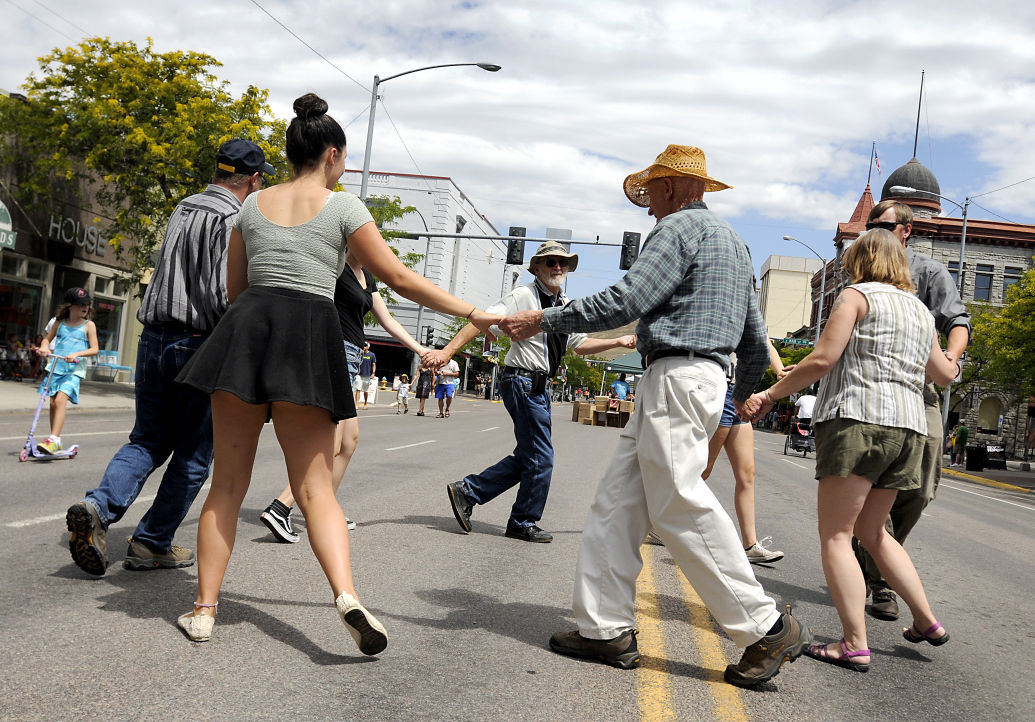 Dancers do-si-do to the direction of a square dance caller. 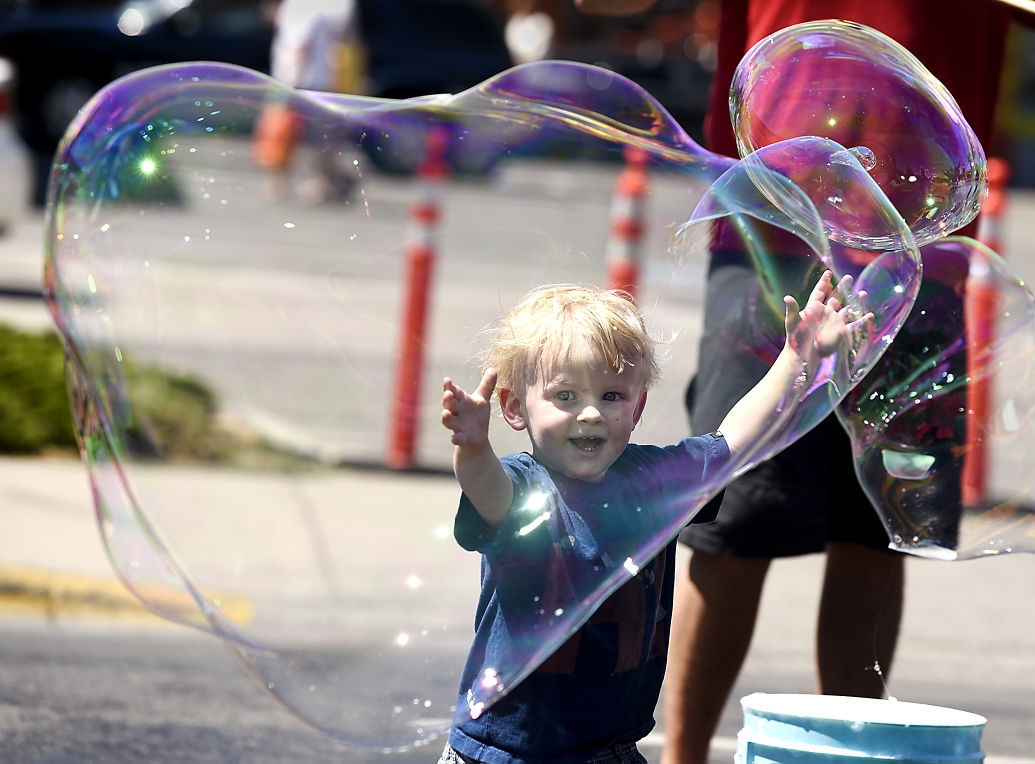 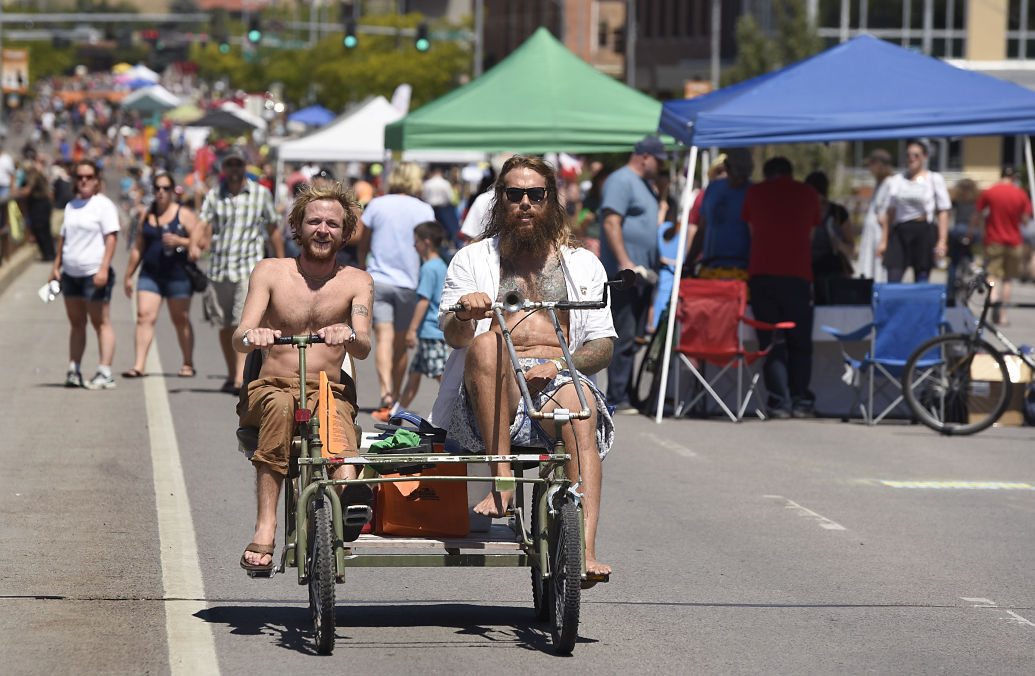 Thousands showed up for the afternoon designed to promote active forms of transportation.

Nate Reynolds pushed his daughter Clara in a stroller down Higgins Avenue on Sunday. Unlike most of their trips downtown, when they would be up on the sidewalks, the Reynolds family walked in one of the car lanes as they passed through the intersection of Higgins and Front Street.

“It’s always fun to get a coffee and wander but it still feels weird to walk in the street,” Reynolds noted.

The Reynoldses were taking part in Sunday Streets, which closed the downtown portion of Higgins for an afternoon of pedestrian-friendly fun.

Food vendors, live music, nonprofit organizations, yoga classes and even a game of bicycle polo popped up all down the street. Elements Board Shop and Edge of Missoula both set up ramps and rails in front of their stores, turning their blocks into impromptu skate parks.

Sunday Streets is designed to promote active forms of transportation, as well as to benefit community health and local businesses. Sunday was the 10th time the event has been held.

According to Missoula in Motion, which organizes Sunday Streets, around 8,000 people participated in last year’s event. The group has surveyed event participants and found that one-third of downtown businesses see a 25 percent increase in profits during Sunday Streets, with 36 percent of people who take part saying they spend at least $10 while wandering the open blocks.

Higgins was closed from the red XXXXs to South Fifth Street East for the afternoon, although cars were allowed to cross Higgins at its intersection with West Broadway.

At the corner of Higgins and Fourth Street, Matthew Nord, founder of Tangled Tones Music Studio, invited passersby to stop for a drum rhythm workshop in which everyone took a seat in a circle and followed along to the simple beat he pounded out with his hands. Nord said his company takes part in after school programs and other children’s groups in town.

“I’m just trying to spread a love for rhythm and joy,” Nord said.

Later in the day, Tangled Tones, with some help from local musicians the Drum Brothers, hosted a community drum circle.

Becky Douglas brought several wooden children’s games with her to Sunday Streets. Douglas and her husband Gary are the owners of Heritage Timber, a company that tears down old buildings and reuses the wood and other components from them. The couple are also founding board members of Home Resource.

“We’re psyched to keep this material out of the landfill and the dump,” Douglas said.

On Sunday, Heritage Timber’s booth had everything from large-scale wooden games of dominoes and Jenga to a long, inclined plank with intertwining rivulets cut into it to form a marble runway. Douglas said most of Heritage Timber’s business involves other people buying their salvaged wood for their own projects, from a small piece of ornamentation to putting in a new-to-them floor.

At the booth for the Bike Walk Alliance for Missoula, president Jean Belangie-Nye spread the word about building bikes paths in the surrounding region. Her booth included large maps of all of the current and planned pedestrian paths in western Montana, and highlighted where gaps in those paths exist. Right now, Belangie-Nye said the most pressing gaps involve paths between Missoula and the Bonner/Milltown areas, as well as access to safe walking and cycling in and around Frenchtown and Evaro.

"These are some of the places where we have seen fatalities recently," she said.

The Bike Walk Alliance has worked on many path projects, including writing the grant that is funding the new Lolo to Missoula pathway currently under construction.

“I advocated for that path for 27 years,” Belangie-Nye said.

While the French Alps they aren't, the streets of Missoula provided a pretty good place for a bike tour Saturday night.

Alexandra Stoke just moved to the Northside neighborhood a few months ago, and had never before experienced an event in Missoula like Saturday…

Higgins Avenue will be closed to traffic and open to bikes, walkers and activities as Sunday Streets returns.

Samantha Rivers joins several dozen others in 2015 for Yoga on the Bridge as part of Sunday Streets. The annual event is coming to the Franklin to the Fort neighborhood on Aug. 8 from noon to 3 p.m. and will activate one mile of neighborhood streets starting and ending in Franklin Park.

Dancers do-si-do to the direction of a square dance caller.

Thousands showed up for the afternoon designed to promote active forms of transportation.