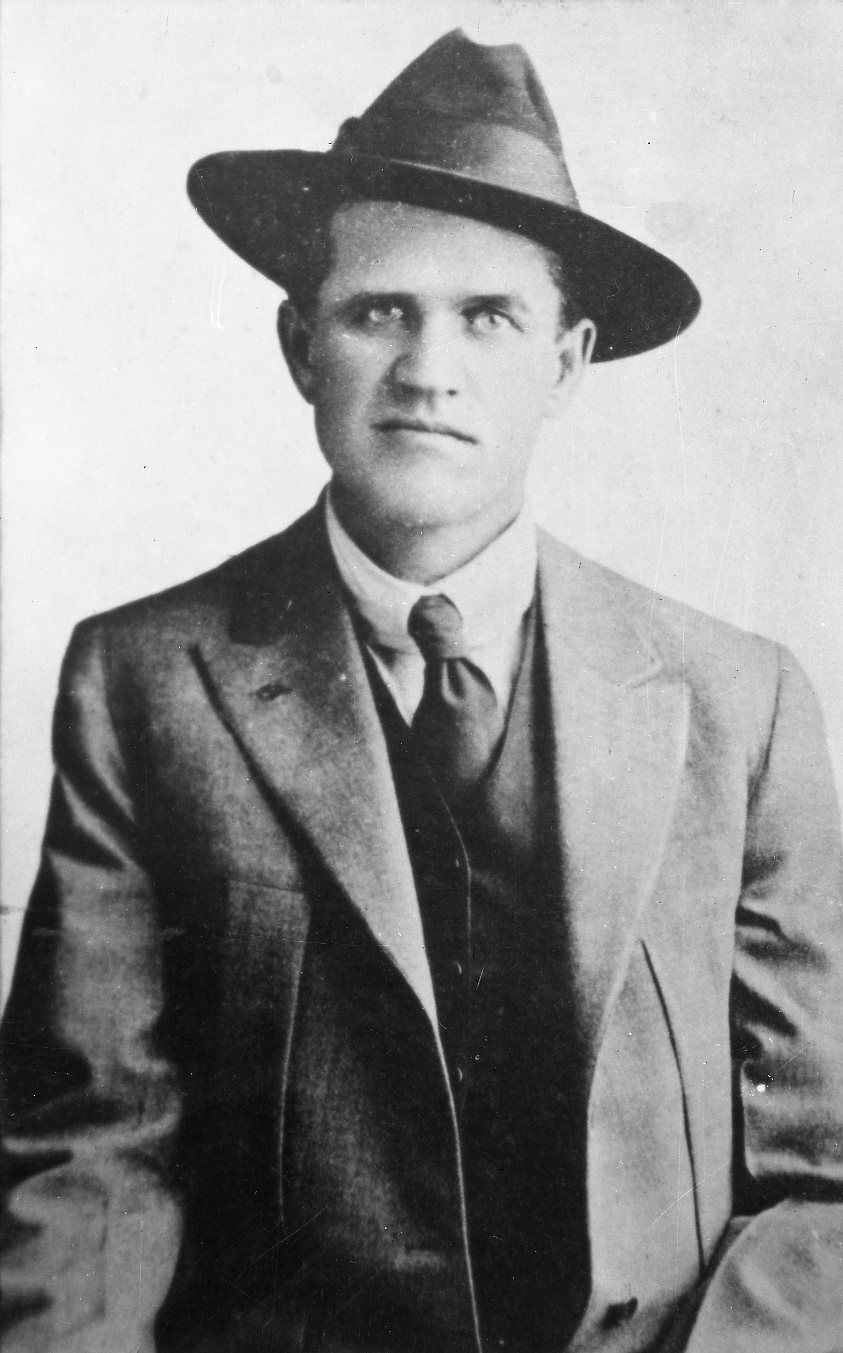 A new podcast, "Death in the West: The Murder of Frank Little," examines the killing of the union organizer in Butte during the unrest of 1917. 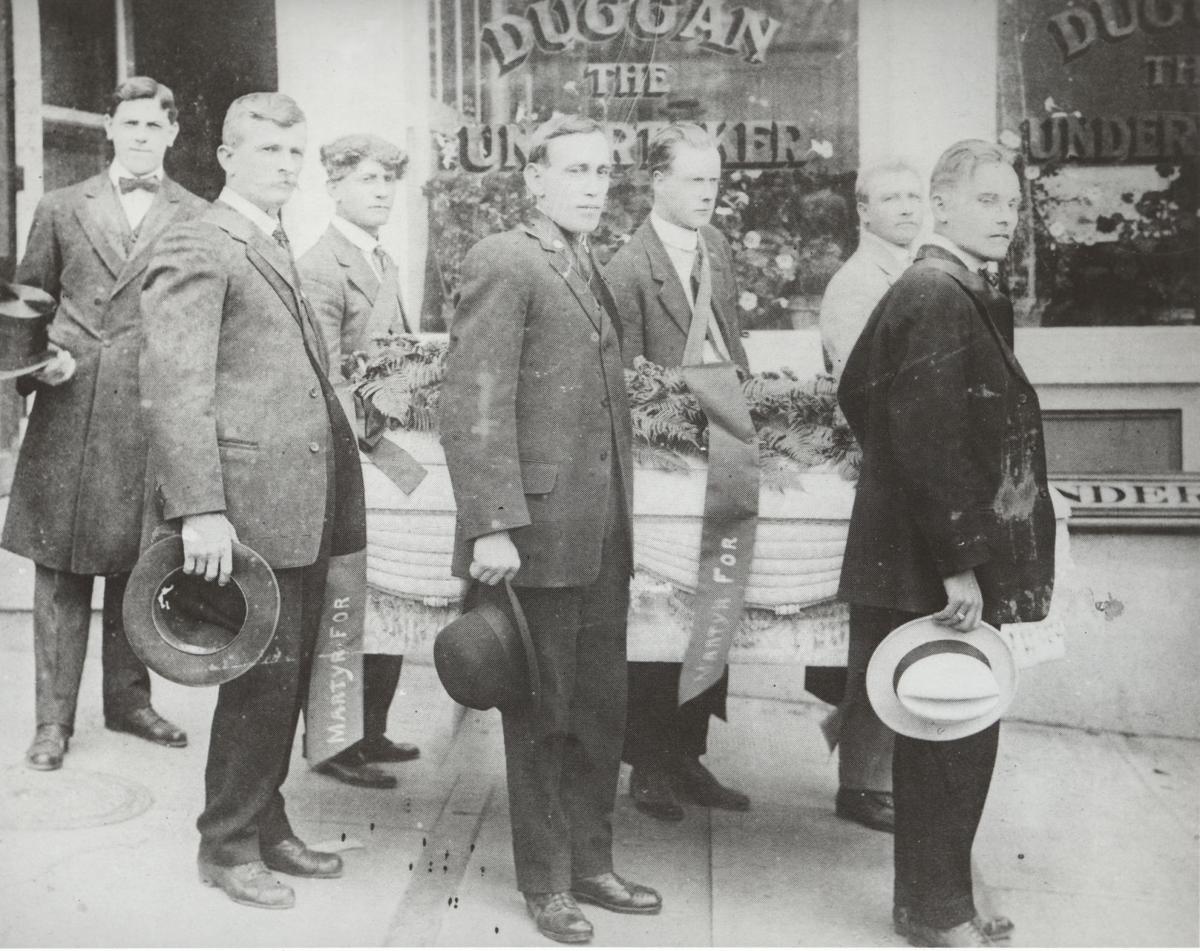 Men carry Little's casket after his murder. The procession drew thousands of people into the streets of Butte. 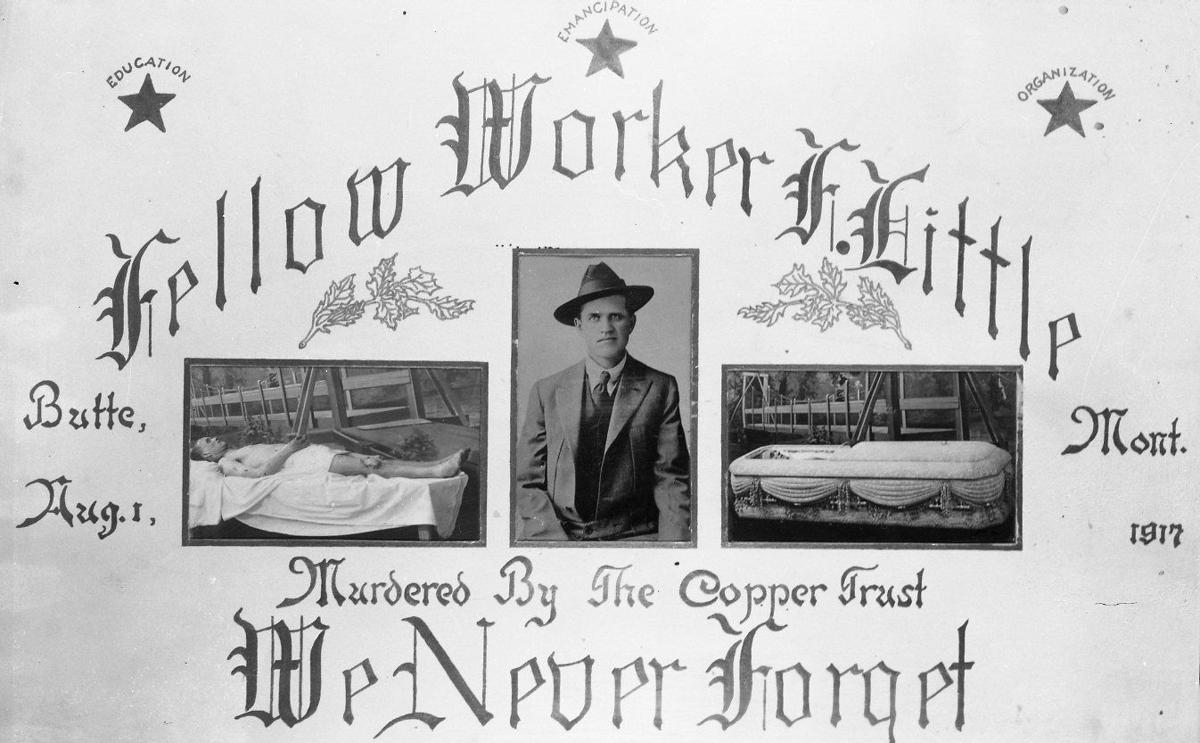 A poster memorializing Little after his murder. A hundred years later, speculation still flies about who killed him.

The unsolved murder of union organizer Frank Little in 1917 Butte receives the long-form podcast treatment in the first season of “Death in the West,” a new production from four Missoula natives with deep storytelling roots.

The show aims to “straddle the line between true crime and history,” said co-producer Chad Dundas. While it will satisfy crime fans with crime-scene specificity, it’s something of a “trick” as the show “spiderwebs out” with themes about class, wealth and more that resonate today.

While Montanans probably learned about Little in school, the podcast’s “wide-angle” approach contributes more layers of context and intrigue.

”People are familiar with the story, but don’t have a deep understanding of what might have happened and the various forces that might have brought it about,” he said.

The full creative team comprises two sets of siblings who’ve known each other since childhood: Dundas, a novelist and journalist, his brother Zach Dundas, also an author and journalist; Erika Fredrickson, the arts editor for the former Missoula Independent, and her brother, Leif Fredrickson, a faculty member in history at the University of Montana.

Chad, who has a long-running mixed-martial arts podcast, “The Co-Main Event,” with fellow Missoula-based journalist Ben Fowlkes, wanted to experiment with a “Serial”-style program, and he and his collaborators started with a story that had interested them since they were young.

“One of the ways that the Frank Little case hasn’t been presented to the public is in an … ongoing, serialized way,” Dundas said. With a broad focus and sound design, music and production, it “brings that historical crime to life.”

Three episodes are online now and the season could stretch toward eight weekly releases, with potential bonus episodes.

As with many a whodunit, the series starts with Little’s grisly death. A traveling organizer for the Industrial Workers of the World, he came to rally miners in Butte in 1917 during their strike with the Anaconda Company, an empire that “effectively controlled the state.”

Butte, then the largest city in Montana and provider of the nation’s copper — powering the country — was “the toughest city in the toughest state,” Zach explains in one episode, and the inspiration for Dashiell Hammett’s influential thriller, “Red Harvest.” Against the backdrop ethnic rivalries and nationalism over America’s entry into World War I, tensions were high.

Little was allegedly swept up by a black car with six men. He was found hanged from a trestle. Who was it? The Anaconda Company? Authorities in cahoots with the company? Why wasn’t the case ever solved?

Before the pandemic, the team traveled to Butte to visit important sites for interviews, such as the place where Little was hanged and his gravesite, that add a scenic element of discovery. They interviewed historians like Dick Gibson and combed through archival research. Another key source is Jane Little Botkin, one of Little’s descendants who wrote a definitive book, “Frank Little and the IWW: The Blood That Stained an American Family.”

All four co-producers are heard, with Zach as the main narrator. Travis Yost wrote original music, and they weave in songs by Montana bands — Dublin Gulch of Butte, and Birds Mile Home, the Best Westerns, Butter, and Caroline Keys of Missoula, with more to come in future episodes.

The show balances literary nonfiction flair and historical research without skimping on the salacious details true crime fans expect. Dundas said writing for scripted podcast is closer to screenwriting than crime fiction (see his literary crime-themed page-turner, “The Blaze”). The narration in audio format needs to be more carefully paced — circling back, sometimes repeating key details with the knowledge that listeners might be multi-tasking. The four are already planning a second season that will be thematically similar but different, he said.

One of the more fascinating elements, Dundas said, are the parallels with contemporary America — a working class that was dissatisfied with the disparity of wealth and a rising tide of socialism set against increasing nationalism brought on by the entry into WWI. The rift between Little’s union, the International Workers of the World, which wanted to dismantle the state, and the Western Federation of Miners, which favored more conservative improvements for workers, seem “ripped out” of arguments between supporters of Joe Biden and Bernie Sanders a century later, he said.

Without giving anything away, he said Montana history fans will likely find some information that’s new to them, while cautioning that it would be “a tall order” to solve a 103-year-old murder.

You’ll have to listen to find out.

“Death in the West: The Murder of Frank Little” is available on iTunes, Spotify and other podcast services. New episodes come out on Tuesdays. For more information and bonus material, head to deathinthwestpod.com.

Things to Do: Go online for symphony, Indigenous Film Fest, and rock bands

As the weather gets colder, more Missoula creators are bringing their work to streaming formats or holding socially distanced events. Here's s…

A range of ideas were presented, from merging police departments and parking enforcement, to using city services for road and sidewalk maintenance on campus, to converting UM parking lots to housing.

A Bigfork man has been sentenced to 15 years in prison and five years of supervised release after he was convicted of methamphetamine trafficking in northern Montana, authorities said.

UM dance moves outside and on screen

Within challenges and limitations, Brooklyn Draper says, creativity can blossom.

A new podcast, "Death in the West: The Murder of Frank Little," examines the killing of the union organizer in Butte during the unrest of 1917.

Men carry Little's casket after his murder. The procession drew thousands of people into the streets of Butte.

A poster memorializing Little after his murder. A hundred years later, speculation still flies about who killed him.