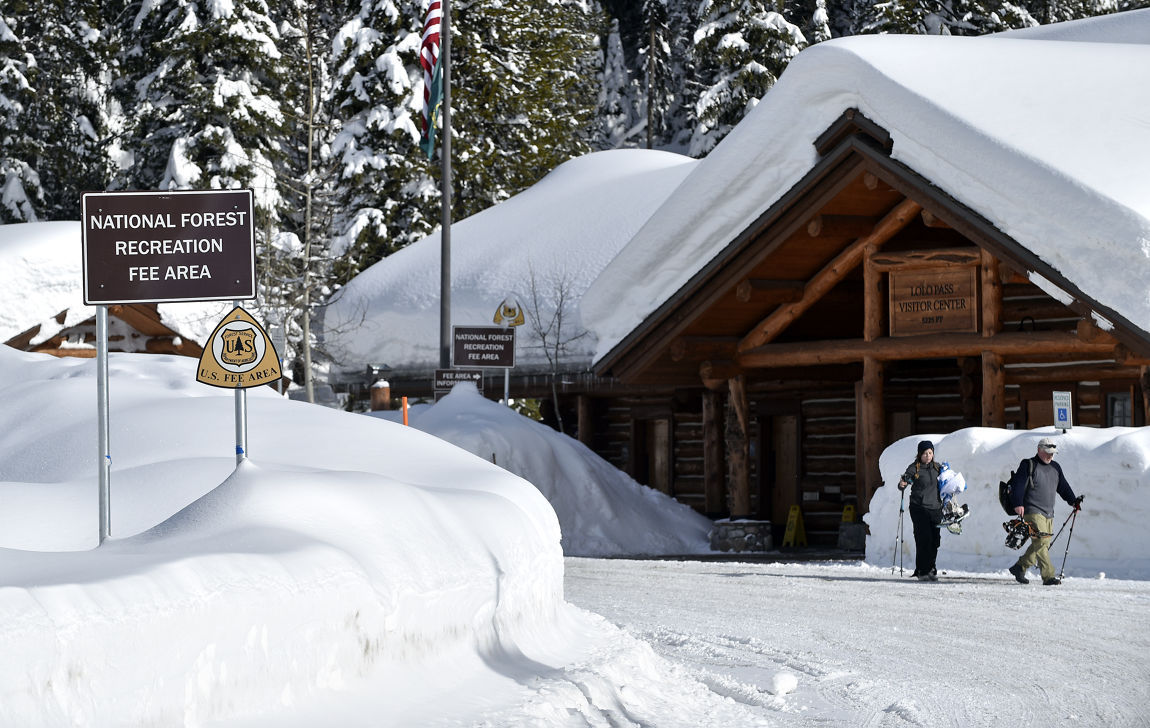 The recreation area at Lolo Pass attracts thousands of skiers, snowmobilers and snowshoe enthusiasts in the winter, and is run through a partnership between the U.S. Forest Service and local non-governmental organizations. That strategy has worked well for the Forest Service, which in its own recent analysis is generally lacking the funding and workforce resources to adequately manage public lands for recreation, heritage and wilderness. 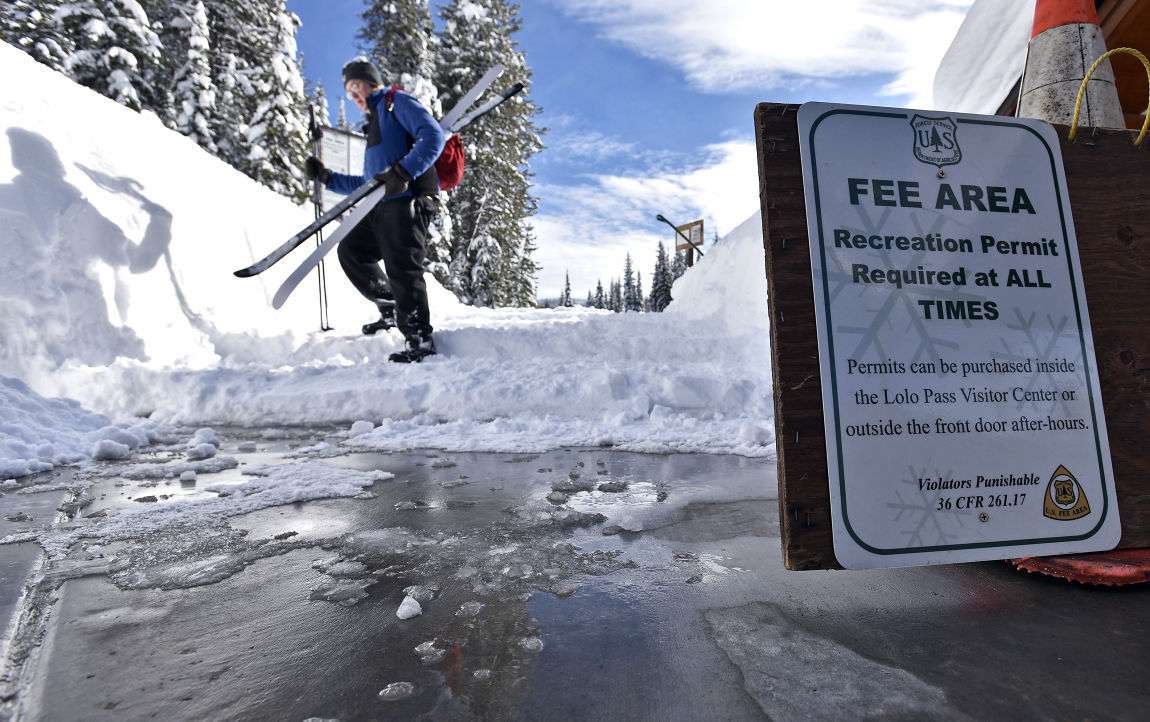 A fee system has been in place at Lolo Pass for years, which helps with funding but still requires people to administer. At other national forests around the country, fees have been controversial. 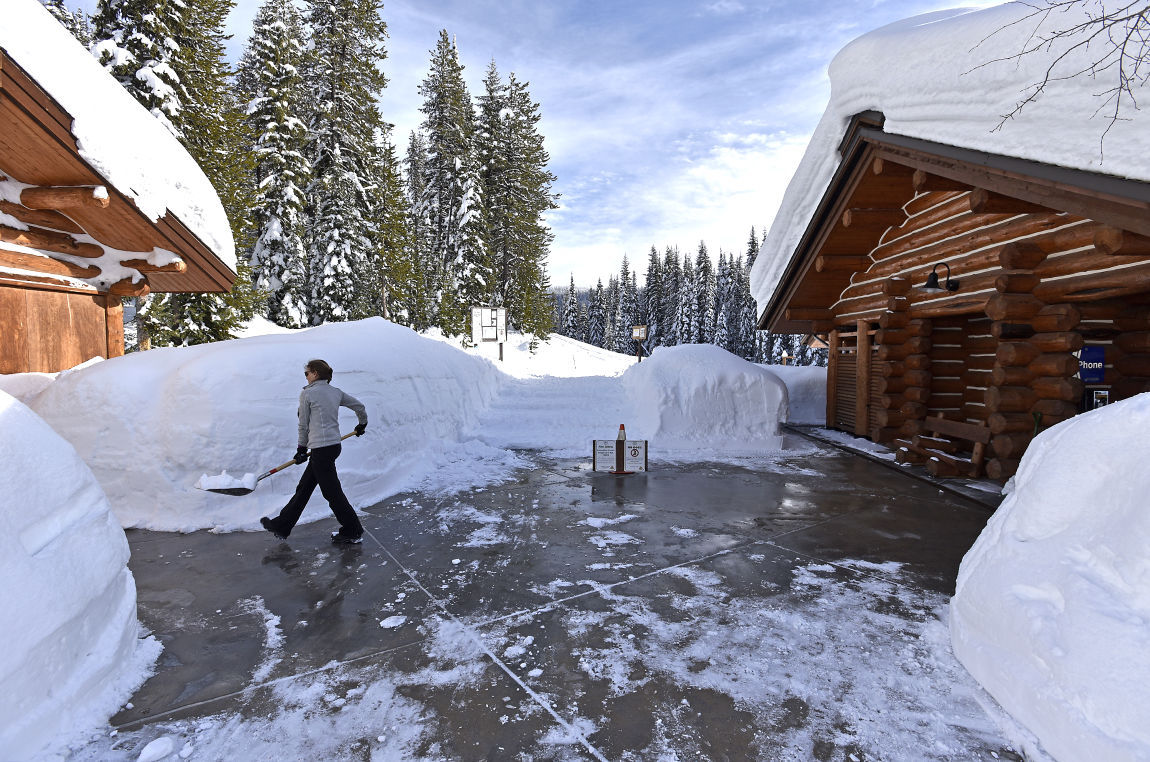 Colleen Mathisen shovels snow at the Lolo Pass visitor center last week. Mathisen is with Discover Your Northwest, a nonprofit organization that partners with the U.S. Forest Service to run the visitor center.

The recreation area at Lolo Pass attracts thousands of skiers, snowmobilers and snowshoe enthusiasts in the winter, and is run through a partnership between the U.S. Forest Service and local non-governmental organizations. That strategy has worked well for the Forest Service, which in its own recent analysis is generally lacking the funding and workforce resources to adequately manage public lands for recreation, heritage and wilderness.

A fee system has been in place at Lolo Pass for years, which helps with funding but still requires people to administer. At other national forests around the country, fees have been controversial.

Colleen Mathisen shovels snow at the Lolo Pass visitor center last week. Mathisen is with Discover Your Northwest, a nonprofit organization that partners with the U.S. Forest Service to run the visitor center.

A new strategy for managing public lands for recreation, heritage and wilderness paints a bleak picture of the U.S. Forest Service’s own ability to tackle the job.

“You could say this looks like a D-minus report card,” said George Bain, Forest Service Region 1 director of recreation, lands, minerals, heritage and wilderness. “To us, this is how it is. We wanted to take a good, hard look and develop a strategy for how to work in that world. We don’t have all the money we’d want. We don’t have all the workforce we’d want. We don’t have the ability to take care of everything the way we’d like. This is the landscape we’re working in. Let’s see how to address this.”

The 50-page document released last August got little notice outside the Region 1 Missoula headquarters. But it had been more than a year in the drafting, and it has been signed by Regional Forester Leanne Marten, her deputies and the supervisors of all 10 national forests that report to her.

In its introduction, the strategy states its intent “is not to identify additional work, but instead, to focus our limited workforce and budget on actions that: address common issues and needs; create long-term efficiencies for the field; and ensure sustainable program delivery to the public.”

During the drafting process a year ago, Bain said the goal was to raise recognition of the Forest Service’s recreation responsibilities in an agency many still associate with timber management.

And those responsibilities are daunting, according to the strategy’s “Current state of affairs” section. It notes more than $25 million in deferred maintenance with no funding available for the next several years. Region 1 has more than 10,000 dispersed recreation sites, half of which show damage, with “no national or regional program direction/guidance." The region administers 1,820 recreation special use permits of increasing complexity while “our workforce capacity, skills and funding continue to decrease.”

“Workforce skills are also on the decline” in maintaining Region 1’s 28,000 miles of trail. Most of the five Wild and Scenic River corridors lack completed management plans.

In late January, Bain delivered further bad news to a roundtable of recreation partners – Region 1’s trail maintenance budget is taking a 30 percent cut. That’s going to be phased in with 10 percent increments during the next three years. The money was getting reallocated to places like California that have more user-days of trail use.

Backcountry Horsemen agency liaison Dan Harper was at the trails meeting and came away concerned with how much Forest Service weight was being placed on partnership shoulders.

“The volunteers are close to being maxed out on what they can volunteer,” said Harper, who regularly leads mule pack trains into the Bob Marshall Wilderness to resupply trail crews made of donated labor. “The Forest Service is rapidly losing anyone who knows how to run a crosscut saw or load a pack animal – the kinds of things necessary to maintain wilderness trails. And if they’re not maintained for a few years, they’re no longer usable.”

Peter Aengst of the Wilderness Society’s Bozeman office said while partnerships are a necessary part of the future, the problem was bigger than that.

“On one hand I feel for the Forest Service,” Aengst said. “They are in a really tough spot here. But that doesn’t give them a get-out-of-jail-free card. I can say thank you for being honest, (for) accurately describing the current situation and what that means and the challenges you’re under. What’s your answer?”

The answer could look a lot like Lolo Pass this winter. Sitting on the border of two states and two national forests, Lolo Pass in winter attracts thousands of snowmobilers, cross-country skiers and powder hounds to its deep snowfields.

But while the Forest Service is responsible for virtually everything going on there, non-governmental organizations do almost everything that needs doing. The trails get groomed by a partnership between local snowmobile and Nordic ski clubs, using grant money provided by the Montana Department of Fish, Wildlife and Parks. While the Forest Service built the visitor center, four-fifths of the $5 million cost came from the Montana and Idaho departments of transportation.

“Lolo has such unlimited potential to be a regional ski area,” said Craig Krueger, president of the Missoula Nordic Ski Club, which helps groom the trails. “As time goes by, recreation is going to become more of a challenge. At this point, it’s working for us. They (the Forest Service) have said if you want to groom, you have to find the money and labor. The grants we have are becoming more and more difficult to get.”

Krueger said he understood the pressure to move to a fee system. But that also involves hiring someone to run the cash register, and someone to enforce permit use. At what point does that make it beyond the means of people who look to Forest Service lands as the affordable outdoor recreation source?

The Forest Service strategy puts up four targets: publicity, funding, workforce and partnerships. Bain said the first step was better marketing of what the Forest Service had to offer – both to visitors coming to national forests and the communities that benefit from that traffic.

“We need to make it easier for if you want to come to Montana and rent a lookout – where’s where you go?” Bain said. “You shouldn’t have to stumble on it.”

The funding step involves both setting priorities for necessary work and finding sources of money. That probably includes new fees for many sites and services. Past attempts at Forest Service use fees have ranged from small pilot projects like day-use permits at Holland Lake to more comprehensive menus at some national forests in California and Arizona. Almost everywhere, they’ve been controversial.

“Fees are one of the things that can help us help ourselves,” Bain said. “We know we crossed the line in a few places. That’s a big part of the communication plan. We need to make sure it’s ready. Everything is not as cookie-cutter like it is at the National Park Service.”

The workforce issue has seen some recent remarkable changes. In the past year, the Forest Service has offered new career-leadership tracks admitting workers with college degrees outside the traditional biological science field. That’s opened opportunities for those with backgrounds in recreation management, historical analysis and other interdisciplinary studies to reach management positions.

Bain said the Forest Service’s multi-use mission has always included recreation, heritage and wilderness. The strategy intends to refocus attention on those components before their deferred needs become unfixable.

“I think there is more awareness and focus on these programs than there was in the past,” Bain said. “We want to communicate that – share that with the public at large. We want to explain what these resources mean to community stability and local economy.

“After World War II, we were all about timber. We were the government side of timber production. Now we have a clearer recognition of ecosystem functions, wildfire, climate change and the need to do restoration work. There’s a nexus between healthy forests and where people want to go recreate. It’s not all rosy. But it’s not all broken either.”

• Region 1’s 1,658 developed recreation sites have an annual operations and management cost of $10 million a year. In addition, there is $25 million in deferred maintenance, with no funding available to address it over the next several years.

• Dispersed recreation includes more than 10,000 inventoried sites. Half of them exhibit resource damage. “There is no national or regional program direction/guidance.”

• Scenery is considered “the most important aspect of visitor experience in the Northern Region … Funding and workloads are focused on mitigation rather than enhancement or proactive management.”

• Trails cover 28,000 miles of Region 1 forests. Demands and deferred maintenance continue to incrase while budgets decrease. Workforce skills are also on the decline.”

• Wild and Scenic River designations apply to five rivers in Region 1. “Most do not have management plans completed.”

While it was technically the second annual Winter Carnival, this year’s event had a bit more of a key ingredient for wintertime fun.

Seven months into her job as leader of the U.S. Forest Service’s Northern Region, Forester Leanne Marten wants to see more even progress at a …

Sometimes it takes a technological leap forward to go back in time.

BILLINGS – The federal government is once again considering cutting hours at Montana’s 24-hour port-of-entry with Saskatchewan.

BILLINGS – For the second time this week, a Gallatin County rescue team was called to rescue a man who had wrecked a snowmobile in the Two Top…

We used to think wildland firefighters hibernated like bears after chasing smoke all summer.

Quarter-century of restoration paying off in Blackfoot

If a tree issue blows up in the forest, does anyone hear it?