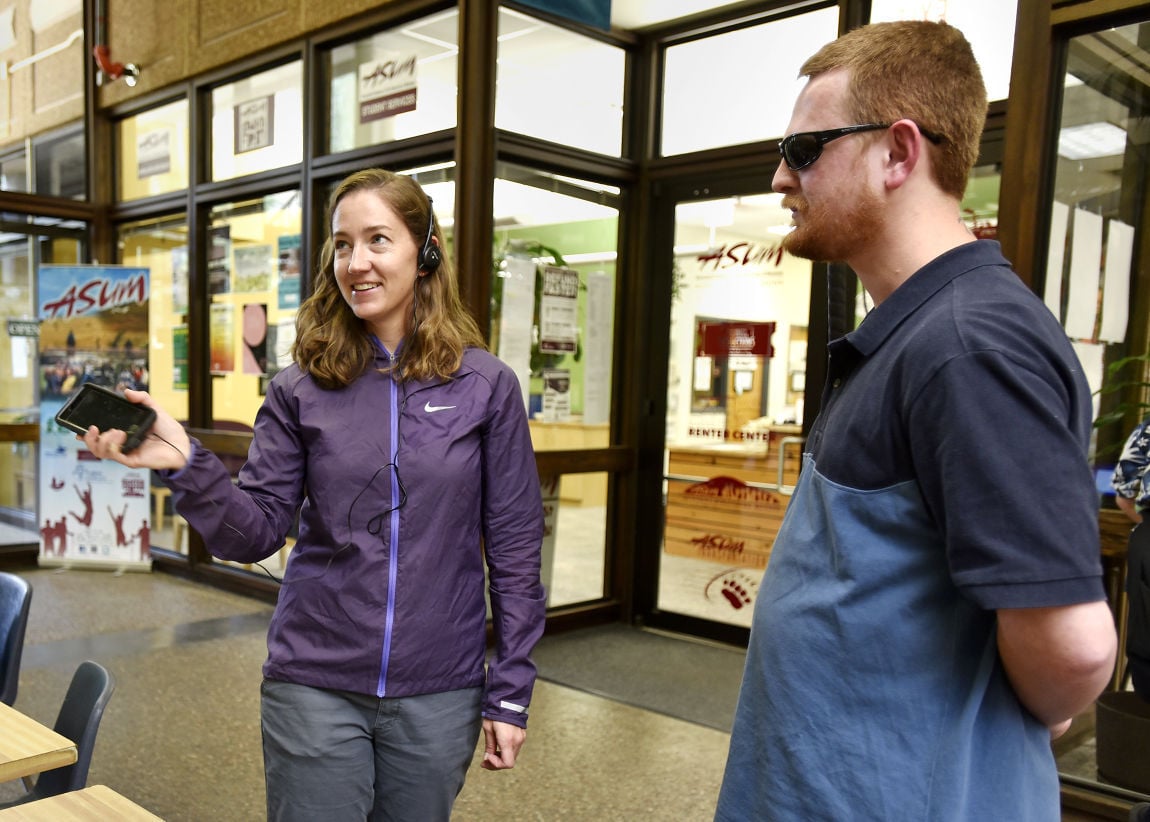 Kelsi Camp, a University of Montana employee, tries a game of audio ping pong with help from UM business student Aaron Page at the University Center on Monday. A demonstration of games with assistive technologies was part of an event to celebrate the 25th anniversary of the Americans with Disabilities Act. 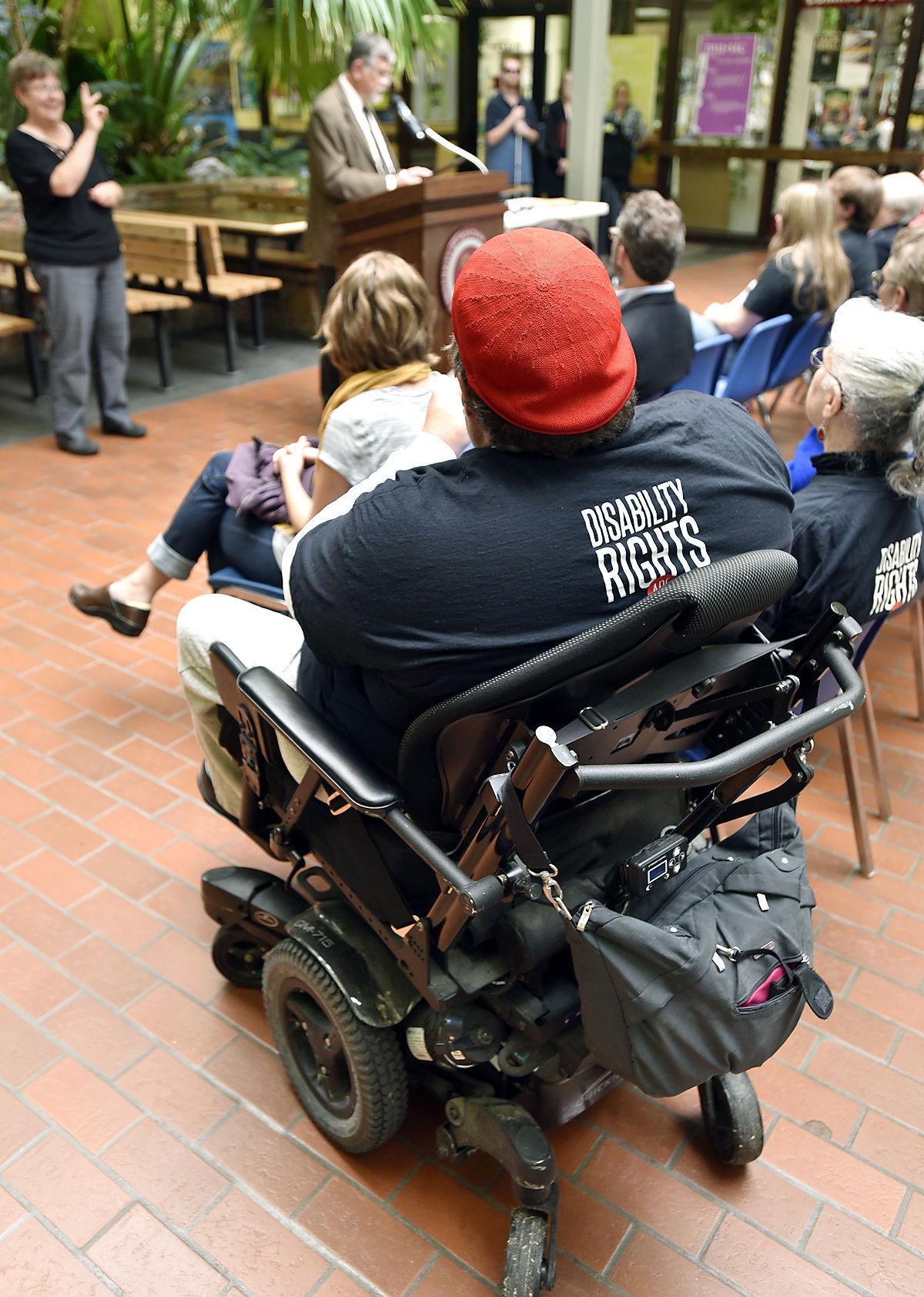 President Royce Engstrom read a proclamation that recommits UM to implementing the ADA in full.

Lex Pitra put on headphones for a short time to kill zombies at the University Center.

Pitra, an advising intern studying religion and Chinese at the University of Montana, couldn't see the enemy, but she could hear it.

She hadn't thought about how not being able to see would affect playing video games, either, and she kept looking at her screen expecting a visual display.

The zombies only made noise, but Pitra liked the demonstration.

"This seems like a really cool idea," she said.

On Monday, the University of Montana celebrated the 25th anniversary of the Americans with Disabilities Act. At least 50 students, staff and other members of the campus community participated in the event one day after the ADA's official July 26 birthday.

At a brief presentation, UM President Royce Engstrom read a proclamation, and the head of the Alliance for Disability and Students of the University of Montana shared a retrospective on advocacy on campus.

Aaron Page, who will graduate in December with a degree in business, ran the booth with games.

Page, who uses a white cane, said UM has made great strides in becoming more accessible, even in the five years he has been a student.

In the past, for instance, Page would go to class, get course materials from the teacher, turn them into Disability Services for conversion, and receive a modified version later.

The process took time, and he wouldn't get material at the same time other students did, he said. Most of the time now, there is no delay.

In fact, he recently took a class where he had access to everything online, and he was able to take exams at the same time, and in the same room, as the rest of the students.

"They're never going to be 100 percent, but compared to the way things were when I started, it's really come a long way," Page said.

One of the visitors to Page's booth was Engstrom.

Engstrom tried out a game of ping pong, where the player hears the ball and uses an iPhone as a paddle to hit it at the right time.

Page told the president the tunes on the headphones would indicate whether he was playing well or poorly.

"This is pretty good music. I must have done something right," Engstrom said.

In his remarks, the president said UM enrolls roughly 1,200 students with disabilities each year, a high percentage for a campus.

"It's becoming the school of choice for people with disabilities," Engstrom said.

In college, he said, students have life-changing experiences, and as they pursue higher education, they discover who they are.

"It would be just unconscionable to deprive anybody of that experience," he said.

UM is using more and more technology in education, and all of it needs to be accessible, Engstrom said. On campus, many people in Information Technology, Disability Services and other areas have worked to ensure the technology the school uses is accessible.

"It's just remarkable what people have accomplished at the University of Montana," he said.

The proclamation the president read noted the ADA has expanded opportunities for Americans with disabilities, and Engstrom reaffirmed UM's commitment to complying fully with the spirit and the letter of the law.

"We look forward to the next 25 years of accessibility," Engstrom said.

In her talk, she said much work remains on campus. UM has started creating accessible educational environments, she said, but students still face hurdles from their own peers.

She cited as an example the failure in 2014 of a resolution supporting electronic accessibility of ASUM Services. She said cost framed the discussion, and she challenged the audience to see accessibility in a different light.

In the past, she said, students have advanced the cause through litigation, and the campus improved for people who have disabilities.

She also said there's more to be done.

The tomatoes are plump and sweet at the booths that might be the tiniest farmers market in Missoula.

Under the M: UM Dining director toasted by national group

The promise of 'community' for everyone

“Are we there yet?” When it comes to employment and full inclusion of people with disabilities into our communities, the answer is, “probably …

UM scientist studies earthquakes from Montana to the Himalayas

Soon after the earthquake struck Nepal this spring, Rebecca Bendick got an alert from nearly every device she owned.

High enrollment around the turn of the decade was an anomaly, not a new standard, University of Montana President Royce Engstrom said in his S…

Here are two things that happened when a small Missoula company took home not just one but two grand XPRIZEs in an international competition.

PABLO – Le Khuong peered at the elaborately designed clothing displayed behind glass at the People's Center, and he wondered.

The first person standing in line for tickets to the Grizzlies opening game wore yellow and green. Guess where Micah Zimmerman is from? Yep. Zimmerman and Troy Kind, second in line, flew in Sunday from Fargo to get tickets to root on the North Dakota State Bison at the University of Montana. They landed just before midnight and headed straight to the parking lot in front of the Adams Center.

UM lands on two 'top 10' lists so far this summer

The University of Montana has landed on two "top 10" lists this summer – so far.

POTOMAC – It's haying season here, but Denny Iverson took some time out of his day Tuesday to tell conservationists from around the world abou…

Kelsi Camp, a University of Montana employee, tries a game of audio ping pong with help from UM business student Aaron Page at the University Center on Monday. A demonstration of games with assistive technologies was part of an event to celebrate the 25th anniversary of the Americans with Disabilities Act.

President Royce Engstrom read a proclamation that recommits UM to implementing the ADA in full.