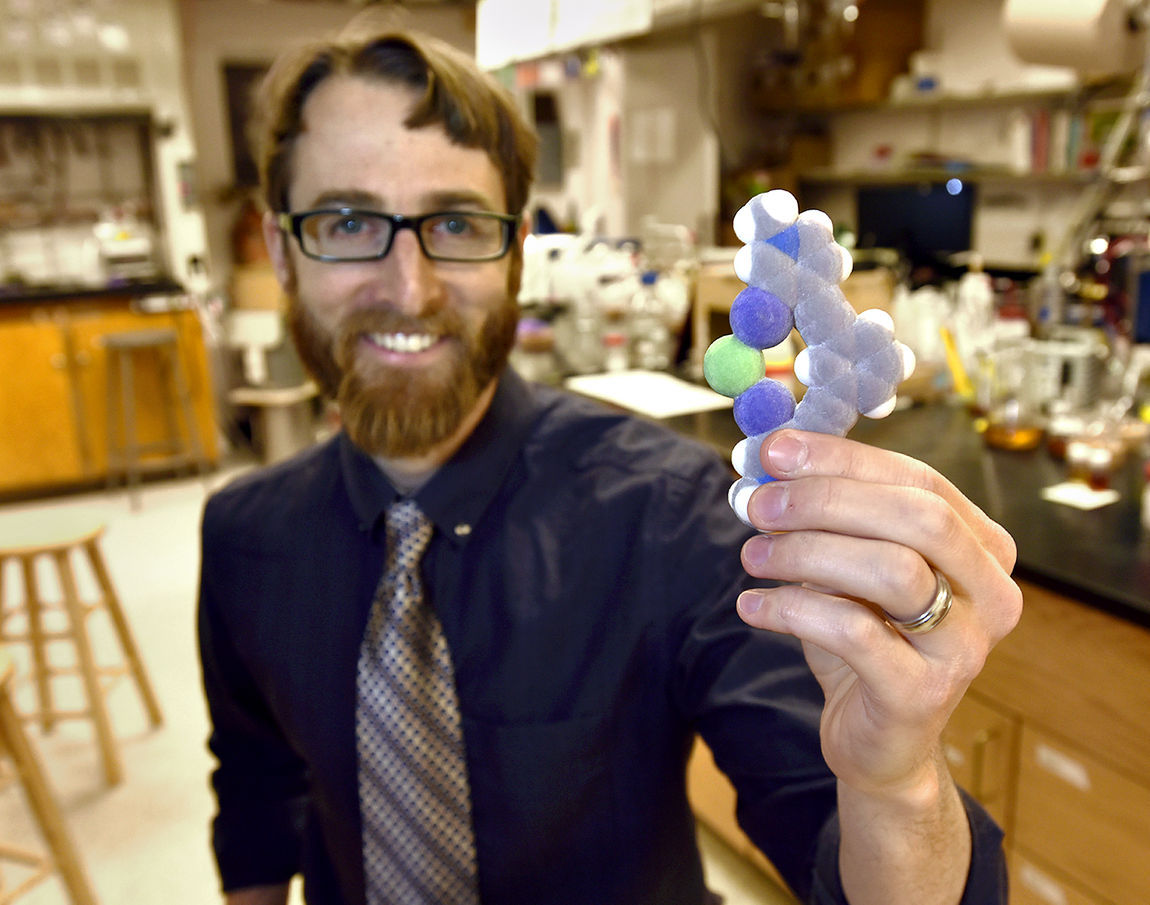 Orion Berryman, assistant professor of chemistry at the University of Montana, holds a 3-D model of the crystal structure of a molecule in a laboratory at UM on Monday. Berryman was awarded a $675,000 grant from the National Science Foundation to support research into the structure of molecules and how their properties can be adjusted. 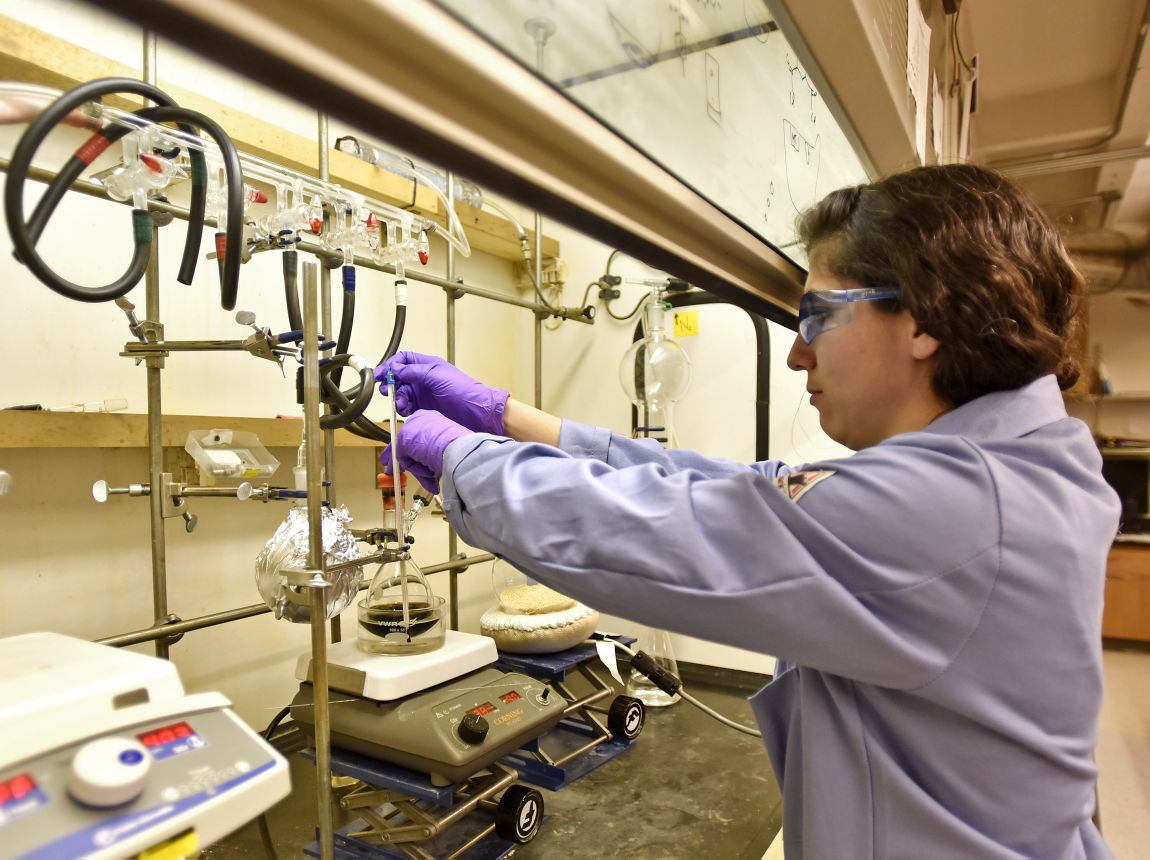 Asia Riel, a third-year graduate student in organic chemistry at UM, helped Berryman land the grant through her preliminary research.

The University of Montana faculty members just won the 2016 Oscars for researchers.

This year, the National Science Foundation awarded McCutcheon and Berryman each a prestigious CAREER Grant, bringing more than $1.4 million to the campus in all. The grants are slated to be paid over the course of five years.

See the chart below for some previous National Science Foundation CAREER Award recipients at UM. (Not all researchers are with UM anymore.)

The federal agency with a mission to promote science gives out 300 to 400 such awards each year to junior faculty integrating research and education, UM said. On its website, the foundation said its awards account for "about 20 percent of federal support to academic institutions for basic research."

"The fact the University of Montana received two awards is rare and a testament to the quality of the researchers being recruited to campus," Scott Whittenburg, vice president for research and creative scholarship, said in a statement from UM.

Berryman, assistant professor of chemistry, said UM has the only diffractometer in the Rocky Mountain Northwest. It's a $515,000 piece of equipment installed in February 2014 and was purchased with an earlier NSF grant.

UM has used it to help its own labs as well as to assist other institutions, such as the University of Idaho, Carroll College and Montana State University, in getting preliminary results for grants and applications.

Berryman’s lab uses the machine to create an exact map of what a molecule looks like, such as catalysts for sulfur compounds. Once researchers have a solid picture of the structure of a molecule, they can adjust its properties to see how it reacts.

The goal of his current grant? To make catalysts, or speed up reactions.

"If we can find new ways to catalyze reactions, it could have potential impacts in a whole host of different areas," said Berryman, at UM since 2012.

In the future, for instance, a scientist may be able to create a more effective prescription drug using the road map provided by Berryman and the diffractometer.

"So the new process that we are developing will allow you to make new things, as well as save time and money," Berryman said.

The National Science Foundation awarded Berryman $675,000 for expenses related to his research and to be paid over the next five years.

In his other work, Berryman uses 3-D printing as a way to inspire students into STEM, or science, technology, engineering and math education. He'd like people to contact him if they have a use for 3-D printing that might complement the work at UM.

Reach Berryman by email at orion.berryman@umontana.edu.

McCutcheon, in the Division of Biological Sciences, studies bacteria that live inside cicadas, and his work earned a grant of $746,301 from the foundation.

In his field, researchers do a lot of work looking at the way bacteria in the gut affect human health, he said. But bacteria are plentiful in the human system, and McCutcheon had a different focus in mind.

"I wanted to work on a simple system," he said.

In Tucson, Arizona, he did some research on a local species of cicada on a whim, and he figured it'd be a one-time experiment.

"It turned out to be super interesting, and not in the way that I expected," McCutcheon said. "These bacteria are really weird. They just have really small genomes that don't have very many genes on them."

In fact, the bacteria that live inside that noisy bug are surprisingly similar to parts of plant and animal cells, he said. And the processes underway in the cicada offer insights into human cell biology.

"So what I've done since working at UM is look for those similarities," McCutcheon said. "You see a lot more than you would have expected."

According to a news release from UM, the work involves extensive computing, and the assistant professor will teach programming to students as part of the grant.

"A major goal of the project is to increase the competitiveness of UM students by giving them the computational tools they need to handle diverse, complex and large sets of data," UM stated in the news release.

UM first nabbed two CAREER awards in the same year in 2008, and in 2009, it earned three of the grants, according to a news release. (See chart for more details on past awards.)

Under the M: UM Dining ranks No. 1 in state in campus food survey

Last year was full of challenges and disappointments for wood products markets.

The Holy Grail, the “aha” moment – call it what you want, Kris Crawford experienced it last week.

Orion Berryman, assistant professor of chemistry at the University of Montana, holds a 3-D model of the crystal structure of a molecule in a laboratory at UM on Monday. Berryman was awarded a $675,000 grant from the National Science Foundation to support research into the structure of molecules and how their properties can be adjusted.

Asia Riel, a third-year graduate student in organic chemistry at UM, helped Berryman land the grant through her preliminary research.