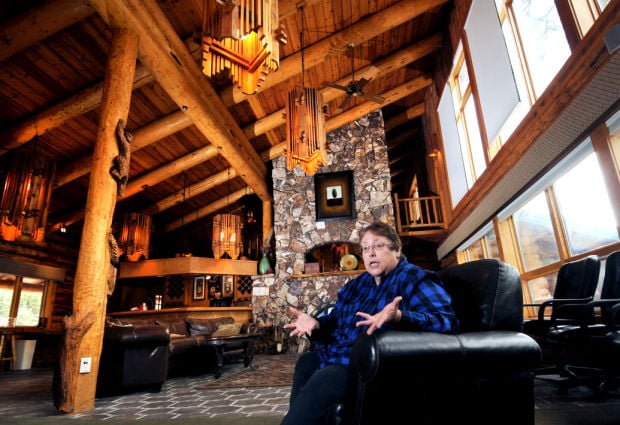 For the past 18 years, Jane Fisher has been the caretaker of the Montana Island Lodge on Sourdough Island in the middle of Salmon Lake. When she announced her intent to retire a while back, the University of Montana decided it was time to sell the property. It is on the market for $6.5 million. 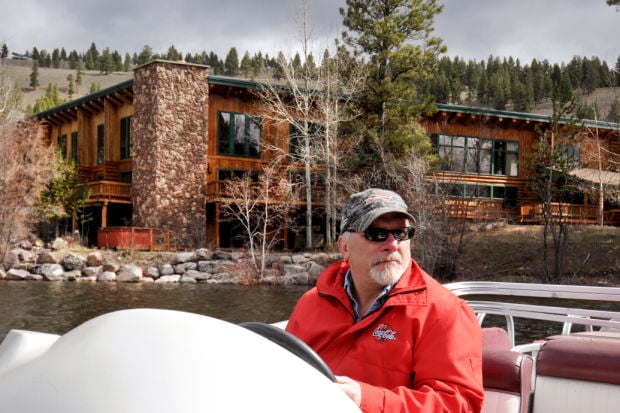 Island Lodge maintenance man Jim Teafoe takes a tour around the Island Lodge last week. Sourdough Island covers more than an acre with the 18,000-square-foot lodge as its only building. 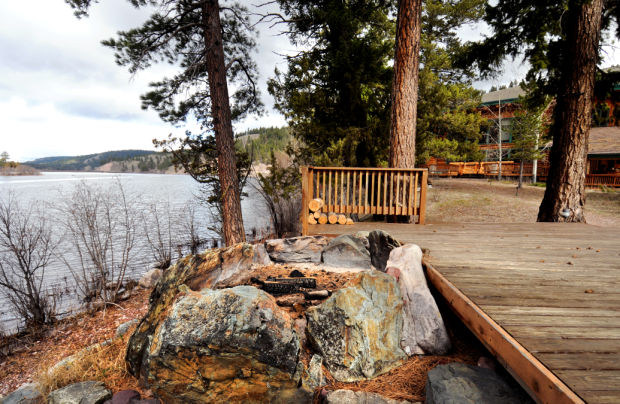 The fire pit is probably the most popular feature on the island. 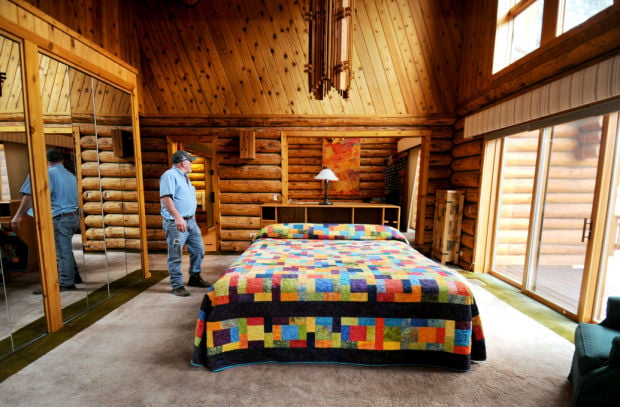 The mansion has 10 individual guest rooms, each equipped with a private bathroom. “I can comfortably accommodate 25 people, easy,” says caretaker Fisher.

SALMON LAKE – Just before 10 a.m. on a weekday morning, Jim Teafoe eased the boat from the docks and set his direction across the channel. With the ice off the lake, he guided the craft to a small island claiming a very large house, one that hasn’t been used since the closing days of fall.

On this day, work to prepare the Montana Island Lodge on Sourdough Island for the arrival of the season’s first guests is in full swing. A maintenance team added batteries to the power blinds, replaced the boards in the floating docks and gave the 18,000 square-foot building an upsized version of a spring cleaning.

“There’s so much to do,” said Jane Fisher, standing in the building’s expansive sitting room. “Our first guests are coming in on Tuesday, and we need to get everything ready for their arrival.”

The work facing Fisher and her part-time crew, including Teafoe, is monumental, though it’s nothing new. As the property’s general manager, Fisher has operated the lodge on behalf of the University of Montana for 18 years, playing host to weddings, pajama parties and Los Angeles television producers looking to surprise their wives on notable birthdays.

But last year, Fisher gave UM notice of her intent to retire, lending new significance to this year’s spring cleaning. With her departure looming, the university opted to place the property on the real estate market for an asking price of roughly $6.5 million.

It goes up for sale this week, listed by Clearwater Montana Properties in Seeley Lake and Cabela’s Trophy Properties.

“I’ve got groups booked this summer, but I’ve also got a 90-day clause in the real estate agreement,” said Fisher. “We’ll adjust our decisions as we go. All my guest groups know we’re up for sale.”

The property’s title is held by the UM Foundation, though the lodge is operated by the university. The school considered keeping the lake retreat as a guest lodge and conference center, just as it has done for the past 18 years. But Reid said doing so didn’t fit the university’s educational mission.

“It came down to asking where we needed to focus our energy,” Reid said. “If we kept it, we’d need to start looking at making long-term improvements to the facility and updating things. Given the timeliness of (Fisher’s) retirement, we thought we’d look at divesting it.”

Scientist and businessman Bruce Vorhauer resisted public opposition in 1984 when he began building the home on Sourdough Island, an arid nub of land rising above the waters of Salmon Lake.

Vorhauer was 43 at the time and had made a fortune manufacturing the popular Today contraceptive sponge. By all accounts, he was a rising star in the business world and something of a cultural icon, prompting him to launch a bid for the U.S. Senate in 1989 as a Republican candidate.

Yet Vorhauer’s upward trajectory would change directions by the end of the decade, and rapidly so. The problems first surfaced when Vince and Joan Wright filed a lawsuit against the millionaire for the wrongful death of their daughter and his fiancée, Sarah, who died in 1984 when Vorhauer lost control of his car while returning to Salmon Lake.

Facing a mountain of financial and personal hardships, Vorhauer “accidentally” burned his 85-foot yacht in Seattle in 1991. He’d bought the craft from Dennis Washington, but had fallen behind on the payments and was unable to sell it. The insurance company suspected Vorhauer of arson and refused to pay the $1.3 million claim.

Vorhauer filed for Chapter 11 bankruptcy in September 1992. He was found dead the next month near his Salmon Lake home, slumped over the wheel of a 1985 Oldsmobile Toronado with a hose running from the tailpipe to the window.

Washington would eventually purchase the island mansion for $2.2 million at a foreclosure auction. The industrialist then conveyed the property to the UM Foundation in July 1995, and the school has operated the lodge as a conference center and guest retreat ever since.

The home is nothing short of grand, even if it’s been described as ostentatious. It includes an expansive master suite and 10 individual guest rooms, each equipped with a private bathroom.

The rooms bear the names of local landmarks – Lindberg Lake, Lake Alva, Lake Inez. Most include a kitchenette and a spiral staircase rising to a loft with a sweeping view of the Bob Marshall Wilderness and its snowcapped peaks.

“I can comfortably accommodate 25 people, easy,” said Fisher, offering a tour of the home. “It’s a retreat. You’re away from everything. Our guests never want to leave once they arrive.”

The lodge serves as a getaway for those willing to pay the base price of $2,500 for one night’s use. The island covers more than an acre with old-growth trees, a private dock, a fire pit and a hot tub sitting within a stone’s throw of the lake’s rippling water.

“You have to reach out and reach a clientele that’s an end user for the property, or a corporate retreat kind of property,” said Wetherell, who also works with Clearwater Montana Properties in Seeley Lake. “It is a challenge in marketing in that it’s so unique.”

Wetherell said there are no comparable properties in western Montana, making it hard to track down comparisons. Listing it nationally through Cabela’s Trophy Properties, he said, will place it before those in the market for a $6.5 million retreat.

“There is a market for it,” said Wetherell. “It’s so unique, there’s nothing really like it. That’s the exciting part of marketing something like this.”

The size of the home – not to mention its island location – has presented maintenance challenges for Fisher and her staff, and the university’s limited budget.

During her tenure as manager, which officially began on April 1, 1997, the university has replaced the roof, the boilers and the water heater, and it has dealt with other maintenance issues as they arise.

“I’m the only full-time employee, but I have staff that’s on call,” said Fisher. “The maintenance is there, too. The university has done everything that’s been needed, but it’s not the kind of place they’d normally take care of.”

Reid agreed with Fisher’s analysis and said the Island Lodge has been a good asset for the university, one that has presented opportunities to build outreach and good will.

But in recent years, he added, the lodge has not been heavily marketed as the university’s lodge. While it stands as a valuable asset, Reid said, the property will be equally valuable once it sells.

“The property has value whether it’s sold or held onto,” Reid said. “I don’t know what it would have been worth 18 years ago, but I’m sure it has appreciated in value.”

If the property does sell, the compounded cost of maintenance over 18 years would be collected by the university. What remains will be divided between the four UM affiliated campuses, including the Mountain Campus in Missoula, UM-Western, UM-Helena and Montana Tech in Butte.

“The way the will is written, we’d net out any investment put into the property in the past 18 years,” Reid said. “The residual would be split equally among four university campuses.”

Fisher estimated maintenance expenses over 18 years at roughly $1 million. If the property sold for the asking price, $5.5 million would be distributed between the four schools.

By and large, Reid said, the lodge has been self-sustaining.

“The lodge has been intended to pay for itself,” Reid said. “Some years it’s profited, other years it’s seen deficits, but over all, it’s been breaking even, and that’s really the goal.”

When Fisher graduated from the University of Denver in 1974, she never dreamed she’d end up running a sprawling lodge built by a troubled millionaire on the island of a Montana lake.

While seeing the property go on the market is bittersweet, Fisher looks forward to her freedom. She plans to return to Reno when the university cuts her free.

“I’ve given them two years’ notice,” Fisher said. “At the end of December this year, it’s official. But I might stay a couple months into the new year if they need me. I’m not going to leave the university in a bind.”

UM's Mansfield Library to cut 8 percent from budget next year

KALISPELL – The photographs on Gennifer Sauter’s computer, of rooms so filled with Lord knows what that it’s not only stacked on furniture, bu…

Home prices and sales across Missoula increased in 2013, inching back toward pre-recession figures, though affordability took a nosedive – a l…

HAMILTON – The number of foreclosed homes being sold in the Bitterroot Valley declined for the second year in 2013.

The number of foreclosed homes being sold in the Bitterroot Valley declined for the second year in 2013.

BOZEMAN — Four offers have been made on a 103-year-old mansion the city hopes to preserve, officials in Bozeman say.

BIGFORK – Her name’s not on the deed, but this was Deanna McAtee’s home for three years.

Flathead Lake island, house on the market for $78 million

ROLLINS – In the market for a new home?

For the past 18 years, Jane Fisher has been the caretaker of the Montana Island Lodge on Sourdough Island in the middle of Salmon Lake. When she announced her intent to retire a while back, the University of Montana decided it was time to sell the property. It is on the market for $6.5 million.

Island Lodge maintenance man Jim Teafoe takes a tour around the Island Lodge last week. Sourdough Island covers more than an acre with the 18,000-square-foot lodge as its only building.

The fire pit is probably the most popular feature on the island.

The mansion has 10 individual guest rooms, each equipped with a private bathroom. “I can comfortably accommodate 25 people, easy,” says caretaker Fisher.