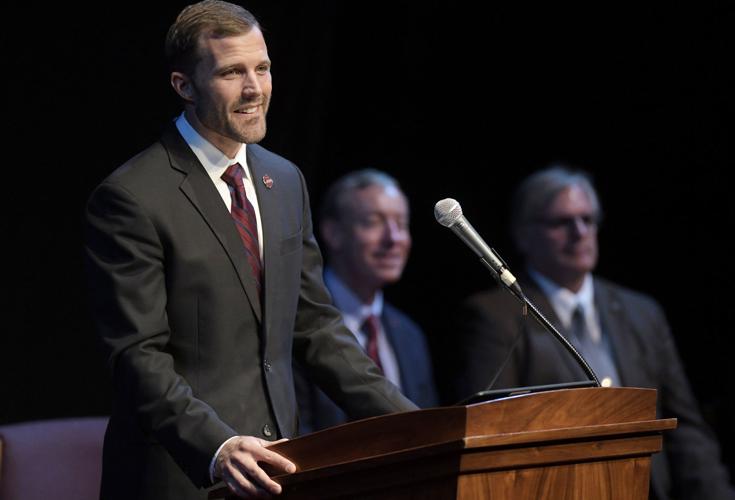 University of Montana president Seth Bodnar addresses a room full of UM faculty and staff in the PARTV building on campus during the State of the University address in this Aug. 20, 2019, file photo. 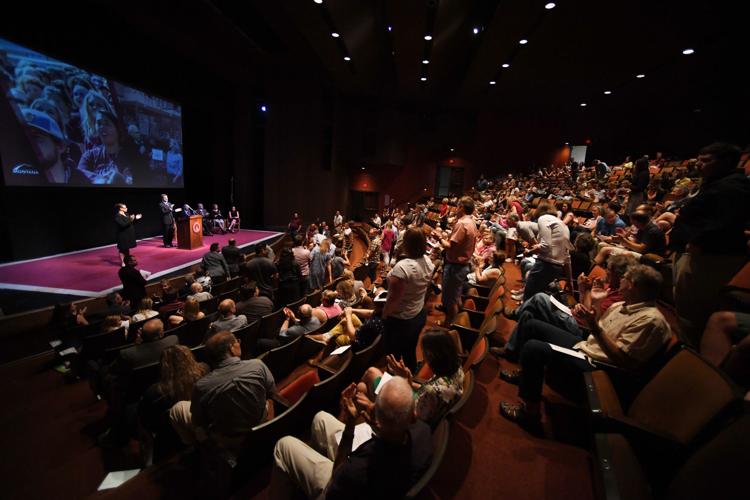 Bodnar asks newly hired members of the UM staff to stand for a round of applause during the speech.

"Over the course of the past year, we've made steady, consistent headway in addressing our challenges," Bodnar told the audience in UM's Montana Theatre.

Joined onstage by faculty, staff and student leaders, Bodnar announced that UM had set goals to improve first-year retention rates above 80%, and its six-year graduation rate to 60%. He spoke to a full house in a theater that seats 499.

As of 2017, retention and graduation rates respectively stood at 72% and 46% for the flagship campus, according to data from the Montana Office of the Commissioner of Higher Education. Nationally, in 2017 the average freshman retention rate was 81%, while the average 6-year graduation rate was 60%, according to the National Center for Education Statistics.

Bodnar called increasing those rates an “ambitious goal,” but noted that UM is already working to better retain students. Bodnar said the university is hiring additional advisers and revising its advising process. He also mentioned its federally-funded TRIO Program for disadvantaged students, whose participants persist at a rate of 88%, and a new pilot program called Montana Project 10 that also aims to boost graduation and retention rates by 10% for lower income students.

“We want to do this at scale, because our students deserve it,” Bodnar said.

He also said UM had reduced its budget shortfall by 60%; a UM official recently noted the projected deficit for the 2020 fiscal year is $4 million, down from $10 million in January 2018 when Bodnar took the helm at UM.

After his speech, Bodnar told reporters that reaching these graduation and retention rates “will take a number of years, and we are in the process of mapping out and placing our investments to help us achieve that over time.” He did not specify how many years it would take.

The retention and graduation targets fell under the broader goal “to place student success at the center of all that we do.” This was one of five “Priorities for Action” Bodnar discussed during his hour-long address. UM also aims to drive excellence in teaching and research, embody the principle of "Mission First, People Always," "partner with place," and "proudly tell the UM story."

The president struck a confident note on UM’s ongoing effort to increase enrollment, which has dropped 33.5% since 2011. UM has increased summer enrollment the last two years, although fall numbers have continued to drop.

“As we all know, overall enrollment does not turn (around) in the span of a year, and it won't this year. But the way to get there is through incremental growth, to grow our class of incoming students of every type,” Bodnar said.

While the size of this year’s freshman class won’t be known until an official count 15 days into fall semester, Bodnar told local business leaders last week that preliminary data suggest this year’s freshman class will be larger than last year’s. He reiterated the projection in his speech, telling the audience that “we have three weeks until census, and so we're anxiously awaiting those numbers, but indicators look promising.”

“What I can tell you with absolute certainty is that we have transformed many of our admissions and orientation processes, and that will bear tremendous fruit over the coming years.” He identified several new enrollment activities, including: a Student Enrollment Communications Center to connect with students by text message; outreach to parents, teachers, guidance counselors and coaches, in addition to prospective students; and increased staffing in financial aid.

He said his faith in the university’s direction had been affirmed over move-in weekend. “We had faculty, students and staff from across the university that rolled out the red carpet for these students.”

Many UM and higher education officials have said it takes time to turn a ship as large as UM, and in his talk, Bodnar said the vessel was making progress.

“We have steadied our ship and can now look across the horizon to where we’re headed,” he said.

He didn't think small when he turned to UM's future, calling on the university community “to shape a University of Montana that is not just the flagship university of this great state, but a flagship for America’s future, an institution that creates inclusive prosperity and sustains democracy.”

Overall, Bodnar’s speech made a good first impression on Christopher MacKay of Rainbow, Oregon, who had just arrived to pursue a master’s degree in natural resource management at the W.A. Franke College of Forestry and Conservation.

“I thought it was interesting,” he said of the address. “I was unaware of some of the retention issues and some of the instability.” He also said it wouldn’t have made UM less attractive for studying forestry, and he himself plans to help improve retention as a teacher's assistant.

“I’m just really looking forward to becoming a part of the community,” he said. MacKay also wants to learn more about UM's priorities.

Summer enrollment at the University of Montana increased 3% over last summer.

The University of Montana has reduced its deficit from roughly $10 million last school year to a projected $4 million for the 2020 fiscal year.

Restaurants, hotels and bars in Missoula no doubt enjoyed a big economic boost from the sold-out Mumford & Sons concert on Aug. 11 at Ogre…

Under the M: Summer enrollment up, Patrick Reilly takes the beat

Reporter Patrick Reilly has taken over the higher education and University of Montana beat.

The No. 1 hospital in Montana sits right here in Missoula.

Just a few days before the start of classes, roughly a fifth of the University of Montana’s housing slots were still empty.

The University of Montana expects to have millions more per year to invest in on-campus improvements, thanks to a $142 million bond issue and …

The University of Montana has planned for a smaller student body, budget and faculty in the 2020 Fiscal Year.

The new Grizzly Esports team at the University of Montana may train in a basement, but they’re hoping to break video gaming stereotypes.

University of Montana president Seth Bodnar addresses a room full of UM faculty and staff in the PARTV building on campus during the State of the University address in this Aug. 20, 2019, file photo.

Bodnar asks newly hired members of the UM staff to stand for a round of applause during the speech.