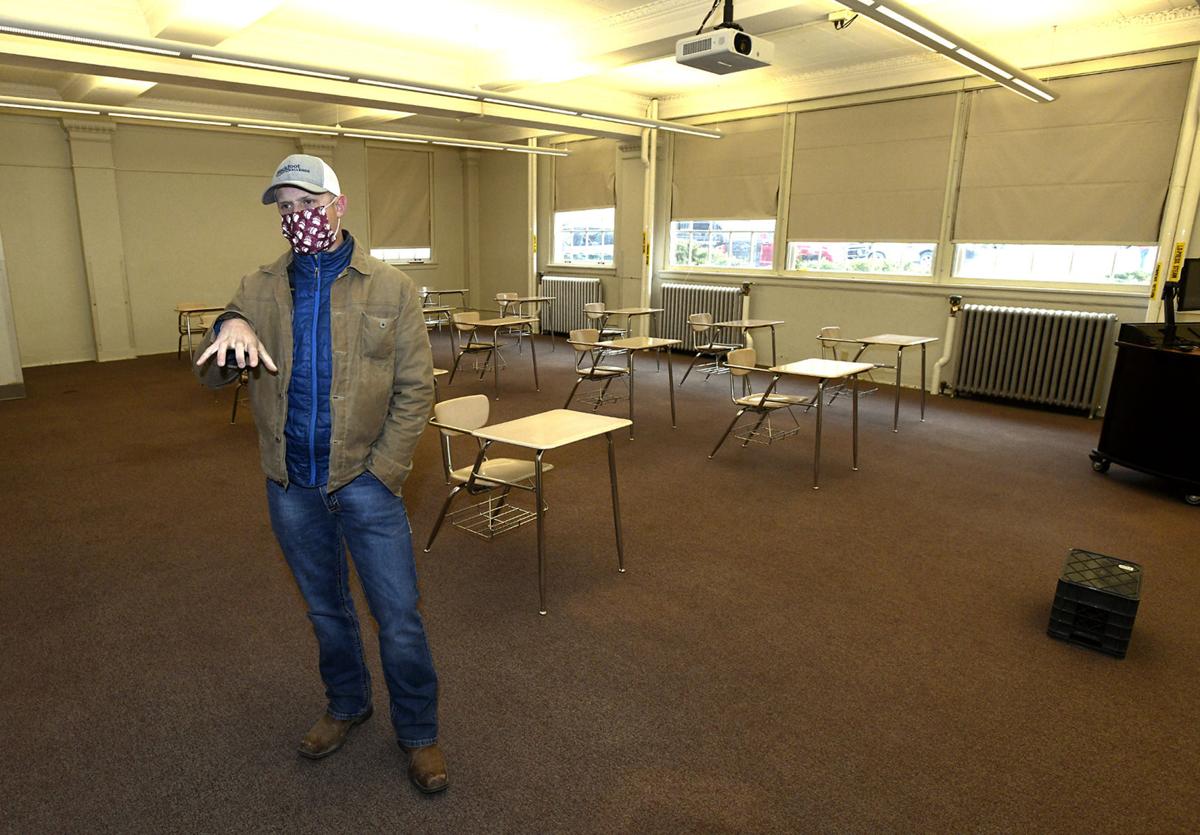 Alan Townsend, dean of the W.A. Franke College of Forestry and Conservation at the University of Montana, said classrooms in the building can't accommodate any of the college's larger classes. 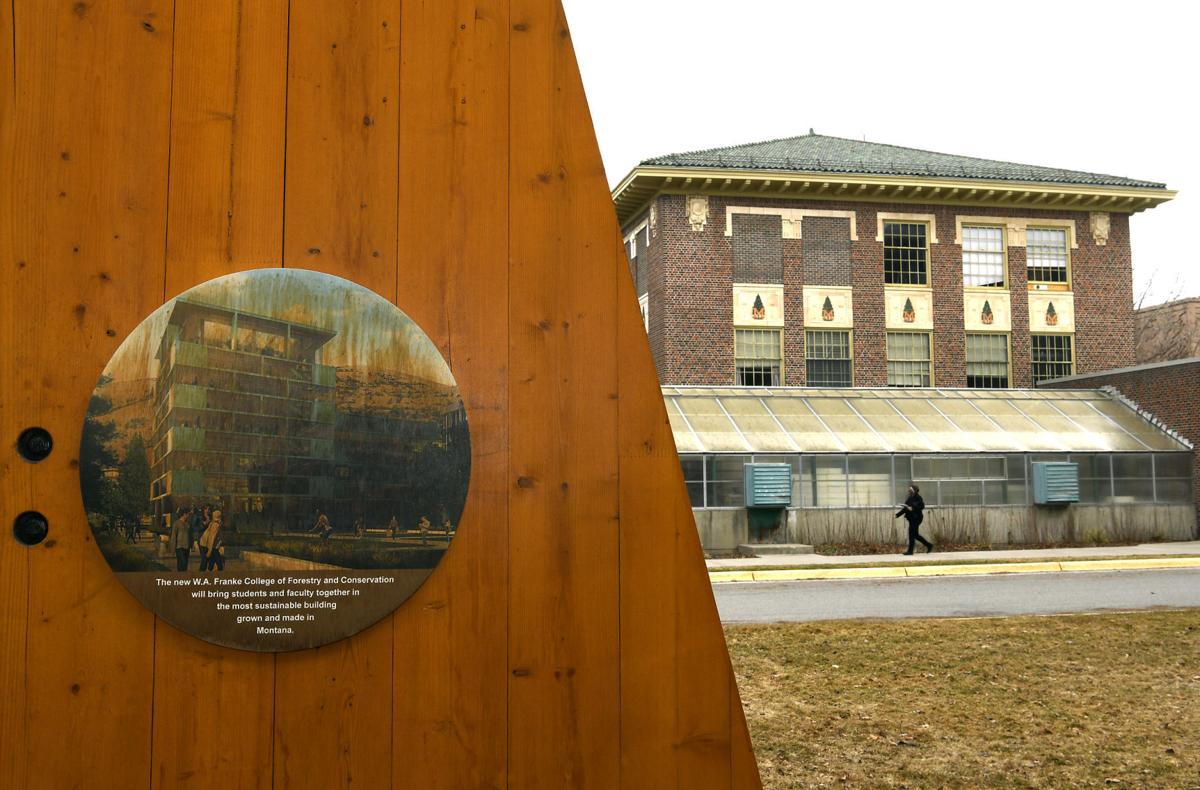 A cross-laminated timber sculpture sits next to the forestry building on UM's campus. 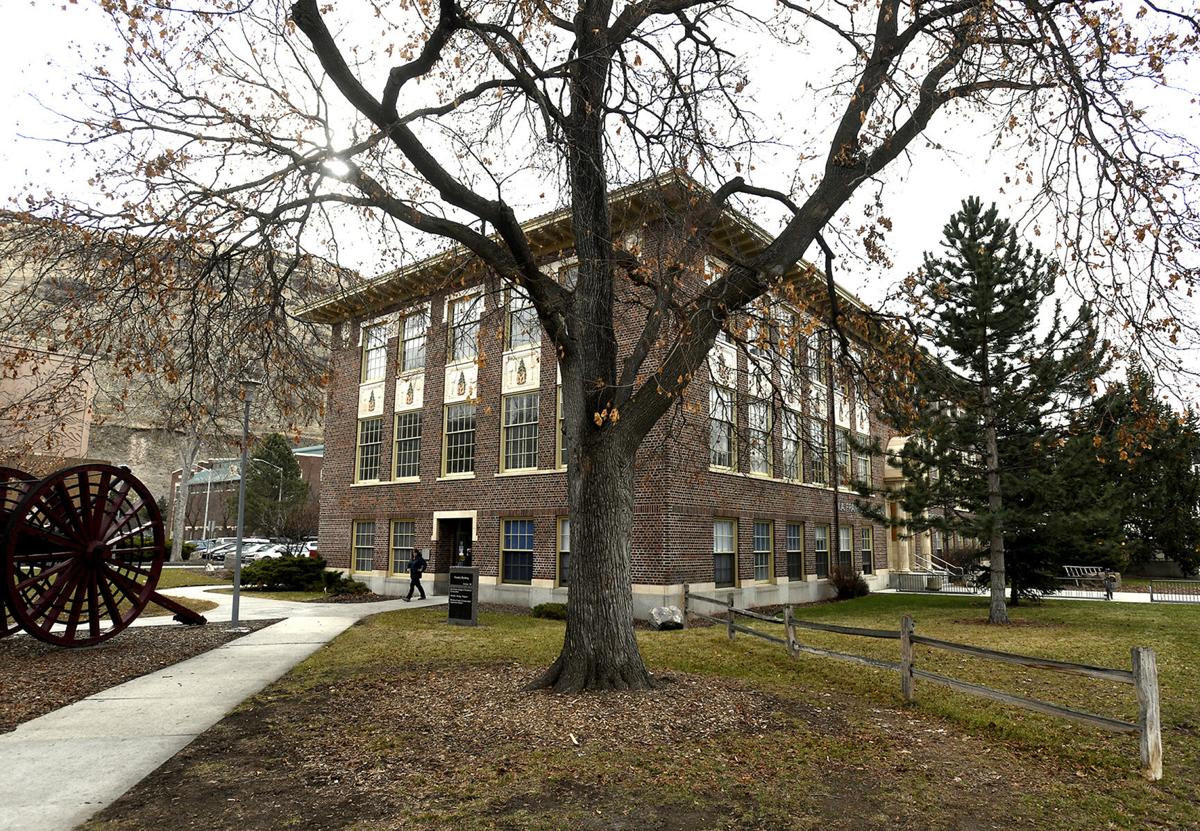 The UM forestry building, opened in 1922, would remain on campus. About 800 students and staff in the college are spread across seven buildings.

As the W.A. Franke College of Forestry and Conservation outgrows its nearly 100-year-old building at University of Montana, the Missoula flagship is requesting money from the Legislature to construct a new forestry building from wood products grown, harvested and manufactured in the state.

Instead of being framed by imported steel and concrete, the proposed $45 million forestry building would be built with cross-laminated timber, a material made from wood panels that are glued atop one another in layers to form larger slabs.

“It just makes perfect sense for a forestry building and tells the story, and it is a much more sustainable and reasonable way to go,” said Alan Townsend, the Franke College dean. “And it can look really cool. It’d be a pretty iconic building on campus.”

The new building would provide more space for forestry students and staff. The college has continued to see an increase in student interest despite an overall decrease in enrollment at UM, while also providing an economic boost to Montana’s wood products industry.

The project hinges on the state Legislature's approval of UM’s request for $25 million in bonds and permission to raise an additional $20 million to finance the project. The ask from UM is included among other appropriations in House Bill 14, which passed out of the House Appropriations Committee on Thursday and heads to the House floor for a vote on Tuesday.

Businesses in Montana are already showing support for the building, touting the economic benefits of using locally produced cross-laminated timber. UM has not bid the project yet, but the timber for the 60,000- to 70,000-square-foot building would likely come from Douglas fir trees in western Montana, said UM spokesman Dave Kuntz. SmartLam, one of the world’s largest cross-laminated timber manufacturers, located in Columbia Falls, has also shown support for the project.

“It will provide a lot of jobs in the woods and in the mills, employ manufacturers, engineers, builders and transporters so it's a win-win for everybody,” said Julia Altemus, executive director of the Montana Wood Products Association. “It'll be a nice addition to the university and we’ll be able to showcase what we can do here in Montana.”

The college houses UM’s top-ranked wildlife biology program and has been touted by the university as a global leader in the fields of natural resources management, forest health, ecology and fire science.

As of Wednesday afternoon, the college was up 88% in admissions from the same week last year, or an increase of 317 students, Townsend said in an email. That number does not mean that those students will attend UM in the fall, but it’s evidence that the college will see a significant bump in student numbers next fall, he added.

The increase in student interest is spread across all of the college’s major programs, Townsend said.

“We have strong student interest but keeping those students coming, honestly, very much hinges on them being able to work and learn in facilities that are competitive with our peers,” Townsend said.

Roughly 700 undergrad students, about 100 graduate students and staff in the college are spread across seven buildings on campus, and Townsend said the classrooms in the forestry building are not big enough for any of the college’s larger classes. The new building would not bring the entire college together, but would provide modern teaching and research spaces as well as “student-centered” learning spaces.

The historic forestry building would not be torn down and UM has not yet decided where the new building would be located on campus, Kuntz said. The design is also still in flux.

The college has long expressed a need for a new building. In 2016, UM accepted a $24 million donation from the Franke family in exchange for the university’s pledge to “use reasonable efforts to obtain funding for a new building for the W.A. Franke College of Forestry and Conservation.” The contract did not set a timeline. In March 2020, the Board of Regents formally endorsed the project.

“The use of mass timber lends to the construction of really airy, open, bright spaces,” Townsend said. “They’re the kinds of spaces you really want to have on a campus.”

The use of cross-laminated timber could provide a more sustainable form of construction.

“One of the biggest benefits of mass timber is, if done properly, the trees and mass timber act as a carbon sequestration point in the building and then if you use proper forest management and replant those trees, you get an additional carbon benefit from the new trees,” said Arnie Didier, COO and founder of Forest Business Network.

A 2014 study in the Journal of Sustainable Forestry on the carbon effects of the use of wood products found that globally, annual CO2 emissions could be reduced by 14% to 31% and fossil fuel consumption could be reduced by 12% to 19% if more buildings and bridges use sustainably harvested wood. That’s because using wood products avoids using fossil fuel energy to make steel and concrete structures, according to the study.

Didier said the use of cross-laminated timber is growing quickly, with about 1,000 buildings slated for construction in 2021. Universities are catching on, too. Clemson, Washington State and the University of Idaho have all embraced the use of mass timber for facilities at their campuses.

Tech companies like Google, Microsoft, Facebook and Amazon are looking to use mass timber as a core product for their buildings because of the environmental benefits of using wood as opposed to concrete and steel, Didier said.

And, the panels can be reused. If built, the new UM College of Forestry could be disassembled in 100 years and reused or repurposed, said Craig Rawlings, president and CEO of the Forest Business Network, in a House Appropriations Committee hearing.

Despite the benefits, the use of cross-laminated timber hasn’t come without some pitfalls. In March of 2018, some panels collapsed during construction of Oregon State University’s College of Forestry building. But the university had used an untested manufacturer, and engineers traced the panel's failure to the glue, the Associated Press reported.

However, as the use of cross-laminated timber has increased, so too have performance and sourcing standards. The Columbia Falls-based company SmartLam was one of the first producers of the timber in the country to be certified under new American National Standards Institute standards to produce architectural-grade cross-laminated timber products.

Facial recognition tech being tested for US flights

Facial recognition tech being tested for US flights

Bryan Dalpes and Rachel Luger were awarded $3,950 in punitive damages and $1,414.50 in damages and special fees by the Missoula County District Court for the death of their 17-month-old lab mix, Betsy.

Missoula man rescued after being buried up to neck in sand

The Missoula Fire Department responded to a call Wednesday afternoon for a report of a person trapped in a silo at a concrete business buried to his neck in sand.

The store will feature laser tag, a mini bowling alley, an arcade, a golf simulator, a playground and a cafe.

As an inspiration to hardworking senior citizens everywhere, Iris the Osprey is back in town and looking for love.

Cheri Diane Rivera, 44, has been located in Washington State.

The guardian of a missing Missoula teen is urging anyone with information to come forward, and hopes emphasizing Tyra Sepulveda’s appearance will aid in search efforts to find her.

Alan Townsend, dean of the W.A. Franke College of Forestry and Conservation at the University of Montana, said classrooms in the building can't accommodate any of the college's larger classes.

A cross-laminated timber sculpture sits next to the forestry building on UM's campus.

The UM forestry building, opened in 1922, would remain on campus. About 800 students and staff in the college are spread across seven buildings.