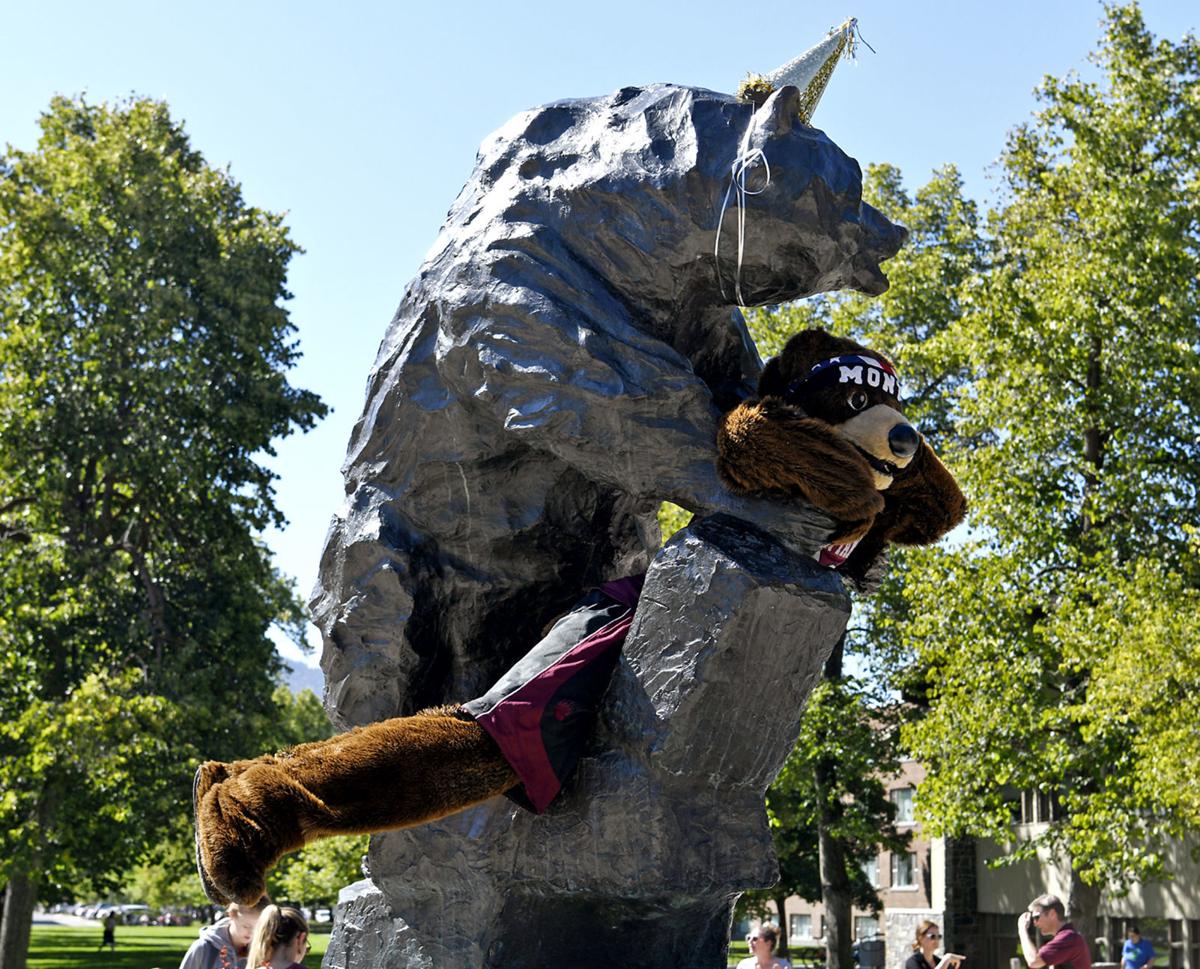 University of Montana mascot Monte poses with the Rudy Autio grizzly bear statue on campus during a celebration Tuesday for the 50th anniversary of the bronze statue's unveiling. Autio, a renowned sculptor, ceramicist and artist and chair of UM's School of Art at the time, was commissioned by former president Robert Pantzer to create the piece that was completed in 1969. 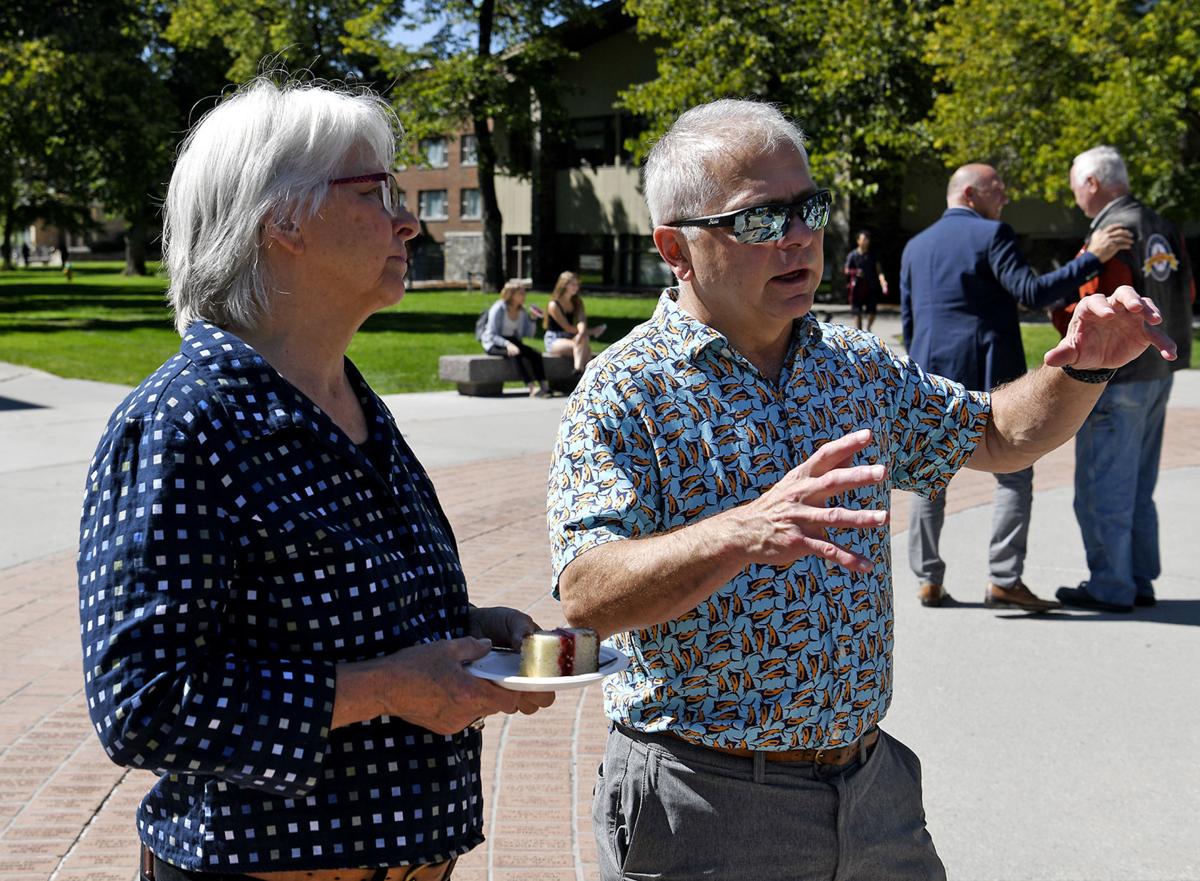 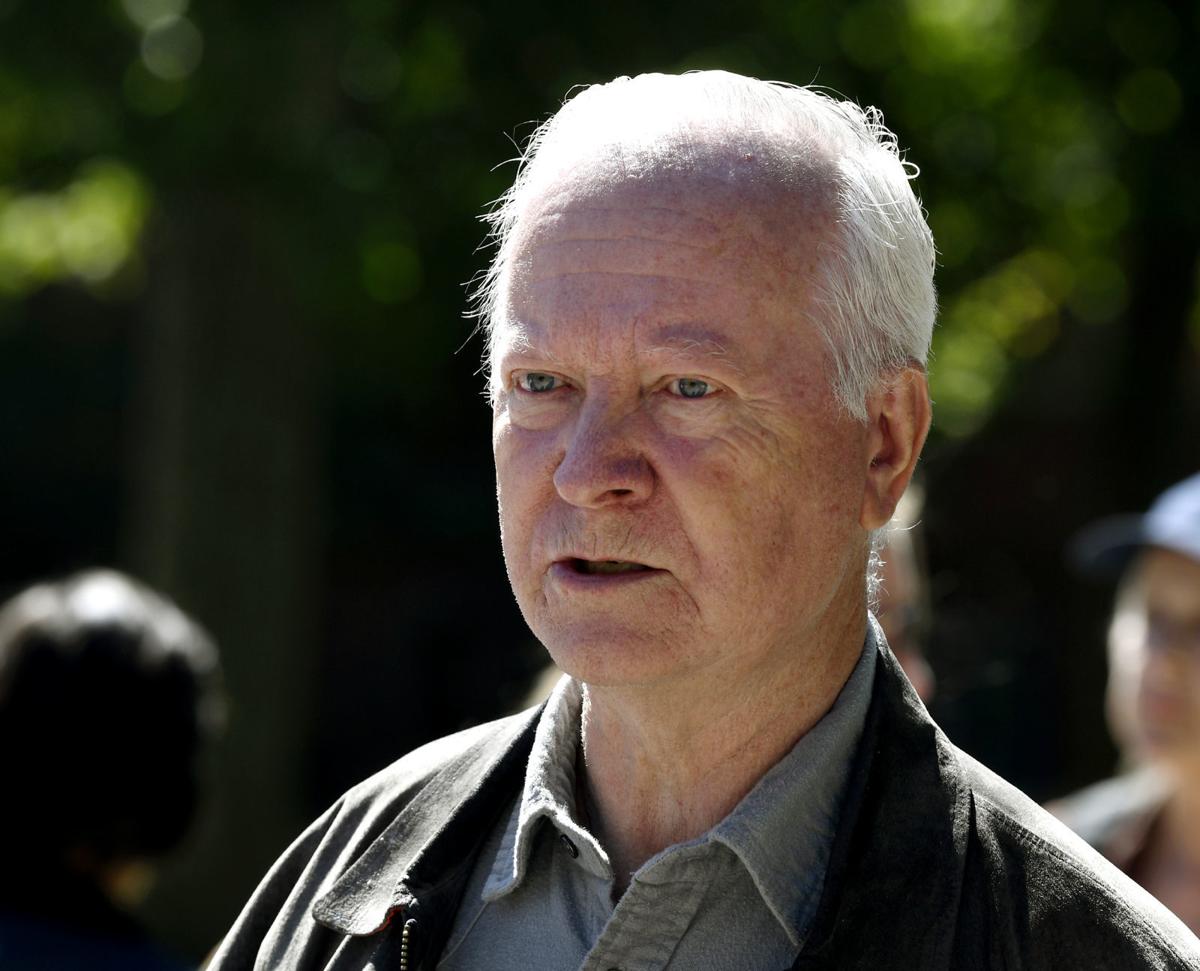 Doug Grimm was an assistant to Rudy Autio when he was working on the bear sculpture. Grimm was present in 1969 when the sculpture was unveiled, and also attended Tuesday's birthday party.

Fifty years ago, Doug Grimm stood on the University of Montana's Oval as his employer's latest creation was unveiled.

The Missoula resident was working as an assistant to famed sculptor and UM faculty member Rudy Autio. "I'd do all the dirty work, like mixing clay," he remembered. For three years, they had been working on a sculpture of a grizzly bear for the University of Montana's campus. And on Aug. 27, 1969 —that year's homecoming day — it was time for the reveal.

The bronze grizzly was hoisted into place by a crane and draped with a tarp, Grimm remembered. When it was pulled back, onlookers "looked at it, hooted and hollered, and went home."

But the bear's had plenty of company since that day. From its perch directly across the Oval from Main Hall, it's watched 50 years' worth of University of Montana students and visitors pass by, and some of them dropped by the circle Tuesday for a 50th birthday party.

"The identity of the university is wrapped up in that sculpture," said Montana Museum of Arts and Culture Director H. Rafael Chacón. UM president Seth Bodnar, also there for the festivities, ventured that it was Montana's most-photographed piece of art.

Autio was chairing UM's School of Art in the late 1960s when then-UM president Robert Pantzer commissioned a grizzly sculpture. Autio immersed himself in the task, remembered his son Lar. "He did a lot of study of grizzlies' form. He realized every bear looks different." He worked through a few different models, transposing their dimensions to larger, clay-and-chicken wire versions using calipers. Grimm remembers standing on a ladder, holding a library book with photos of grizzly bears for Autio to refer to as he worked.

According to a UM press release, the final version was shipped to San Francisco, where a foundry cast it in bronze. Missoula-based Zip Beverages brought it back — and gave the responsibility to truck driver Rad Ladwig.

He had some fun along the way, said his daughter, Cheryl Weber. At truck stops, "he told people, 'Stay away from there, I have a grizzly in there.'" They naturally had to have a look, so he would lead them out to the truck, gingerly open the back doors, and invite them to take a quick, safe peek at the motionless bronze bear.

Ladwig passed away in 2007, but Weber said he always treasured his role in bringing the bear to Missoula. "It was kind of an honor for him to be involved," she said. "He always thought of it as his bear."

The 3-ton grizzly has also outlived its creator; Rudy Autio died in 2007. But Grimm thinks UM has done the artist's work justice.

"He was just so amazed at the way it looks and the way it was presented to the public. … He originally thought it would be off in some corner."

Instead, it keeps watch over a main cross-campus route, well-placed for Tuesday's 50th birthday party, where students received cake and heard "Happy Birthday" performed by UM's marching band. It was the first time one party guest, Soe Thiha Aung, had ever heard that song.

He had come from Myanmar as part of the Mansfield Center's Young Southeast Asian Leaders Initiative, and liked the atmosphere at UM. "It's quite great," he said.

Grimm, meanwhile, found it hard to believe it's been 50 years since he held open books and mixed clay for one of Autio's best-known works.

"Time has passed so quickly," he said.

Trey Hill is painting the largest sculpture he's built in the United States.

One Missoula resident walked away from the Missoula Art Museum's auction with a preview of an installation in August.

Of 'Cedar Fever' and Big Macs: Milestone anniversaries in 2019 have some quirk to them

This year marks the 50th anniversary of the first McDonald’s restaurant in Montana.

The back wall of the 90-year-old Firestone building on East Main Street came down in one dramatic dissolution last Friday.

University of Montana mascot Monte poses with the Rudy Autio grizzly bear statue on campus during a celebration Tuesday for the 50th anniversary of the bronze statue's unveiling. Autio, a renowned sculptor, ceramicist and artist and chair of UM's School of Art at the time, was commissioned by former president Robert Pantzer to create the piece that was completed in 1969.

Doug Grimm was an assistant to Rudy Autio when he was working on the bear sculpture. Grimm was present in 1969 when the sculpture was unveiled, and also attended Tuesday's birthday party.