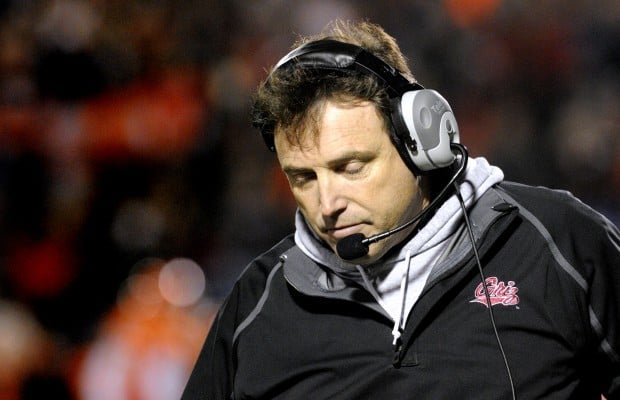 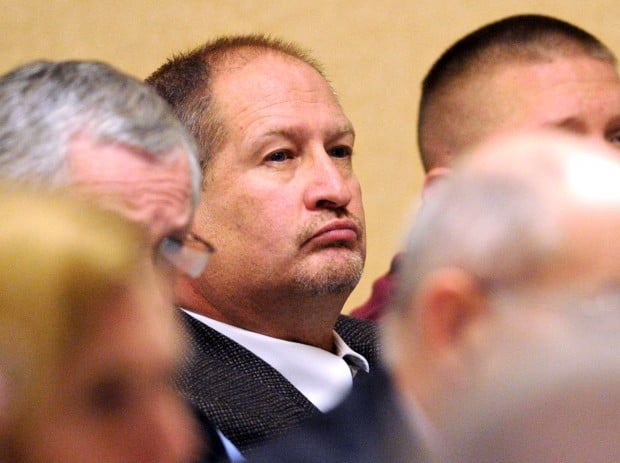 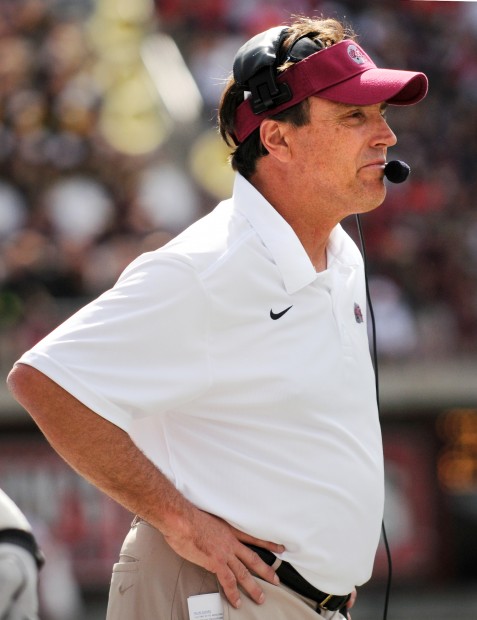 By FRITZ NEIGHBOR of the Missoulian

Under scrutiny for its handling of sexual assault allegations involving athletes, the University of Montana on Thursday fired both football coach Robin Pflugrad and athletic director Jim O’Day.

The moves stunned much of the campus and Missoula community, and left many questions unanswered. University President Royce Engstrom notified Pflugrad and O’Day of his decision in an early morning meeting, and then released a one-paragraph statement saying only that UM “has determined not to renew the contracts” of both men.

Engstrom went on to say both positions will be filled on an interim basis before the end of the week. He was unavailable for further comment.

“We were called in ... for an appointment at quarter to 8,” O’Day said Thursday. “Just to revisit the status of the football program. That’s when we found out.

“I think we were both stunned and shocked. We both know that’s part of the business we’re in. This sort of thing happens from time to time to good people.”

Specific reasons for the dismissals remain to be heard.

“He (Engstrom) just said, ‘We need a change of leadership,’ ” Pflugrad said Thursday evening. “That’s all he said.”

Montana associate athletic director Dave Guffey said he attended a 9:30 a.m. staff meeting where most of the department learned the news.

“Shocked is a good way to describe it,” Guffey said. “Disbelief. ... It could have major negative ramifications on Grizzly athletics and Grizzly football for a long time to come. Speaking from my perspective, it’s pretty scary.”

The football team went 18-7 in two seasons under Pflugrad. The team is currently running through spring drills. A scheduled Friday practice has been closed to the media; it’s the players’ last before going on spring break.

Pflugrad said he spoke to the players at 2:30 p.m. Thursday and that most had heard the news.

“I think I said what I needed to say. I told them I loved each and every one of them and how special they are and they have a special thing going here,” Pflugrad said. “That they’ve got to battle through this – and I believe they will because I believe we recruited the right people.”

Yet UM, and its football program in particular, have come under fire for its handling of a series of sexual assault cases. Allegations of rape involving several athletes surfaced late last season, leading to an independent investigation by former Montana Supreme Court Justice Diane Barz.

Barz reported that nine sexual assaults involving UM students had been investigated, including a December 2010 incident in which two women alleged they were drugged and gang raped by members of the football team.

Barz said that Pflugrad did not properly report that incident to university officials; in mid-March, Engstrom was asked if Pflugrad would face punishment for that and replied: “We have not taken up that matter at this time.”

Pflugrad defended his actions in December 2010.

No players were charged with a crime in that incident, or for an alleged gang rape this past season that hit the news as Montana was set to play Sam Houston in the Football Championship Subdivision semifinals.

But Griz running back Beau Donaldson has since been charged with sexual intercourse without consent for an incident dating back to September 2010. Then on March 9, a UM student took out a restraining order against UM quarterback Jordan Johnson, alleging he’d sexually assaulted her.

A police report filed March 16 alleges a Feb. 4 rape and an investigation is ongoing.

Last Saturday, Johnson returned to the practice field, following a civil no-contact agreement between his lawyer and that of his alleged victim; the TRO was dismissed, though Johnson was to avoid all contact with the student.

After the Grizzlies scrimmaged Saturday, Pflugrad spoke highly about the return of Johnson, who has denied the rape allegation through his lawyer. The quarterback was allowed to return upon the decision of an Athletic Conduct Team, created as part of UM’s new student-athlete code of conduct.

“I think any time you have a person of Jordy’s character and tremendous moral fiber, and he’s your team captain and part of the leadership council, your players are going to be fired up,” Pflugrad said at the time.

That in part led to a rebuttal letter from the alleged victim’s lawyer the day before Pflugrad and O’Day were dismissed, though O’Day wouldn’t make that connection.

“While it’s tough on families and individuals, universities and colleges are much bigger than any person or two people. And they have to do what they feel they have to, to keep things moving forward in a positive direction.”

Clay Christian, Montana’s commissioner of higher education, said Thursday’s dismissals are “the type of decisions that presidents are required to make, and I’m confident in President Engstrom’s decisions and his ability to make them. I’ve been in contact with him and I’m confident in the decision that he had to make.

“I’ve talked to the chair (of the Montana Board of Regents) and she’s talked to other board members. It’s the president’s decision to make and we have a commissioner’s office and a board that stands behind him in making those kinds of decisions.”

Pflugrad did not regret his comments in support of Johnson.

Pflugrad also said on the day the news broke that several football players had been implicated in a sexual assault – on Dec. 17, 2011 – he had every football player questioned in the hours before UM’s game against Sam Houston.

“We interviewed 61 players on game day,” he said. “Sixty-one. We wanted to make sure we were doing the right thing, and if there was someone we thought should be suspended for that game, we would have been sure to do it, or we wouldn’t have spent 2 1/2 hours on it.

“It was my direction. I thought it was the right thing to do.”

One sticking point for UM could be Title IX and how the Office for Civil Rights has interpreted it to include sexual violence. It mandates that universities take the lead in providing a resolution if an incident occurs – that they can’t wait for police to complete their investigation before they decide to act – and that they take steps to prevent a recurrence.

If someone filed a grievance with the OCR that there was a Title IX violation, there is the strong possibility of a lawsuit unless the complaint is resolved.

Pflugrad said he hasn’t heard of any such complaint being filed against UM.

Pflugrad spent part of Thursday at the Missoula law offices of Datsopoulos, McDonald and Lind.

“Just for the protection of myself and my family,” Pflugrad said. “I deal with football, and you know you become the parent of 108 players and for me to even know the legalities – that’s not fair to myself or my family and my assistant coaches. I think it’s my job to protect the assistant coaches and my family, and that includes the players.”

Pflugrad didn’t know what his next move would be.

“I have no idea,” he said. “I’m still in shock; I’ve been that way all day. I know I’ve gotten a lot of support … not only from people I know but from people in the coaching profession, telling me that they know I’ve done the right things and hang in there and good things will happen.”

Pflugrad replaced Bobby Hauck as the Grizzlies’ coach on New Year’s Eve 2009; he signed a three-year contract that has yet to expire. Pflugrad said Thursday that he and his assistants were working under a spoken agreement that there was a three-year contract extension in place – an agreement reached on Christmas Eve that let potential recruits know the Griz staff would be around long-term.

O’Day, who was in his eighth year as Montana’s AD, said no contract issues were discussed Thursday.

“Everything was very quickly done this morning,” he said. “That will be something we’ll probably look at in another week or so.”

After Friday, the Grizzlies’ next spring practice is April 9. The firings take some luster off a scrimmage scheduled to be played under the lights at Washington-Grizzly Stadium on April 14. Spring drills end on April 21.

The Montana Grizzlies, 11-3 last fall, still are a talented group, notwithstanding any transfers in the wake of this upheaval.

Pflugrad counseled the Griz to stay on task, and at UM.

“I told them I expect them to be champions,” he said.

Reporter Fritz Neighbor can be reached at 523-5247 or at fneighbor@missoulian.com.

The same day that University of Montana athletic director Jim O’Day was fired, he got on a plane and flew to New Orleans to watch the Final Fo…

At the very least, the University of Montana will owe more than $100,000 to former athletic director Jim O’Day and head football coach Robin P…

Delaney: ‘There’s a ton to be done’

With 44 years of coaching experience, Mick Delaney has an inkling of what lies ahead in stiff challenges and potential distractions.

The University of Montana has revised its Student-Athlete Conduct Code to make penalties more explicit, enforcement easier, and to clarify who…

A new University of Montana athletic director who can focus on the school’s “powerhouse” reputation will be in place by the fall semester, uni…

When a stranger raped a Montana State University student near campus last month as she walked home shortly before midnight, a text alert went …

Fans of the University of Montana Grizzlies football team won’t be able to follow their favorite players on Twitter anymore. But they can stil…

The continued use of an on-campus office by fired University of Montana football coach Robin Pflugrad may seem strange to the casual onlooker,…

The felony charge, which carries a potential sentence of two years to life in prison, was filed just before the close of business in Missoula County District Court by Suzy Boylan, assistant chief deputy county attorney.

It’s been a rough few years for the Montana Grizzlies football team.

A look at Jim O'Day's tenure at UM

1980: O’Day received a bachelor’s degree in journalism from UM.