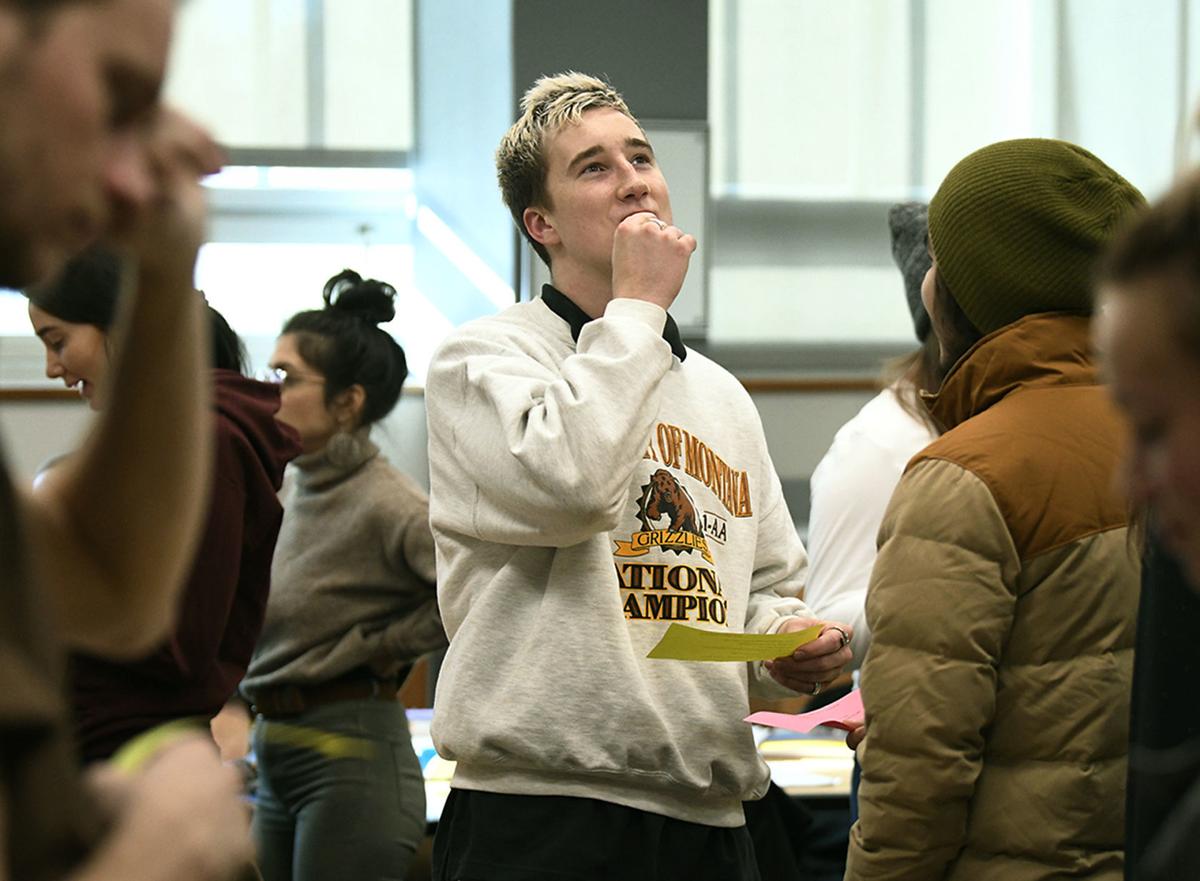 University of Montana junior Noah Grabe practices conversation in Caroline Lonski's Spanish 201 class last week. Challenges have been mounting for the humanities at UM due to declining enrollment, budget cuts and scaling back of faculty and courses. 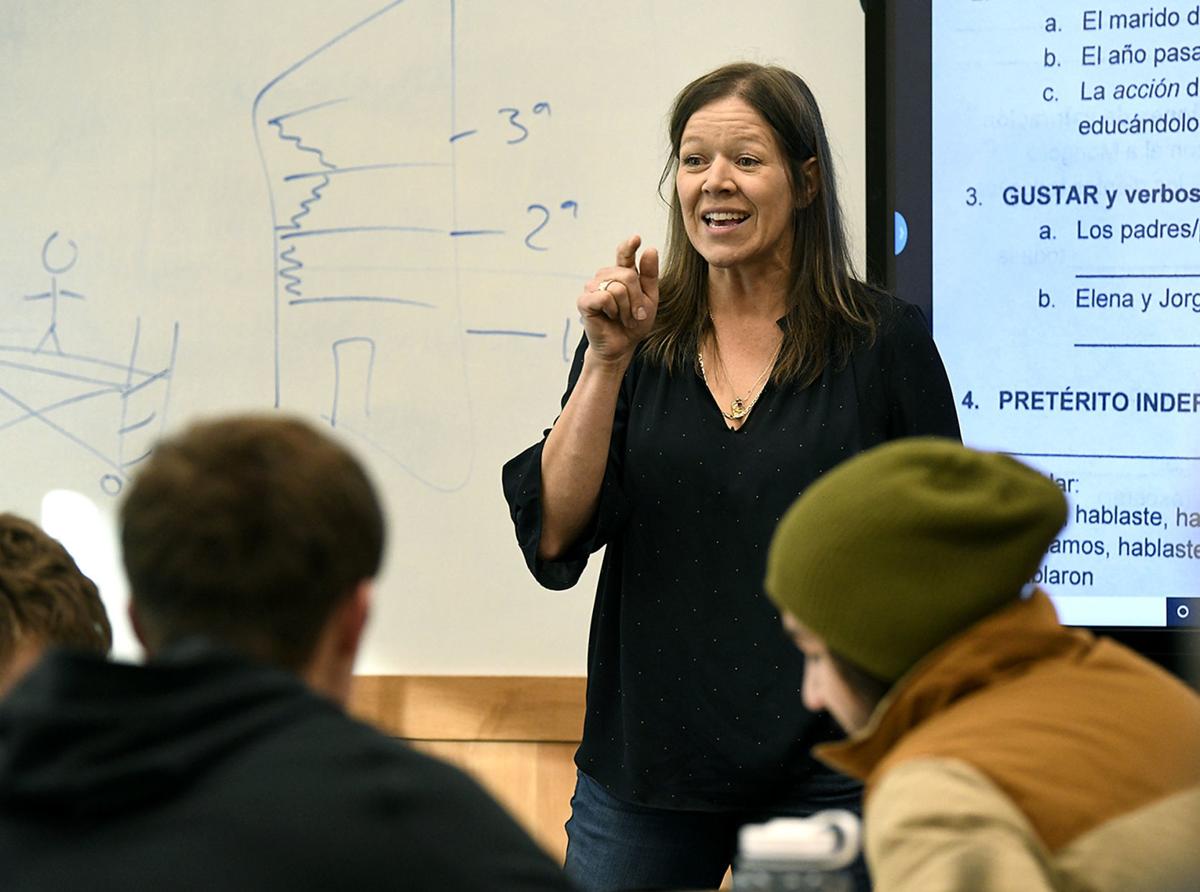 Caroline Lonski teaches a Spanish 201 class at the University of Montana last week. Lonski said even though she works unpaid overtime as class sizes have increased, she and other faculty members care about providing students with a quality education. 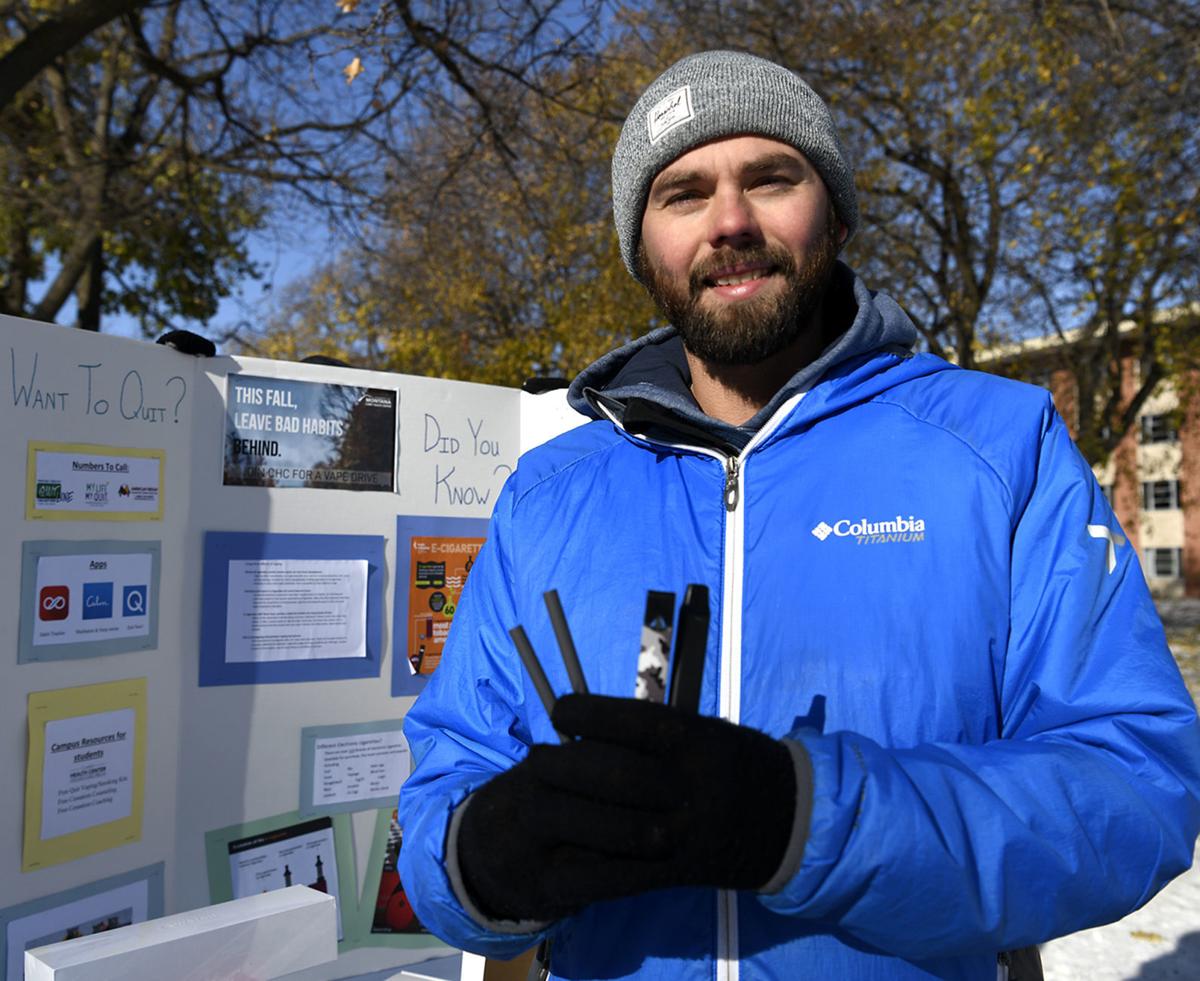 University of Montana senior Bobby Sonsteng holds vape pens turned in during an event on campus last week to collect the devices from people who want to quit vaping. The drive was also done to raise awareness about the negative health effects associated with vaping. 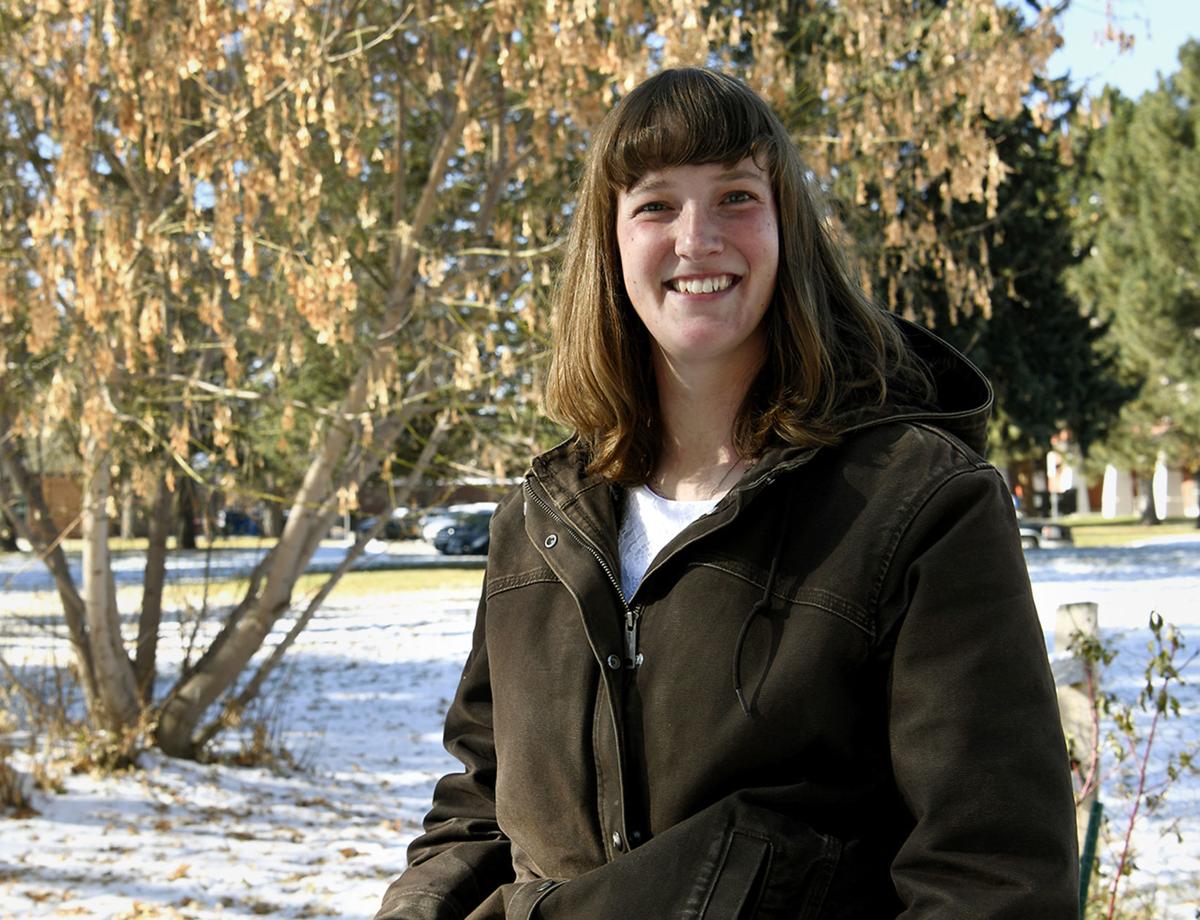 Kaitlyn Strickfaden, a research assistant at the University of Montana's Avian Science Center, is the lead author of a research paper assessing the accuracy of different wildlife survey methods. She and her team focused on two methods of reducing "false negatives" and "false positives" in counting songbirds. 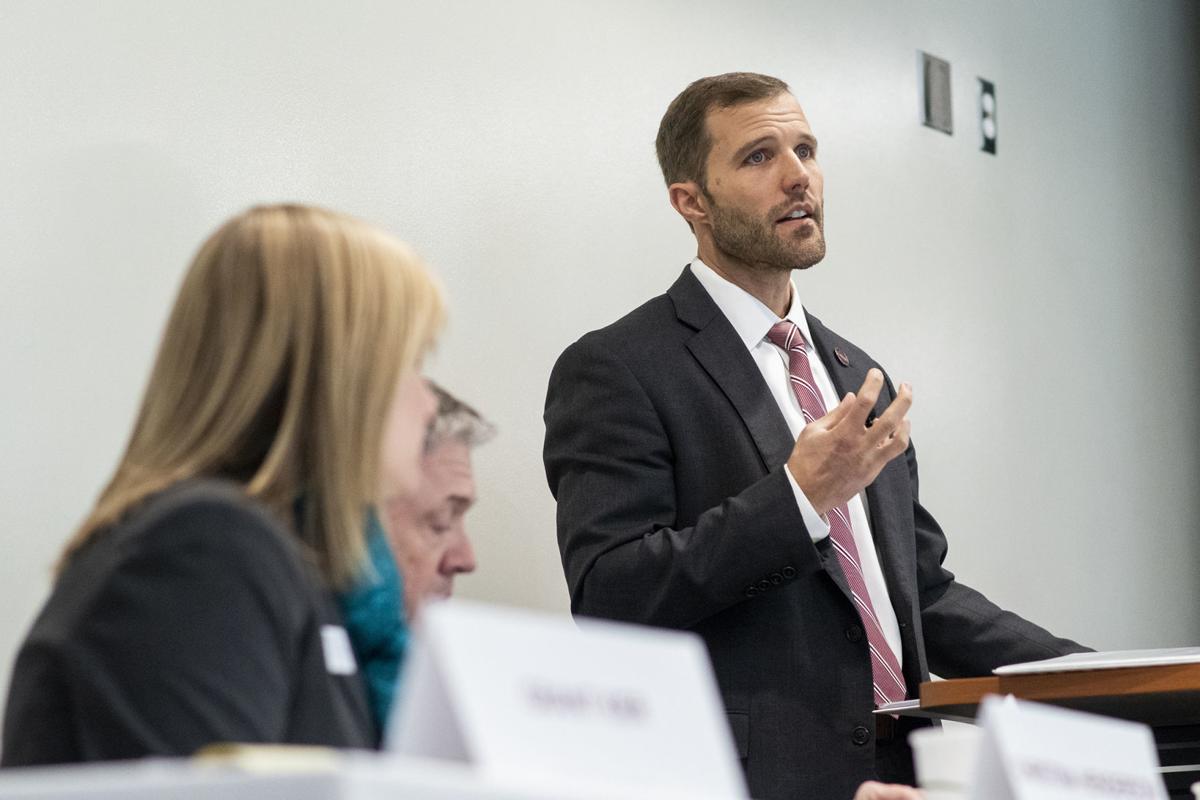 University of Montana President Seth Bodnar speaks during an event highlighting the partnership between community businesses and Missoula College on Monday. The program aims to pair students with local businesses in an effort to strengthen Missoula's work force.

My Spanish is rusty, but I was still able to follow along in Caroline Lonski’s class last week.

Lonski, an adjunct Spanish instructor at the University of Montana, let me sit in on one of her intermediate-level sections for a story about cuts to UM’s College of Humanities and Sciences. With 26 students in that section, she relies on group work to keep everyone talking. Last Tuesday, she had students ask each other, among other things, whether they would get married one day and what their usual punishments were when they were younger.

Preparing for classes this large takes time, and that often requires her and her fellow adjuncts to work more hours than what they’re paid for. “Many of us are working well beyond what we are compensated for because we care so much about providing our students with an excellent education during this time of transition and economic hardship,” she told me.

Bigger class sizes and unpaid overtime are just one way that a 20% budget cut is making itself felt at the College of Humanities and Sciences. Since the story ran, one faculty member told me in an email that "the situation in the humanities is far more grave than one would conclude from the article."

Per UM administration, humanities courses are supposed to impart the critical-thinking skills that will make students “tomorrow-proof.”  The importance of those skills was reiterated at a panel last week, Tech Skills for Tomorrow, covered by my colleague Dave Erickson. Submittable CEO Michael Fitzgerald — a UM creative writing alum — said that "when things get tense, you need people skills."

Perhaps those skills would help in the roughly 500 cases this semester where UM's Business Office attempts to contact students over unpaid bills, according to the Montana Kaimin. The student newspaper reported that one of those students, junior Karlee Trebesch, briefly got dropped from all her classes because of parking tickets she didn't know she hadn't paid. The issue got resolved, and she got reinstated, but the Kaimin reports that "both parties were unsure where the communication went wrong."

In the three years since my own undergraduate days, a new vice has come to America's campuses: vaping. I witnessed the addictive power of nicotine in the form of my classmates huddled outside for a smoke in Chicago's subzero winter temperatures. Now, my colleague Cameron Evans reports, vaping pens and their fruity aromas are commonplace at UM and even in high schools and middle schools. With vaping-related deaths on the rise, Gov. Steve Bullock and vape shop owners are locked in a legal battle over whether to ban them — and UM students are trying to persuade their classmates to quit.

Turning to a more uplifting subject, the W.A. Franke College of Forestry and Conservation is still churning out ecological research, and one of its latest contributions comes from a recent graduate. Kaitlyn Strickfaden has found that having two observers survey birds, instead of just one, can keep nonexistent birds from getting counted — and ultimately inform better management decisions.

UM’s wildlife biology program brought Strickfaden out here from Illinois. Having gotten my own degree in the Land of Lincoln, I agree with her comparison: “I love it out here in the Northwest, and there's a lot more opportunities for recreation, for going out and seeing amazing things versus being in a cornfield.”

Stay current on the University of Montana and other higher education news in Montana with the Missoulian's weekly email, Under the M. This newsletter will land in your email box mostly on Tuesdays. Got a news tip? Want to hear more about something at UM? Missoula College? The Commissioner's Office? Shoot a note to patrick.reilly@missoulian.com. My colleague Matt Neuman has also started a newsletter on Missoula city and county government, which he entitled "Urban Scrawl" after much debate. Thank you for reading, and please sign up here if you'd like to subscribe.

The University of Montana's budget cuts are taking a toll on students in the College of Humanities and Sciences.