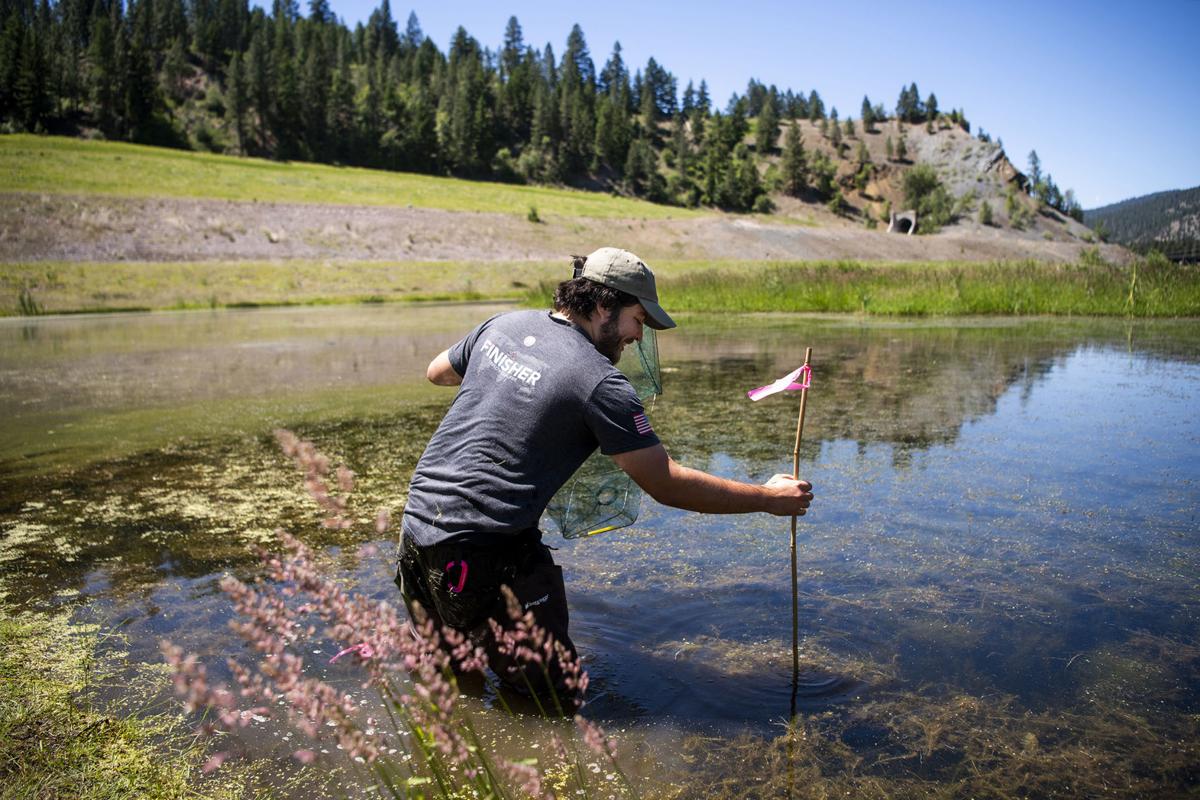 Jeremy Jacobs, a senior wildlife biology major at the University of Montana, places markers in a pond at Milltown State Park on Thursday. 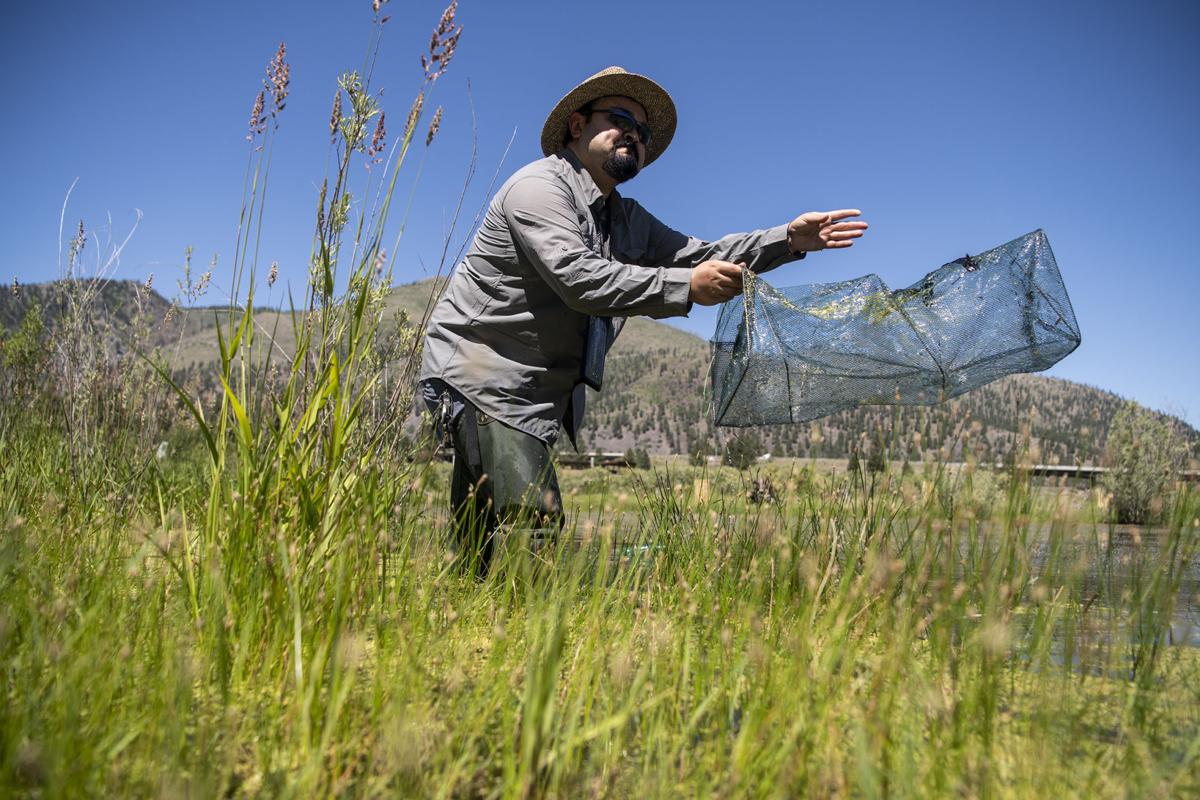 Erim Gomez, University of Montana assistant professor of wildlife biology, urges those who find turtles in the wild to leave them be to allow them to nest and lay eggs. 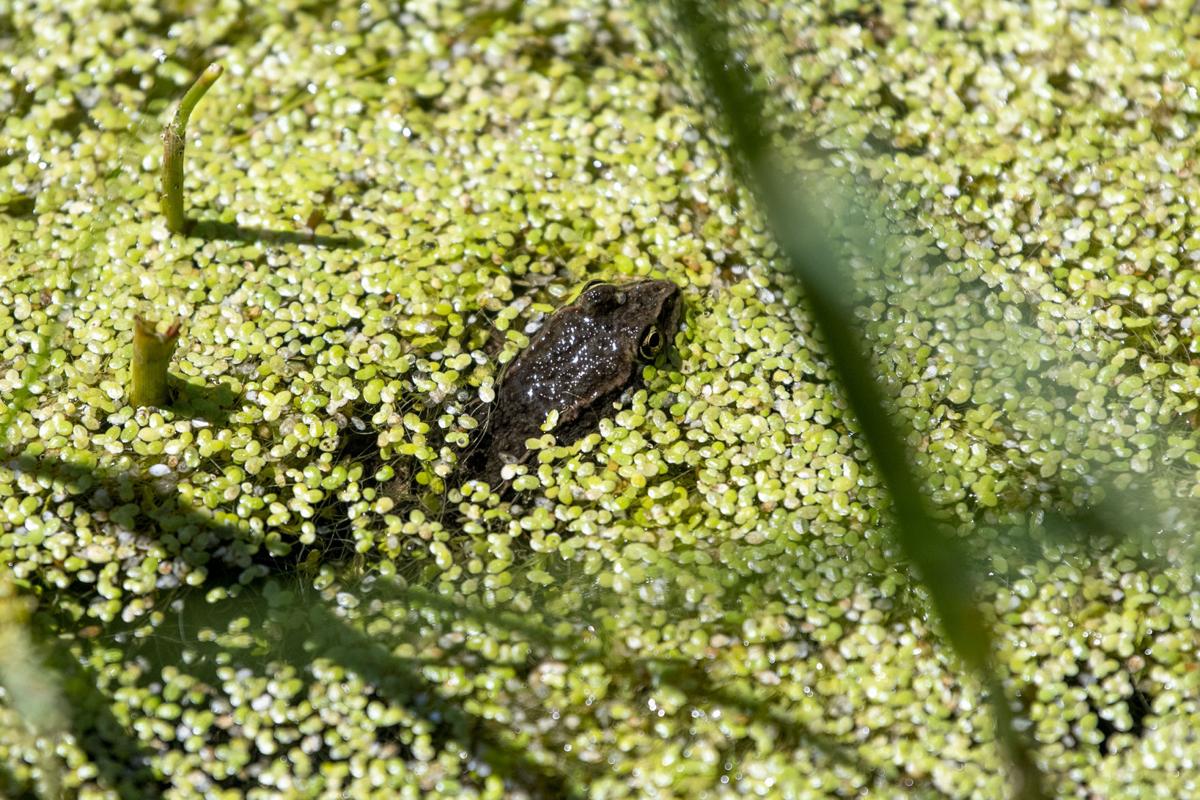 A Columbia spotted frog stands in a pond at Milltown State Park. The new floodplain, once buried under toxic sludge, has since been revegetated by natural and artificial means.

MILLTOWN — Why did the turtle climb the hill?

The answer apparently eludes many well-intentioned people who keep picking up western painted turtles and putting them back in ponds or rivers.

What they don’t realize, according to University of Montana wildlife biology assistant professor Erim Gomez, is that the move actually sets back turtle survival.

Gomez and his students had been combing Milltown State Park researching frog and salamander reproduction when they came across a fresh nest of turtle eggs on a little hilltop. Soon afterward, they met another park visitor who said they’d just “rescued” a turtle that couldn’t find the water.

“It had been hiking up the hill, probably to lay its eggs, and this person moved it back to the pond,” Gomez said. “They should have just left it alone.”

Wildlife permeate deep into Missoula’s urban landscapes. And every spring, misunderstandings of how those creatures live and what their actions mean result in harm or disruption to their lives.

The most frequent problem involves whitetail deer fawns, barely bigger than cats in their spotted tan coats this time of year. Montana Fish, Wildlife & Parks spokeswoman Vivaca Crowser said she braces for calls from residents certain that a deer doe has abandoned its baby.

“In almost every case, the answer is just leave it there and it’s going to be OK,” Crowser said. “It’s tricky for folks to understand how long a period of time adults leave babies. They’re off getting food or something, and that’s natural for them. It could be several days, which is alarming for people.”

In addition to deer calls, Crowser said she regularly fields alerts about lost ducklings, goslings and other birds that can’t find a nest. The chances of a human successfully raising a wild baby without biology training are lousy.

However, there are occasions where human intervention is useful. Crowser occasionally gets a call about a fawn caught in a window well or entangled in a fence. As handling a baby in the presence of its agitated mother poses a safety risk for all involved, she said it’s a good idea to seek professional help.

And growing up wild isn’t easy. Many of the turtle eggs Gomez has found in Milltown State Park nests have already been plundered, probably by birds or raccoons, he said. His students have also had a hard time finding eggs of the Sierra chorus frogs and long-toed salamanders they’re looking for. The only species doing well in their study is the Columbia spotted frog, for which they’ve found several egg masses and tadpoles.

The new floodplain south of Milltown and Bonner spent a century buried under toxic sludge held behind the former Milltown Dam until it was removed in 2012. Since then, it’s been revegetated by natural and artificial means.

“The goal of the project is to see if we’re having successful breeding as wildlife recolonize the riverbed,” Gomez said.

The loss of some turtle nests isn't too concerning to Gomez. Western painted turtles lay eggs two or three times a year. They also have a good sense of navigation.

“It’s our only native turtle in western Montana,” Gomez said. “It’s best to leave them alone, unless it's crossing a road and in danger of getting hit. Then just pick it up and put it down in the direction it was headed.”

Pygmies in the depths: Tiny whitefish poses riddles for biologists

To help keep the Clark Fork River from getting over-loved, Missoula’s Three Rivers Collaborative will field “river ambassadors” this summer.

In the seemingly endless grasslands of Phillips County where Mark Hebblewhite hunts pronghorn antelope, new research has revealed the hidden routes those herds take to stay healthy and strong from season to season.

FWP pulls back on science work

In front of visitors and thousands of blooming camas plants, Master Tribal Interpreter Roger Amerman shared his in-depth knowledge of the cultural ecology of the Montana native plant.

Jeremy Jacobs, a senior wildlife biology major at the University of Montana, places markers in a pond at Milltown State Park on Thursday.

Erim Gomez, University of Montana assistant professor of wildlife biology, urges those who find turtles in the wild to leave them be to allow them to nest and lay eggs.

A Columbia spotted frog stands in a pond at Milltown State Park. The new floodplain, once buried under toxic sludge, has since been revegetated by natural and artificial means.