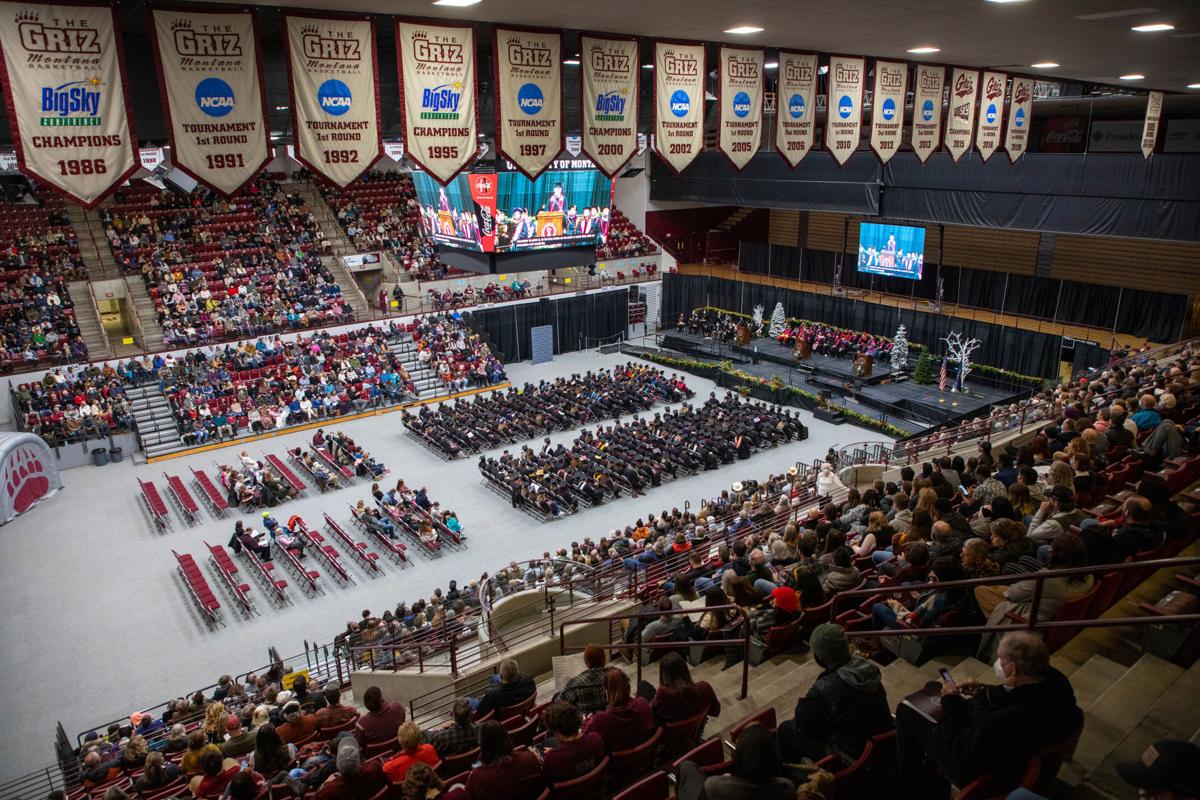 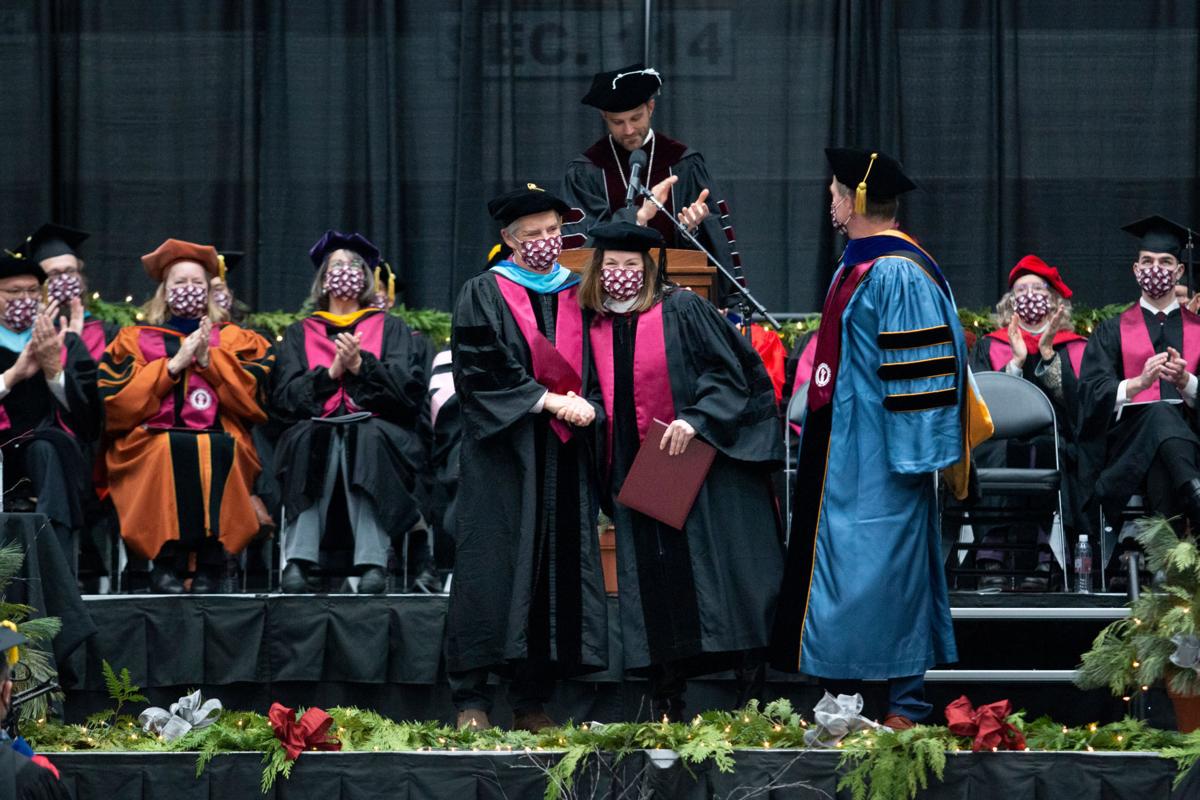 Honorary doctorate recipient Colleen McGuire shares a hug and a handshake with Provost Reed Humphrey as UM President Seth Bodnar applauds behind them. 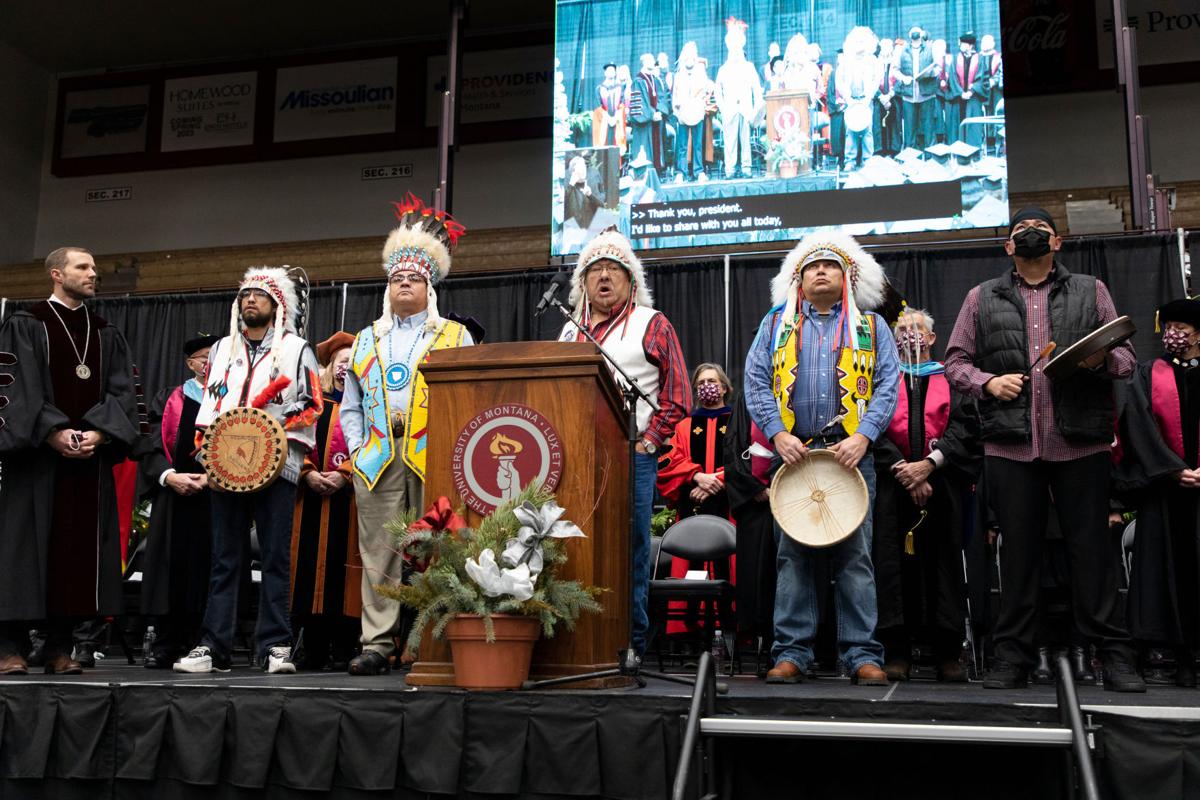 The Rawhide Orchestra performs the warrior society song to honor the graduates and the late Blackfeet Chief Earl Old Person. 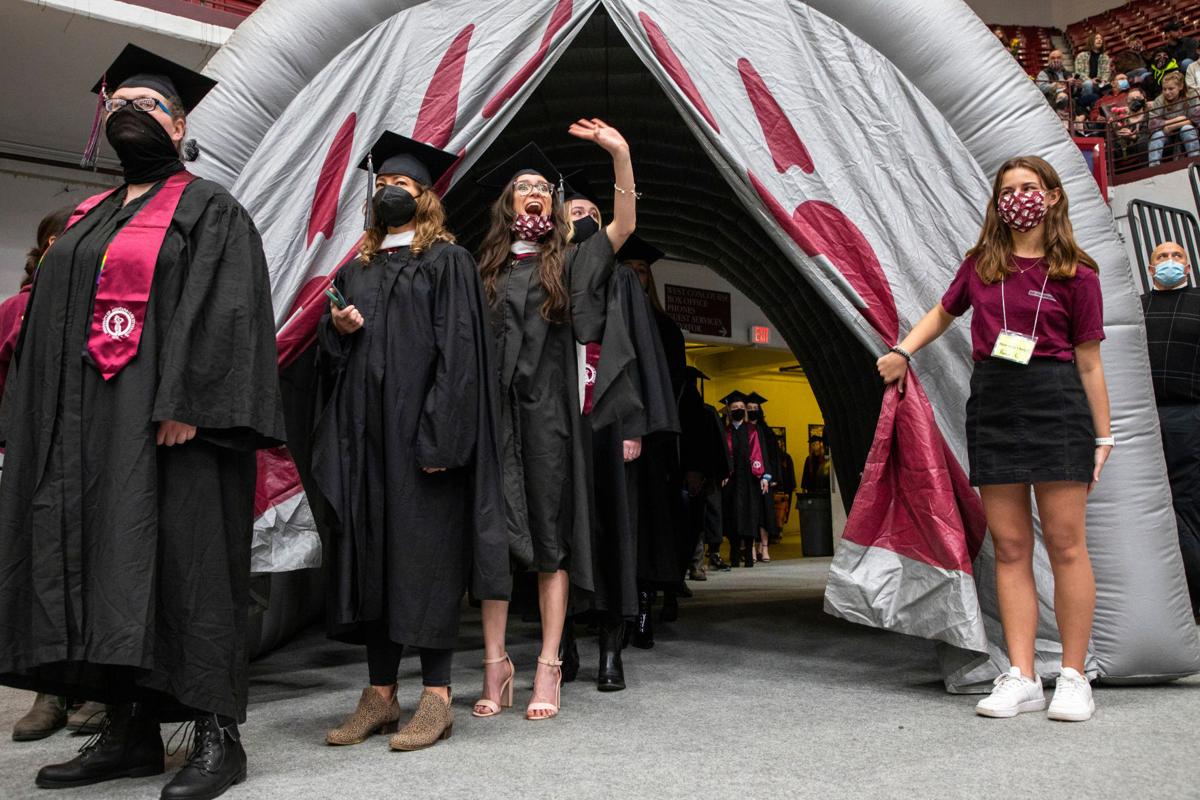 Nearly 1,000 students graduated from the University of Montana last Saturday in the first in-person fall commencement ceremony at the Adams Center in two years due to the COVID pandemic.

About 250 of the degree candidates attended the event and walked across the stage to receive their diplomas, while a majority of graduates opted for virtual participation.

“To our graduates, congratulations. Today, we come together to celebrate each of you and your incredible accomplishments at the University of Montana,” said UM President Seth Bodnar. “I’m so proud of you and so excited to see the impact you will have on our state, our country and our world.”

The graduation ceremony was also the first in over 25 years that the late Blackfeet Chief Earl Old Person was not in attendance to celebrate the graduates with a traditional honor song. Old Person died in October at the age of 92.

“In addition to being the longest-serving elected tribal leader in the country, Chief Old Person was also a dedicated and beloved member of the UM family,” Bodnar said. “He was a friend to me and to so many others here at the University of Montana.”

Bodnar called for a moment of silence to commemorate Old Person’s legacy and impact on the university before the Rawhide Orchestra took the stage and performed an honor song. The members of the group said they usually perform the flag song at commencement ceremonies, but this year they chose their warrior society song to honor Old Person.

Associated Students of UM President Noah Durnell shared an excerpt from Carl Sagan’s book “Pale Blue Dot” during his speech, which highlighted human responsibility to care for each other and the planet.

“It was oftentimes a stressful and scary one, but ultimately it was a worthy investment and I look across this room as absolute proof of that,” he continued.

Following Durnell's speech, Bodnar presented Colleen McGuire with an honorary doctorate of humane letters. A UM graduate, McGuire served a historic 32-year military career as the first woman from Montana to rise to the rank of brigadier general, as well as the first-ever woman to serve as provost marshal general of the U.S. Army, among other accolades.

McGuire graduated with a bachelor’s degree in radio and broadcast journalism in a fall commencement ceremony 42 years ago. She did not attend her ceremony in person and joked that she was grateful for the “do-over” so that her family would finally be able to get a photo of her in graduation regalia.

McGuire spoke about how some “disappointing” assignments throughout her military career informed her leadership.

“Now if you can find that sweet spot in your chosen profession, where you enjoy those with whom you work, you operate in or contribute to an environment that strives to be fair and consistent, if you can serve with a greater purpose while doing something you love, then you’ve found success in your career and your life,” McGuire said.

“As a school district we really can’t do our work and the work that we need to do without the support of the community, and that’s obviously what we’re seeing today,” said MCPS Superintendent Rob Watson.

Born and raised in Missoula, Colleen McGuire is adding another prestigious honor in retirement to her already impressive resume.

Dr. Pardis Mahdavi was chosen after a nationwide search, and she will begin the job in early summer 2022.

After nearly three years and three rounds of cancer treatment, 14-year-old Jack Berry is cancer-free and ready for his life to return to normal.

'I could do big things': Polson High senior receives full ride to Northwestern

A Milltown resident announced that they are withdrawing their candidacy to serve as a Missoula County School Board trustee just six days after filing following allegations of rape and violence.

School kitchens across the state are looking for new ways to incorporate healthy, locally sourced ingredients in their daily recipes, including the staff at Target Range School District.

The value of a neighborhood school: Celebrating 100 years of Paxson Elementary

Honorary doctorate recipient Colleen McGuire shares a hug and a handshake with Provost Reed Humphrey as UM President Seth Bodnar applauds behind them.

The Rawhide Orchestra performs the warrior society song to honor the graduates and the late Blackfeet Chief Earl Old Person.