The University of Montana is facing a $966,614 penalty for reporting "inaccurate and misleading" crime statistics — on everything from liquor violations to rape — from 2012 to 2015, according to a letter from the U.S. Department of Education.

UM’s fine appears to be one of the highest on record for campus security issues, after the nearly $2.4 million fine levied against Pennsylvania State University, according to a federal database with statistics from 2010 to 2017 and an earlier announcement from the Department of Education.

UM will appeal the dollar amount even though it concurs with the findings, said communications director Paula Short. She noted that the fine is based on data that UM itself reclassified after a request from the department.

"U of M doesn't dispute the data changes, as we're the ones that made those," Short said. "We stand by that piece. We feel like the magnitude of the fine is something we want to discuss with the DOE, and we are going to exercise our avenues to do that as outlined in the letter."

In the letter to UM President Seth Bodnar, Department of Education (DOE) official Susan Crim outlined the separate fines the federal agency plans to levy, and its rationale.

"UM's violations of the Clery Act and the Department's regulations are very serious," said the letter. "UM's current and prospective students and employees rely on the institution to provide accurate disclosures of campus crime statistics so they can make informed decisions about their personal safety.

"UM provided its current students and employees with inaccurate and misleading crime statistics for calendar years 2012 through 2015 as part of its … (annual security reports)."

The Jeanne Clery Act requires colleges and universities that receive federal funds to report crime statistics so the public can assess campus safety.

In the past, UM swept rape reports under the rug. However, since a federal investigation into the flagship for mishandling reports of rape and sexual harassment and an ensuing 2013 agreement between the campus and the U.S. Departments of Justice and Education, UM has worked hard to focus on student safety.

"Our students and their safety are our top priority," President Bodnar said in an email Tuesday. "The University of Montana has been recognized by many as a blueprint for other universities in creating a safe and secure campus, and we aim every year to be the safest campus in the country."

Department of Education press officer Alberto Betancourt did not respond by press time to questions, including the reason the agency is levying fines so long after the campus submitted its reports.

The review started in 2011, when the department conducted a campus crime program assessment at UM. At the time, it found that UM did not properly classify crimes or publish accurate and complete statistics from 2009 to 2011. Based on those findings and media reports of mishandled sexual assault and harassment offenses, the department expanded its review to 2012 through 2015.

In January 2017, the department asked UM to review its earlier crime statistics "to determine the extent of underreported and misclassified crimes," the letter said. It said UM acknowledged underreporting and discrepancies in April 2017, and it corrected data in its subsequent annual report.

However, the corrections by the university do not appear to influence at least the initial fine.

"An institution's correction of violations after the fact does not diminish the seriousness of reporting inaccurate data on campus crime statistics at the time the crimes occurred," said the letter from Crim, director of the agency's Administrative Actions and Appeals Service Group, Federal Student Aid/Enforcement Unit.
"Because UM omitted numerous crime statistics … it violated its obligation to provide students and employees accurate information regarding the crime activity on and surrounding its campuses."
***

Communications director Short said when UM reviewed its crime statistics, it erred on the side of inclusion if there was any question about whether the item should be cited. "Those differences in that corrected data form the basis for the fine."

In its 2013 report, UM initially reported nine "forcible" sexual offenses, and after review, it added one, according to data in the letter. In its 2015 report, it reported zero rapes, and it added six upon review.

Claudia Denker-Eccles, who Short said has been coordinating Clery activities at UM, said some of the omissions are due to the way the Missoula Police Department used to report crimes. In the past, a dispatch report did not necessarily result in a full police report, she said; since UM bases statistics on police reports, it would have missed those items.

In other cases, the way the crimes were classified changed, she said, so a crime that used to be considered a theft would be deemed a burglary instead under updated definitions.

"That's one reason we went back and said, 'Let's take a closer look,'" Denker-Eccles said.

Amending crime reports incurs fees, but campus officials said the flagship has an incentive to be a leader in safety, and precise reporting is part of that effort.

In fact, Denker-Eccles said the annual report serves as a piece of consumer information for prospective students and parents along with employees and current students. As such, she said it should provide accurate information about campus safety.

"The university truly wants to be transparent and up front about what takes place here," Denker-Eccles said. "That's the whole idea behind the Clery Act."

Short agreed: "I would underscore that. The statistics and those numbers are important, but the bigger picture is that commitment to safety."

Bodnar also noted UM is striving both to create a safe campus and to submit accurate data.

"We will continue to place a high priority on ensuring not just that we have a safe and secure campus for our students to learn and thrive, but also that our submissions to the Department of Education are consistent with current Clery guidance," Bodnar said. 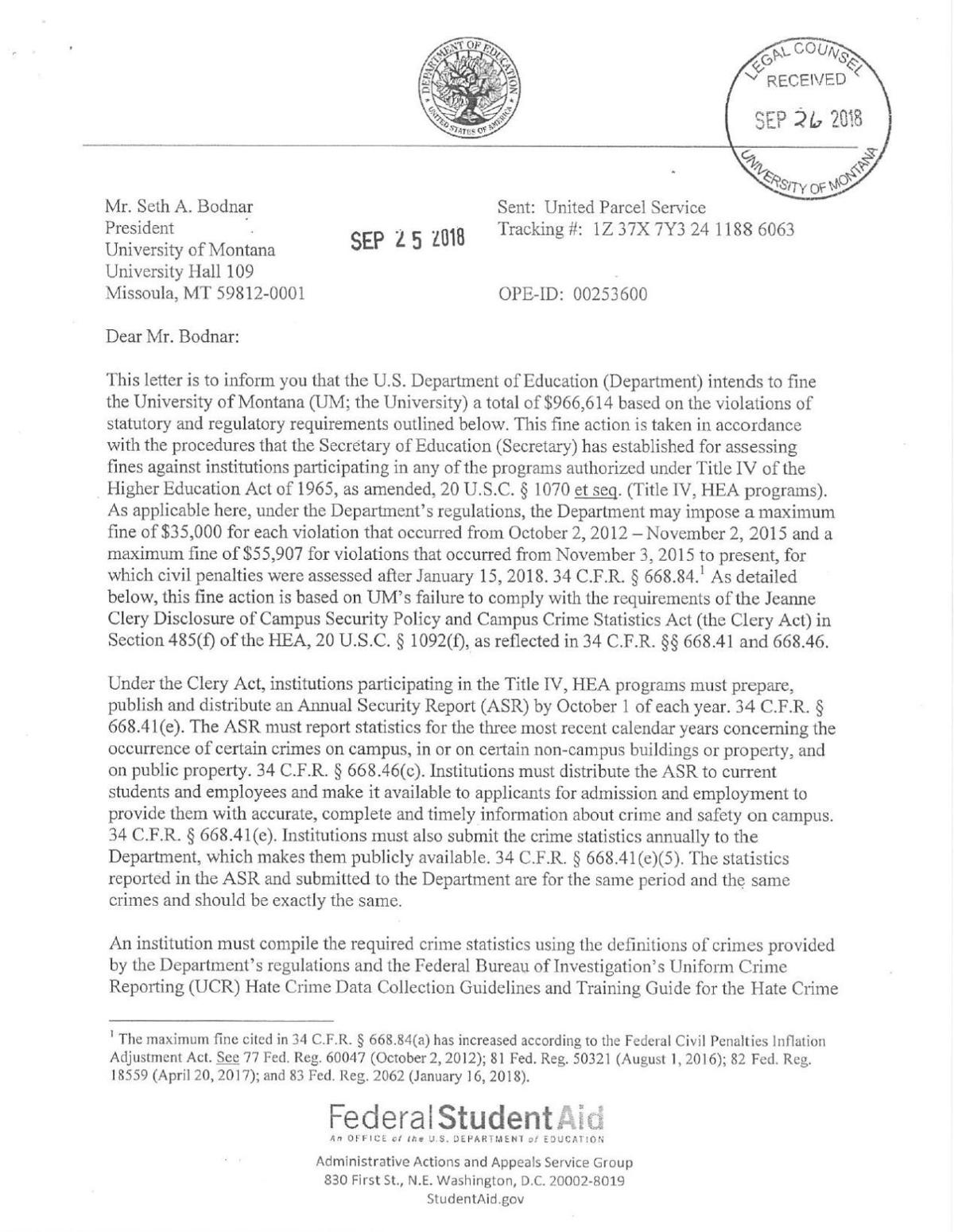 The Jeanne Clery Act is named for a college woman who was raped and murdered in her college dormitory in 1986, according to the Clery Center. Her parents, Connie and Howard Clery, lobbied for policy changes that became that law, and they helped form the Clery Center, a nonprofit with a mission to help prevent campus violence.

Laura Egan, senior director of programs at the center, said the federal reviews may appear to be punitive, but there always will be a need for oversight and enforcement. And she said the point of the review is simply to check up on a campus.

"Without that kind of oversight, there is no check and balance to make sure campuses are doing what they are supposed to be doing," Egan said.

She also said the reviews inform trainers of areas in which campuses may need more education, and it is valuable to translate lessons from one evaluation to other schools.

In 2016, the department announced an “historic” fine of nearly $2.4 million against Penn State, which experienced a high-profile sexual abuse scandal. At the time, the department noted the previous highest fine was $357,500 in 2007 against Eastern Michigan University.

However, the department also has levied $55,000 fines, for instance. A 2014 report from Inside Higher Ed notes the average fine reduction for campuses that successfully sought them was more than 25 percent, although in some cases, the department does not budge.

At UM, Short said the campus anticipated a fine, but did not expect the fine to be as large as it is. She said she hopes the department might consider a reduction based in part on some of the efforts UM has made to improve Clery compliance.

At the same time, communications vice president Cathy Cole said the Clery Act is a benefit to universities. She said it helps those on campus remember they give students a great education by keeping them safe.

"Those of us in education appreciate it as a federal guideline," Cole said.