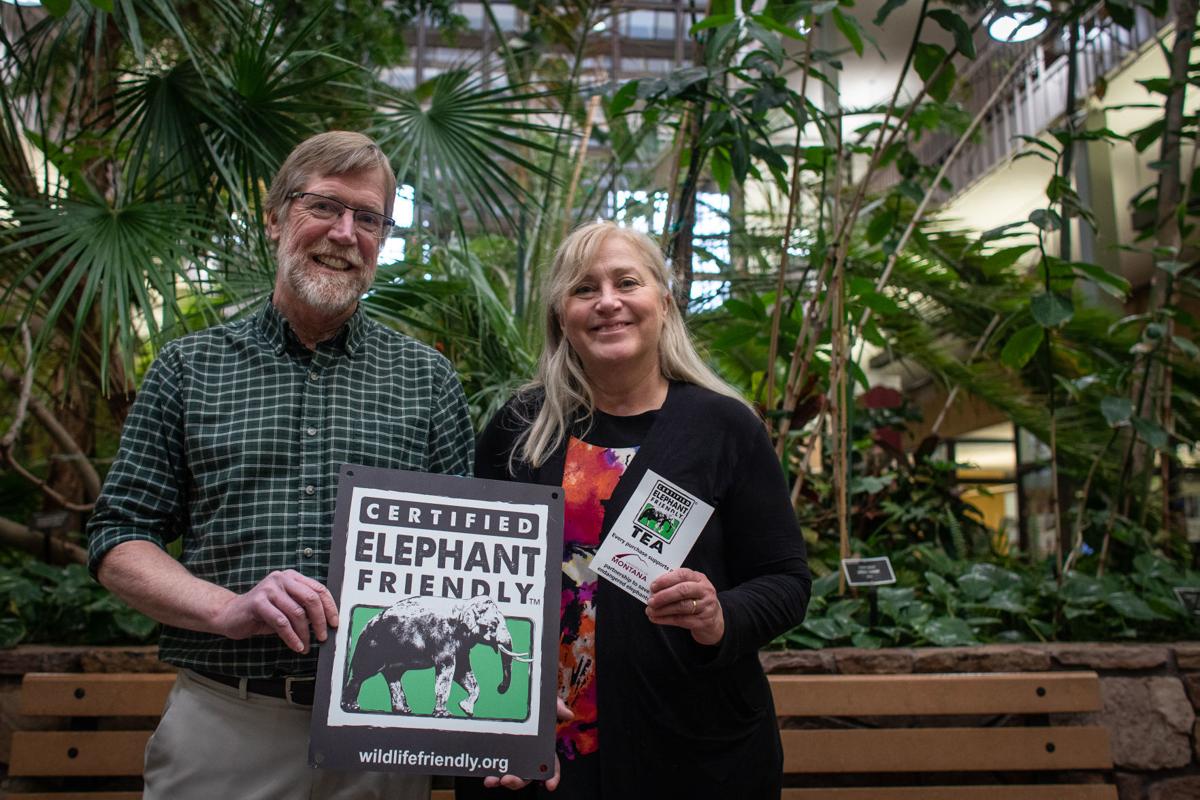 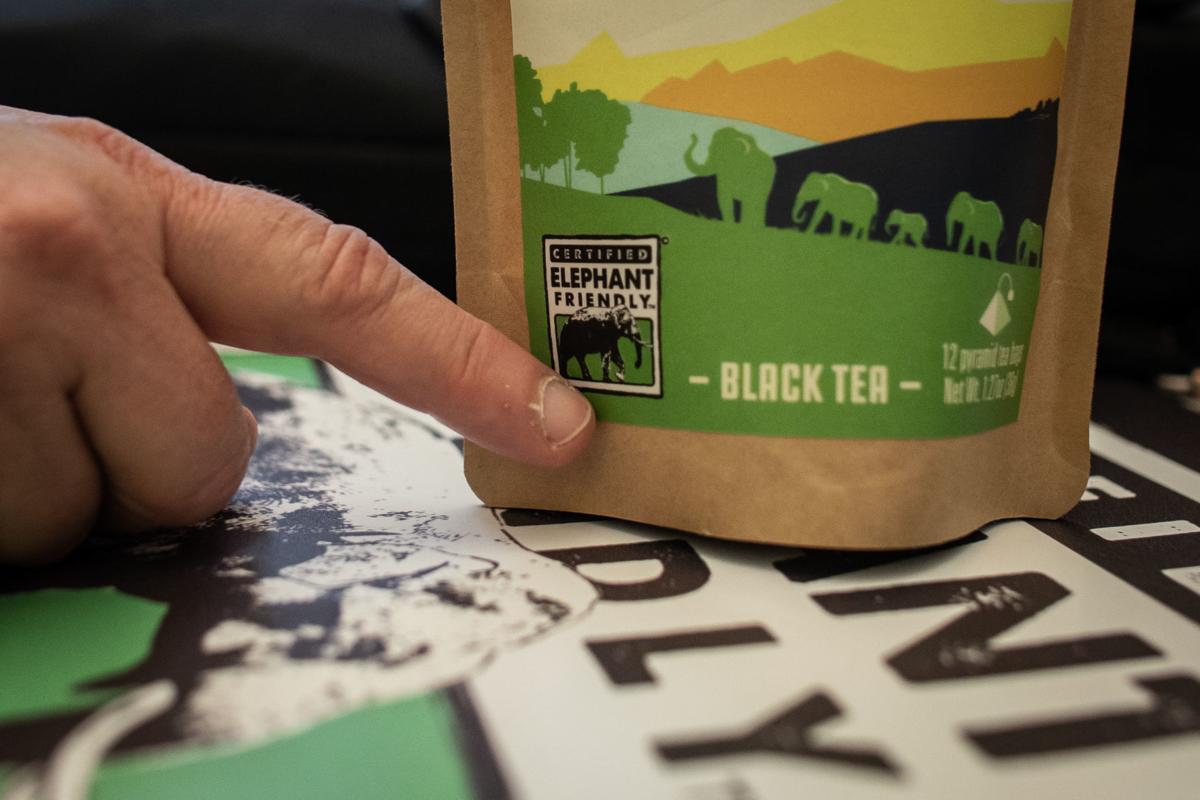 Lisa Mills points to the project's certification label on a package of black tea.

Thanks to the work of one University of Montana power couple, tea drinkers in Missoula and around the world can more easily know if the tea they’re drinking helped keep Asian elephants alive.

With 70 percent of India’s Asian elephant habitat overlapping with tea estates, managing the farms that produce the second most popular beverage in the world in a way that protects elephants has the potential to make a huge impact on the endangered species. Only water is more popular than tea.

Lisa Mills manages the UM Broader Impacts Group’s wildlife conservation and enterprise program, and has been spending several weeks each year working on the ground with tea growers in India to develop the program.

After joining her husband, Scott, a wildlife biology professor, on a sabbatical in Bhutan in 2010, the couple became interested in working on elephant conservation. Lisa, who has worked in education, began working with local people to develop lesson plans for teaching conservation in schools, but quickly realized that wouldn’t be enough.

“After watching young people chasing after elephants and throwing rocks, I realized it’s much more than just preparing lesson plans with teachers, you have to figure out what’s going on that would make them do that,” she said. “So we gave out cameras and taught them how to tell the story of what was going on through photography and GPS units to track what was happening.”

Among the things they documented were baby elephants dying in irrigation ditches, electric wires shocking elephants to death, and agrochemicals poisoning the elephants, as well as human-elephant conflicts causing both humans and elephants to be killed.

Scott pointed to employing locals to record the data as not only essential to developing the science-backed standards, but to forming relationships with the farmers that ultimately need to implement changes.

“The role Lisa’s taken is actually pretty unconventional,” he said. “A lot of conservation efforts come from big organizations that come in and talk to directors, government people, academics, and implementing anything is top-down, pushing down. What she’s been doing is gaining trust on the ground. So she built this by talking to tribal people, community growers, everyone from the tea pickers to various people in the villages. She built it from the bottom up, and I think that’s the reason for its success.”

The couple worked with the Wildlife Friendly Enterprise Network to develop the labeling standards, and already the elephant-friendly teas are available in Missoula at the Good Food Store, UC Market, Lake Missoula Tea Company, Butterfly Herbs and Rattlesnake Market.

With two large tea estates and two small farms under review, and more in the beginning stages of becoming certified, the teas could soon be much more widely available.

Scott said the backing of UM’s host of conservation-minded scientists was essential in developing standards that were forward thinking, rather than just trying to stop tea from being grown in elephant habitat.

“Instead of just saying there’s a conservation catastrophe, we spend a lot of time at UM thinking about solutions and how do we make it evidence-based to show how it feeds back directly into improving conditions for wild animal populations,” he said.  “We’ve often thought about conservation as, to do it, you have to shut down business or you need to build a fence around it, in kind of a simple caricature of conservation. But thinking about how one of the major industries can actually work to save the Asian elephants is transformative.”

The Missoula Family YMCA, a nonprofit gym and activity center at 3000 South Russell Street in Missoula, will kick off its 2020 Annual Support Campaign on Wednesday, Jan. 29, with a goal of raising $300,000 by Wednesday, March 12.

SCHEELS All Sports to open 110,000-square-foot location at Southgate Mall in 2021

The whole goal of the expansion is to open more family-friendly terrain and perhaps disburse the crowds on the steeper parts of the rest of the mountain.

Some Chinese students at UM are left wondering how a trip home might be complicated by the viral outbreak, which has prompted travel bans, flights cancellations and quarantines.

Lisa Mills points to the project's certification label on a package of black tea.