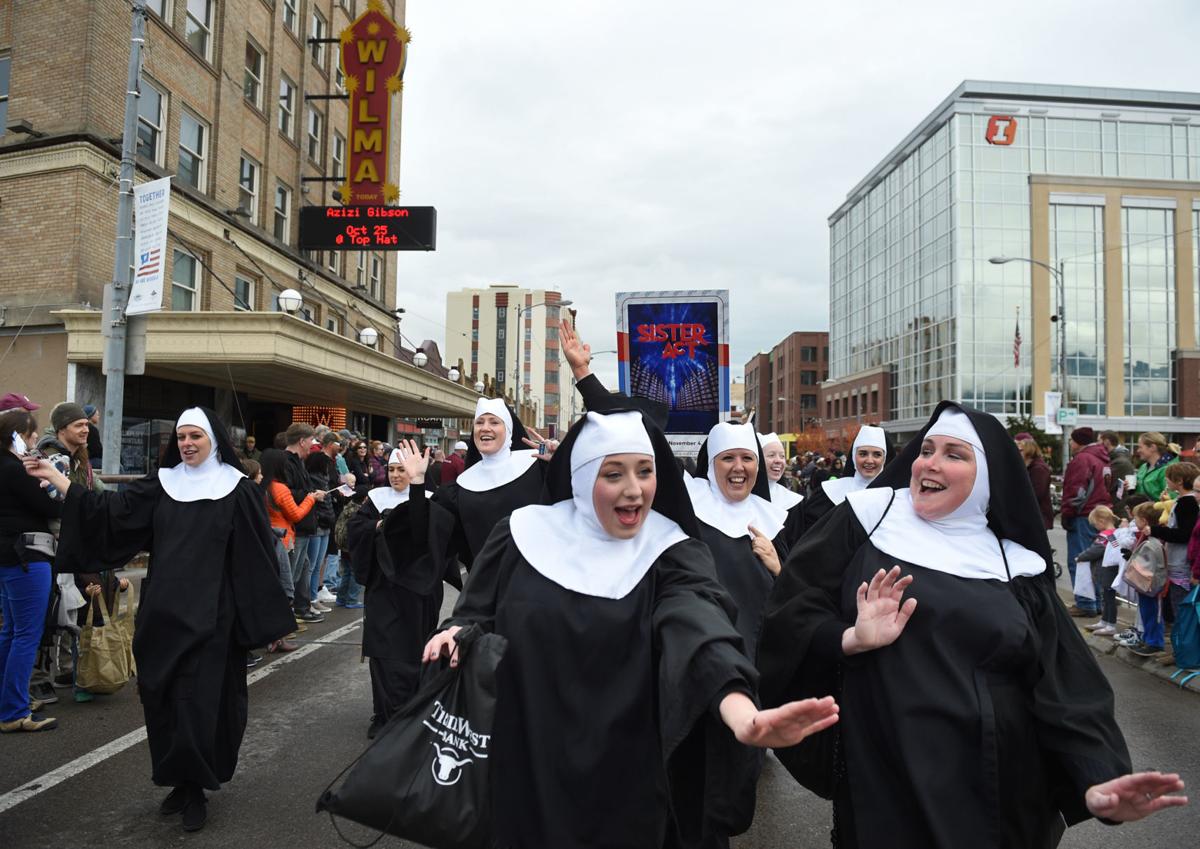 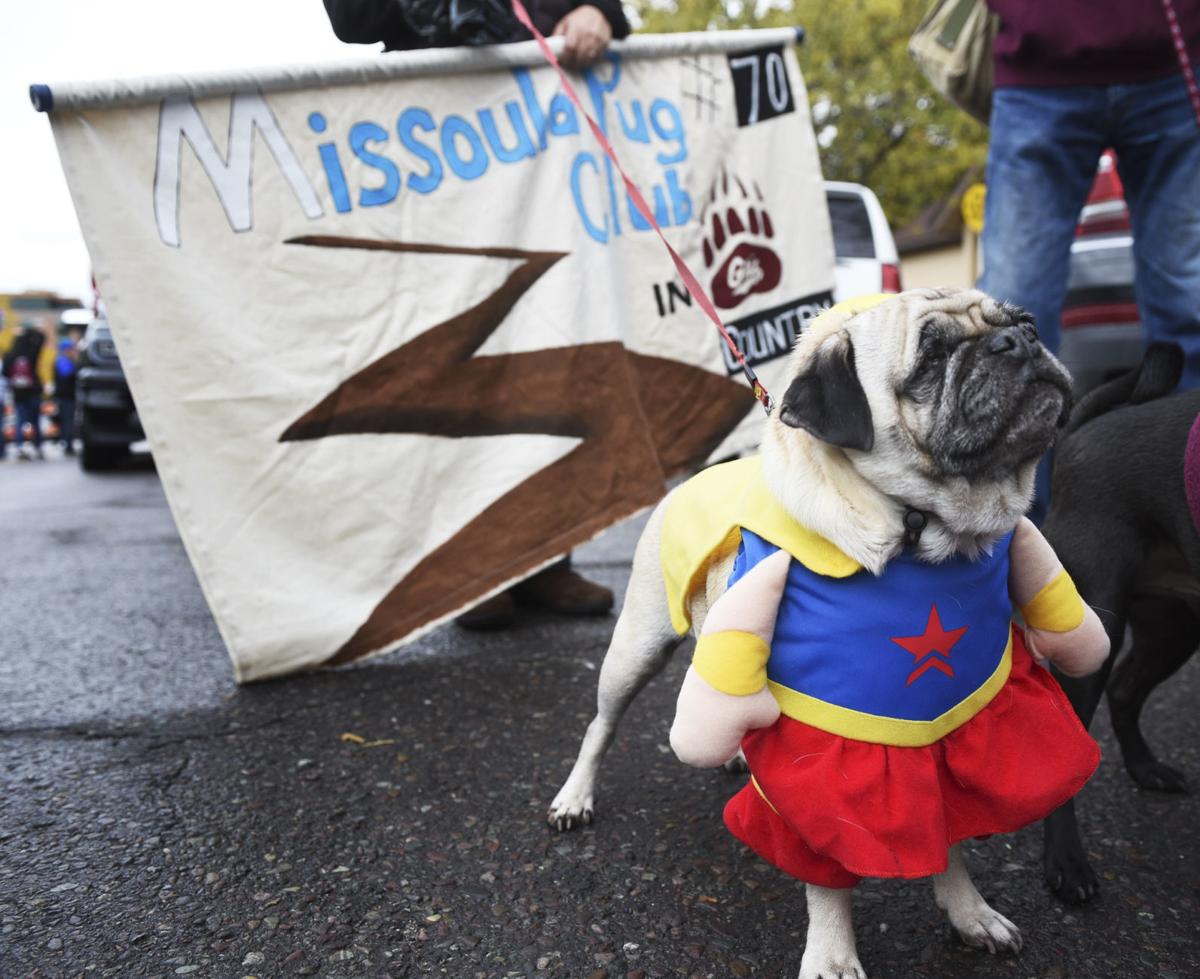 Winky "the one-eyed wonder pug" and member of the Missoula Pug Club poses for a portrait before the start of the homecoming parade. 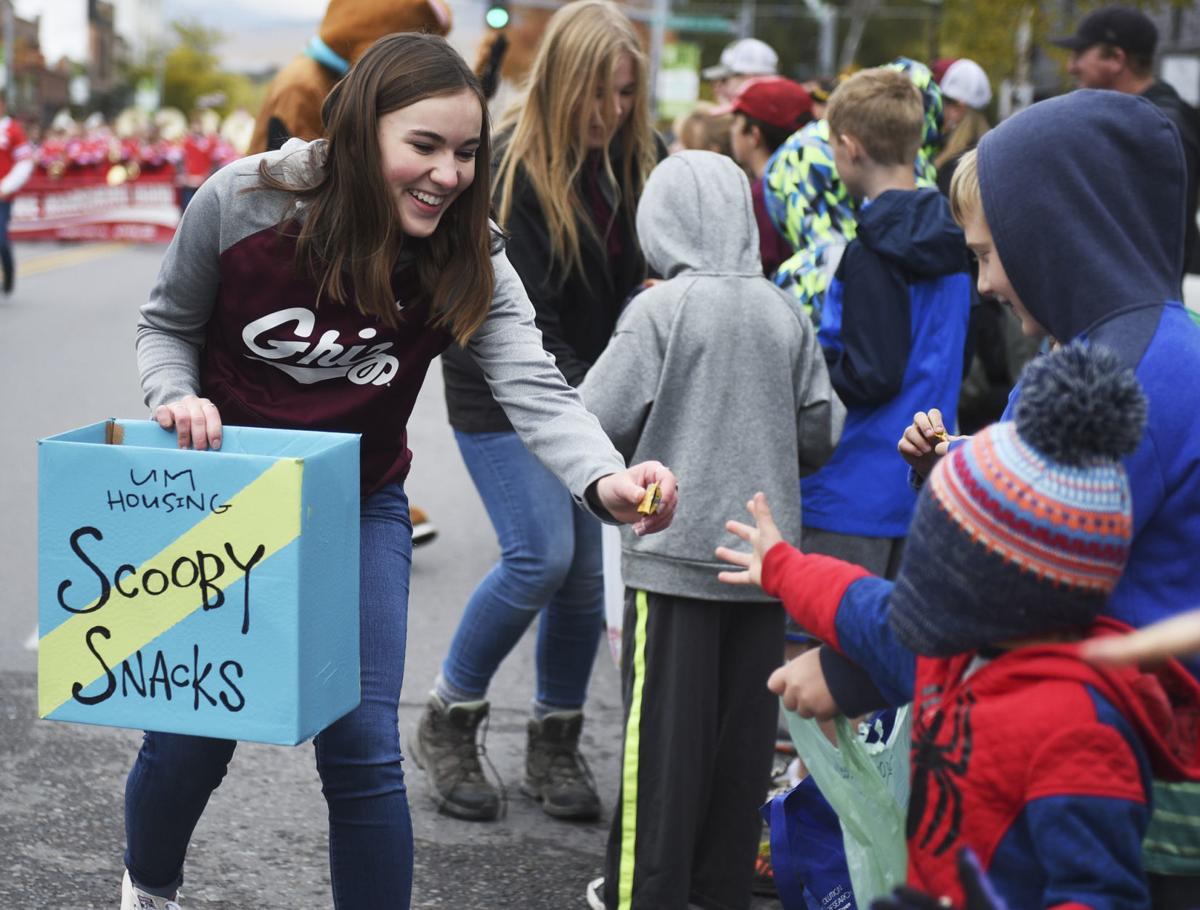 Tianna Leitch hands out candy from a Scooby Snacks box during the annual homecoming parade. The UM Housing Office built a Scooby-Doo-themed float for the parade complete with ghosts and the famous four-person crew.

The drum roll of numerous marching bands carried through the streets of downtown Missoula as community members of all ages lined up to march in the University of Montana homecoming parade on Saturday.

Numerous student organizations, marching bands and community groups gathered with floats, banners and bags of candy as they waited for the parade to begin.

Among the floats was a Scooby-Doo-themed creation featuring a haunted house and a van painted as The Mystery Machine. The float was an all-out effort by UM Housing staff and students who dressed up as the iconic Mystery, Inc., members and ghosts.

Jerome Steen, a painter for UM Housing and the visionary behind the float, said they decided to go with the Scooby-Doo theme because they already had the Mystery Machine van.

“It was a vehicle that the university was going to get rid of so then we decided 'well, let’s keep it and paint it and use it for when students arrive for the fall season,'" Steen said.

The elaborate haunted house construction included shuttered windows that opened and closed to reveal ghosts, a barren tree with crow props and tattered mossy shingles they reused from a previous construction project. Some members of the group carried candy in boxes decorated to look like Scooby Snacks.

The float was a collaboration among UM Housing employees that showcased their line of work.

“It’s to represent each of the crafts, so we have painters holding paint brushes, plumbers will have plumbing stuff, carpenters, electricians, things like that,” said Kari Neal, a UM Housing facility technician dressed as Daphne wearing a purple dress, an orange wig, a green scarf tied in a knot around her neck and roller skates.

A sign reading “UM Housing is Montana Strong” in the classic Scooby-Doo green and aqua colors hung on the side of the float to go with the overall theme of the parade, “Montana Strong.”

Around the corner, the Missoula Pug Club proved that elaborate floats aren’t the only way to be a crowd favorite.

“You can hear the Pug Club coming down the street 'cause people start screaming,” said Heather McDonald, a proud pug owner. To go with the “Montana Strong” theme, several of the dog owners dressed their furry friends in superhero costumes.

Pak created the Pug Club when she got a pug and wanted it to have play dates with other dogs. She said they have been part of the parade for about 10 years.

While floats and pounds of candy accompanied many groups, the Pug Club proved that showing up and being part of the community is the main reason many come to the parade. Although, Pak admitted that she is a bit biased. “We are the reason people come to the parade,” she said.

Homecoming parade celebrates past and future of UM

Despite temperatures barely clipping into the forties, thousands of Missoulians and visiting alumni lined Higgins Avenue Saturday for the Univ…

University of Montana enrollment VP: 'We're going to get it right'

The University of Montana spends a bit more money to recruit than other institutions of a similar size, $659 per student compared to $623, acc…

Women of all ages come together for Diva Day 5K

Women wearing tutus, luau skirts and flower leis paired with leggings and sneakers filled the parking lot of Community Medical Center as they …

Winky "the one-eyed wonder pug" and member of the Missoula Pug Club poses for a portrait before the start of the homecoming parade.

Tianna Leitch hands out candy from a Scooby Snacks box during the annual homecoming parade. The UM Housing Office built a Scooby-Doo-themed float for the parade complete with ghosts and the famous four-person crew.