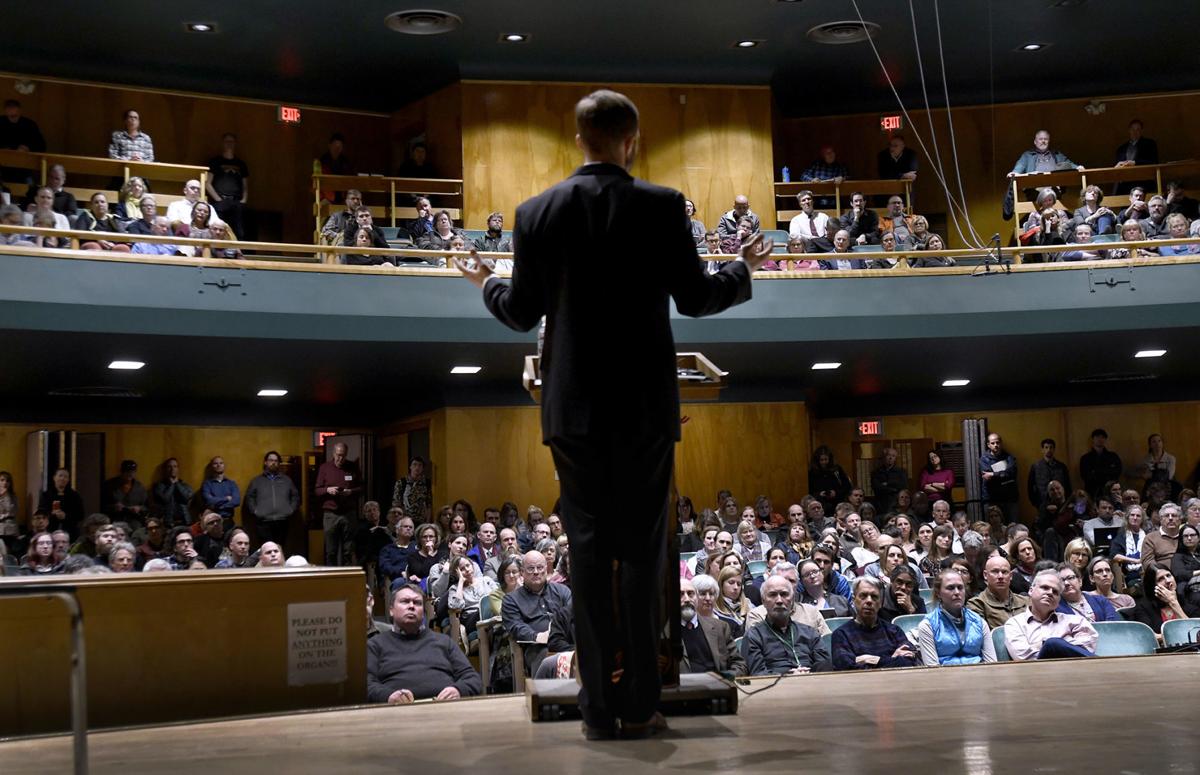 University of Montana President Seth Bodnar addresses a crowd of faculty members Tuesday afternoon in the Music Recital Hall to outline his recommendations for what he calls a "Strategy for Distinction," to reorganize the school, reducing 50 faculty positions over the next three years, and put the university on a financially sustainable course. 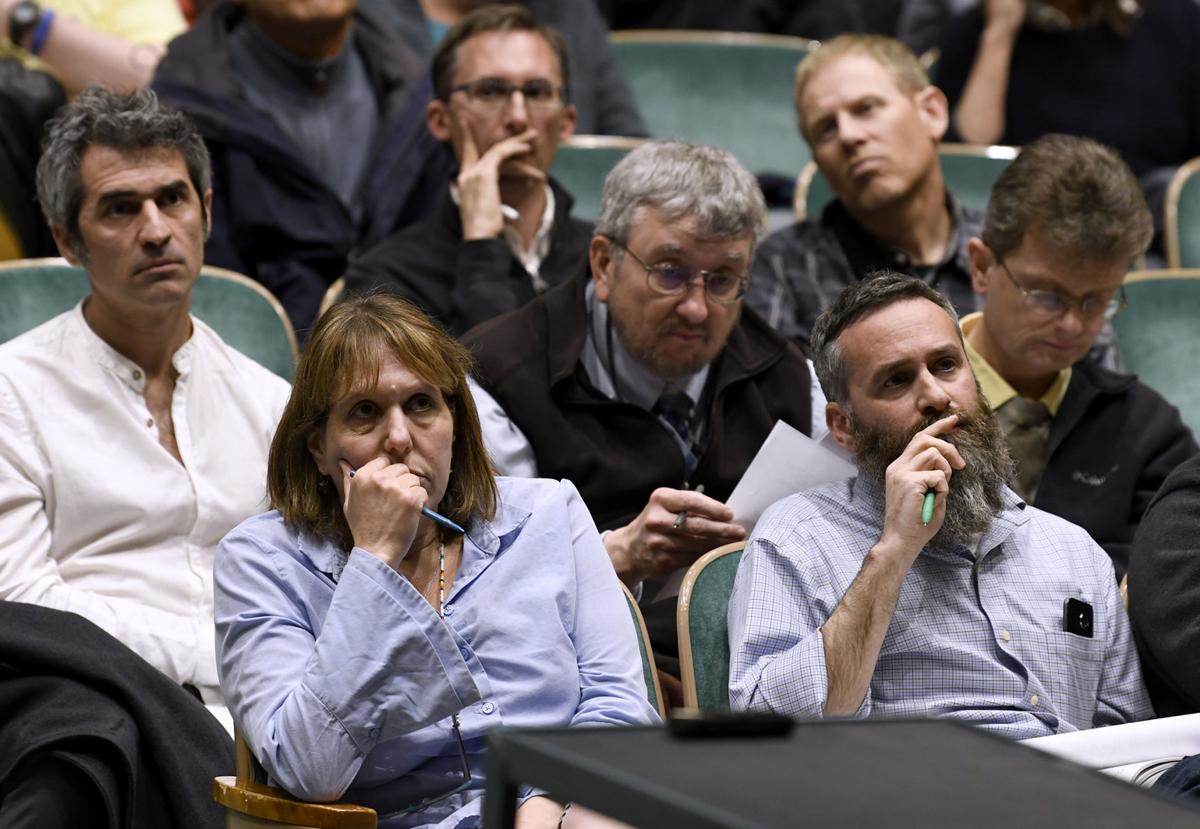 Members of the university faculty senate listen as Bodnar discusses the draft proposal for the reorganization.

University of Montana President Seth Bodnar addresses a crowd of faculty members Tuesday afternoon in the Music Recital Hall to outline his recommendations for what he calls a "Strategy for Distinction," to reorganize the school, reducing 50 faculty positions over the next three years, and put the university on a financially sustainable course.

Members of the university faculty senate listen as Bodnar discusses the draft proposal for the reorganization.

The University of Montana released Tuesday a "Strategy for Distinction" that outlines potential cuts, and aims to put the flagship on a financially sustainable course.

UM President Seth Bodnar stressed that the university will ensure students who are already enrolled will have paths to graduation, one reason the final plan will come to reality over the course of three years.

"These aren't easy decisions," Bodnar said. "But these are decisions that we as a university community have to make in the best interest of our students."

The preliminary recommendations call for cuts of an estimated 50 faculty over the course of three years. In October 2017, UM counted some 600 full-time faculty and 200 non-tenurable/part-time faculty.

Bodnar said he believes the plan will address roughly $5 million of UM's $10 million budget deficit. He said a large proportion of the reductions will take place via attrition with retirements and other departures. However, he also said UM will use curtailment as necessary to cut tenured faculty if attrition doesn't hit budget targets.

"We must set a course that builds on our strengths, ensures our distinction, and provides the resources necessary to sustain quality. As stewards of the University of Montana, we must deliberately design our path forward, creating a strategy for distinction that enhances key areas of strength and future opportunity," Bodnar said in the document.

The president shared the proposal online Tuesday morning and presented it in detail in the afternoon to the Faculty Senate, and he also took questions from media about the preliminary recommendations.

UM is soliciting feedback on the draft proposal and aims to submit a revised plan to the Montana Board of Regents for its May meeting. But Bodnar said the plan he will present to the regents will not include cuts because UM has not reached that point.

The proposal outlines specific recommendations for program reorganizations, and Bodnar offered examples of instances he saw as opportunities for UM to deliver education in a new way and also employ a more interdisciplinary approach.

He offered an example of how UM will be more efficient in order to serve students. As proposed, students will learn languages differently at UM, for instance. The proposal calls for eliminating specific majors in specific languages, and instead consolidating language studies into two majors, Asian studies and European studies, Bodnar said.

The proposal noted a 44 percent drop in degrees awarded across all languages (the time period wasn't immediately clear).

To offer language learning in the future, the president said he's charging UM teams with exploring how the campus can use a combination of in-person training, immersion training and distance and online learning to give students "a re-imagined opportunity" in languages.

"Frankly, I think this is an area where the University of Montana can serve the rest of the state," Bodnar said.

He also said recommendations for reorganization will help UM be more interdisciplinary. For example, the draft recommends collaboration among computer science, math, economics and the College of Business to develop more fully a cross-college data science initiative. It proposes a division of mathematical sciences, economical and computational sciences, and a redesign of economics, possibly as part of a master's in data science.

"You'll see in these recommendations a charge to the group to look at (UM's) data science initiative in a much deeper way," Bodnar said.

Incoming Provost Jon Harbor said he was drawn to the interdisciplinary efforts at UM. The biggest problems faced in the world today will be solved by teams of people with a wide range of experience, and he said the proposal positions UM to be a leader in its "communities of excellence."

"I'm very excited by the emphasis on interdisciplinary initiatives here. That's one of the things that attracted me to this job," said Harbor, who will officially start in August.

President Bodnar also shared an example of how UM plans to use technology to spend less time on administration and therefore more on students. Currently, he said it's cumbersome to deal with travel and travel expenses, and if UM can simplify and modernize its system, it will have more time to spend helping students.

UM has experienced an estimated 30 percent enrollment slide since 2010, and previous presidents also have made budget cuts to handle the corresponding drop in revenue. Bodnar took the helm of UM in January.

In the past, calls for faculty cuts in specific areas have elicited outcry, but Bodnar said he's prepared to follow through on the plan — once shaped by feedback — for the good of the school's top priority, its students.

"I look forward to transparent and honest, sometimes difficult conversations with our faculty members to make sure we best serve the needs of our students," Bodnar said.

"The University of Montana’s mission is to provide a high-quality and accessible education at a worldclass research university. We shape global citizens who are creative and agile learners prepared to build and sustain communities. As Montana’s flagship university, we lead conversations that question and expand the frontiers of knowledge to tackle the world’s most complex challenges."

The preliminary recommendations for reductions include the following:

• 6 FTE (full-time equivalent positions) in English, 2 in history, 7.5 in modern and classical languages and literature, and 1 in political science

• 2 FTE in anthropology, 1 in psychology, and 1 in communication studies and composition

• 3 FTE in global humanities and religions, 1 in environmental studies, 1 in geography, 1 in philosophy

• 1 FTE in educational leadership and 1 in elementary education

• 1 FTE in forest management and 1 in resource conservation

• 3 FTE in mathematics, 2 in geosciences, 2 in chemistry/biochemistry, 1 in economics

The draft proposal also outlines administrative changes such as replacing 23 department heads in the College of Humanities and Sciences with 10 division/department heads.

UM will hold these additional sessions to gather feedback:

• April 20, 4 p.m., in SS 352, the president and members of the University Planning Committee will hold a campus forum for all employees.

Chelsea Elander, the spouse of University of Montana President Seth Bodnar, has been playing a significant role in the flagship's preparation …