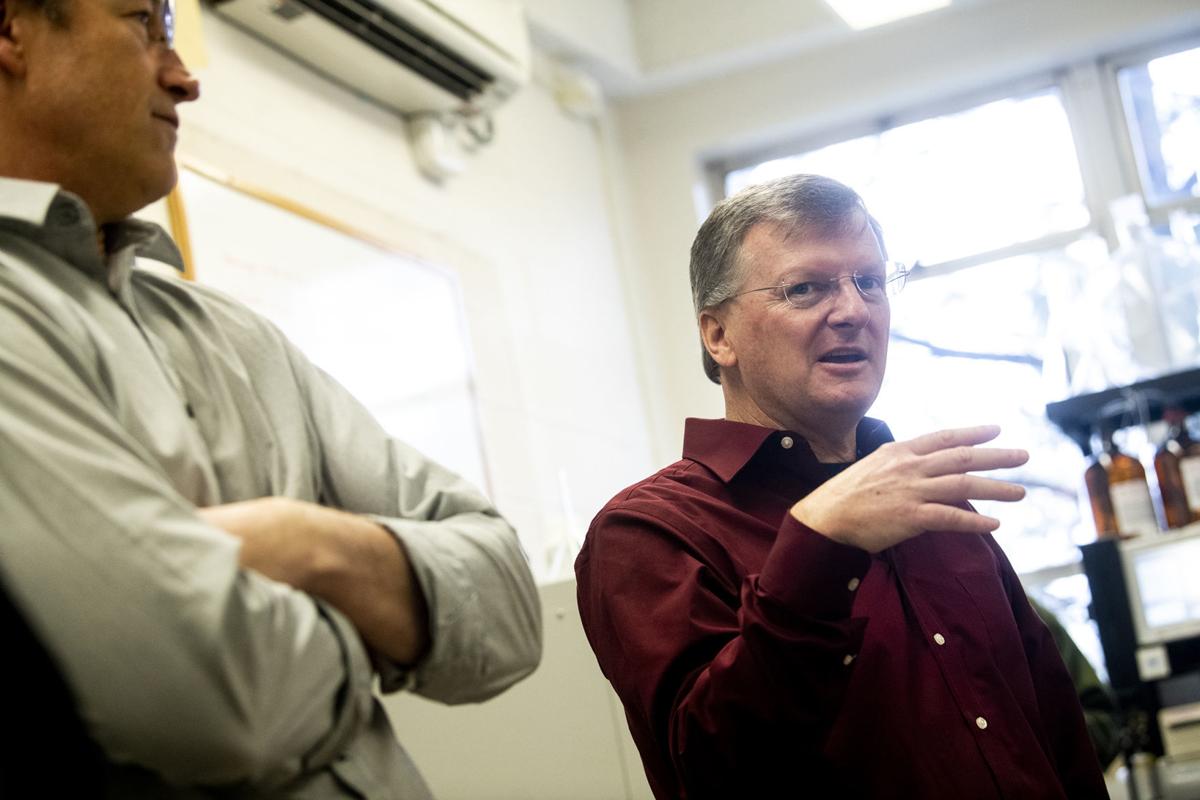 Jay Evans, a research professor in UM's Division of Biological Sciences, leads the Center for Translational Medicine in the quest for a vaccine. Evans' team consisted of 15 people at its inception in 2016 and has since grown to 40. 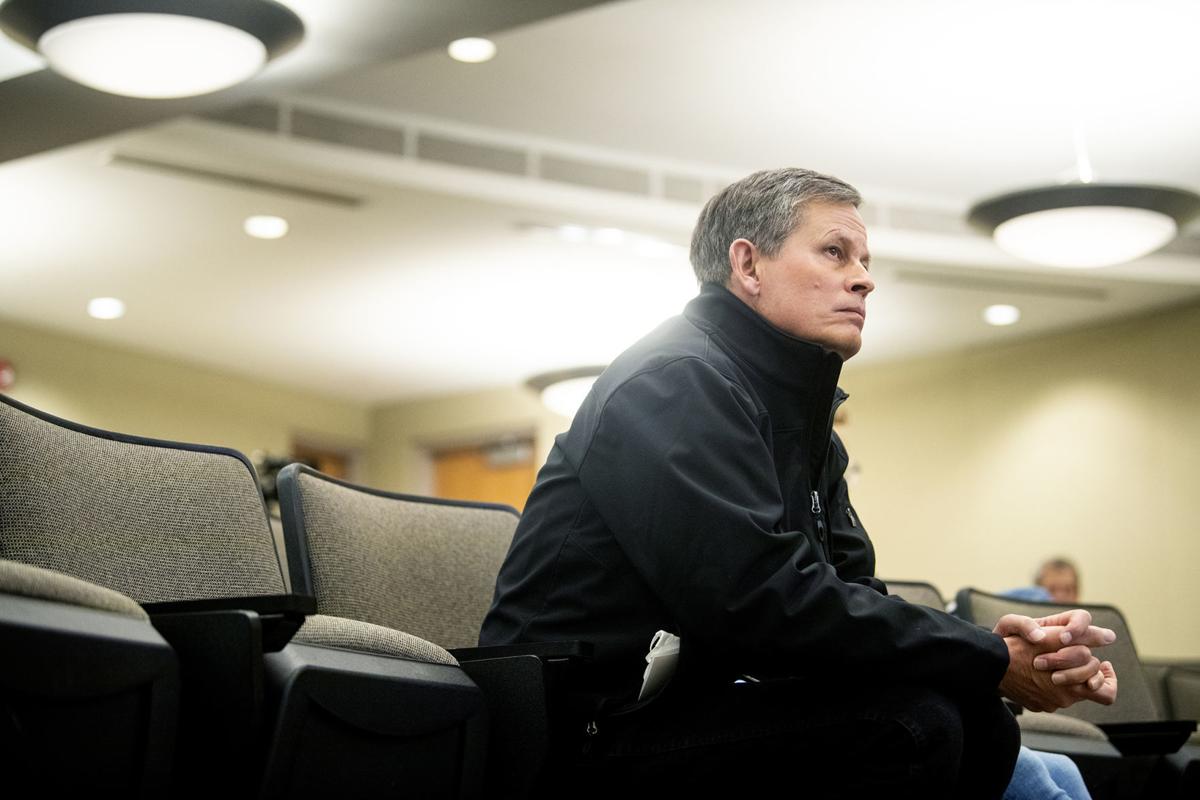 Sen. Steve Daines discussed with UM President Seth Bodnar and Jay Evans the possibility of expanding funding for biotech and vaccine research facilities at the university.

Researchers at the University of Montana are working to develop a COVID-19 vaccine with the help of a $2.5 million grant from the National Institutes of Health.

The University of Montana has become a leader in vaccine development, ever since a team led by Jay Evans joined UM in 2016, after pharmaceutical giant GlaxoSmithKline downsized its operations in Hamilton, and the research team moved to Missoula.

Evans and his team at UM’s Center for Translational Medicine began working on the vaccine after being contacted by the NIH in February, prompting them to get to work on COVID-19 research while the federal grant process worked through the pipeline.

"It’s seed money in a way," Evans said. "This allows us to generate the data we need from these lead vaccine candidates, and once we get that data and prove which vaccine is the best, then six months from now we’ll be able to put in for a larger funding request, likely one of these $10 (million) to $15 million requests that allows us to take the lead candidates through Phase 1 trials."

Evans’ team has specialized in the development of adjuvants, chemicals that help vaccines work more effectively and safely, which has made the team one of the leaders in that field, and likely one of the reasons the NIH reached out directly to UM for the project.

The team of researchers encompasses multiple UM departments, including the chemistry, biological sciences, and biomedical departments. The work is also being done in partnership with the Icahn School of Medicine at Mount Sinai in New York City, as well as researchers at Boston Children's Hospital.

Some animal testing, on mice, at UM is already underway with the lab’s initial vaccine candidate findings, but further animal testing will be done at Mount Sinai on mice, and eventually on pigs at another facility in Canada.

In conjunction with the grant announcement Thursday, U.S. Sen. Steve Daines visited the University of Montana to hear about the work being done. During his visit, UM President Seth Bodnar, as well as Evans and others, called on Daines to help them find more funding to expand the biotech and vaccine research facilities at UM, which they said were quickly becoming too small for the work being done there.

Evans' team consisted of 15 people when it first began in 2016, but now is up to 40, and has brought in nearly $70 million in vaccine research grants. The team has worked on or is currently working on influenza, whooping cough and Lyme disease, as well as opioid addiction. However, with limited space and facilities, the 40-person team works in a space built for 25, and much of the millions awarded to UM simply passes through to other public and private labs outside Montana that have more technical facilities.

Bodnar said if more of that funding could stay at UM, that would mean more good-paying jobs for Montanans, as well as more high-level experience for students working in the labs.

In a presentation for Daines, who said he had worked to include $10 billion in increased funding for the federal Biomedical Advanced Research and Development Authority in the Senate's coronavirus response bill, Evans laid out future developments he hoped UM could find ways to fund.

Among them was a new building at UM designed for biotech research and laboratories that could work with large animals, such as live pigs, whose immune systems — as opposed to those of mice — much more closely resemble those of humans. Additionally, MonTEC, Missoula's biotech incubator space, was already at capacity, limiting the growth in biotech companies Missoula has seen in recent years.

Due to the shortage of available biotech research space at UM, Vice President of Research and Creative Scholarship Scott Whittenburg said probably a third of the funding that the Center for Translational Medicine receives has to be subcontracted out of state, meaning millions of dollars in lost economic opportunity for the state.

If UM is successful in developing the best adjuvants found for the vaccine, the university then owns a share of intellectual property, meaning it could receive money from the sale and use of the vaccine if it is eventually scaled up.

With the improved facilities, Evans said he could see more clinical trials, and even manufacturing of the vaccine components, happening in Missoula.

The race to find a vaccine for the pandemic COVID-19 has led to an unprecedented level of research and collaboration between both public and private companies. Evans concurred with federal officials who have said a vaccine is possible within a year to 18 months. However, the mumps vaccine, developed in the 1960s and considered to be the most quickly approved vaccine in history, took four years to develop. But UM is just one of many universities working quickly toward finding a viable vaccine.

"There's a lot of resources that have been redirected toward this," Evans said. "On the adjuvant side, which is our specialty, we're probably the leaders, which is a differentiator for us at UM."

Local officials on Wednesday said they are still digesting Gov. Steve Bullock's plan to reopen parts of the state, while businesses say they are cautiously considering options and minding public health needs.

The man police say shot his own car multiple times with a rifle on East Beckwith Avenue last week has been charged with two felonies.

In 2017, an estimated 2.1 million Americans suffered from an opioid use disorder. A research team at the University of Montana aims to keep th…

Missoula County and other local governments are still determining how to ease COVID-19 restrictions.

State attorneys this week urged a District Court judge to reject a group's proposal to gather signatures for a recreational marijuana ballot initiative through electronic means.

'Not out of the woods': Montana medical expert urges caution

The head of the Montana Medical Association said Friday he supports a gradual reopening of the state while reminding residents to remain vigilant.

The University of Montana is working to trim faculty and class offerings ahead of an uncertain fall semester, with announcements coming as soon as next week on who will be offered a job in the fall.

Missoula County commissioners are asking the state for funding to alleviate $6 million in unbudgeted expenses related to COVID-19.

Well over $70,000 has been raised in donations for students, in addition to millions in aid from the federal CARES Act.

UM graduates reflect on a strange ending to their college career, but with hope for the future

College students nationwide were forced to adapt to the COVID-19 pandemic, but 1,863 degree candidates at UM are officially moving onto the next phase of their lives this Saturday.

Jay Evans, a research professor in UM's Division of Biological Sciences, leads the Center for Translational Medicine in the quest for a vaccine. Evans' team consisted of 15 people at its inception in 2016 and has since grown to 40.

Sen. Steve Daines discussed with UM President Seth Bodnar and Jay Evans the possibility of expanding funding for biotech and vaccine research facilities at the university.