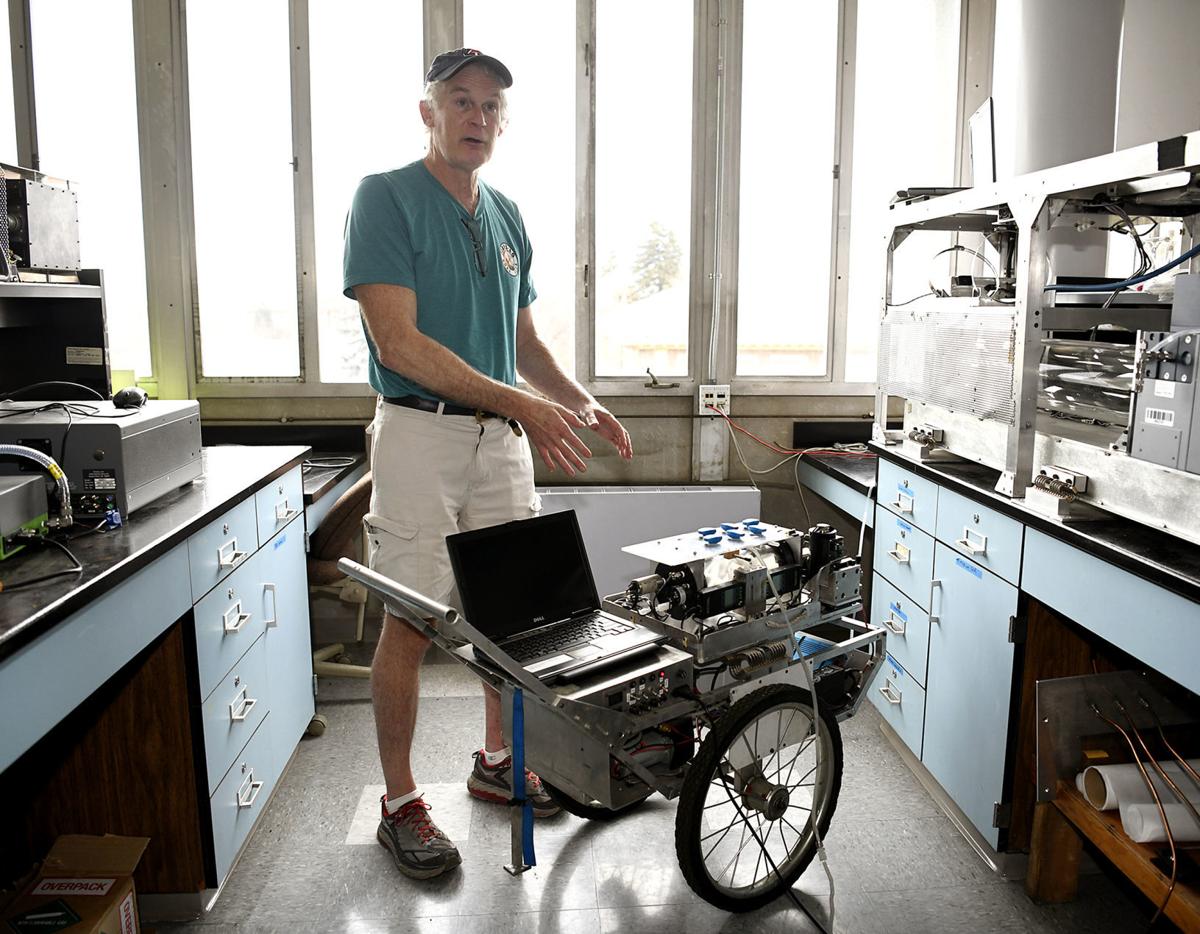 Bob Yokelson, a research professor in the Department of Chemistry and Biochemistry at the University of Montana, stands Thursday with a portable infrared spectrometer with other instruments used to analyze the chemistry of smoke. Yokelson recently made an annual list of the top 1% of most highly cited researchers in the world by the Web of Science Group. 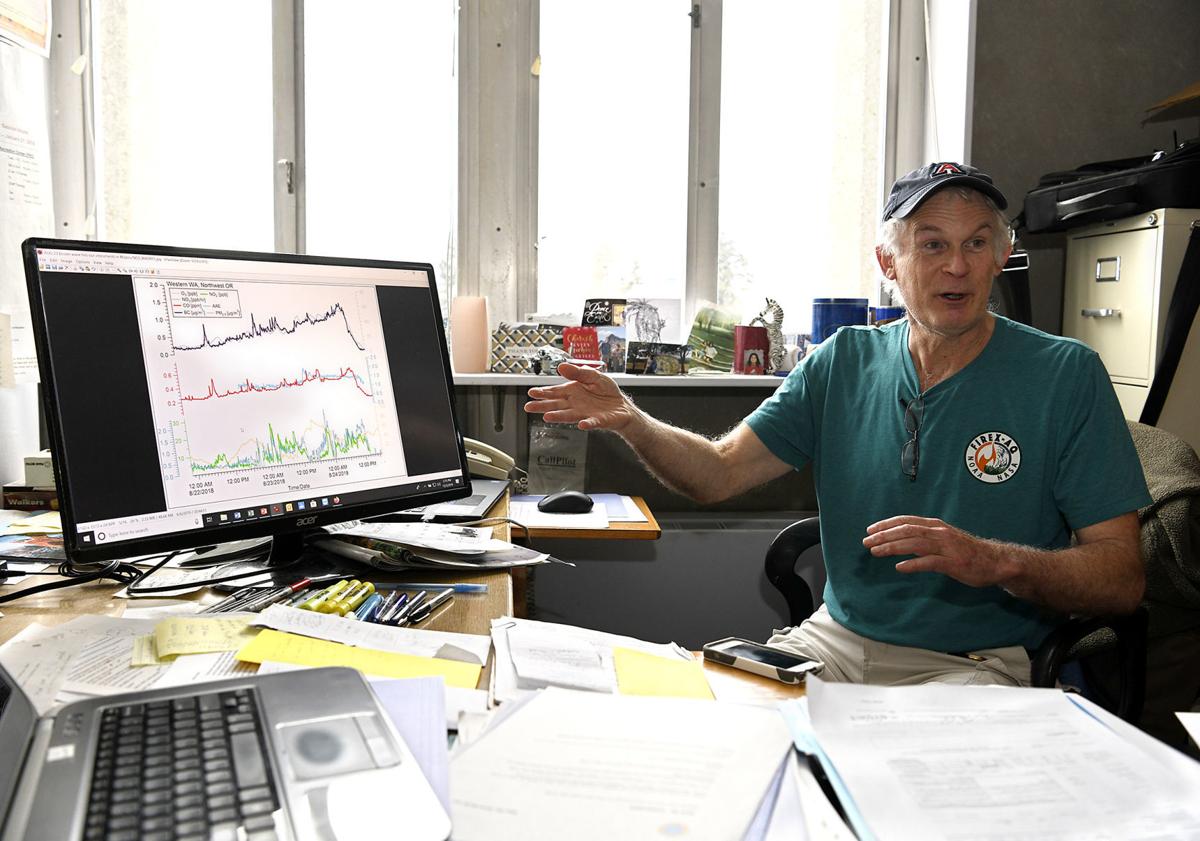 Yokelson studies the chemistry of smoke, and how biomass burning around the world affects the atmosphere.

Bob Yokelson, a research professor in the Department of Chemistry and Biochemistry at the University of Montana, stands Thursday with a portable infrared spectrometer with other instruments used to analyze the chemistry of smoke. Yokelson recently made an annual list of the top 1% of most highly cited researchers in the world by the Web of Science Group.

Yokelson studies the chemistry of smoke, and how biomass burning around the world affects the atmosphere.

Dr. Bob Yokelson has been named one of the most highly cited scientists in the world. When the University of Montana research professor first got the news, he didn’t believe it.

“I got an email, I thought it was spam,” said Yokelson, in UM's chemistry and biochemistry department. “And then I realized, ‘Oh, maybe it’s actually right.'”

A key measure of scientists’ impact is how often they’re cited by other researchers. Each year the Web of Science Group, a company that tracks and analyzes scientific research, lists the top 1% of most-cited researchers across 21 different fields. This year, Yokelson was one of 6,216 researchers worldwide — and the only one in Montana — who made the cut.

On what topic does he provide such sought-after knowledge? Smoke.

Yokelson has been researching its chemistry for over 25 years — and working in it even longer. A job as a firefighter got him interested in forestry, then chemistry. A doctorate followed. When an opportunity arose to work at the University of Montana, he and his then-wife “just thought it was a great opportunity to come back and do something meaningful.”

He calls Missoula a “fire town,” and smoke from late-summer wildfires has long been a fact of life for residents of the Garden City. But when Yokelson arrived at UM in 1993, “there had only been a few types of instruments used to measure what was in smoke.”

That created “an easy, no-brainer, long-term plan for me: I’ll spend the next twenty years constantly bringing in all the latest technology and deploying it on fires.”

Since then, he and his colleagues have analyzed smoke plumes large and small around the world, installing instrumentation outside UM’s Charles H. Clapp Building, placing it on NASA aircraft flying over Western wildfires, even building a portable infrared spectrometer — a wheelbarrow-like apparatus holding an instrument scientists use to determine the contents of a gas — to analyze the soot from cooking fires in remote African villages.

Over the course of his career, smoke has drawn increased notice, as wildfires have grown more intense and urban sprawl has brought more people close to them.

Many of Yokelson’s studies have contributed to atmospheric data sets maintained by the National Center for Atmospheric Research. He surmises this is a reason for his high citation rate. “Now anyone studying fires anywhere on the earth typically uses at least some of our data to start their model,” he said.

Yokelson is quick to share credit, commending his colleagues at UM and suggesting that Web of Science’s criteria may have left out some other scientists with more citations. He also made clear that, when he was out of town during the brutal 2017 fire season, one of his graduate students, Vanessa Selimovic, set up monitoring in Missoula.

Selimovic also thinks she’s in the right place and right time to study smoke. “I've been pretty lucky I guess, although I don't know if lucky is the right word, but the last couple years we've had smokiness pretty much every year.”

That’s left plenty of work for Yokelson, too. He’s working on new fire modeling, analyzing the data from a recent U.S. government survey of wildfires, and preparing to assess the findings of an ongoing study of peat fires in Indonesia.

It all ends up in the same place, he pointed out, displaying a slide from a presentation he’s given. It’s a photo of the atmosphere taken from the International Space Station: a tight film hugging the curvature of the Earth.

“The atmosphere is a very fragile, thin layer of air that we need to take good care of.”

Get used to it: Fire experts warn summer smoke and flames aren't going away

We may not know how to live with wildfire, but the question won’t go away for lack of answers.