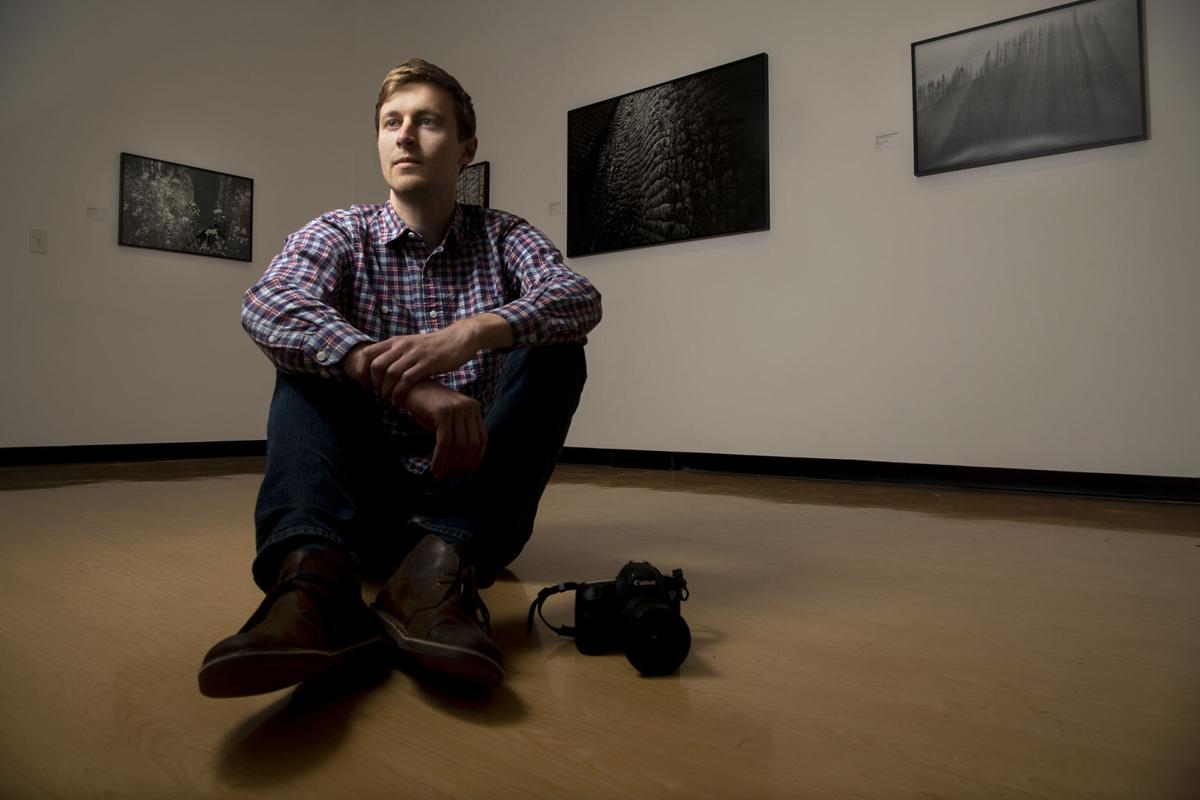 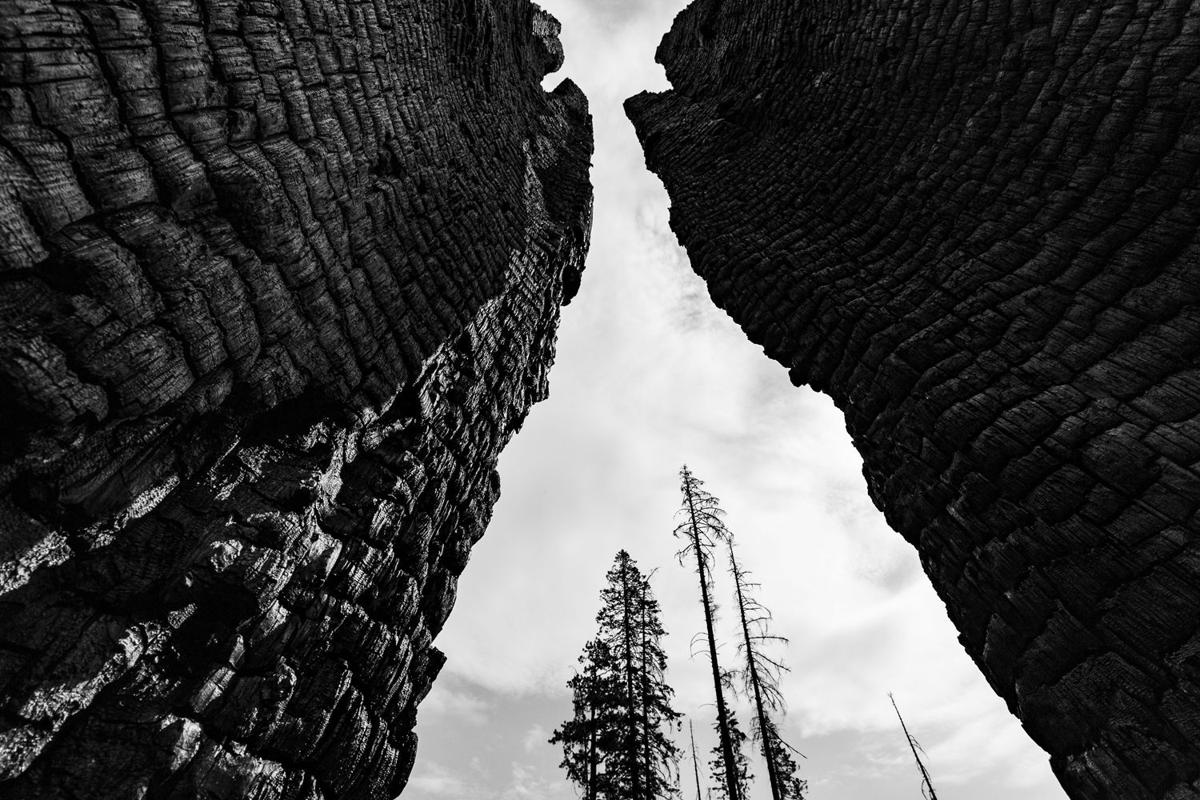 Mark Kreider, a doctoral candidate at the University of Montana, is exhibiting photographs, "Wilderness Fire," in the University Center Gallery this month.

A photography exhibit illuminates the “haunting beauty” in burned forests and wildfires, a feature of the landscape long before humankind.

These blazes are a “force of both destruction and creation and rejuvenation,” laying the path for new growth, said Mark Kreider, a University of Montana Ph.D. student.

Kreider is a doctoral candidate in forest and conservation sciences who grew up in Kansas and developed a love for the woods and mountains in neighboring Colorado. Besides science, he plays classical piano and shoots pictures — part of the reason he went into environmental science was a project in high school where he worked with conservation photographers, which to an 18-year-old seemed like the best job imaginable, because it applied creative expression toward a larger social purpose.

“I thought it was a cool way to kind of mesh lots of different disciplines to achieve a goal,” he said.

His photo exhibit does just that. Besides the images, it was part of a scientific venture, and his gallery has informational posters with background, graphics and wall quotes to provide context for the next time you’re out in the woods.

Last summer, he was headed to the Selway-Bitterroot Wilderness area for a field project co-sponsored by the UM Wilderness Institute to collect data for research on how forests recover after they’ve been burned — whether once, twice or three times in the past 150 years — and the effects of multiple wildfires.

They were based in the Moose Creek Ranger Station on the west side of the Bitterroot Range of the 1.3 million-acre wilderness, exploring an area of about 20 miles around it.

Before the arrival of white people, the Salish, Kootenai and Nez Perce conducted their own forms of stewardship. They would burn out understory to make room for movement or promote the growth of certain plant species that require more light and attract elk and deer, he said.

The area is also home to the site of the first smoke jump, on July 12, 1940. In 1972, the Forest Service decided to allow a lightning strike to burn freely in the White Cap Wilderness Fire Study.

Knowing that it would be a good opportunity, he applied for a creative research scholarship to cover the costs of printing and framing, and went into the season with a photo exhibition in mind.

“I knew I wanted it to be a kind of counter to the traditional narrative of fires as only a thing that is scary, and destroys and ruins things,” he said. It also creates “interesting landscapes, things that are cool to look at, different species that take advantage of the post-fire environment.”

Amanda Barr, the UC Gallery's director, said artists often incorporate science into their work in their exhibitions there, whether they're interested in data or ecology, climate change, biology and anatomy. They're approaching science from the art side, while Kreider is "approaching from the sciences, so it's much more front-facing."

"The attractiveness of Mark's work, the visual appeal of his images, make the science very accessible. Most people think of the hard sciences as unapproachable and dry, but his photos are beautiful and relatable," she said.

The area had a widespread fire season in 2017, but some plots hadn’t had fires since 1934 and 1910. That “fire mosaic” results in a “very diverse and cool landscape compared to some places that haven’t burned in a very long time” and are more homogeneous.

He shot with a Canon 60 DSLR, which was small enough to carry on a chest holster as they worked their way into the field, which entailed bushwhacking off-trail to get to plots.

Partway through the season, he decided to narrow down to shooting in black and white. Besides his admiration for classic landscape photographers like Ansel Adams, there was a practical consideration — the intense wildfires resulted in bad light and “everything took on a bluish, smoky cast.” In some of his pictures, the smoke is still visible, socking in the hillsides, but it has a different quality without color.

Black and white also makes images “an abstraction of reality,” that emphasizes “textures and patterns more than we otherwise would,” he said. That’s particularly noticeable in close-up shots of trees. A burned old growth cedar is represented in close-up, where the ribbons of charred bark are the main event. He also stepped inside snags to shoot outward, so the holes in the tree became windows or, looking upward, rise to the sky like castle ruins.

Besides the aesthetics, he hopes that people learn that “fire is not the enemy,” especially as climate change increases the blazes and smoke that humans will have to live with.

Appleby calls her work “reductive,” rather than minimalist or color field painting.

The holidays are an important time of year for artists, as customers turn out at art markets and holiday sales. Here are some of the big art sales happening around Missoula this season.

Mark Kreider, a doctoral candidate at the University of Montana, is exhibiting photographs, "Wilderness Fire," in the University Center Gallery this month.