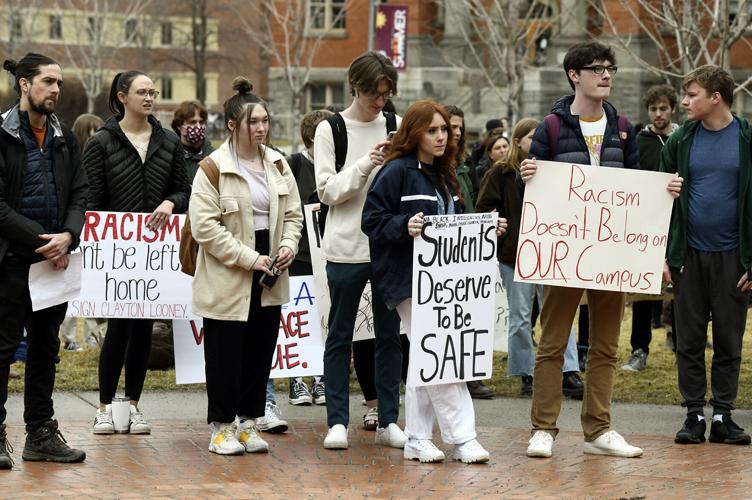 People attend a rally on the University of Montana campus Thursday to call for the removal of professor Clayton Looney for racist text messages. 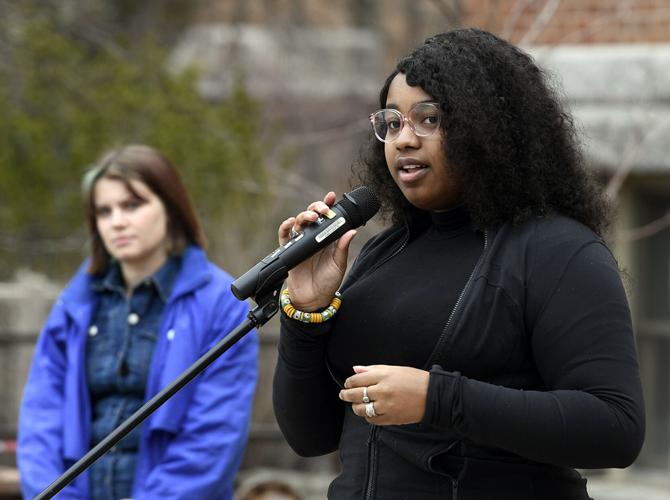 Ajaysia Hill, who has been leading the effort to remove Clayton Looney for racist texts, speaks Thursday at the UM rally.

Nearly 150 people attended a protest Thursday at the University of Montana in front of Main Hall to call for the firing or resignation of a business professor who made racist remarks in private communications.

The protest was the latest of many efforts by UM students to have Clayton Looney removed from his position on campus for using racial slurs against Black people and Muslims, as reported by the Daily Montanan.

The university launched a Title IX investigation into the matter, but deemed it a non-workplace issue earlier this fall.

In the private communications, Looney used the "n" word, made jokes about Muslims wearing "towel wraps," and other racist remarks.

Many of the students at Thursday’s protest expressed their disappointment with the lack of action by the university.

“How much longer do we have to deal with racism, Islamophobia and xenophobia on this campus?” asked Ajaysia Hill, who first brought the matter to campus administrators nearly a year ago. “When will it be serious to you guys?”

“I deserve to feel as safe as everybody else standing here,” she continued later.

Several campus administrators were in attendance, including President Seth Bodnar. Bodnar was invited by students to speak at the protest, and accepted.

He noted that he didn’t intend to speak at the protest, but rather to listen and learn and that when he reads racist comments it makes him very angry and upset.

“It hurts me in a way that I can never understand how it hurts you differently, my lived experience is different, but it makes me angry,” Bodnar said.

The university is taking steps to address issues of racism on campus and promote inclusion, Bodnar said. For the first time in its history, it is creating a diversity equity inclusion plan.

“I want to acknowledge that this focus does start from the top and this is something we care about here, but we also have to learn from it and today for me is about learning more and I want to continue in that process,” Bodnar said.

Throughout his remarks, students batted back and expressed that the university’s response has not been adequate.

“Put your angriness towards actions, take immediate action, that’s all you have to do,” said one student in response. “It’s so simple.”

Some attendees displayed signs saying “racism doesn’t belong on our campus,” “re-open Title IX investigation” and “do the right thing.”

Eventually, the crowd began a series of chants.

“Looney!” shouted the attendees in response.

They also engaged in another chant saying: “Hey, hey! Ho, ho! Clayton Looney has got to go!”

A group of four Associated Students of the University of Montana senators attended the protest together, but noted that there were not there on behalf of the governing body but rather as individual students.

The issue was first brought to their attention at an ASUM meeting a few weeks ago during public comment, they said. Alyssa Curry, who is white, noted that it was her privilege that brought her to participate in the protest.

"The fact that with my skin color I can feel safe coming here," Curry said. "I think my privilege brought me here so I can be a voice for other people don't have that opportunity."

"I feel really constrained by the processes that we work within in ASUM and the university," Williams said. "Sometimes this is what it takes."

Ultimately, Looney is racist and shouldn't be on campus, Williams said.

University spokesman Dave Kuntz said, “The racist words used by a university employee are reprehensible. We support students in using their voices to express their concerns.”

He explained that as a state agency, the university cannot take action based on Looney’s comments that were made in private to a family member. However, the university can and will continue to collaborate with students and employees to eradicate racism on campus.

Hill asserted that it is the university’s responsibility to make sure that students and staff are safe on campus because “no one wants to work in a place where their colleagues are using the ‘n’ word or referring to Muslim people as slurs.”

Chris Holm and her horse, Cool Hand Luke, won the Morgan World Championship in reining in 2021 at a show in Oklahoma City.

Students in Frenchtown are able to earn college credit before they graduate from high school through a new program through Missoula College.

The latest surge caused by the highly contagious omicron variant peaked in Missoula County on Feb. 6, when there were 3,647 active reports.

People attend a rally on the University of Montana campus Thursday to call for the removal of professor Clayton Looney for racist text messages.

Ajaysia Hill, who has been leading the effort to remove Clayton Looney for racist texts, speaks Thursday at the UM rally.