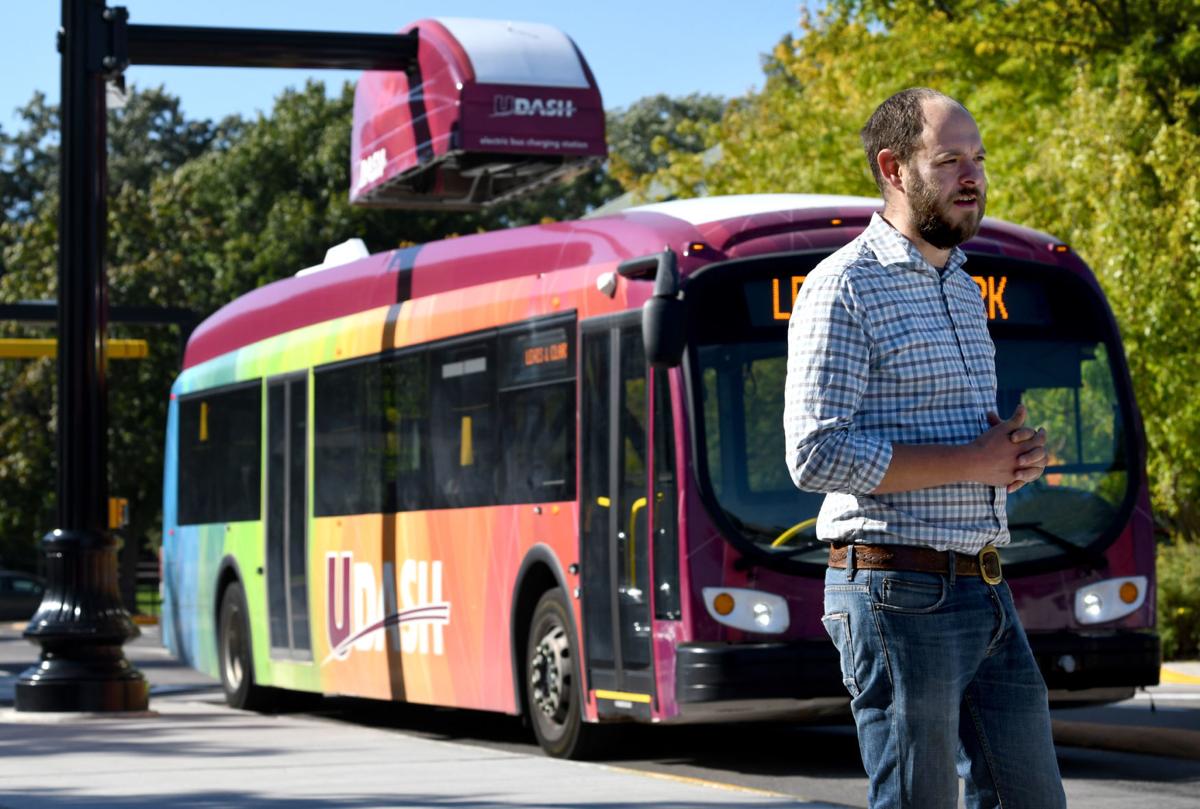 Jordan Hess, director of transportation at the University of Montana, says the school's two electric buses are "saving money, improving our airshed, and providing a great rider experience." The University recently won a $1.5 million award from the federal government to buy three more of the buses. 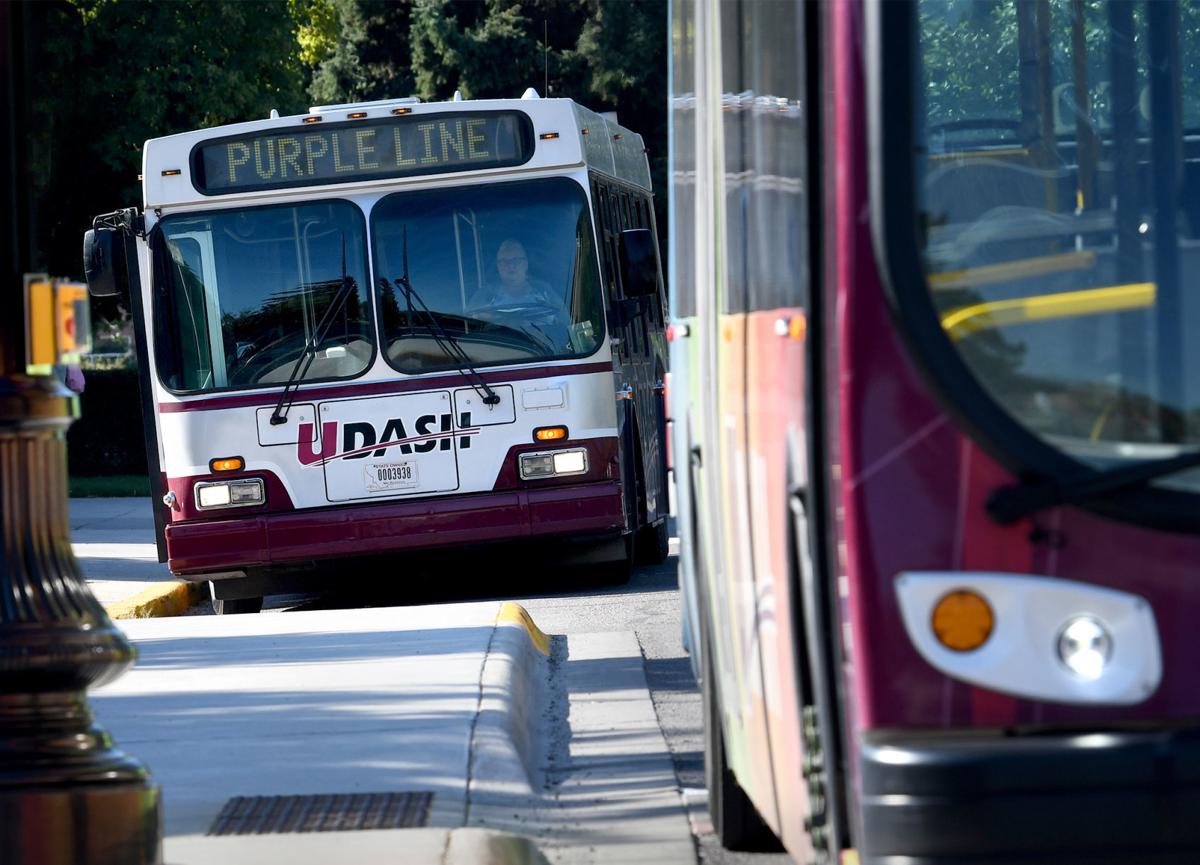 At left, one of the buses that will be replaced by a new electric version has been in service for 20 years and has some 500,000 miles on it.

The new electric bus rolled up to the stop quietly, costing an estimated 20 cents a mile to maintain.

By comparison, the old diesel rattled on its way to pick up students at the University of Montana, costing $1 per mile to maintain and emitting carbon dioxide.

Last week, the Associated Students of the University of Montana Office of Transportation announced it would be able to buy three new zero-emission, battery-electric buses with a $1.5 million award from the Federal Transit Administration. Jordan Hess, director of the ASUM Office of Transportation, said it's unusual for such funds to go to campuses, but UM is innovative.

Commercial buses are built to last 12 years or so, but ASUM Transportation has squeezed 20 years and 500,000 miles out of one groaning diesel in an effort to be a good steward of student funds, he said. ASUM Transportation is funded by a $38 fee students pay each semester, and Hess believes the new buses and affordable maintenance have helped keep the fee level.

He also said the federal award requires a $500,000 local match. ASUM Transportation anticipates the new buses will be in operation sometime in 2020 and phase three old buses out of the fleet.

This week, the two electric buses already in operation are estimated to hit 60,000 miles shuttling riders in a system that's built to serve students and their class schedules and other engagements, Hess said. In fact, he said an efficient bus system plays a role in the retention and success of students.

Campus and state higher education officials have recently shifted the focus from student recruitment and enrollment to student retention. At UM, students don't pay a fare to ride the campus buses, and the buses haul 16 percent of enrolled students and 400,000 passengers a year, according to ASUM Transportation.

The buses also impact people who don't ride them.

"Public transportation benefits the university by reducing traffic congestion and demand for parking," Hess said in a news release about the award.

ASUM President Alex Butler said sustainability is important to students, and the bus fleet reflects consciousness about their carbon footprint.

In 2015, the student body approved a referendum by an 80 percent margin that called on the UM Foundation to divest from fossil fuels. (The foundation has defended its investments as fiscally responsible.) Currently, the ASUM office is working on rolling out a "green office" plan, a smaller initiative but one that also demonstrates commitment to sustainability.

Butler said the choices in transportation reflect the same values.

"Buying electric buses is just one way of implementing the ideas and priorities of students for us to have a sustainable campus," Butler said.

The electric buses cost $800,000, more than the $450,000 purchase price for a conventional bus, Hess said. However, over their lifespans, he said the electric buses will save money for ASUM Transportation and students.

Now that the federal agency has selected ASUM Transportation for the award, Hess said work is underway to sort through details. For instance, he said the buses are built to specification, and ASUM Transportation will need to select a bus door that's designed to last over many hours of opening and closing.

Tuesday morning at the bus stop near the Music Building, driver Stephanie Garrison rolled up in a quiet electric bus. Earlier that morning, she'd driven 52 passengers in one full load to campus, and she was pleased to be doing so in the electric model.

"It's so much smoother than the other bus," Garrison said.

As the electric bus pulled up to the stop, the charger, a device suspended above it, and the bus start communicating to guide the charger into place, Hess said. The charger clamped onto the bus, and after three minutes, he said the bus was full and ready to roll.

Hess said those three minutes are the time a bus might idle anyway to stay on schedule or to give the driver a break.

"We're leveraging what the bus is already doing, and we're charging during that time," Hess said.

Bus fleet by the numbers

In 2016 survey, Missoula mayor, council had highest pay in Montana

The Missoula City Council was the best-paid in the state according to a 2016 salary survey. And Mayor John Engen, one of only three full-time …

University of Montana restructure may consolidate some dean positions

As the University of Montana drives a cost-saving restructure and responds to leadership turnover, changes to some academic dean positions may…

Jordan Hess, director of transportation at the University of Montana, says the school's two electric buses are "saving money, improving our airshed, and providing a great rider experience." The University recently won a $1.5 million award from the federal government to buy three more of the buses.

At left, one of the buses that will be replaced by a new electric version has been in service for 20 years and has some 500,000 miles on it.