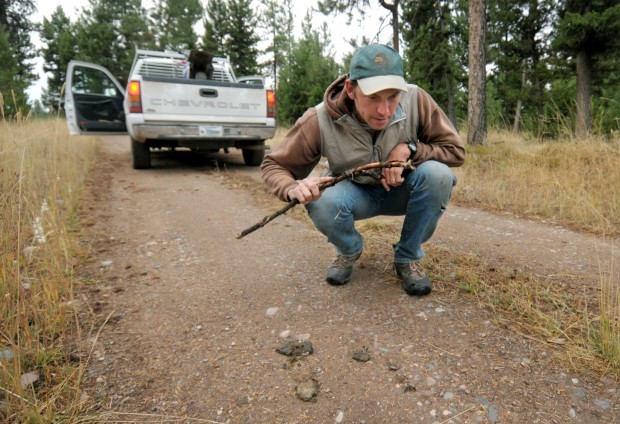 Blackfoot Valley range rider Peter Brown examines fresh wolf scat while keeping tabs on the critters near Ovando Mountain in 2009. The Blackfoot Challenge hired Brown in 2009 to keep track of the wolves and bears in an effort to limit their contact with livestock. 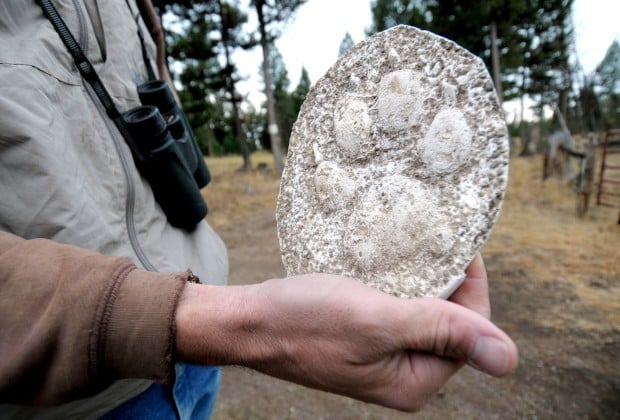 A cement cast of a Blackfoot Valley wolf print gives an idea of the size of the animal. The average weight of an adult gray wolf is around 100 pounds. 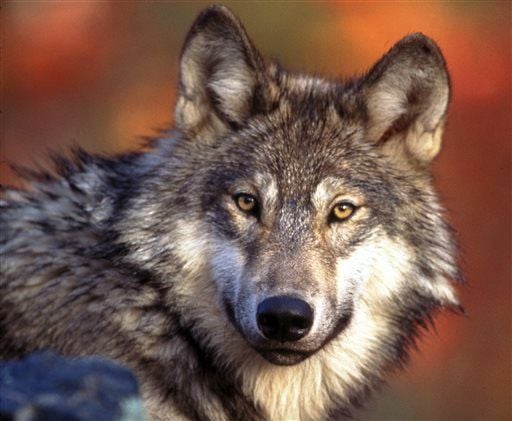 Wolf pack numbers in the Blackfoot River watershed northeast of Missoula have grown from one in 2007 to at least a dozen this year.

But wildlife officials hope the experience adapting to wolves in the Bitterroot Valley to the south may produce a different outcome for other wildlife.

“I know people are really concerned about the wolf numbers,” Montana Fish, Wildlife and Parks Seeley Lake biologist Jay Kolbe said of the population increase. “But they also know we have a more diverse predator population here. We have historic numbers of grizzly bears, and black bears, coyotes and lions here, too. And we’ve had a more integrated broad response.”

After seeing elk herds suffer in the Bitterroot and lower Clark Fork drainages over the past five years, FWP game managers cut back the antlerless elk harvest in the Blackfoot to boost cow and calf survival there. Elk numbers are slightly below or at annual objective levels in nine of the 10 hunting districts in the Blackfoot region. The last district, covering lots of private ranchland around Helmville, is over objective.

Hunting seasons for black bears and mountain lions also were adjusted upward to avoid creating a “predator pit” where too many carnivores are chasing a dwindling number of ungulates.

Despite the upswing in wolf numbers, Blackfoot ranchers have seen little impact on their livestock. Blackfoot Challenge wildlife committee coordinator Seth Wilson said there’ve been only a handful of probable wolf depredations, and no confirmed incidents in 2013.

“We’ve confirmed over the last five years less than four wolf kills per year on an 800,000-acre area,” Wilson said. “That’s about 35 ranches. We’re certainly seeing wolves, tracking them, but the good news is we have not seen a concurrent rise in livestock depredations to wolves over that period. It’s not having an economic impact on ranches.”

“We haven’t done any active hazing this season,” Wilson said, “but we believe having a human presence out there can deter a wolf.”

According to FWP wolf biologist Liz Bradley, Blackfoot wolf numbers expanded steadily until 2010, when they leveled out. Surveys now indicate between 50 and 60 wolves in the region, while the number of packs went from nine in 2010 to perhaps 13 in 2013.

Bradley said that may reflect hunting pressure on wolves, which are running in slightly smaller packs than in previous years. The average size has dropped from seven animals to around five or six. That could be good, because larger packs often get in trouble preying on domestic livestock.

Hunters have killed five wolves in the two wolf hunting districts comprising the Missoula and Blackfoot valleys this season. They’ve shot another eight in the remainder of Region 2, which covers most of west-central Montana.

For the entire state, the take is 46 wolves this fall. The majority of wolves are killed by hunters seeking other game, such as deer or elk.

“Hunters are seeing a lot of wolves, and lots of them don’t have (wolf) licenses,” Kolbe said. “They’re a little upset with themselves. But it’s eye-opening how many are out there.”

The top 10 stories and galleries at Missoulian.com for the past week.

The Montana Fish and Wildlife Commission adopted new administrative rules for killing wolves that pose a threat to landowners’ safety on Thursday. The rule change stemmed from a bill the Legislature passed in the 2013 session allowing landowners to kill wolves without first getting a license if they threaten human safety, livestock or dogs. But it also gave the agency a chance to clear up some confusing parts of the state administrative law book, according to FWP wildlife management section chief Quentin Kujala.

In almost 20 years of shooting photographs in Yellowstone National Park, Pete Bengeyfield had never seen anything quite like an interaction th…

Montana's general wolf season opens Sunday with much looser rules than in past years, as state wildlife officials ramp up efforts to reduce th…

Wolf killed by car on U.S. 93 north of Stevensville

HAMILTON – An adult male wolf was hit by a car and killed on U.S. Highway 93 near Kootenai Creek, just north of the Stevensville Wye, on Saturday.

SPOKANE — Growing up in the Yukon, Melanie Klassen had seen numerous bicycle tourists pedaling the Alaska Highway, but never one with a canine…

Every once in a while, a news story comes a long that screams for attention.

Predator patrol: Blackfoot ranchers rest easier knowing their stock is being watched over by range rider

OVANDO - Peter Brown scoots down the dirt road fast enough to bounce a handful of keys out of the dashboard ashtray when he hits the brakes.

Blackfoot Valley range rider Peter Brown examines fresh wolf scat while keeping tabs on the critters near Ovando Mountain in 2009. The Blackfoot Challenge hired Brown in 2009 to keep track of the wolves and bears in an effort to limit their contact with livestock.

A cement cast of a Blackfoot Valley wolf print gives an idea of the size of the animal. The average weight of an adult gray wolf is around 100 pounds.