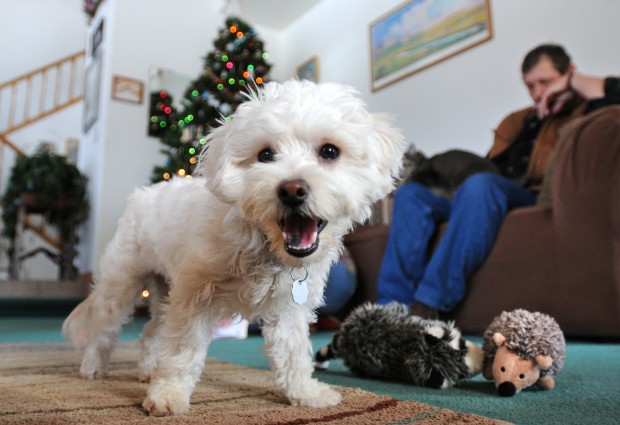 Moose is one of 161 little dogs from California brought to the Humane Society this year and adopted out to people in Montana. 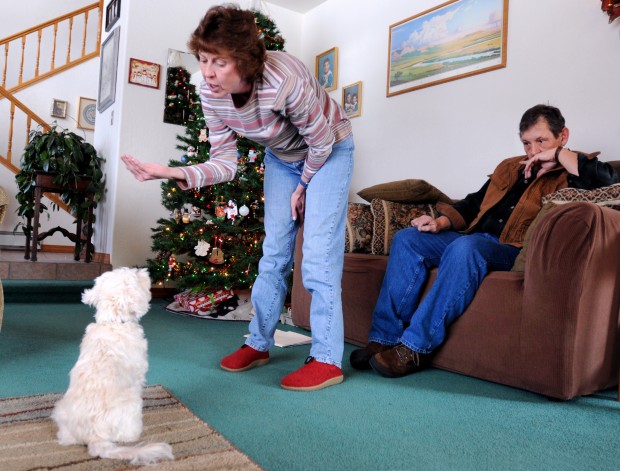 Caron and Dave Skilling of Missoula are big dog people. But when they adopted Moose, a miniature poodle and Maltese cross, from the Missoula Humane Society their opinion of small dogs changed. “I saw him, and when I picked him up, he just snuggled into my chest, and I just knew it,” says Caron Skilling.

Editor’s note: Today, the Missoulian begins a series of stories looking back at people and places that made the news in 2012, and updating their stories.

Moose found paradise at the top of Gharrett Drive in Missoula.

There, the little pup with wavy, cream-colored hair found people who love him, a cat Oliver who plays, and Layla, a grown-up dog who is showing him the ways of the world in the great outdoors – the fenced three and a half acres of the Skilling property.

Caron and Dave Skilling are Moose’s people, and Caron fell in love with Moose the minute she picked up the “California Little” at the Humane Society of Western Montana, where she volunteers. Up until Moose came into their lives, the Skillings had always had big dogs, but Moose’s persona is as big and bright as Sirius.

“I saw him, and when I picked him up, he just snuggled into my chest, and I just knew it,” Caron said.

She took him home on Election Day and promptly returned the dog his dignity, changing the spelling of his name from “Mousse” to “Moose.” The miniature poodle and Maltese cross settled right in as the first small dog in the Skilling household, small enough that Oliver the cat towers over him when the pair play.

At first, Moose didn’t frolic at all. He was a mellow chap, so quiet and sedentary Caron began to worry.

“That first week I had him, I’m not kidding you, he wouldn’t go upstairs, and I was concerned about him,” Caron said.

Then, time, love and maybe a few treats flipped the switch, and the rest is history in the making with Moose, oh, Moosie Moose, Little Buckaroo, Fiesty Fart. Moose leapt out of his furry shell, went from mellow to motoring, and he hasn’t stopped since – unless you count the times he’s doing a slow creep away from Caron for getting into the cat food.

And he’s not the only one.

Moose is one of 161 little dogs from California – the California Littles – brought to the Humane Society this year and adopted out to people in Montana.

A convergence took place that brought about the still ongoing immigration of littles. For one thing, the shelter implores people to “make adoption the first option,” said director Lora O’Connor, but people who wanted little dogs often didn’t find small pets there.

At the same time, the Humane Society had room in its kennels, and another shelter in California had so many little dogs, it was on the brink of killing them. So this year, the littles made their way to Montana in two van trips and four plane rides, and they’ve been snapped up into homes as quickly as they’ve arrived.

“I’ve had countless calls from people who say this is such a great program because we just really wanted to adopt a small dog,” O’Connor said.

In the past, many people told the shelter they had purchased a puppy instead of adopting a dog. Now, the waiting list for a small dog has gone from 63 to just six, and the return rate is 5 percent, “which is very low,” O’Connor said.

Mainly, the little dogs being returned have been ones that aren’t fond of cats, she said. Overall, the adoption rate at the Humane Society is 99.21 percent, and it’s adopted 336 more animals this year as of November compared to last year.

O’Connor figures the Missoula area isn’t close to its saturation point for little pets. While 161 small dogs sounds like a lot for one year, she said there’s a formula for the number of pets in a community, and a rough estimate for Missoula County is more than 20,000 pets.

The big dogs aren’t getting left behind, either, and the shelter is bringing in more senior dogs, too, O’Connor said. She said their adoptions are up, as are cat adoptions, and the shelter appears to have become a destination for people looking to adopt any kind of pet, from puppy to giant pooch.

“There are people that come in looking for labs that want to rescue a senior dog, and our adoptions are up overall,” O’Connor said. “But we feel really strongly that if we have an empty kennel or an empty cat cage that we want to fill it.”

She anticipates some of the 150 malamutes rescued from Jefferson County in an animal cruelty case will head to the Humane Society of Western Montana for adoptions, too.

Back at the Skilling place one day not long ago, Moose jumped up to Layla his big, patient sister, he hopped around his parents, he palled around with stately Oliver the mouser, he dove into his basket of stuffed toys, and he bounced and kissed and rolled. The eight-month-old pup ever so briefly showed off his “sit,” and he tried oh so hard to “stay” – and succeeded until his mom walked away and he galloped after her.

His exuberant dexterity is a feat. Back in California, Moose had fractured his pelvis and underwent surgery, and the doctor neutered him, too. Then, he was shipped to Missoula, where he rested and healed up in one of the Humane Society’s foster homes.

“They have a really, really high placement rate,” Dave said.

“I’ve never bought an animal,” Caron said. “I’ve rescued all of them. They make the best pets, they really do.”

Last March, the family lost Toby, another big dog, and Caron and Dave knew they wanted another dog. They have Layla and two cats, Oliver and Ashley, 18, and Dave didn’t want a yappy dog in the mix.

In the mornings, Dave lets both dogs outside for five or 10 minutes, and then they both come back in and nap a little longer before breakfast. Layla the big dog is showing Moose how to explore the yard and even eat snow, something Moose didn’t encounter in California.

Snow covers the property, and Moose was getting a warm little coat for Christmas. Then, when the weather warms, they’ll play in Montana waters without a doubt. Moose likes jumping into the tub for a bath, so this summer, he’ll camp with the family and swim in Georgetown Lake.

The owner of a day care shut down in August for child endangerment said Wednesday she’s fighting the closure of Tot Town and hasn’t ruled out reopening in the future.

Melanie Hoke, whose day care license was revoked last summer by the Montana Department of Public Health and Human Services, is appealing the state’s decision. In the next 14 days, her lawyer plans to file a motion for summary judgement, Hoke said; she denied being involved in the incident that led to the closure, but declined further comment until the court document was filed.

This year, a border collie named Lucky Dog will continue to run and play in her big backyard, and the Humane Society of Western Montana turns …

When Peter Rork flew his Cessna 206 into Missoula on Tuesday, a greeting party of 14 welcomed the precious cargo he carried.

Instead of facing his death sentence this month, George, a friendly chihuahua cross, found on Saturday a brand new family to call his own.

Moose is one of 161 little dogs from California brought to the Humane Society this year and adopted out to people in Montana.

Caron and Dave Skilling of Missoula are big dog people. But when they adopted Moose, a miniature poodle and Maltese cross, from the Missoula Humane Society their opinion of small dogs changed. “I saw him, and when I picked him up, he just snuggled into my chest, and I just knew it,” says Caron Skilling.