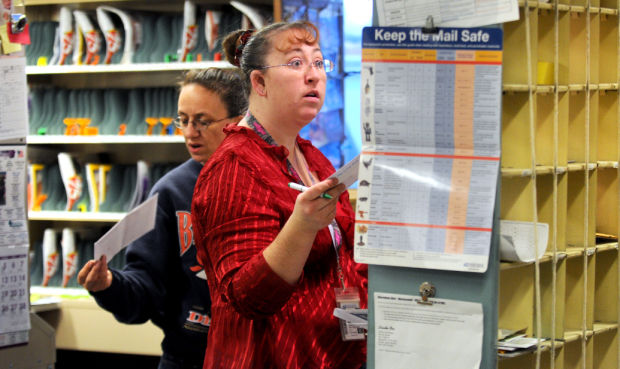 Postmaster relief Amanda Bettencourt, right, and Neoma Cox sort mail at the Charlo Post Office on Christmas Eve. Rather than close post offices around the country, the U.S. Postal Service has reduced hours of operation at many locations. 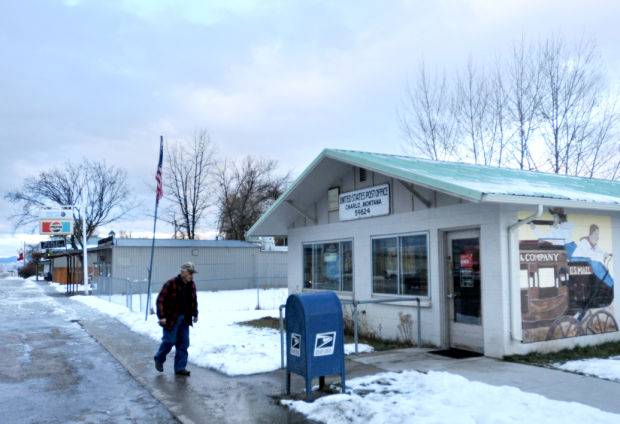 Neal Coulter of Charlo walks to the post office to pick up his mail Tuesday morning.

It’s a nuisance to the locals and stressful to post office employees, but Hall makes it work.

The small ranching town in Granite County saw the retail hours at its post office chopped in half last March, from eight to four.

It was part of the U.S. Postal Service’s massive nationwide cutbacks that by the end of 2014 will affect some 13,000 rural towns, 29 of them west of the Continental Divide in Montana.

“We’re such a small community and we have a grocery store next door,” Tina Johnson said last week. “If customers can’t make it down in time, they call us and we just drop it over there. So we’re still delivering their packages.”

Johnson is Hall’s acting postmaster – “Officer in Charge,” in Postal Service parlance. It’s the designation for a career employee who is appointed to temporarily fill a postmaster vacancy. Except in this case and many others there’s nothing temporary about it.

Across the nation OICs and PMRs (non-career postmaster reliefs) are standing in where postmasters used to tread. Cutbacks that the struggling Postal Service says will save $500 million a year are not only reducing the hours post office windows are open in many rural communities but the number of full-time and career employees as well.

It’s all in lieu of the massive closures the USPS set out to implement a few years ago, then backed down from in the spring of 2012 in the face of a serious backlash.

“We started doing the hour reductions in the fall of 2012 with the idea it would take two years,” Pete Nowacki, a Minnesota-based regional spokesman for the Postal Service, said this week. “We’re looking at having it all complete by October of 2014.”

USPS introduces the cutbacks locally at a town meeting that in many instances follows an admittedly one-sided survey. In essence, the poll asks locals if they’d prefer their post office be open for fewer hours or that it close altogether.

The first meeting in these parts was held in Elliston in October 2012. Others were staged that December in Bonner and Clinton, and in a dozen other towns in the first months of 2013.

One of the last ones cut deepest. On March 20, residents of Elmo on the Flathead Reservation learned that, come May, weekday window hours at their full-day post office would be reduced to just two, from 9 to 11 a.m. No other post office in Montana took such a drastic hit in the first round.

Elliston, 20 miles west of Helena, was one of nine towns on this side of the divide to see weekday retail post office hours cut from eight to four. Like many, it chose the morning hours – 8 a.m. to noon – to open.

Laura Esterby has worked at Charlo’s Coulter Automotive for years. She said it’s taking time to adjust to the new hours at the post office down the street.

“There are plenty of people that complain about it,” Esterby said. “They’ll call and ask when the post office closes. You tell ’em 12 o’clock. Usually they call about 2:30.”

The choice then is to wait until the next morning or drive 10 miles more into Ronan.

After a Christmas moratorium around the USPS system, Olney will be cut to four morning hours on Jan. 11. A dozen other post offices from Fortine, Trego and Stryker in the northwest to Warm Springs in the southeast will endure cuts in October following town meetings that are yet to be scheduled.

Alberton is considered a level 13 post office based on volume of mail, so its window hours will be reduced to six upon the retirement of postmaster Sue Hanson.

Several other longtime postmasters in the region have accepted early retirement packages the Postal Service offered to more than 15,500 career employees in order, it said, to avoid layoffs. Those who accept the offer won’t receive any financial incentive but will collect their retirement annuities earlier than they could have otherwise.

Hours at the Big Arm post office will go down to six in the fall. Postmaster Aimee Lamoreaux of Kalispell doesn’t have enough time with the Postal Service to retire. That means she’s got until Sept. 30 to land another job with USPS “or I’m kind of like fired,” she said.

If there has been a sustained outcry from the rural communities affected so far, “I’m not seeing it,” Nowacki said. “I think in a lot of these cases, when we hold a meeting, people are grateful that we’re keeping their post office open and they understand the kind of cost pressures we’re under.”

Single-piece, first-class mail is down roughly 60 percent in the past 10 years, he said.

“You put a 46-cent stamp on each one of those and all of a sudden you’re looking at $14 billion that we don’t have.”

In Hall, Johnson is in her eighth year as a postal employee. That’s enough for her.

Johnson is on an hourly wage with no benefits, as is her Saturday relief, Jennifer Keith. Their window is open from 9 a.m. to 1 p.m. weekdays and 8 to 10 a.m. on Saturdays. They get paid for those 22 hours and say it’s not enough to do their jobs.

“I work a lot of it for free, to tell you the truth. Every time I get any little overtime, they call and question it,” said Johnson, adding that she’s basically doing the same amount of work for half the paycheck.

“When you have people at the counter until 1:20, that’s already put you 20 minutes overtime and then you’ve got to put the safe away and the till away and shut up the office and do your paperwork,” she said. “Either you donate that time or you get overtime, it’s just that simple.”

Johnson and her husband have lived in Hall for 15 years, and she has worked at several post offices around the area since 2005. Randall Johnson recently accepted a new job, and come spring they’ll be moving to Portland, Ore.

“I’ll never work for the post office again,” she vowed.

USPS is currently trying to push through Congress a plan to restrict Saturday service to the delivery of packages. But Nowacki said there is no thought of making further cuts or closures at the rural level.

“This is the plan we put forward. This is what we see as working for us, being able to keep these offices open and being able to realize some savings,” he said. “I don’t see anything on the radar that would change from this.”

Forbes hasn’t looked closely at the bottom line in Elliston, but he said the reduced hours since Feb. 9 has no doubt cost the post office business.

He wonders what could happen if the volume doesn’t measure up to somebody’s standards in the USPS. Still, he said, there’s “a fair amount” of mail coming in and the package business picked up in the weeks leading up to Christmas.

“Some days it’s a little more difficult to get everything done in the allotted time than when we had a full eight-hour day,” Forbes said. “And periodically we have to do some training, and it makes it a little tough to get that done during the day. But we’re plugging away.”

Note: The Olney post office will be open from 8 a.m. to noon effective Jan. 11. The other 2014 changes will occur starting in the fall.

Today, the Missoulian continues its weeklong series updating readers on news stories from 2013.

A Missoula man whose legs were shattered after a bridge jumper landed on him in the Clark Fork River last July remains on a long, and unexpect…

Butte post office back on track after delays; Tester lashes out over rural delivery problems

The Butte post office is responding to criticism over delivery delays as U.S. Sen. Jon Tester continues to lambaste top brass in the U.S. Post…

Postmaster relief Amanda Bettencourt, right, and Neoma Cox sort mail at the Charlo Post Office on Christmas Eve. Rather than close post offices around the country, the U.S. Postal Service has reduced hours of operation at many locations.

Neal Coulter of Charlo walks to the post office to pick up his mail Tuesday morning.