Become a Member
Read Today's E-edition
Share This
Updated: Avalanches, snow and ice in forecast for western Montana
0 Comments
Share this
1 of 4 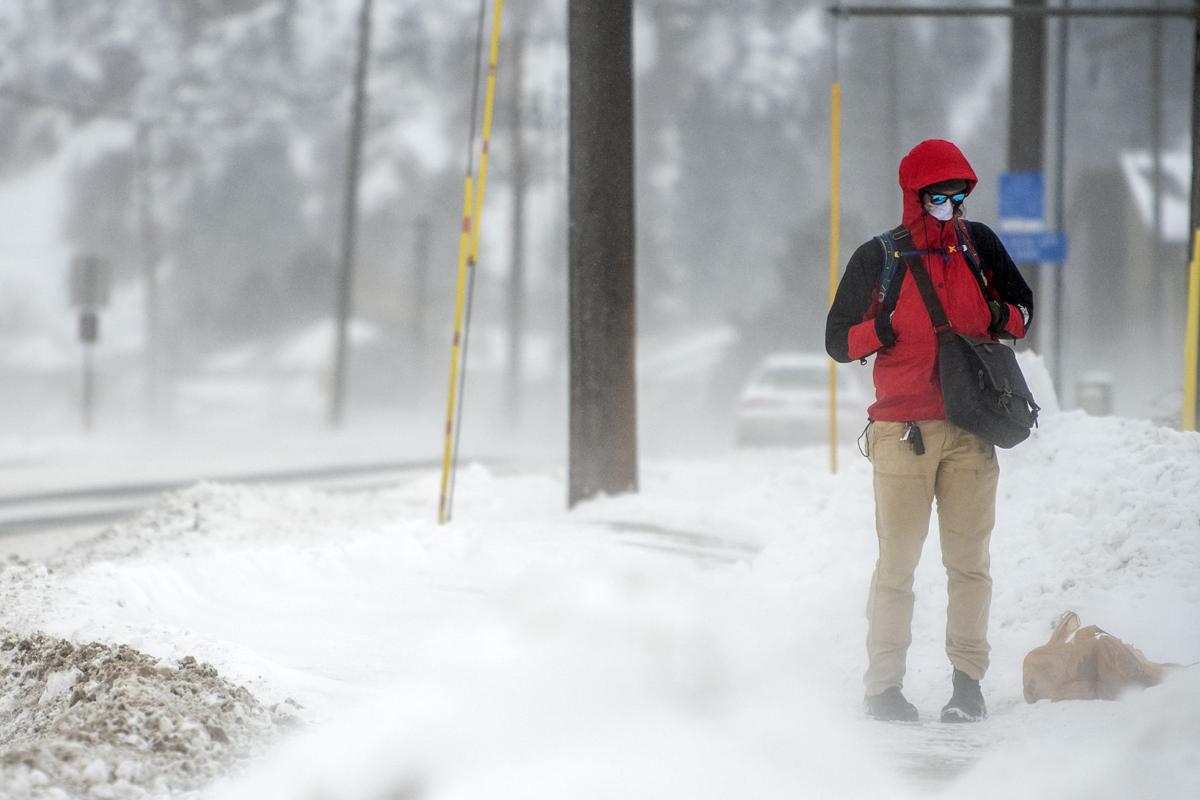 A man shields himself from the wind and snow while waiting at a Mountain Line bus stop on East Broadway on Wednesday. A weather system with “a lot of moving parts” should bring lots more snow to western Montana on Thursday. 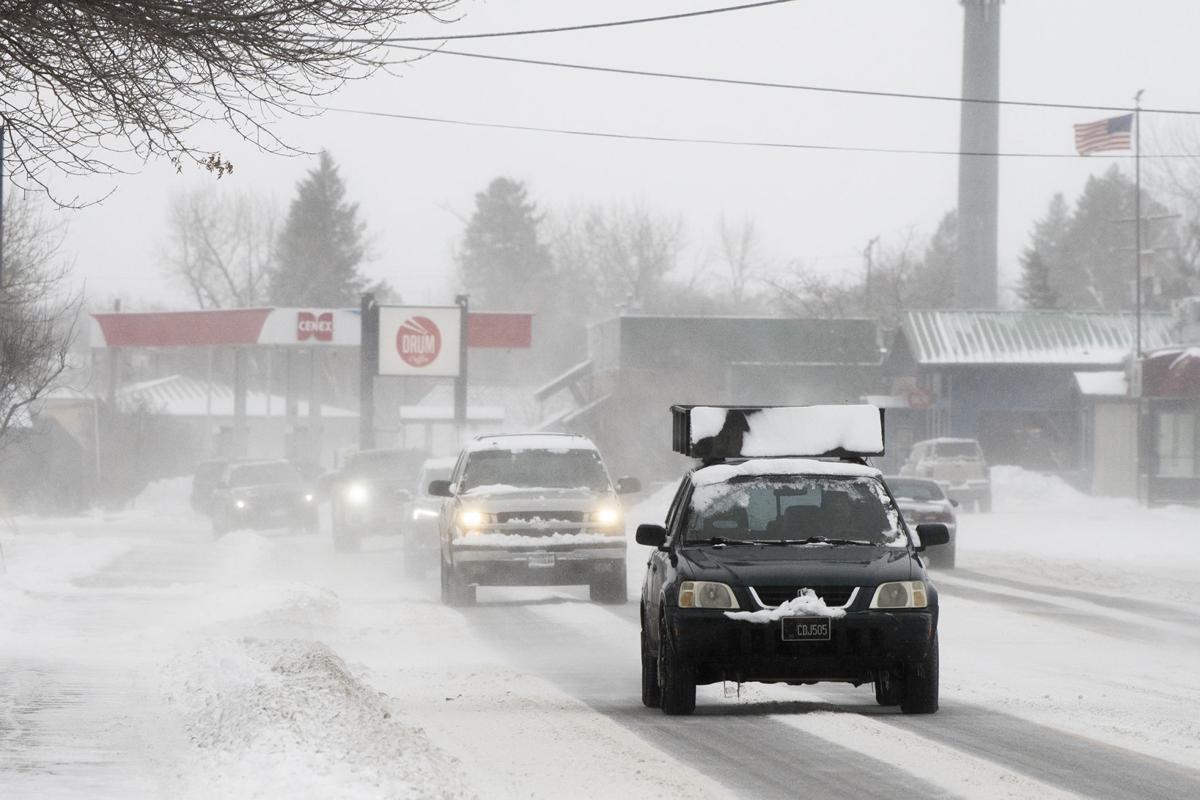 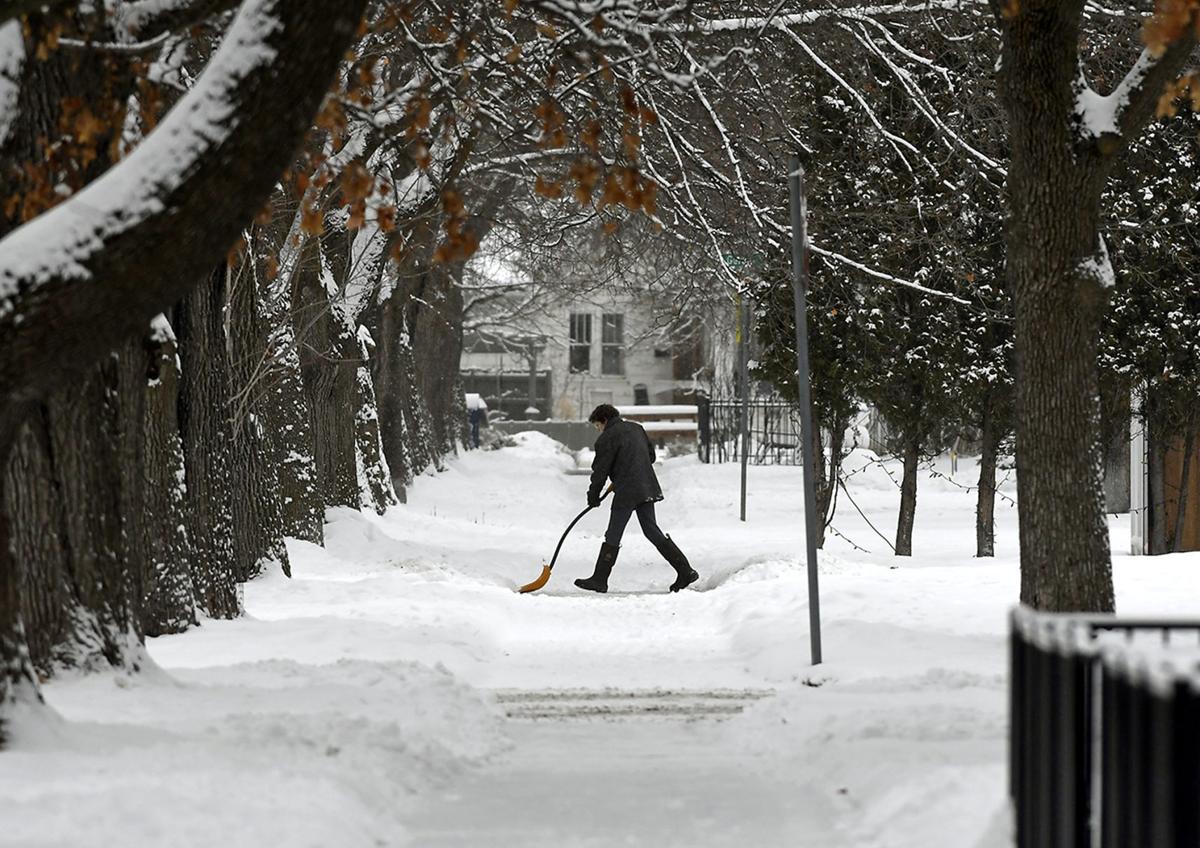 A person shovels snow in Missoula's university district on Wednesday. 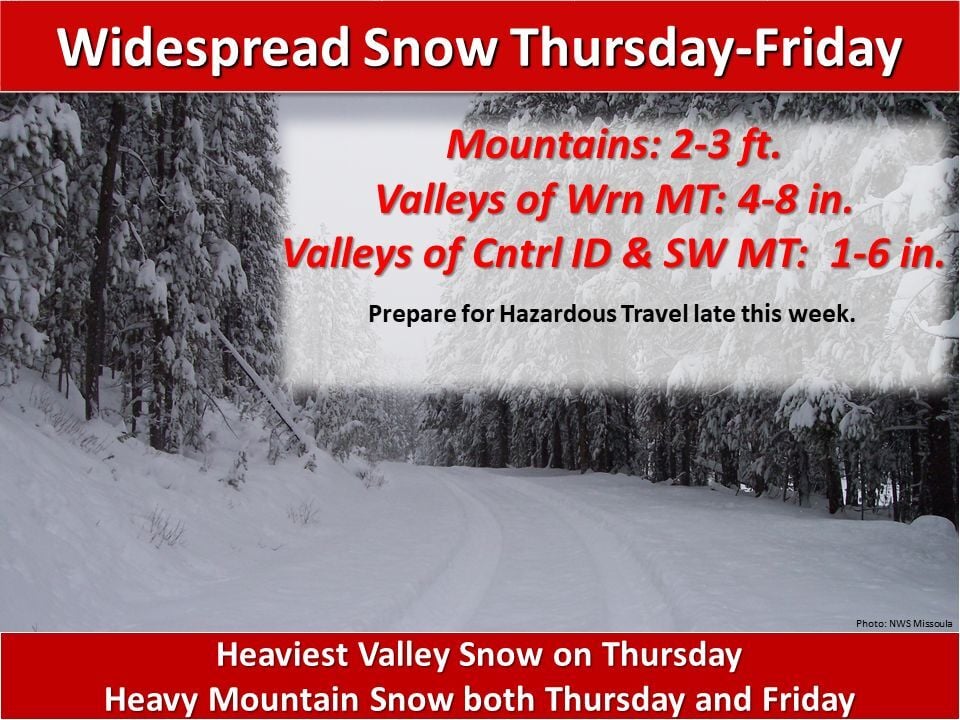 After a sideways snow flurry blasted the Missoula Valley Wednesday evening, a weather system with “a lot of moving parts” should bring lots more snow to western Montana on Thursday and Friday.

The new snow was falling on a layer of low-density snow that had been gently building up through December, resulting in slabs up to 3-feet thick and "creating the perfect recipes for avalanches," Sorenson wrote. Travel in avalanche terrain was not recommended.

“We’re looking at deep snow most areas through Thursday morning, with pockets of icy conditions Thursday and Friday, while mountains continue to get lots of snow,” National Weather Service meteorologist Trent Smith said on Wednesday. “Our mountains are looking to get anywhere from 2 to 4 feet (of snow).”

A mass of cold air moving south and west out of the Canadian plains was expected to come pouring over mountain passes Wednesday evening and Thursday morning, bringing many areas down to zero or sub-zero wind chills east of the Continental Divide, according to National Weather Service forecasts.

Meanwhile, a subtropical atmospheric river from the Pacific Ocean has been pushing east across Idaho into Montana and will cause a rapid increase in snow accumulations through Thursday and Friday. In the Missoula vicinity, that could total 5 to 9 inches on Thursday. The Bitterroot Valley has 3 to 8 inches of snow in its forecast.

"If there were a day to delay your discretionary travel, today is definitely that day!" a Thursday NWS forecast bulletin noted. "If you still plan to travel, prepare ahead of time with extra food, water, and something to keep you warm in the case that roads become impassible."

Unfortunately, many lower valley areas could see temperatures rise on Thursday and Friday, turning the snow into rain. A mix of snow and rain is in the forecast for Thursday night and Friday early morning, followed by gusty winds and snow until 2 p.m. and mixed snow and rain again through the afternoon and evening.

That warm spell is predicted to stall by Friday evening, turning precipitation back to snow Friday evening and Saturday. However, predictions are complicated by the warm, gusty air, which could either form a crust over the snow or leave it loose to blow and drift.

The final stage of all this winter activity looks like a high pressure ridge settling over most of the western United States starting Saturday. For Missoula and surrounding valleys, that typically means foggy mornings and overcast days, with a strong potential for air inversions.

Rob Chaney's most memorable stories of 2021

Every reporter faces the daily challenge of escaping the desk. In looking back at 2021, most of my best stories came on days on the road, out in the woods, or visiting people in their special places.

The one exception is one of the most-read Missoulian stories this year: The Board of Review account of Carl Mock's fatal encounter with a grizzly bear near West Yellowstone. Recreating the scene, and the emotions of a tragic event from an after-action report does credit to the people involved, who shared their memories in hope of saving future wilderness visitors from danger.

Letting Steve Briggs catalog the jumbled pile of treasures and bits of Missoula history stashed in his Alderwood Pawn was like Christmas shopping on Memory Lane. Seeing Ben Allan Smith's photos brought the experience to everyone.

Explaining the challenge of a changing climate gets a lot easier when you have someone who's been at the heart of the research for years living in your hometown. Steve Running authored a major part of the ICPP climate report that won the 2007 Nobel Peace Prize, so it was natural to have him help illuminate the outcomes of global climate debates coming out of COP 26 in Scotland.

Tom Bauer has photographed Montana's famous people and fantastic country for decades, so it was inspiring to travel with him to cover the funeral of Earl Old Person, Blackfoot political and hereditary chief and longest-serving head of state in the world after Queen Elizabeth.

The Rattlesnake Wilderness looms outside my window at the Missoulian, but it took decades for me to finally get deep inside and see the wonders it offers. Getting there also helped frame the challenges Missoulians face as they ponder what to do with aging drinking water reservoirs whose existence mars the character of the wilderness.

For all its million wild acres of peaks and lakes, Glacier National park is not legally wilderness.

Eastbound traffic is moving, but delays are expected, according to the Montana Highway Patrol.

Despite atmospheric rivers to the west and Alberta clippers to the east, the Missoula area looks stuck in a funk of foggy drizzle for mid-January.

Retinal scan may show if you're at risk of early death

Gucci is under fire for using real tigers in ad campaign

Gucci is under fire for using real tigers in ad campaign

Blinken, in Ukraine, calls on Putin to choose 'peaceful path' or face 'consequences'

Blinken, in Ukraine, calls on Putin to choose 'peaceful path' or face 'consequences'

A man shields himself from the wind and snow while waiting at a Mountain Line bus stop on East Broadway on Wednesday. A weather system with “a lot of moving parts” should bring lots more snow to western Montana on Thursday.

A person shovels snow in Missoula's university district on Wednesday.