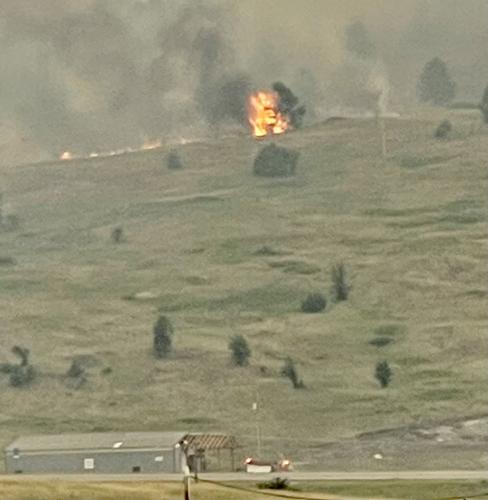 A building burns north of Big Arm Bay during the Elmo 2 fire's extensive run on Monday. At least four homes and four outbuildings have burned in the fire alongside Flathead Lake, which was at least 18,000 acres on Wednesday. 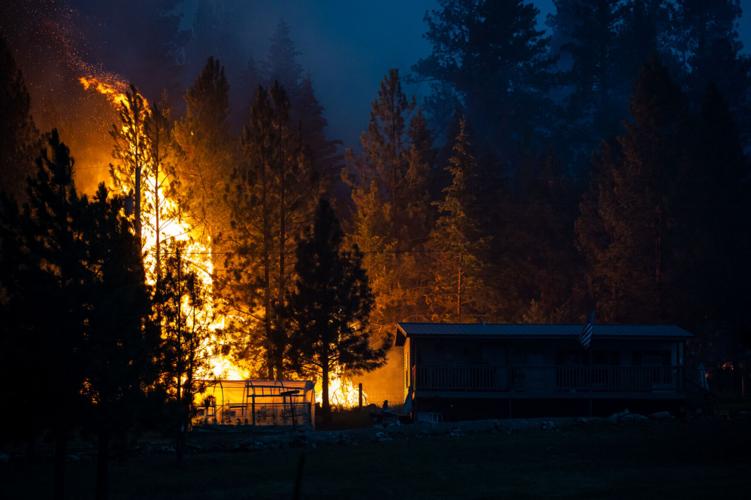 Fire activity erupts next to a home off of Highway 93 outside Elmo on Aug. 1.

The Elmo 2 fire burns toward Lake Mary Ronan on Aug. 3. Red-flag conditions pushed the fire toward the lake, which is subject to a full evacuation order. 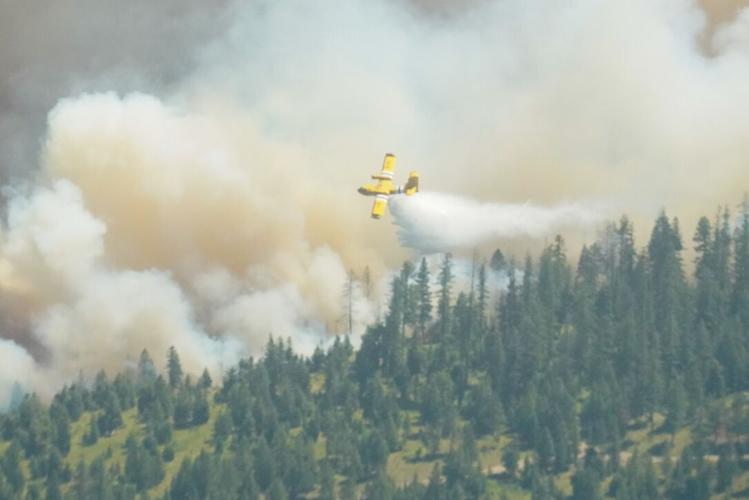 A Bridger Aerospace scooper plane drops water on the Elmo 2 fire near Lake Mary Ronan on Aug. 3. Red-flag conditions pushed the fire toward the lake, which is subject to a full evacuation order.

At least four homes have been lost to the Elmo 2 fire on the west side of Flathead Lake near Elmo and Dayton as of Wednesday morning.

The fire was very active on its north end, just south of Lake Mary Ronan on Wednesday, according to the incident management team coordinating firefighting efforts. There is "high potential for the fire to reach the lake by this evening."

The Lake County Sheriff's Office reiterated that anyone in an evacuation zone should leave immediately because the fire could burn over Lake Mary Ronan Road and trap residents who elected to remain along the road or around the lake. Lake County Sheriff Don Bell told the Missoulian in a text message that approximately 150 homes were under an evacuation order midday Wednesday.

Active fire behavior with aggressive fire spread was expected Wednesday and beyond, according to an InciWeb page for the fire. Bell and Northern Rockies Team 7, the incident management team overseeing the firefighting effort, each confirmed Wednesday that a total of eight structures — four primary residences and four outbuildings — had burned.

The fire grew to 18,427 acres by Wednesday morning and was 16% contained. Containment was exclusively along State Highway 28 to the fire's south. A map of the fire perimeter included in an update Wednesday morning showed the fire had pushed east to Chief Cliff Lane and Black Lake Road, between Dayton and Elmo near the shore of Flathead Lake's Big Arm Bay. The fire was also around Red Lake Road, just south of Dayton Creek Road off of Lake Mary Ronan Road. All of those areas are subject to evacuation orders.

Evacuation centers have been established at Polson High School and Somers Middle School.

Highway 93 is only accessible by pilot car between Elmo and Dayton, with potential closures depending on the fire. Officials ask the public to not stop on the road for fire viewing. Lake Mary Ronan State Park and the boat ramp at the Elmo fishing access area are closed to the public.

The cause of the fire, which ignited Friday afternoon, is still under investigation.

A red-flag warning indicating critical fire weather was issued Wednesday through 9 p.m. Thursday for much of Montana, including the Missoula and Flathead regions. Humidity as low as 13%, sustained winds 15–25 mph with gusts up to 40 mph "and an unstable atmosphere will result in critical fire weather conditions Thursday afternoon and evening," according to the National Weather Service. Fire danger on the Bitterroot National Forest is extreme, the highest of five levels. Fire danger is very high, the second-highest level, on the Lolo National Forest. Fire danger is extreme on the Salmon-Challis National Forest in Idaho.

In the Mission Mountains north of Missoula, the lightning-caused Redhorn fire grew to 144 acres by Wednesday, according to the Confederated Salish and Kootenai Tribes Division of Fire. The fire, which is 0% contained, was discovered around 5:47 p.m. Monday, about 7 miles northeast of St. Ignatius and just south of McDonald Lake on the west side of McDonald Peak, in the Tribal Mission Mountain Wilderness. The fire is in a grizzly bear management zone that is closed to recreation annually from July 15 to Oct. 1.

The fire is not threatening any structures. Forty-two personnel are assigned to the fire, working under a local Type-III incident management team.

"Intense fire activity was visible during the heat of the day yesterday," the agency stated in an update Wednesday. "Aviation will be used for water drops when the weather allows it. CS&KT Division of Fire staff will actively monitor and assess fire growth and look for suppression opportunities."

The Lake Marshall fire, another lightning-caused fire in the Missions, is burning about 12 miles northwest of Seeley Lake and on a mountainside directly above Lake Marshall. The fire was discovered around 7:35 p.m. Monday and is burning in heavy timber and dead and down trees. Firefighters began engaging the fire Monday evening and it was about 1 acre on Tuesday, according to Kristin Mortenson, who handles community preparedness and fire prevention for the Montana Department of Natural Resources and Conservation Southwestern Land Office.

Two new fires are burning on the same mountainside in the Missions. Crews were dispatched to the Crystal fire around 2:46 p.m. Tuesday. The fire was initially listed as 1.2 acres, burning on a southeast-facing mountainside to the northeast of Crystal Lake and southwest of Lindbergh Lake, about 18 miles northwest of Seeley Lake. The Crystal Light fire was dispatched at 7:47 a.m. Wednesday and listed at 0.25 acres in the same area as the Crystal fire, about 600 feet upslope and north, according to an interactive wildfire map maintained by the DNRC.

The lightning-caused Weasel fire near the U.S.-Canada border was estimated at 155 acres, down from an initial estimate of 250 acres, according to an update Wednesday from the Kootenai National Forest. The fire is being managed by a local Type-III team and "experienced minimal growth yesterday." Sixty-nine personnel are assigned to the fire, which is located near Camp Creek and Weasel Creek in the Whitefish Mountains on the Kootenai National Forest about 1.65 miles south of the border.

On Wednesday the fire was experiencing moderate behavior with tree torching and spot fires, according to an InciWeb page for the blaze, and active fire behavior was projected for coming days. The Weasel Cabin was wrapped in protective material on Tuesday.

Grave Creek Road is closed from Foundation Creek Trailhead north to the end of the road at Big Therriault Lake. Big and Little Therriault campgrounds are closed.

The Moose fire near North Fork, Idaho, grew to 62,410 by Wednesday morning, up from 58,168 acres the day before. Containment dropped from 23% to 20% because of fire growth. The blaze ignited mid-afternoon on July 17 and rapidly grew amid high winds and red-flag conditions over the following week. Red-flag conditions over the weekend caused extreme fire behavior. The fire is expanding on three fronts — to the west, south and east — driven by chaotic wind patterns through river canyons, up and down slopes, and over ridge tops.

Residents in the North Fork area have maintained that the fire was caused by an unattended campfire.

On Wednesday, the fire was experiencing "active surface and large crown fire activity" around Pine Creek, and active fire behavior was projected through the weekend. The Salmon River Road is partially closed, with only residents, rafting outfitters and river users with float permits allowed through behind a pilot car.

On Wednesday, 937 personnel were working the fire, including 25 hand crews and 48 engine crews, and aided by 10 helicopters. Large air tankers were flying over the fire Wednesday.

The lightning-caused Hog Trough fire about 18 miles southeast of Hamilton was 749 acres on Wednesday, a growth of just 18 acres from two days prior. On Wednesday, 273 personnel were working the fire, which is burning in the Sapphire Wilderness Study Area across the Bitterroot and Beaverhead-Deerlodge national forests and about 5.4 miles east of the Black Bear Campground. The fire is not threatening any structures. A Type-III team is managing the fire but ground-based firefighters are not yet directly engaging the blaze, which is in a 22-year-old burn scar, because of "extremely remote, rugged and inaccessible terrain." The team plans to make water drops on the fire via helicopter and ground crews are thinning fuels and constructing containment lines around the fire.

A red-flag warning indicating critical fire weather was issued Tuesday for much of Montana, including the Missoula and Flathead regions.

Spruce Street was blocked off between Ryman Street and Higgins Avenue as of 3:30 p.m.

The county originally settled the lawsuit for $3.45 million, but additional costs have piled up around taxes, benefits, issuance and interest penalties.

'Different tool in the toolbox': How aircraft dampen fire growth

Residents, firefighters, tourists and rubberneckers on the west shore of Flathead Lake this past week may have noticed something unusual in the air.

A return to hot, dry, windy conditions with afternoon thunderstorms could challenge firefighters this week.

Wildfires in or near western Montana continued to gradually expand Monday, although some have seen little change in recent days.

Ukrainians struggle with separation from loved ones

Ukrainians struggle with separation from loved ones

A building burns north of Big Arm Bay during the Elmo 2 fire's extensive run on Monday. At least four homes and four outbuildings have burned in the fire alongside Flathead Lake, which was at least 18,000 acres on Wednesday.

Fire activity erupts next to a home off of Highway 93 outside Elmo on Aug. 1.

The Elmo 2 fire burns toward Lake Mary Ronan on Aug. 3. Red-flag conditions pushed the fire toward the lake, which is subject to a full evacuation order.

A Bridger Aerospace scooper plane drops water on the Elmo 2 fire near Lake Mary Ronan on Aug. 3. Red-flag conditions pushed the fire toward the lake, which is subject to a full evacuation order.