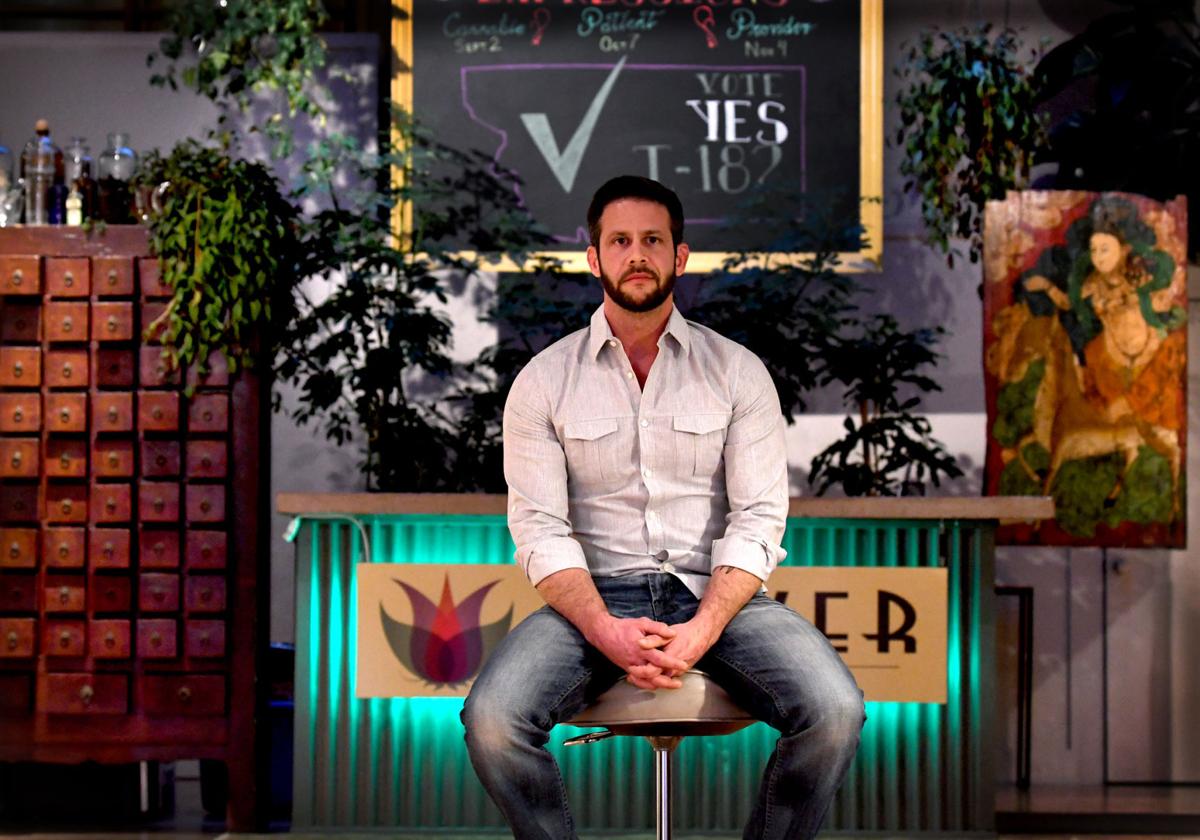 Bobby Long, sits in front of the counter Wednesday afternoon at Flower Montana, a medical marijuana dispensary he owns in downtown Missoula, where, he says, he'll be open for walk-in customers Thursday. A judge's ruling Wednesday that Montana's Medical Marijuana Initiative, abolishing the three-patient limit on dispensaries, should be effective immediately will provide his clients with much needed relief, he says. The limit "punished the patients and the sickest people in the state," Long says. "It helped the black market and hurts people who were trying to do the right thing." 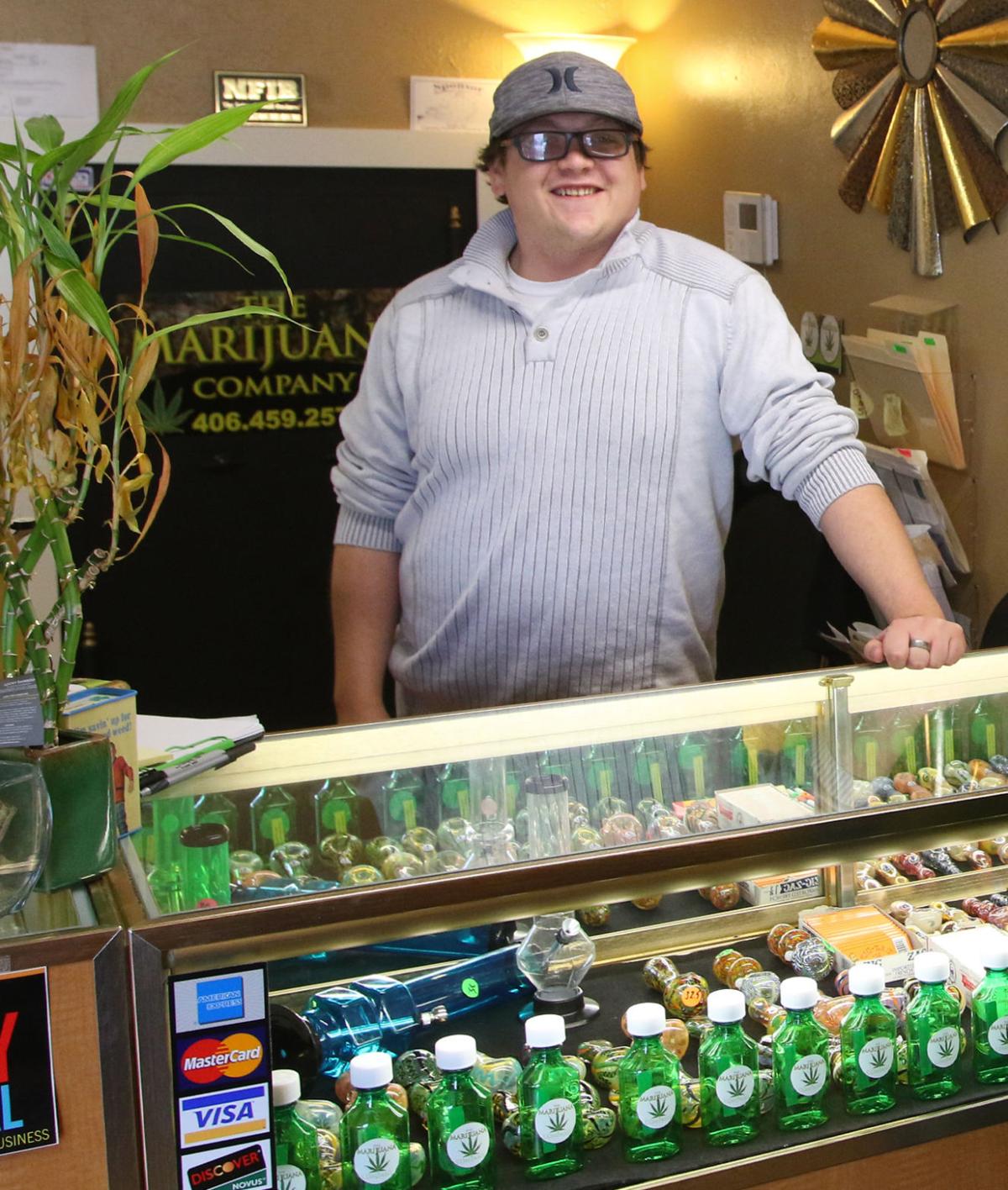 George Zachary of The Marijuana Company, 2040 Harrison Ave., opened the dispensary doors, following a court ruling that the new medical marijuana law is effective immediately. He is pictured here on Wednesday.

HELENA – A judge on Wednesday cleared the way for Montana's medical marijuana dispensaries to reopen after a three-month hiatus by ruling that a drafting error in a voter-approved ballot initiative should not delay the measure's implementation.

District Judge James Reynolds of Helena ruled the error that pushed back the effective date of a key portion of the initiative until July 1 should not keep very ill patients from accessing the drug immediately.

"The folks that are maybe the most in need are the least able to provide, to grow their own," Reynolds said in making his ruling. "I think speed is more important than niceties."

The initiative approved by voters last month struck down a law passed by the Montana Legislature in 2011 that limited medical marijuana providers to three patients each. The three-patient limit took effect Aug. 31 after a five-year court battle, forcing the closure of medical marijuana dispensaries across the state and leaving thousands of registered users without providers.

“It punished the patients and the sickest people in the state,” said Bobby Long, owner of the Flower dispensary in Missoula. “It helped the black market and hurts people who were trying to do the right thing.”

The authors of the ballot measure, the Montana Cannabis Industry Association, had intended for the three-patient limit to be struck down immediately upon passage of the initiative.

But a last-minute flurry of activity between initiative sponsors and state officials resulted in two new sections being added to the measure, changing the numbering of the sections in the initiative, according to the group's lobbyist, Kate Cholewa. The part of the initiative that laid out the effective dates of the various sections of the measure was not updated to reflect the final changes, she said.

The advocacy group took their case to Reynolds, who had twice ruled to block the three-patient limit while the challenge to the 2011 state law was making its way through the courts. Reynolds said the effective date issue was clearly an error, that the advocacy group had meant for the measure to take effect immediately and that the group had publicly campaigned that it would upon passage.

The judge, in an aside, noted that federal and state laws regarding marijuana remain in conflict while the number of states legalizing recreational pot is growing.

"We're in a morass here," he said of the disparity between federal and state laws. "Folks are speaking with their votes."

Cholewa said it was not clear how much time providers would need to get their operations up and running. She acknowledged that shortages in marijuana supplies, a rush to physicians who refer patients, and how the state Department of Public Health and Human Services administers the changes could cause delays.

"The people who work providing marijuana in Montana were, let's face it, they were jerked around quite a bit," Cholewa said. "They are somewhat used to it and very good at coming back. "

After more than two years of operating out of a basement shop in downtown Missoula, Long moved Flower to a street-level spot on Higgins Avenue this summer, despite knowing at the time that 30 days later the three-patient limit would be enforced. Long decided to turn the dispensary business into a gallery – hosting First Friday events including portrait photos he’s taken of medical marijuana patients – and using it to provide education about the issue and the people effected by the changes in the laws and rulings by the court.

After hearing the news about the judge's ruling on Wednesday, Long said he sent out a newsletter to his former clients and spent the rest of the day getting ready to file paperwork with the state that he’s been holding for some former clients since shortly after their medical marijuana cards were revoked.

“I was also trying to have a moment to enjoy the victory,” he said. “But I want to work to get access back to people as quickly as possible.”

Flower will be open from noon to 5 p.m. Thursday for walk-ins, and Long said he’ll help people connect with clinics and talk to them about what paperwork they will need to fill out and file. Then he’s looking forward to ramping up production as patients are re-certified by the state.

One dispensary, The Marijuana Company, posted on Facebook "WE ARE OPEN!!! We are accepting new patients!!!" Its owner, J.J. Thomas, said his company served about 100 patients in Butte and Helena before it shut down in August.

"It's been brutal," Thomas said. "We were forced out of business, and we were trying to hang on until we could re-open. If we had to wait until June, we probably would have had to throw in the towel."

The Marijuana Company will accept the paperwork of any patient who wants to list the dispensary as his designated provider, but it will have to offer marijuana on a first-come, first-served basis until its supplies are replenished, he said.

The state health department did not oppose the advocacy group's effort to change the effective date through the courts, attorney Nicholas Domitrovich said.

"We have the program in place. We have the staff in place," Domitrovich said before the ruling. "We are prepared to act, but we feel we don't have the proper legal cover right now."

Another provision of the initiative, allowing people diagnosed with post-traumatic stress disorder to use medical marijuana, has already gone into effect and was not affected by Wednesday's ruling.

There were 7,558 enrolled medical marijuana patients in Montana in November, and 6,557 without a designated provider, according to health department statistics. There were more than 30,000 people enrolled before state lawmakers in 2011 passed the restrictive law, citing the need to close loopholes that allowed the medical marijuana law approved by voters in 2004 to be abused.

A little-known, painful reaction to heavy use of potent marijuana is popping up in emergency departments, hospitals and clinics throughout the…

Helena dispensary reopens; Providers struggle to adapt to life after I-182

HELENA - Although a Dec. 7 ruling allowed medical marijuana dispensaries to immediately open, providers are struggling to get patients reautho…

The owners of the famous Dixon Melons plan on opening a coffee shop and medical marijuana dispensary in Missoula in the next few months, calli…

Bobby Long, sits in front of the counter Wednesday afternoon at Flower Montana, a medical marijuana dispensary he owns in downtown Missoula, where, he says, he'll be open for walk-in customers Thursday. A judge's ruling Wednesday that Montana's Medical Marijuana Initiative, abolishing the three-patient limit on dispensaries, should be effective immediately will provide his clients with much needed relief, he says. The limit "punished the patients and the sickest people in the state," Long says. "It helped the black market and hurts people who were trying to do the right thing."

George Zachary of The Marijuana Company, 2040 Harrison Ave., opened the dispensary doors, following a court ruling that the new medical marijuana law is effective immediately. He is pictured here on Wednesday.