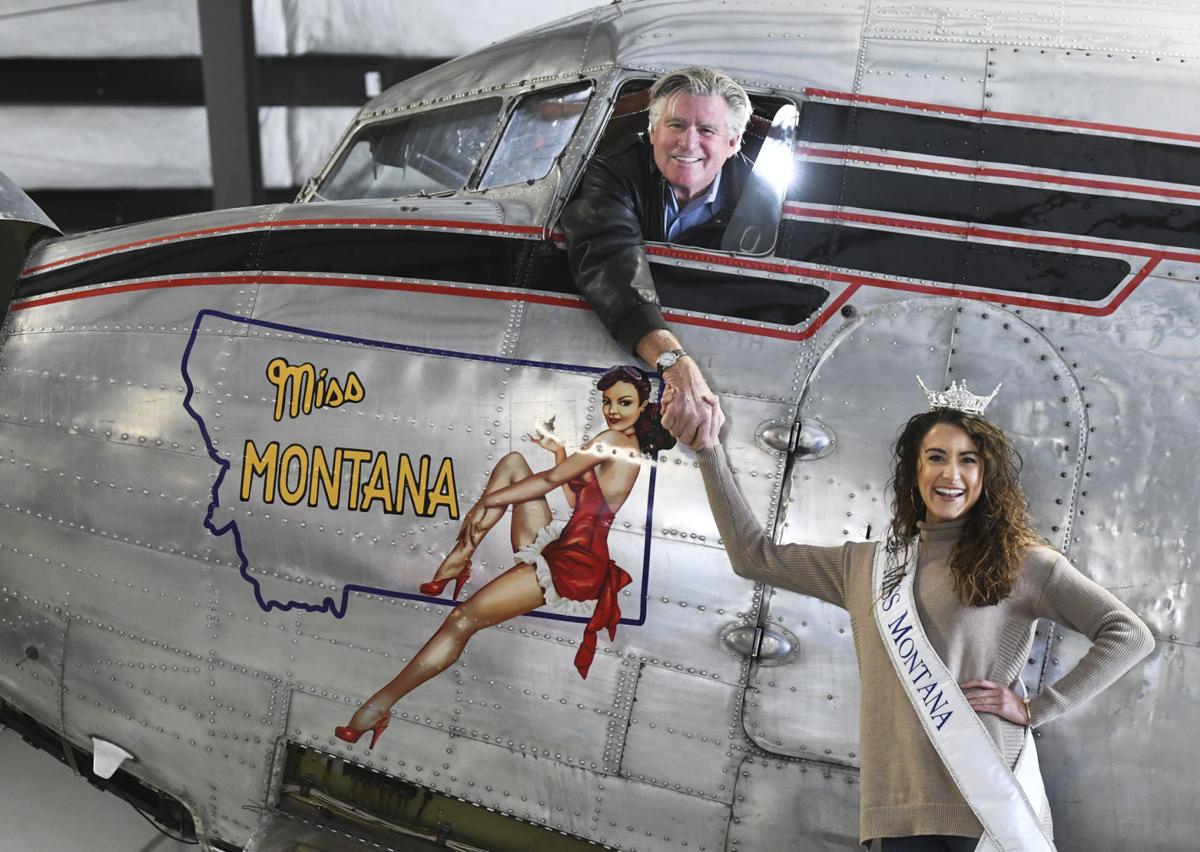 Treat Williams (left) shakes hands with Laura Haller, Miss Montana, from the window of the Douglas C-47 named "Miss Montana" on Friday at the Museum of Mountain Flying in Missoula. Williams is a veteran pilot and actor who'll be among those flying the plane to Normandy next June to commemorate the 75th anniversary of D-Day. 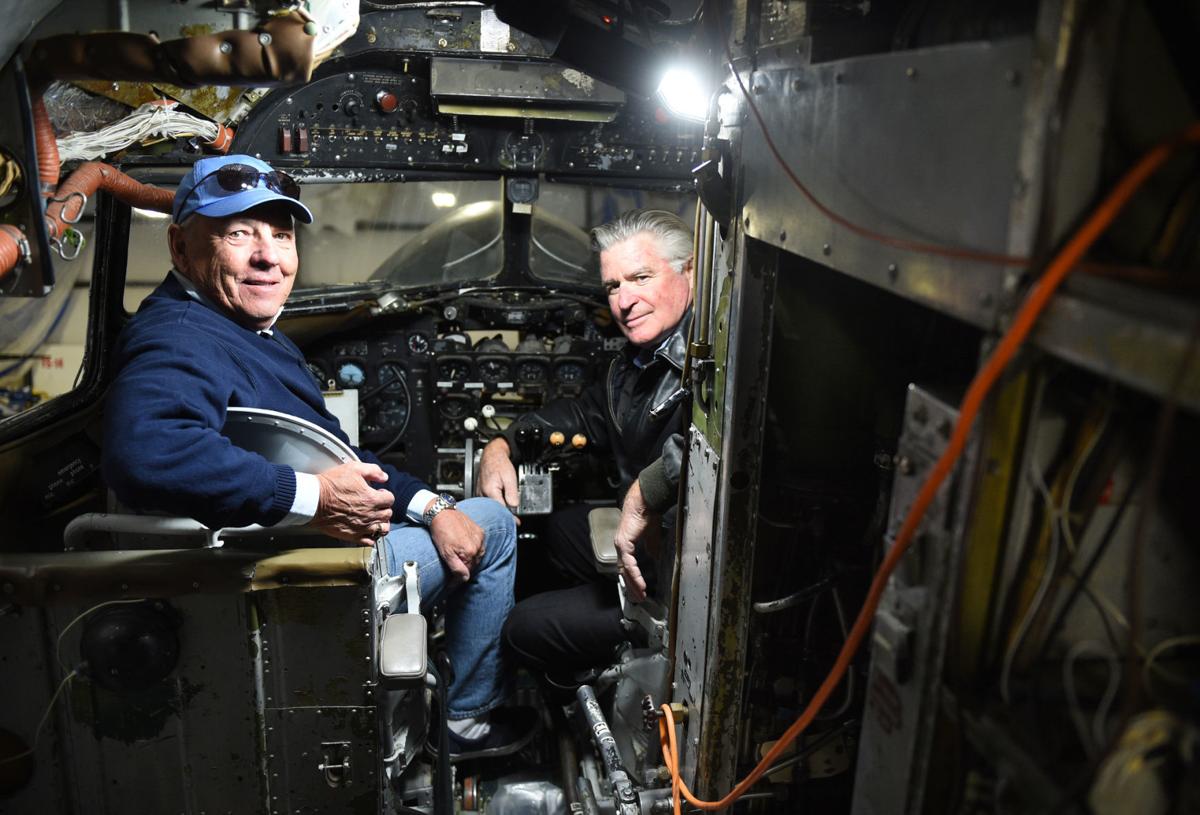 Pilots George Brennan (left) and Treat Williams sit in the cockpit of Miss Montana, the aircraft they and others plan on flying to France next June.

Treat Williams (left) shakes hands with Laura Haller, Miss Montana, from the window of the Douglas C-47 named "Miss Montana" on Friday at the Museum of Mountain Flying in Missoula. Williams is a veteran pilot and actor who'll be among those flying the plane to Normandy next June to commemorate the 75th anniversary of D-Day.

Pilots George Brennan (left) and Treat Williams sit in the cockpit of Miss Montana, the aircraft they and others plan on flying to France next June.

Like a giddy kid, veteran actor/pilot Treat Williams dropped into Missoula this week to help get the storied DC-3 “Mann Gulch” airplane off the ground and over to Normandy, France, next June for a massive, multinational commemoration on the 75th anniversary of D-Day.

“Probably my marriage, the births of my two children and now this are the most exciting events of my life,” Williams said Friday, sitting under the wing of the newly christened Miss Montana.

Williams, 66, has been a professional singer, dancer and actor since he joined the cast of "Grease" on Broadway 45 years ago, first as an understudy for Danny Zuko, then in the lead role from 1975 to 1978. That led to a starring role in the movie "Hair," the rock musical.

“And that pretty much jump-started everything,” he said. “It’s been a nice ride since then, and I’m lucky enough to make a living at it still.”

Williams finished shooting the third season of "Chesapeake Shores" for the Hallmark Channel this summer and is excited for the premiere of his most recent film, "Second Act." The romantic comedy stars Jennifer Lopez.

“It was a fun movie,” he said. “I saw it less than a month ago, and it’s good. In fact, it’s so good they were going to release it Thanksgiving Day and now they’re holding it 'til Christmas.”

Williams’ schedule is clear for the time being, so he jumped off the tractor at his “gentleman’s farm” in Vermont and flew his Aztec out to Montana to help stir up interest for next year’s adventure.

Miss Montana, the plane, is parked and partially dismantled inside the Museum of Mountain Flying hangar at the Missoula airport. When the engines get back from an overhaul in Puyallup, Washington, and the propellers are shipped in from Grangeville, Idaho, the mission to make the 1944 aircraft airworthy begins in earnest.

If successful, Williams will help fly it from the United States to Europe with dozens of other DC-3s, or C-47s when fitted out for military use. The British called the Douglas transport planes Dakotas, and the entire effort is called Daks Over Normandy.

Miss Montana, the person, met Williams and a knot of other pilots at the air museum Friday. Laura Heller of Helena, a week and a half back from the Miss America pageant in New Jersey, was recruited to the cause at a recent Missoula Farmer’s Market.

“She’s going to maybe help us promote this with some stops around the state,” said Eric Komberec, who’s heading up the “Miss Montana To Normandy” effort.

Miss Montana, the plane, was officially christened in June and its significance was revealed at the Aircraft Owners and Pilots Association regional fly-in in Missoula later in the month. Komberec’s grandfather, Capt. Malcolm “Mac” Enman of Drummond, flew in the Pacific theater during World War II. He nicknamed his B-25 “Miss Montana,” and the somewhat bawdy nose logo of the current one was designed to resemble that of Enman’s.

Komberec’s father, Dick, didn’t know Williams until recently. When the “Miss Montana to Normandy” project was in its infancy a few months ago, Komberec called on a friend George Brennan, a fellow retired Delta Airlines pilot with more than 10 years’ experience in international flying.

Brennan, who summers in Philipsburg and was once comedian George Carlin’s personal pilot, was on board to join the crew. It was his idea to reach out to Williams, a longtime friend and accomplished pilot.

Williams was all in from the moment Brennan pitched the plan. He got his pilot’s license when he was 17 and is a licensed flight instructor and commercial pilot, and has been flying twin-engine airplanes for 35 years.

He has flown an aircraft the size of “Miss Montana” just once — for 30 minutes.

“When I played D.B. Cooper in ‘The Pursuit of D.B. Cooper,’ we used the San Diego Padres’ 727,” Williams said. “The guys, when we were doing some aerial footage, said, ‘You want to fly right seat?’ And I said sure.”

Flying, Williams said, “is something that was always very solid in my life, very real, and balanced me out a little bit.”

But the mission to Normandy goes much deeper.

His father was a paratrooper in the 82nd Airborne during World War II. Williams was named for his Uncle Treat, who died at 19 when the B-17 on which he was gunner crashed in Italy in 1943. Another uncle escaped from a German prison camp, returned to his unit and fought the rest of the war.

And the late Charles Durning, who played Williams’ father in the television drama series “Everwood,” was a D-Day survivor.

“Part of this is me honoring the folks that I was close to that made it possible for me to have the life I’ve had,” said Williams, who’ll pack his Uncle Treat’s Purple Heart and the letter his grandmother received after the crash in his flight suit next June.

“I never served, and I think this is such a great thing being done, to honor those guys who hit the beaches on D-Day. I think that’s pretty cool.”