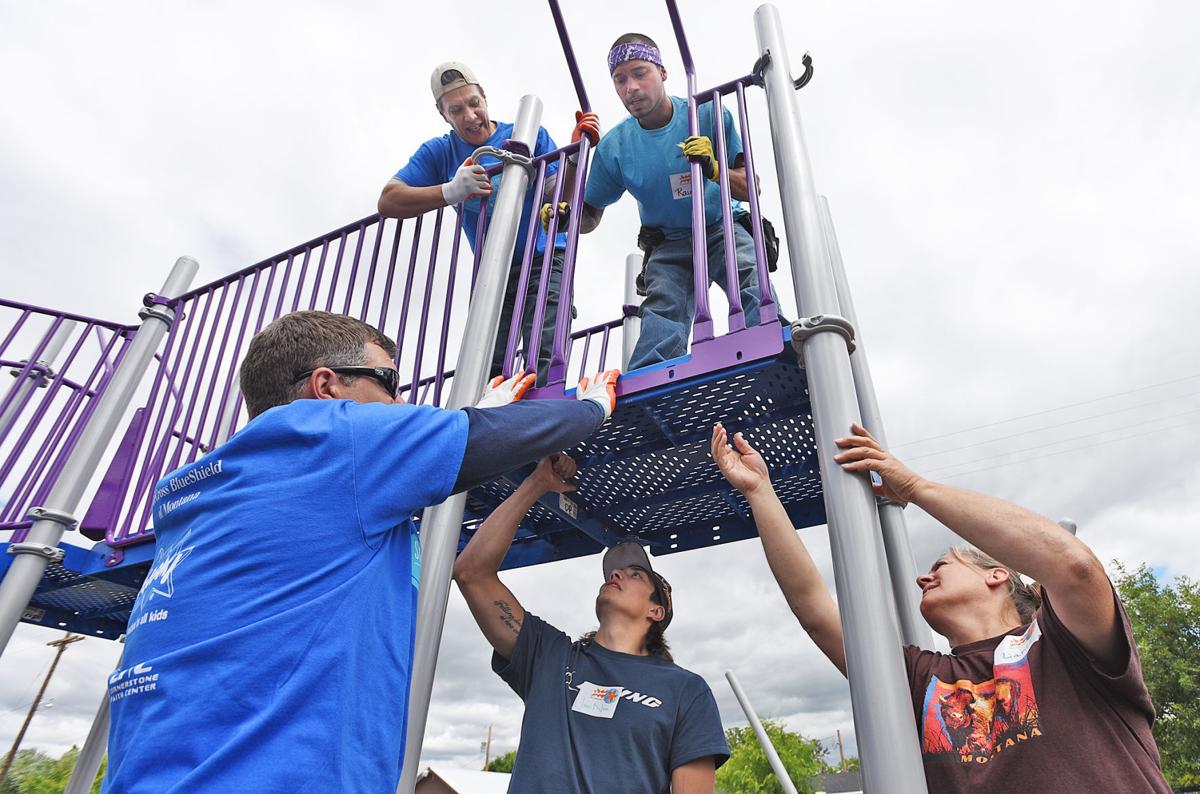 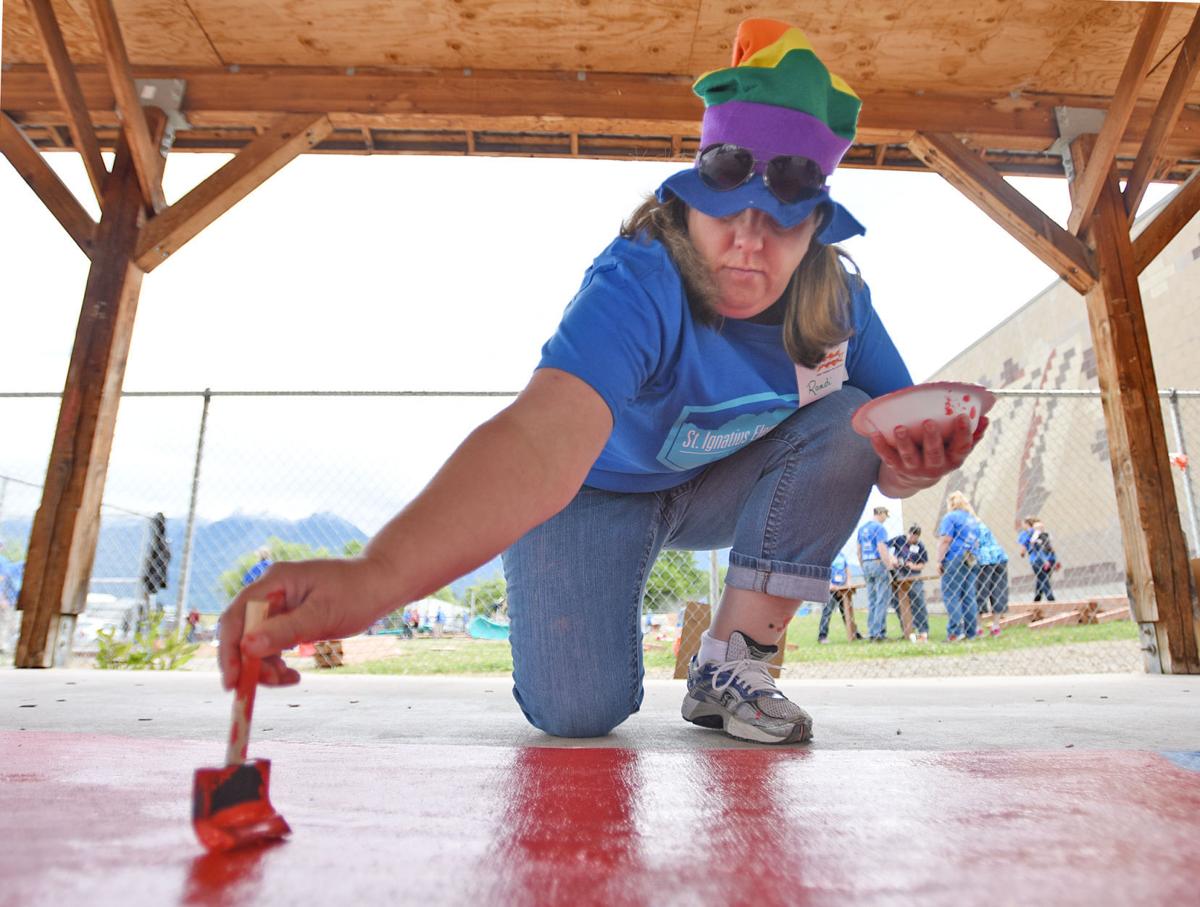 Randi Heigh lays a fresh coat of paint on a life-size map of the United States. The playground was the third built by Blue Cross and Blue Shield of Montana and KaBOOM!. 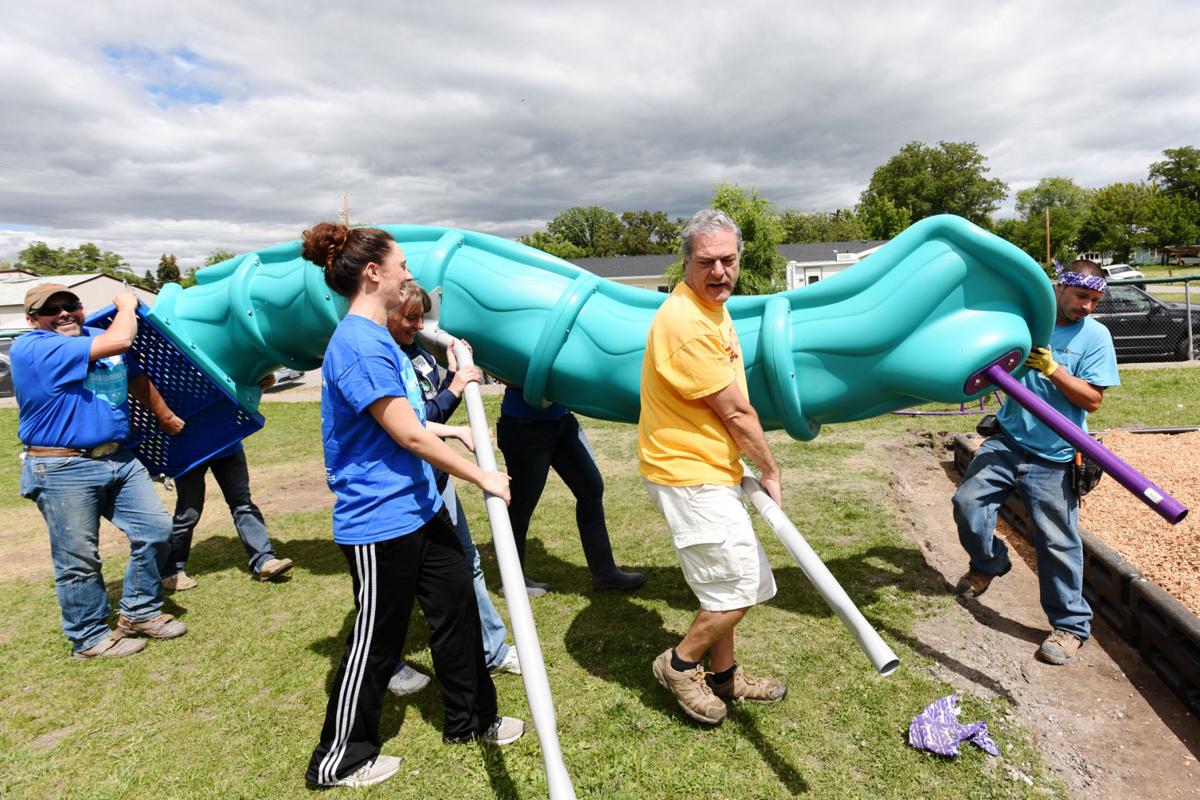 ST. IGNATIUS – It wasn't a monstrous slide or high-flying swings that Kristin Karcsh remembers from her childhood playground.

What sticks in her memory is, what seems to her today, an unremarkable metal climbing structure.

"There was this one piece of equipment that is probably totally illegal now, looking back, but it was the '90s," said Karcsh, senior project manager for KaBOOM!, based in San Francisco. "It just looks like metal to you and I, but in there, my friends and I could make a cardboard box fly."

Karcsh and about 150 other volunteers swarmed the St. Ignatius Elementary School campus Saturday, hoping to foster that kind of imagination and wonder for the town's children with a new playground.

KaBOOM!, a national nonprofit centered on kids staying active, partnered with Blue Cross and Blue Shield of Montana to make this project a reality –something they've done for the past two years in Billings and East Helena.

"This is one of the weekends we look forward to every year with KaBOOM!," said Blue Cross and Blue Shield of Montana communications assistant Jesse Zentz. "The folks of St. Ignatius opened their arms to us."

Saturday's playground build – a from-scratch effort that took around four hours – was the first that KaBOOM! had done in western Montana, Karcsh said.

"We surveyed the state and we wanted to spread out the love a little bit," Zentz said. "This is a special one. Helena's was in our backyard, and Billings is a larger community. But this is the first time we've done this in a small town. And the community buy-in is incredible."

The build "brought people out of the woodwork," he said, from Blue Cross staff out of the Helena, Missoula and Kalispell offices, to the school community to Cornerstone Faith Center members to people who just wanted to help. St. Ignatius Elementary School Principal Dan Durglo watched one truck pull in and out popped a Missoula man and his children, who had heard the buzz and wanted to lend a hand.

They mixed enough concrete to equal the weight of two Asian elephants, and carried enough mulch to cover half a basketball court.

Blue Cross provided 90 percent of the funding. St. Ignatius had to come up with the last 10 percent: $8,000. That came from years of fundraising, Durglo said.

"We had some older equipment that we pulled out several years ago. We had nothing out here but those two play structures," he said, pointing to two small, blue pieces of equipment.

"I can't even express in words how much this means to us," he said. "We haven't had this kind of apparatus. And zombie tag and wall ball only go so far."

They all agreed: Playgrounds are essential.

St. Ignatius' schools serve about 500 students, and Durglo said there are 800 to 850 children total in the community. Nearly 70 percent of the student population is Native American, according to the National Center for Education Statistics. The town sits on the Flathead Indian Reservation.

"Economically, the community struggles," Durglo said. And the town grapples with "societal ills" that plague small towns and Native American communities, he said, such as substance abuse.

Saturday, and the upcoming week, are bittersweet for him. He's leaving his post in the schools to take a job as vice president of academic affairs at Salish Kootenai College.

"My heart is happy today," he said, looking out at the sea of volunteers. "But I'm happy and sad, at the same time, to leave. I grew up here, I went to school here."

After a brainstorming session in St. Ignatius in April – during which those who'll use the playground the most, the children, got a say in what it would look like – KaBOOM! designers took the feedback and came up with three designs. The community got the final say.

"Kids are going to draw what they know, but if you dig a little deeper, you can find what they want," Karcsh said. "They wanted spinning and a lot of climbing pieces."

It wasn't all construction. Other volunteers grabbed buckets of paint for a map of the U.S. under the pavilion, freshening up the basketball court and four-square areas and painting other areas.

"Play can teach kids a lot of life lessons that they won't learn in a classroom: social skills, physical strength, coordination, courage," Karcsh said. "One of my favorite quotes is by Albert Einstein: 'Play is the highest form of research.' "

KaBOOM! does playground projects across the country, in small towns like St. Ignatius and sprawling cities like Chicago.

"In Chicago, no one has a wheelbarrow or a shovel," Karcsh said. "Why would they? But here, everyone has tools.

"Montanans know how to build things, which makes my job easier."

"Here, you might have to drive to Missoula to see a cool playground," she said. "In Chicago, there might be one just six blocks away, but you have to cross a busy street to get there."

Zentz spotted kids outside the school on Thursday as crews started setting up for the weekend build. Their excitement was obvious, he said.

"From our perspective, it keeps kids healthy and encourages active lifestyles," he said. "It's for their health and wellness, and it's safe and fun.

"You don't have to tug at a kid's hand to get them to go to a playground."

ST. IGNATIUS – Asked to become playground designers this week, children at St. Ignatius Elementary School drew ones with slides and swings … a…

ST. IGNATIUS – One of the most entertaining newsrooms in Montana is led by children.

We all have our own ideas about what makes a terrific high school coach.

Hellgate Elementary will ask its voters to support a facility expansion bond measure this fall.

There's a new superlative to describe Montana – "most improved."

EAST MISSOULA – The Feed the Need food truck was pumping out nachos after church on Sunday, leftovers from Saturday's taco feast.

Ann Deister zipped into the Missoula County Fairgrounds parking lot on Sunday afternoon, her golf cart bumping along as hundreds of dogs strut…

Mother Nature left us the blueprints. Now, the Biomimicry Institute says humans need to develop products based on her designs in order to solv…

Miniature scientists donned safety gloves and goggles Tuesday morning, giddy as they combined chemicals in a University of Montana laboratory.

The new leaders of Sunflower Montessori already have a fundraising idea: showing kids that by night, their parents sometimes turn into rock stars.

Randi Heigh lays a fresh coat of paint on a life-size map of the United States. The playground was the third built by Blue Cross and Blue Shield of Montana and KaBOOM!.