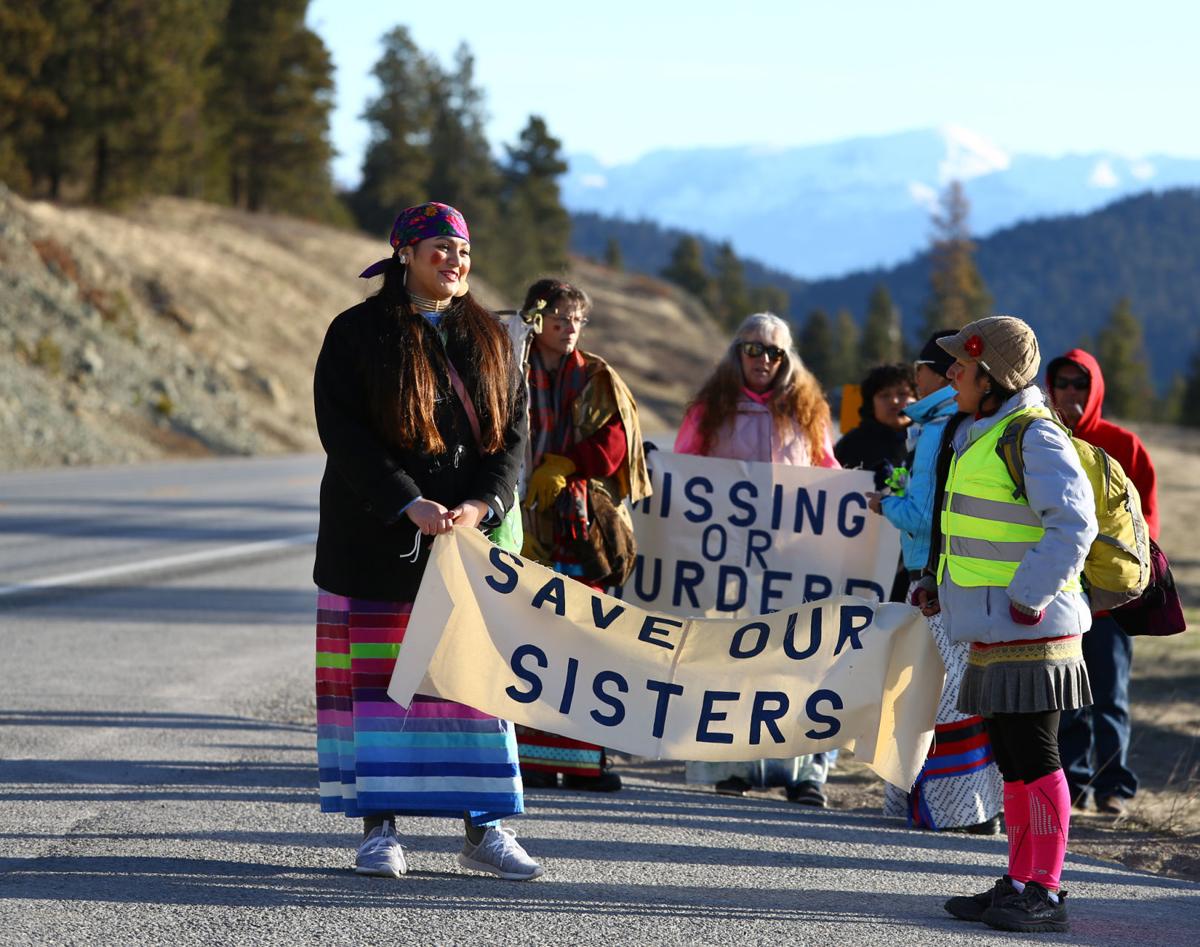 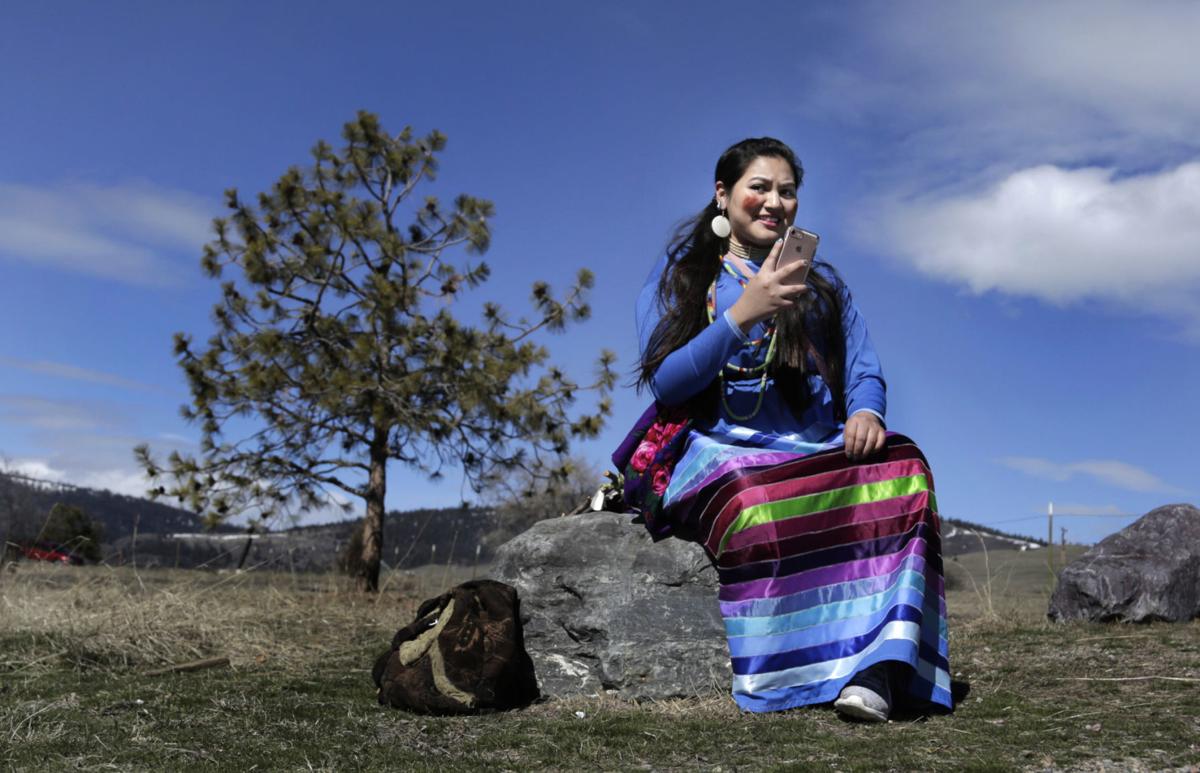 Growing Thunder rests after reaching the halfway mark on the first day of her 80-mile walk across the Flathead Indian Reservation. 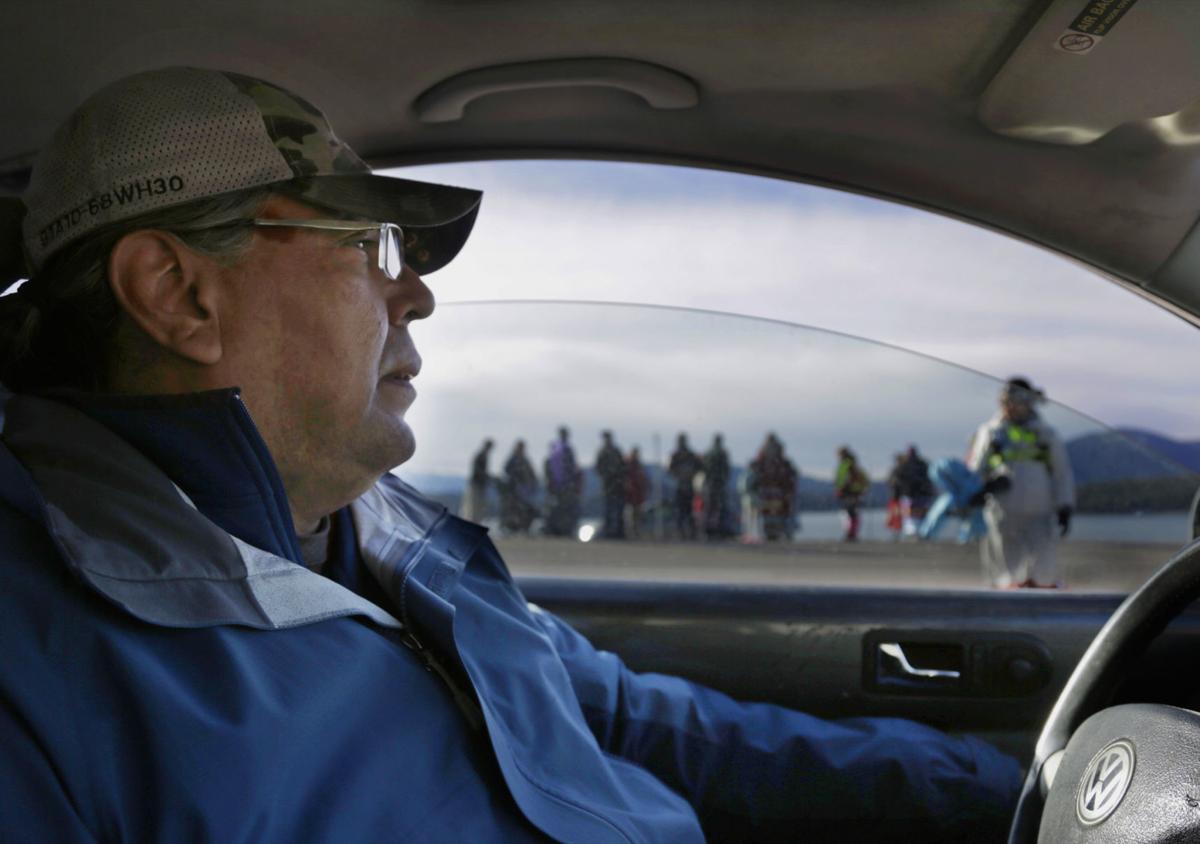 John Crawford from the Local Indigenous Network Collective, drives ahead of the group of walkers and pulls over periodically to make sure the group has everything needed during its walk from Rollins to Polson on Sunday. 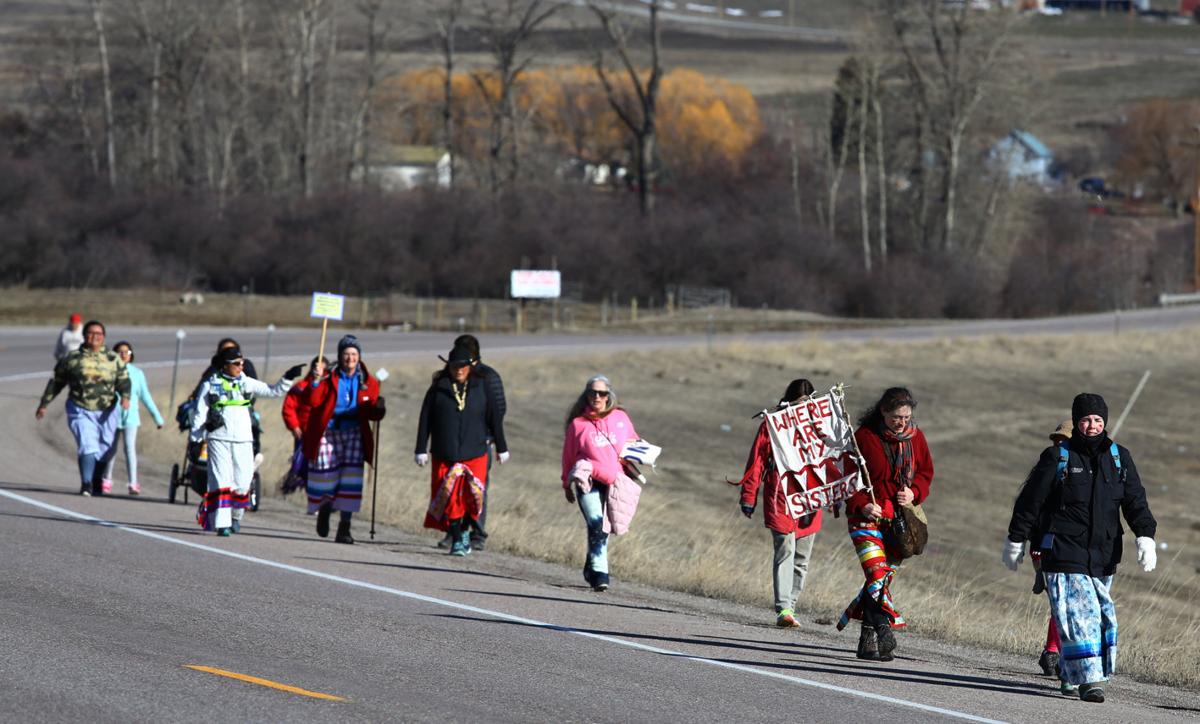 A group of supporters continue their journey walking down Highway 93 outside of Elmo on Sunday.

Growing Thunder rests after reaching the halfway mark on the first day of her 80-mile walk across the Flathead Indian Reservation.

John Crawford from the Local Indigenous Network Collective, drives ahead of the group of walkers and pulls over periodically to make sure the group has everything needed during its walk from Rollins to Polson on Sunday.

A group of supporters continue their journey walking down Highway 93 outside of Elmo on Sunday.

ELMO — As the sun peeked over the Mission Mountains, revealing the snow-capped peaks and reflecting off the water of Flathead Lake, Marita Growing Thunder and a group of about 20 people gathered at the northern entrance sign to the Flathead Indian Reservation near Rollins.

The morning began with a prayer and traditional offerings of tobacco were made before Growing Thunder started her 80-mile trek from the northern reservation boundary to Arlee to raise awareness for Missing and Murdered Indigenous Women (MMIW).

Following a day where thousands of people walked in demonstrations across the country as part of the March For Our Lives movement, this is the second straight year Growing Thunder started her walk for the estimated thousands of MMIW in the United States and Canada.

While many students use spring break for vacation, Growing Thunder is using her time off with the hopes to shed light on the less-publicized issue.

"Missing and Murdered Indigenous Women is such a crisis, it's everywhere, everyday," Growing Thunder said. "Thousands of families (are affected)."

Although the United States does not have a database on MMIW and Canada has started an inquiry in recent years, one in three Native women will be raped in her lifetime and three out of five will be physically assaulted, according to statistics from the U.S. Department of Justice.

Growing Thunder began the project during her senior year at Polson High School after attending an art program at Wesleyan University in the summer of 2016. She said the program asked all the attending students to do an art project to bring back to their communities and she felt the Western art they wanted her to go into wasn't appropriate for this issue.

So she did some research, discussed it with her family and eventually decided she would hand-sew a new ribbon skirt or dress each night and wear it to school the next day to honor MMIW.

"She even made a prom dress that was in the same style and wore her moccasins to her prom," Growing Thunder's mother, Shannon Ahhaitty said. "It just became all consuming."

This issue is very personal to Ahhaitty, who had an aunt and sister who were murdered. Although she never met her aunt, she said her father would talk about his sister every day.

"So when she came home wanting to raise awareness about this crisis, I was suprised," Ahhaitty said. "I talk to my girls about it all the time, never put a name to it and didn't really know my family was so entrenched in the paradigm of this crisis."

Growing Thunder is now a freshman at the University of Montana studying art and pre-medicine. She continues to make and wear her ribbon skirts and dresses to class.

"When you wear a skirt, you don't wear it for beauty. You wear it to be your honest, true self," Growing Thunder said.

As the sun climbed higher in the sky, the brisk morning temperatures gave way to what became a beautiful, early-spring day with a light breeze coming off the lake. Cars honked in support as they drove by on Highway 93, with Growing Thunder leading the way while occasionally holding a banner that read, "Save Our Sisters."

Halfway through the first leg, the group had waned to a core group of seven or eight people. Among them was Growing Thunder's mentor Joanne Morrow, whom she had met through Upward Bound, a college prep program for high school students from low-income families.

"She was wise beyond her years, an old soul, with vision and grace and intelligence," Morrow said of Growing Thunder. "I've always been really impressed with Marita and I knew she would do great things."

Another woman traveled all the way from Los Angeles to take part in the walk with Growing Thunder. For 25 years, Kristin Burke worked on designing costumes for movies and when she heard about Growing Thunder's art project on Facebook, she said she felt like she had to help out.

"I missed the walk last year and I was like, 'I'm not going to miss it this year,'" said Burke, who plans to walk with Growing Thunder all four days.

After a death of a family member, natives often make a sacrifice in mourning, although it may be different from tribe to tribe. These sacrifices might include women cutting their hair or not participating in ceremonies for a set period of time.

Growing Thunder looks at the walk as a modern sacrifice to bring healing and awareness, even though the issue may be uncomfortable for some people.

"I think that we've been silenced for so long, we as native people and we're at this point in time where we're supposed to be the seventh generation. We're supposed to be healed from all this colonization by now," Growing Thunder said. "We're far from healed and so we have to take it into our own initiative to start healing."

Day two of the 80-mile jaunt will go from Polson to Ronan, with days three and four going from Ronan to Mission and Mission to Arlee, respectively.

As she continues to grow awareness for MMIW, Growing Thunder ultimately hopes to turn the project into a non-profit organization to help raise funds for families of MMIW.

When asked if she learned anything from last year's walk, Growing Thunder replied, "better shoes, better weather and pace yourself, I guess."

An employee at the Pita Pit, a fast-food restaurant in downtown Missoula that caters to the late-night crowd, has been fired after a video sho…