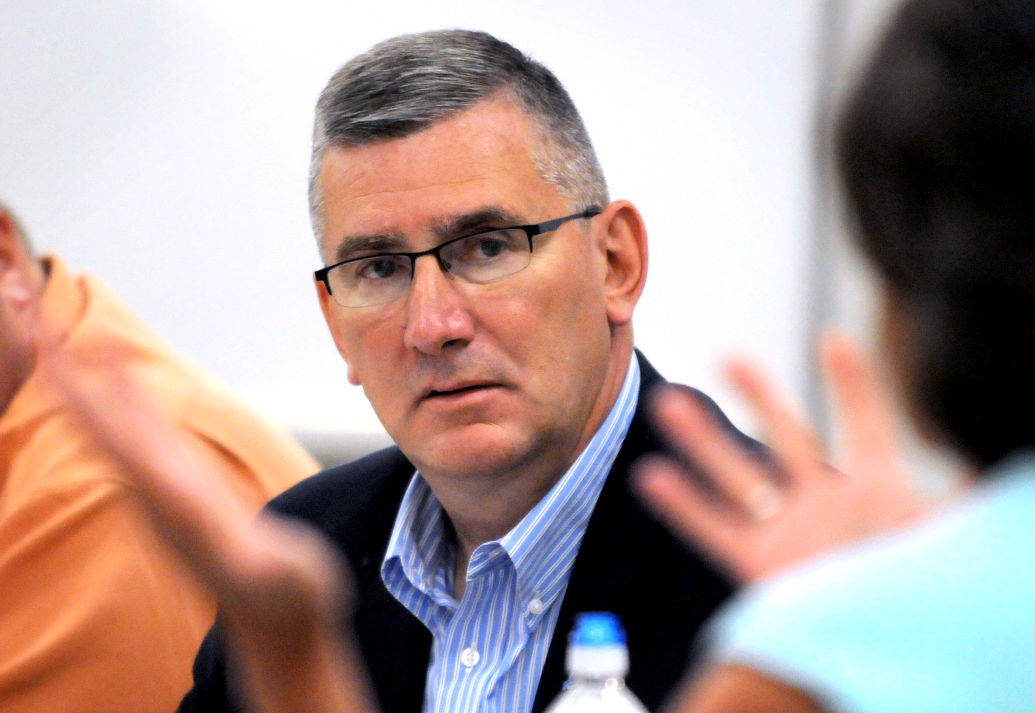 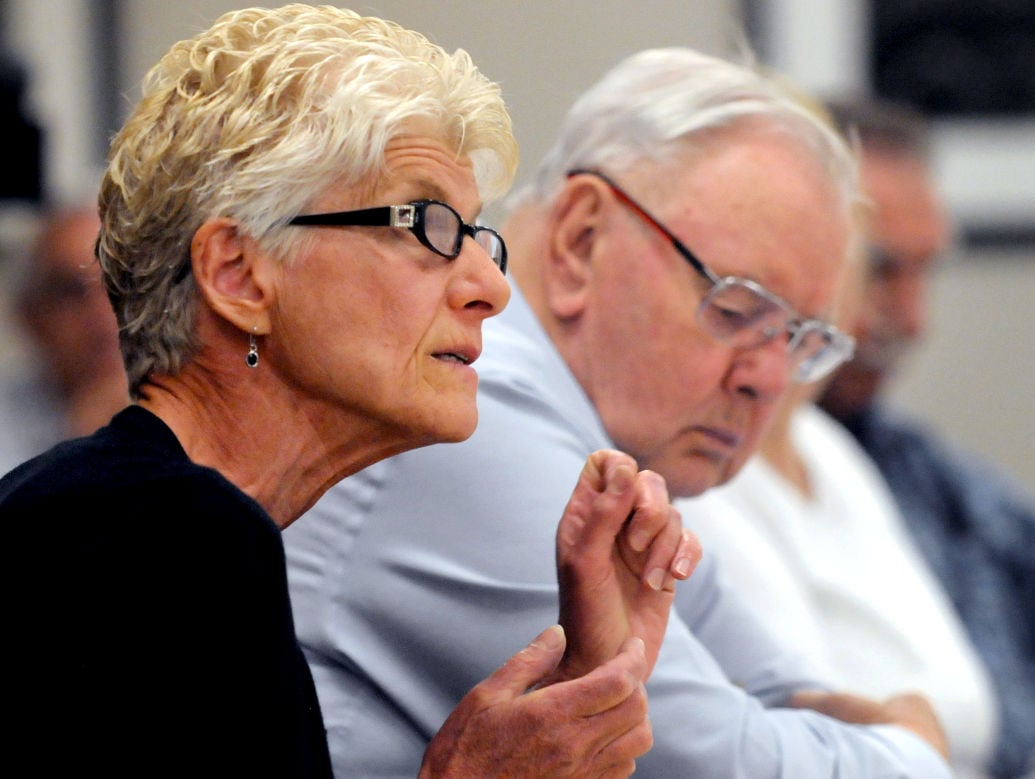 Mary Olson, who retired after 29 years working with the Social Security Administration, told Walsh that she doesn’t think closing field offices and forcing people to deal with Social Security issues online will work. “The majority of rural America does not know how to use an online system, and it won’t work,” she told Walsh.

Doing his best to avoid discussing the recent plagiarism scandal that forced him to drop out of the upcoming U.S. Senate race, Sen. John Walsh visited Missoula on Tuesday morning as part of his statewide listening tour focused on Social Security and Medicare.

In a panel discussion at the First Interstate Bank building downtown, Walsh met with Mayor John Engen and a group of community leaders who work with the elderly and the poor. Walsh recently co-sponsored the Social Security Protection Act, which would eliminate the cap on taxable income to extend the Social Security program for an additional 16 years beyond the current projected date of insolvency in 2033, when it is expected revenues will no longer be adequate to pay benefits to an aging population. Currently, no income beyond the first $117,000 is subject to taxation for Social Security.

Walsh listened to concerns from the panel on a host of issues related to Social Security, then afterward deflected questions from the media about why he plagiarized a hefty portion of his master’s thesis at the U.S. Army War College, as first reported by the New York Times. He declined to give any specific reason for why he apparently plagiarized, instead talking about his military record and his desire to move forward from the issue.

Walsh got an earful from the panel about problems with the current Social Security program and how eligible citizens sign up to receive benefits.

Mary Olson, who worked for the Social Security Administration for 29 years and now works for Missoula Aging Services, told Walsh the plan to move the program entirely online in 11 years, called “Vision 2025,” is destined for disaster.

“The majority of rural America does not know how to use an online system, and it won’t work,” she said. “There is no simple part of Social Security. I wasn’t a social worker, but I became one working for the Social Security Administration. There are so many twists in the system. Even something as simple as putting in what date you want your benefits to start is extremely complicated if you don’t know all the information.”

Olson recalled the story of one woman who didn’t realize she was eligible for $700 a month more in benefits because she had been married 40 years earlier.

“These are people that are facing end-of-life issues, they are destitute and they aren’t getting the benefits they need,” she said. “That’s a travesty in my opinion.”

“There’s no quality control or accountability any more,” she said. “Back 10 or 20 years ago, we were focused on customer service. You couldn’t be rude with somebody. It’s all different now. The SSA needs a look, like the Department of Veterans Affairs got. It’s time to look into it, because the same things are going on.”

Susan Kohler, the CEO of Missoula Aging Services, was pointed in her remarks to Walsh.

“The overall concern I have is Congress is not addressing the issue that our society is rapidly aging,” Kohler said. “Montana is going to be fifth per capita by 2025 in terms of aging. Our state is in danger. I must say that local (government) is doing a great job of acknowledging it, but they can’t compensate for everything that the federal and state government is not doing. The bigger issue is they’re focused on the deficit and they’re throwing the baby out with the bath water.”

Kohler said that to her, the biggest issue is Congress focusing on the budget, separate from the reality of people’s everyday lives.

“It’s not a cookie-cutter approach,” she said. “Everybody has their own story, their own issues and, for the most part, everybody is working hard to do the best they can and raise a family and be a productive member of society to get to the place where they’re an older adult and trying to access their benefits.”

Kohler said the demise of Social Security has been greatly exaggerated.

“As far as I know, Social Security is going to be solvent for at least the next 20 years and will be able to pay out about 75 percent of its benefits over a longer period of time,” she said. “So what are the proposals to fix Social Security? First of all, Congress needs to stop scaring people by telling people it’s an insolvent system and therefore it’s going to crumble, like, tomorrow. The question is why have a cap at all? So after you make $117,000, something I will never see, then they stop taxing people. That would be a fix. We all in this room should expect to live to 100, whether we want to or not. That’s just the reality. We’re struggling to finance what that means. All of the agencies in this room do an excellent job as far as the expertise of volunteers, but we can only go so far with that.”

Kohler said that members of Congress are generally wealthy and don’t relate to common people.

“Congress, as you know, is dysfunctional,” she told Walsh. “I think everyone can agree on that. They can’t make a decision on anything. In the meantime, they come up with these fixes like supposedly going online for Social Security?”

Mayor John Engen, who can always be counted on for comic relief, made the only reference to Walsh’s political troubles during the panel.

“Have you thought about asking (Kohler) if she’d run for Senate?” Engen quipped to Walsh, drawing laughter from the room.

Walsh said the bill he is co-sponsoring would prevent millionaires and billionaires from escaping Social Security taxes.

“If you’re making $1 million or $5 million or $10 million, you pay on that first $117,000 but after that you don’t pay,” Walsh explained. “This bill will make everybody pay their fair share. And that should increase the longevity of the Social Security program by about 12 to 14 years without any problems. I support that. These are good programs. People have paid into these programs and expect these programs to be there when they retire. We need to make sure they are. This is a priority of mine. I’m making sure I do whatever I can in the time I have remaining in the Senate to push these programs, to strengthen these programs.”

At the end of the panel, Walsh answered questions from reporters, most of which dealt not with Social Security but his plagiarism scandal. He declined, however, to go into depth on why he allegedly plagiarized.

When asked if the turmoil surrounding his political campaign had personally affected him or his family, Walsh referenced his combat tours in Iraq as well as his son’s service in the military, saying he had dealt with tougher times before.

“I commanded an infantry battalion in Iraq and lost four soldiers while I was there,” he said. “I lost another soldier when I came home. He died by suicide. I’ve made mistakes in the past, and I will more than likely make mistakes in the future. But I’ve learned growing up in Butte, Montana, that when you make a mistake, get knocked down, that you pick yourself up, dust yourself off and move on. And that’s what I’m going to do. I’m going to finish this term in the U.S. Senate very strong.”

Reporter David Erickson can be reached at david.erickson@missoulian.com.

With clock ticking, Walsh hopes to advance bills while still in Senate

Your daily look at news, upcoming events and the stories that will be talked about today.

Walsh says he has no regrets about U.S. Senate race

As John Walsh looks toward his final weeks as a U.S. senator, he says he has “no regrets” about his aborted run for a full term – and that he …

HELENA – “The Dude” for U.S. Senate in Montana? As in Oscar-winning actor Jeff Bridges, sometime Montana resident and iconic stoner from “The …

As many as 154 delegates can select Walsh replacement on U.S. Senate ballot

HELENA – As many as 154 Democratic Party delegates, from elected officials to local party chairs, can vote this Saturday on who will replace S…

Walsh drops out of race for U.S. Senate

HELENA – Montana Sen. John Walsh said Thursday he was pulling out of the Senate race because his campaign was distracted by the controversy ov…

Mary Olson, who retired after 29 years working with the Social Security Administration, told Walsh that she doesn’t think closing field offices and forcing people to deal with Social Security issues online will work. “The majority of rural America does not know how to use an online system, and it won’t work,” she told Walsh.